Qatar has identified the parents of a baby girl dumped at its airport which sparked internal examinations of innocent female passengers in a bid to find the mother.

The public prosecutor said the mother, identified as having Asian nationality, had told the father that she had dumped the newborn before she boarded a plane.

The premature girl was found alive in a bin at the Hamad International Airport in Qatar on October 2. The Qatari government assured the baby was taken care of by social workers in Qatar.

A number of medical professionals cradle the baby (pictured) which was found at the Hamad International Airport, prompting an invasive strip search. Pictured: The ambulance crews were seen tending to the baby, who was wrapped in a blue blanket, inside the airport terminal

The mother, who is overseas and faces 15 years imprisonment, is referred to as a ‘convict’ in a statement by the prosecutor after efforts were underway to ‘to arrest the fugitive’ which suggests she may have been convicted in absentia.

The prosecutor said: ‘Investigations revealed that the infant’s mother… threw the newborn infant in the trash can in one of the toilets in the departures lounge at the airport and boarded the plane to her destination.

‘[The mother] had a relationship with another person of the nationality of one of the Asian countries as well, and this relationship resulted in the infant that was found. 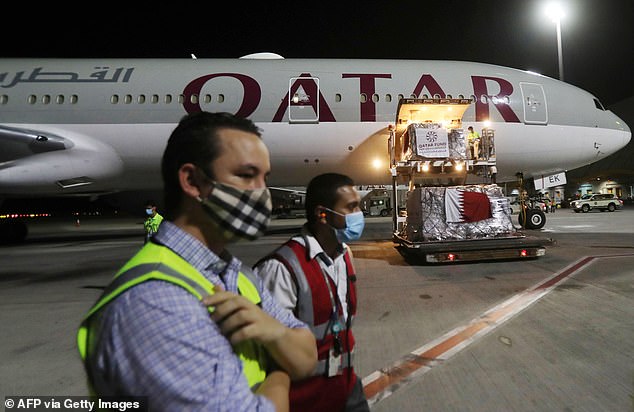 The Qatari government assured she was safe and in the care of social workers in Qatar. Pictured: A Qatar aircraft is seen at Doha’s Hamad International Airport

‘The father of the infant admitted that he had a relationship with the infant’s mother, and that she had sent him a message and a photo of the newborn infant immediately after her birth.’

The mother had told the father that she had dumped the baby and departed the country, the statement added, while DNA screening proved they were the child’s parents.

All expatriates coming to Qatar for long-term work are required to give a substantial sample of blood during the registration process. 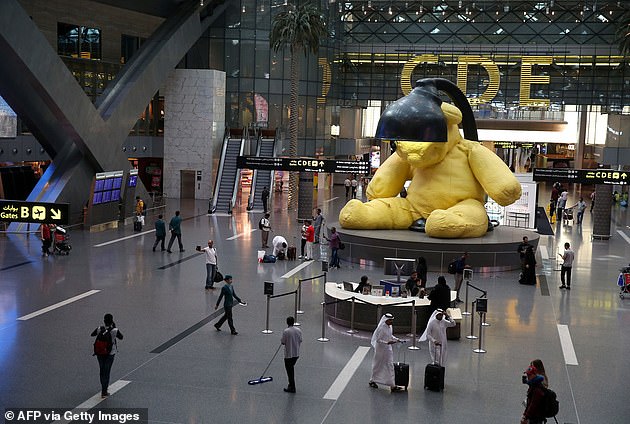 Women on ten Qatar Airways flights out of Doha, including one to Sydney, were subjected to the examinations following the incident on October 2, leading to a diplomatic row with Australia. Pictured: Hamad International Airport in Doha

It comes after women on ten Qatar Airways flights out of Doha, including one to Sydney, were subjected to the examinations following the incident on October 2, leading to a diplomatic row with Australia.

Up to 18 Australian women were forced to undergo an invasive vaginal exam to determine if any of them had just given birth.

Authorities pulled the women off flights and forced them to remove their underwear to undergo a non-consensual medical examination in an ambulance on the tarmac. 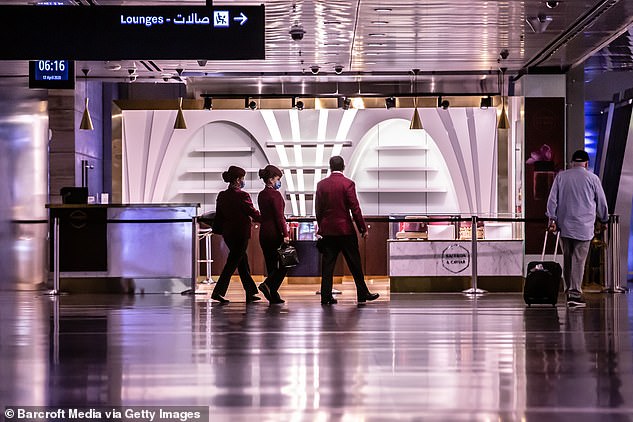 The footage surfaced just hours after the Qatari government confirmed it would launch an immediate inquiry into the strip searches, following worldwide outrage. Pictured: Staff at Hamad International Airport

CCTV footage released by Doha News shows five male paramedics holding the baby after removing her from the bin in what police believe was attempted murder.

The medics were seen tending to the baby, who was wrapped in a blue blanket, inside the airport terminal.

The footage surfaced just hours after the Qatari government confirmed it would launch an immediate inquiry into the strip searches, following worldwide outrage.

The government said while the aim of the urgent search was to find the mother of the child before she was able to fly out.

The incident only came to light weeks after it occurred, when affected Australian passengers spoke out, with Canberra labelling the episode ‘appalling’.

The public prosecutor said ‘some employees’ of airport security had broken the law by ordering the searches. 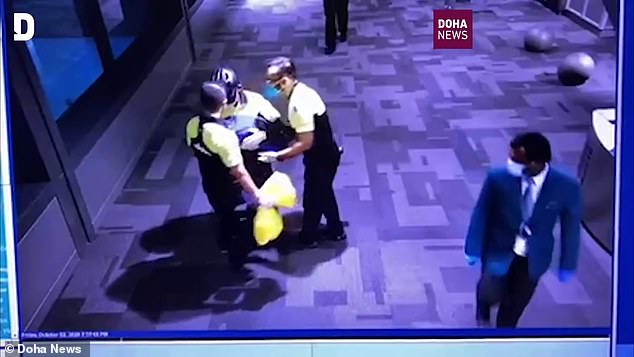 The public prosecutor said ‘some employees’ of airport security had broken the law by ordering the searches, which Qatar only apologised weeks after they took place, and face three years imprisonment.

It gave no details of how senior those charged were, or how many would be punished.

Diplomats have suggested that such a major operation requiring the suspension of flight operations at the authoritarian state’s airport could not have been authorised by a handful of junior staff.

Qatar is an ultra-conservative Muslim monarchy, where sex and childbirth outside of marriage are punishable by jail.

Ahead of the 2022 World Cup in Qatar, it has struggled to reassure critics that its promises on women’s rights, labour relations and democracy are credible.

Prime Minister Sheikh Khalid bin Khalifa bin Abdulaziz Al-Thani, who as interior minister is also responsible for the security services, previously tweeted that ‘we regret the unacceptable treatment of the female passengers’ at Doha airport.

‘The state of Qatar regrets any distress or infringement’: Statement from Qatar government

On 2 October a newborn was found in a trashcan concealed in a plastic bag and buried under garbage at the Hamad International Airport and the baby was rescued from an appalling attempt to kill her and the infant is now safe under medical care in Dohar.

This was the first instance of an abandoned infant being found in such condition at the airport and is egregious and life-threatening violation of the law triggered an immediate search for the parents, including on flights within the vicinity of where the newborn was found.

While the aim of the urgently decided search was to prevent the perpetrators of the horrible crime from escaping, the state of Qatar regrets any distress or infringement on the personal freedoms of any traveller caused by this action.

His Excellency of Qatar, the Prime Minister and Minister of interior of the state of Qatar has directed that a comprehensive transparent investigation into the incident be conducted.

The results of the investigation will be shared with our international partners. The state of Qatar remains committed to ensuring the safety and security and comfort of all travellers transiting through the country.