Ruffling some feathers! Queen Maxima of the Netherlands sports multicoloured dress with statement sleeves to attend a memorial concert with King Willem-Alexander in Amsterdam

Queen Maxima of the Netherlands showed off her sartorial prowess as she stepped out in  a stylish get up tonight to attend a concert with her husband King Willem-Alexander and the Dutch Prime Minister in Amsterdam.

The royal, 50, travelled to the Royal Theatre Carreto attend the Liberation Concert with her husband, 55 and Mark Rutte, also 55.

The annual concert, which commemorates the end of the Nazi rule over The Netherlands was taking place for the first time since the beginning of the coronavirus pandemic tonight.

For the occasion, the Queen dressed to the nines in a satin floral midi dress with statement feathered sleeves.

The colourful number, which reached to her knees was in her signature bright colours with a floral pattern in yellow, blue, red and orange. 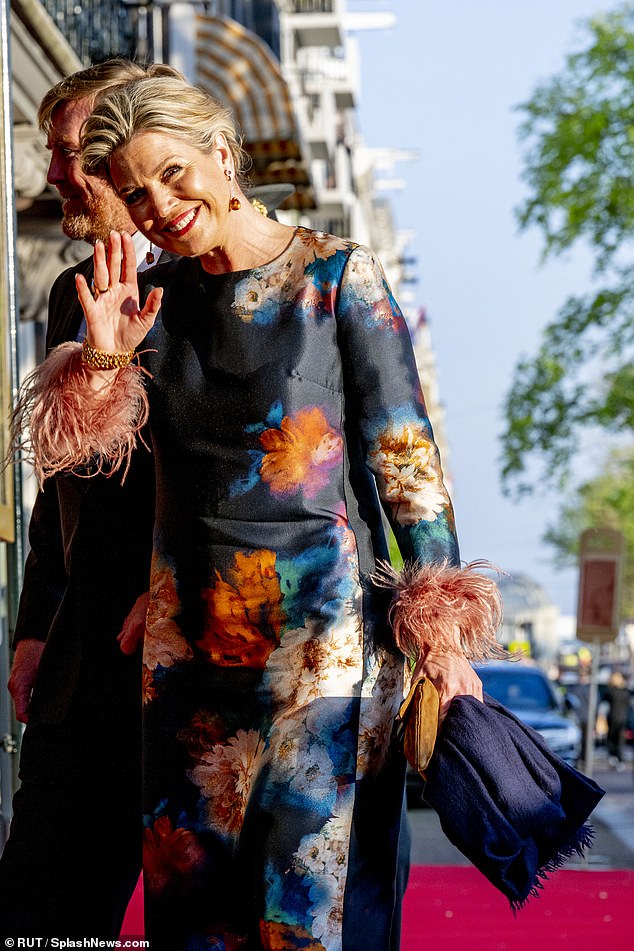 For the occasion, the Queen dressed to the nines in a satin floral midi dress with feathered sleeves.

She paired it with brown suede stilettos in black and a orange clutch bag, which matched a pair of pendant amber earrings and the amber bracelet she picked for her jewellery.

Her blond locks were styled into a glamourous up do that caught the sunbeams as the sunset on the Dutch capital.

Her makeup was glamourous, with some bronze highlighting her natural glow and mascara and eyeliner bringing the focus to her hazelnut eyes.

She sported a rosy pink lipstick that completed the look. 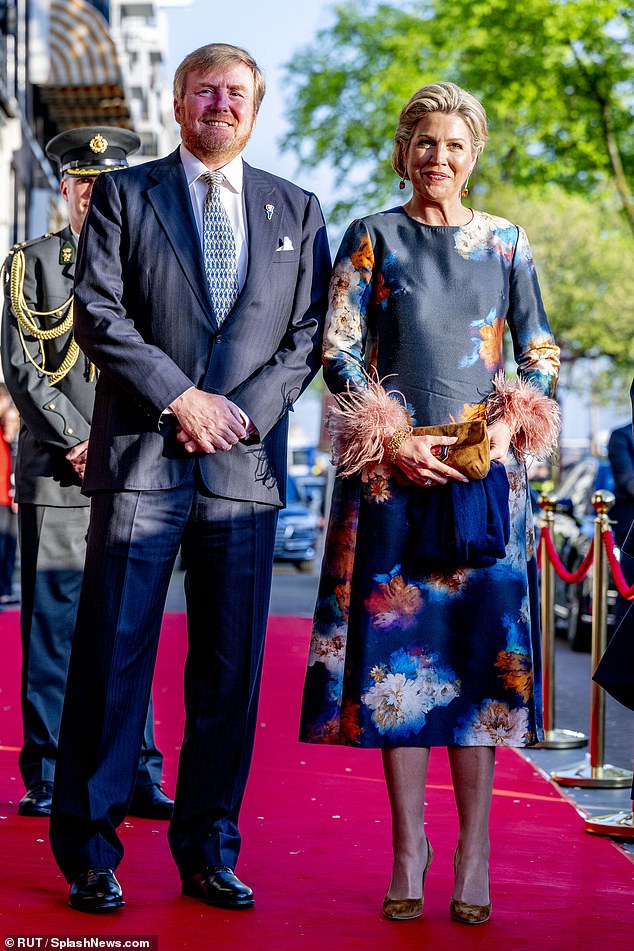 Maxima’s colourful number, which reached to her knees, had glamourous feathery sleeves in pink and a floral pattern in yellow, blue, red and orange. 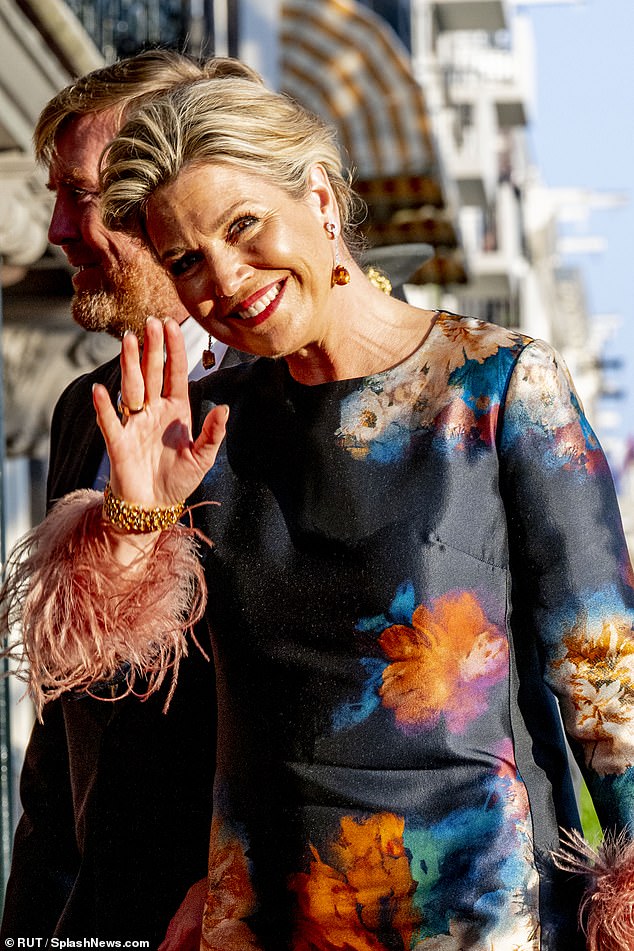 In her glamourous dress, Maxima beamed as she waved at the royal fans who had come to greet her tonight

Meanwhile, King Willem-Alexander looked dapper in a blue suit and a crisp white shirt, which he paired with a light green and white tie.

The couple looked glamourous as ever for the concert, which concludes this week’s commemorative engagements.

Yesterday, the couple looked more sober during an official ceremony on Da Sqaure that saw them mark the official end of the Nazi occupation, which takes place every year on May 4. 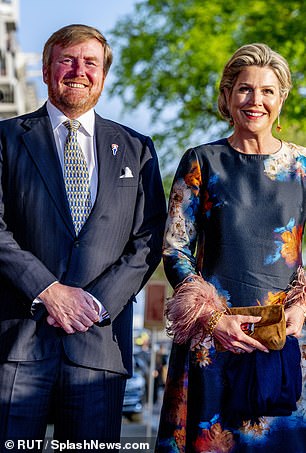 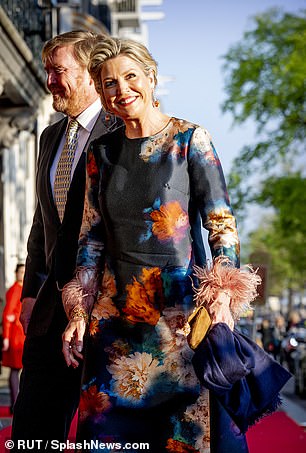 Willem-Alexander looked stylish in a navy suit with a white shirt, left, and Maxima stole the show in the floral number 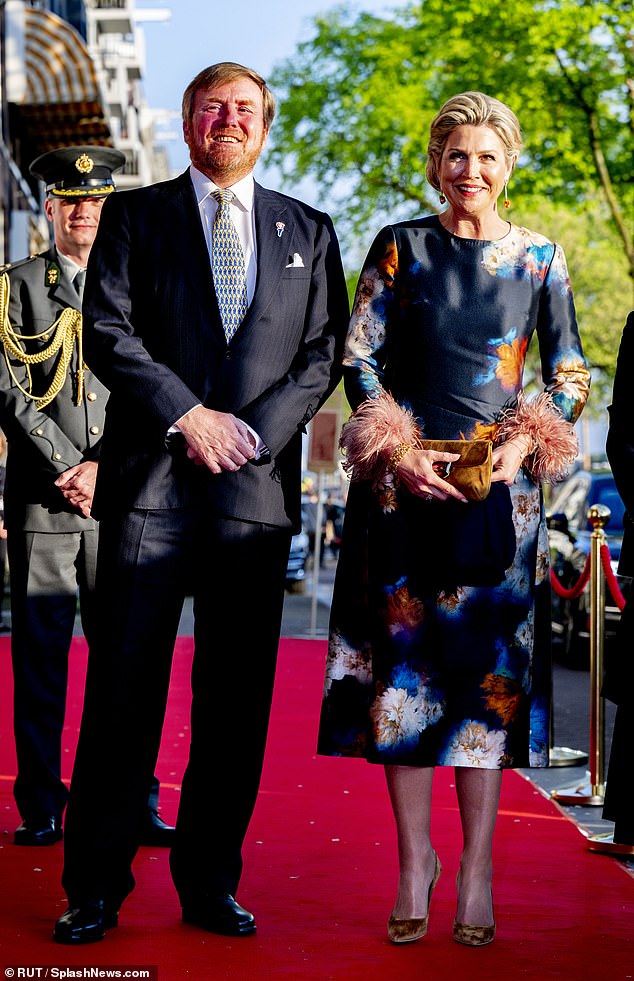 This week’s engagements were a departure from last’s week King’s Day festivities which officially marked Willem-Alexander’s birthday across the country.

The couple stepped out with their three daughters, Princess Amelia, 18, Princess Alexia, 16 and Princess Ariana, who just turned 15.

Maxima led the way in an elegant ankle-length cream cape she wore over an eye-catching pink dress, with nude stiletto.