Australia’s most bizarre surf break: Board riders hang ten on storm surge from Oma as run-off waters form rapids while they head back out to sea

Subtropical system Oma has moved offshore, but not before leaving behind a very unusual surf break on the Queensland coast.

Video footage taken at Tooway Lake near Moffat Beach on the Sunshine Coast shows a large volume of waves have rushed into the lake, creating rapids that are being ridden by surfers.

The high volume of the currents mean the riders risk being sucked into the ocean if they fall off.

Hanging ten: A surfer is seen riding rapid currents coming in at Tooway Creek at Moffat Beach on the Sunshine Coast 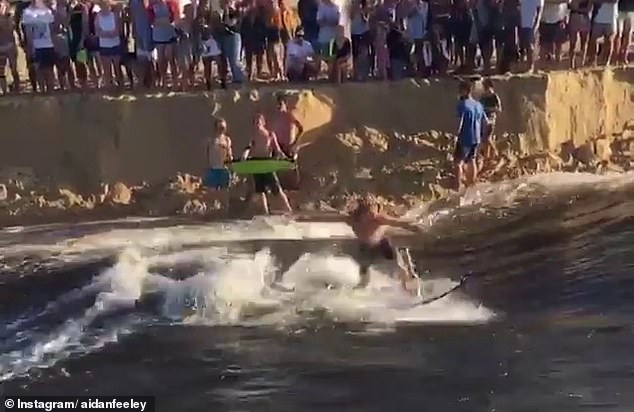 The phenomenon is caused by days of strong winds and high tides that have pushed waters to the mouth of the lake.

The Bureau of Meteorology announced on Saturday that Oma had downgraded to a subtropical system and would not make landfall.

It is expected to move towards the Coral Sea and Solomon Islands.

The Queensland coast has continued to experience high tides and strong winds and many Gold Coast beaches remained closed on Monday.

Although Oma no longer poses a threat inland, the erosion caused by the storm is reported to be the worst in 40 years.

Main Beach at Noosa and Marcoola Beach both experienced extreme erosion, with councils along the coast now inspecting the aftermath.

Large sections of dunes were swallowed up by the waves, leaving what some locals have described as ‘sand cliffs’ in their place.

Oma is sitting about 1,100km east northeast of Brisbane and moving northwards.

The system is expected to remain offshore but the Bureau of Meteorology will continue to monitor the situation in case it swings back towards land.