It has been dubbed the ‘short haul plane of the future’ and the ‘new darling of the aviation world’.

But mystery surrounds why Lion Air’s brand new Boeing-737 MAX 8, which went into service for the carrier just months ago, crashed this morning off Indonesia with 189 people on board.

The ill-fated aircraft, which plunged into the sea from 5,000ft minutes after take-off from Jakarta, was delivered to Lion Air in mid-August and put in use within days, according to aviation website Flightradar24.

The Lion Air aircraft crashed about 13 minutes after taking off for Indonesia. It is not clear how many people were on board (pictured is the plane) 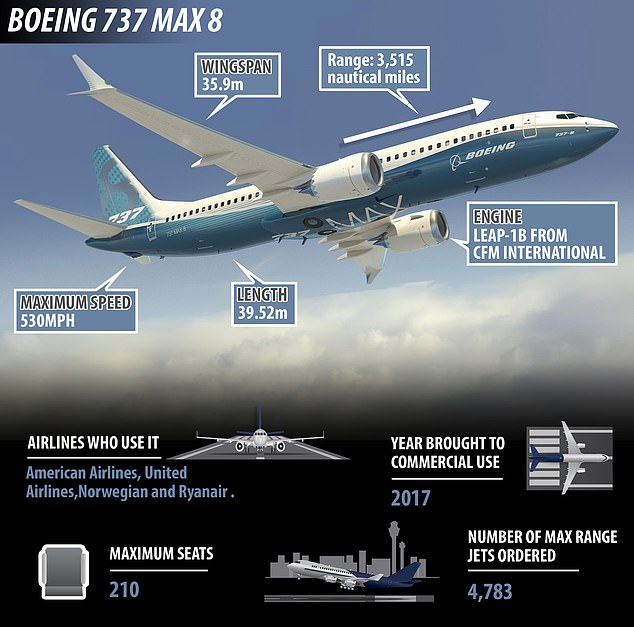 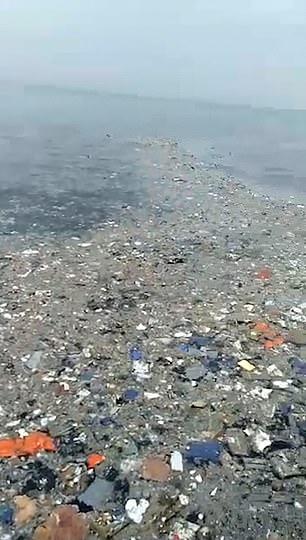 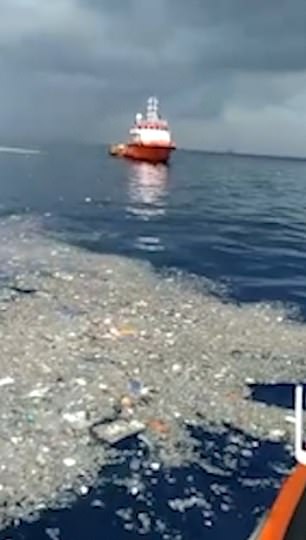 Debris could be seen on the water north of Indonesia’s capital, Jakarta, as rescue ships arrived at the scene in the wake of the disaster

It was leased from China Minsheng Investment Group Leasing Holdings Ltd., according to the official China News Service.

Malindo Air, a Malaysian subsidiary of Jakarta-based Lion Air, was the first airline to begin using the 737 MAX 8 last year.

The model replaced the similar 800 in the Chicago-based plane maker’s product line and has been ordered by carriers including American Airlines, United Airlines, Norwegian and FlyDubai.

Many consider the 737 MAX 8, with a range of 3,550 nautical miles and top speed of 530mph, the darling of the aviation industry thanks in part to its suitability for the increasingly popular short-haul market.

It adds fuel efficiency and a seat capacity of 210 to the workhorse reputation of the existing single-aisle 737.

According to CNN, one of the selling points of the MAX range is its LEAP jet engines which Boeing says ‘redefine the future of efficient and environmentally friendly air travel.’

This, the firm says, means the 737 MAX is between 10 per cent to 12 per cent more efficient than their predecessors

The doomed Lion Air jet was brand new and had logged only 800 hours of flight time, according to the head of the National Transportation Safety Commission, Soerjanto Tjahjano. 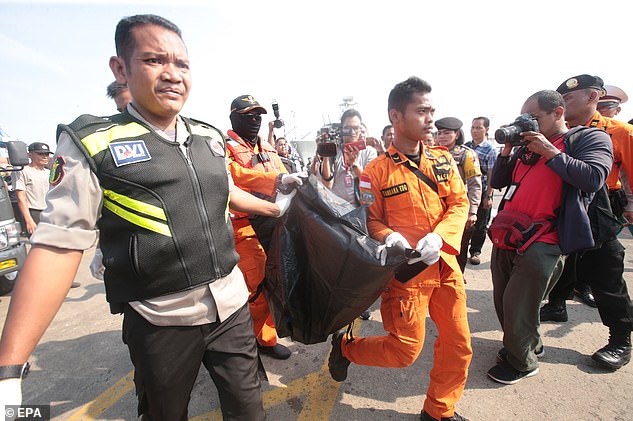 Members of an Indonesian rescue team carry a body bag at Tanjung Priok Harbour, Indonesia, in the wake of the disaster

This morning, the firm’s chief executive said the flight had undergone repairs for an unspecified ‘technical problem’ in a previous flight. But this, he said, had been ‘resolved according to procedure’.

Edward Sirait said his company was operating 11 of the same model and that there were no plans to ground the rest of them.

So far, there have been few details about the circumstances surrounding the crash. The cause will only be confirmed after an investigation is carried out.

Today’s tragedy is the first major incident involving that kind of plane.

He added: ‘If it’s very new there are sometimes snags that only reveal themselves after they are [used routinely]. These usually get sorted [within] the first three months.’ 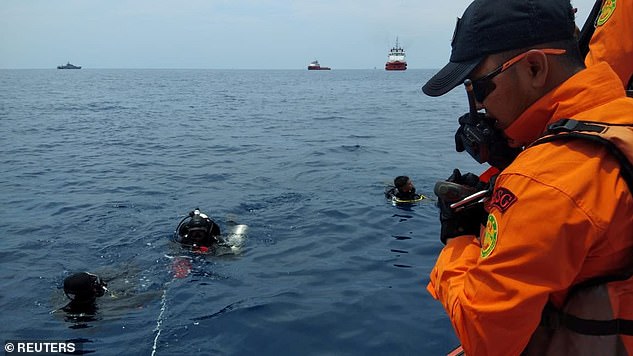 Rescue workers are at the site where it is believed the Lion Air flight JT610 crashed just minutes after taking off. Divers (pictured) are trying to locate the wreckage

Another, Jon Ostrower, editor of aviation publication The Air Current, told the BBC there were ‘always new teething issues… that’s common, but a far cry from something that would threaten the safety of an airplane’.

Boeing says the 737 MAX series is the fastest-selling airplane in its history, with almost 4,700 orders.

The firm, just days out from its first commercial delivery of the 737 MAX in May last year, reportedly suspended its release due to an engine issue, according to airline safety and product review site airlineratings.com.

It said the engines were a product of a joint venture between US-based General Electric and France’s Safran Aircraft Engines.

Today, US-based Boeing Co. said it was ‘deeply saddened’ by the Lion Air crash and was prepared to provide technical assistance to Indonesia’s crash probe.