Australia’s east coast is set for another drenching today with up to 100mm of rain bringing flash floods and power outages.

Rain will also hit Sydney where forecasters predict 6-25mm on Wednesday and 15-35mm on Thursday.

In Queensland, tropical cyclone Uesi is threatening to cause four-metre swells and coastal erosion after forming in the Coral Sea northwest of Vanuatu.

The cyclone, 1,400km off Australia, is tracking south to south-southwest and is expected to affect conditions from Fraser Island to northern NSW.

It is forecast to weaken as it approaches the coastline and is not expected to make landfall.

Australia’s east coast is set for another drenching today with up to 100mm of rain bringing flash floods and power outages. Pictured: Map showing rain forecast on Wednesday

In the northern rivers, Byron Bay and Tweed Heads could each receive 15-50mm on Wednesday. On the mid-north coast, Coffs Harbour could get 15-40mm.

The BOM is saying 15-45mm is possible in Nowra on Wednesday, while on Thursday the South Coast town could get 40-80mm.

Also on the South Coast, Huskisson could get 20-60mm of rain on Wednesday and 40-80mm on Thursday, while Ulladulla could receive 45-90mm on Thursday.

The NSW coast was drenched over the weekend, with up to 550 millimetres of rain falling across parts of the northern rivers, mid-north coast, Central Coast, Sydney, Blue Mountains and the Illawarra.

Sydney recorded its heaviest rain in three decades and was battered by gale-force winds, with emergency services on Tuesday left to clear fallen trees, remove debris and extract cars from floodwaters.

The SES on Tuesday night said it had received some 12,951 requests for help since last Wednesday night, with 10,660 call-outs completed.

Tens of thousands of NSW households were still without power on Tuesday night, with Ausgrid asking customers to prepare for outages into the weekend.

Sydney’s dams are 70 per cent full after the heaviest rain in three decades – but water restrictions will stay in place.

The Warragamba Dam in Sydney’s west, which accounts for 80 per cent of the city’s water storage, is 69 per cent full, up from just 42 per cent on Friday.

The dam has increased by 553 billion litres in five days – enough to supply the whole city for a year.

Residents in New South Wales have been warned to prepare for flooding and property damage, the State Emergency Service said.

Those with properties at risk of inundation should raise moveable items such as furniture as high as possible onto benches or tables, placing electrical items on top.

Farmers on low-lying land close to rivers and creeks were urged to monitor livestock, pumps and other equipment.

There are fears another storm this weekend could bring more coastal erosion to the northern beaches area of NSW.

In Queensland, flood warnings remain current for coastal catchments stretching from Bundaberg to the NSW border, with the southern inland also bracing for heavy falls.

‘There has been significant rainfall and as the catchment is very wet, its capacity to soak up more rainfall is reduced,’ Ms Wong said.

‘So when we have the significant rainfalls that we have seen in recent days, there can be rapid responses from the rivers with the catchments so wet.’

More rain is also forecast for the drenched towns of Dalby, Oakey, Applethorpe, Warwick and Roma, which have already surpassed their average February rainfall total. 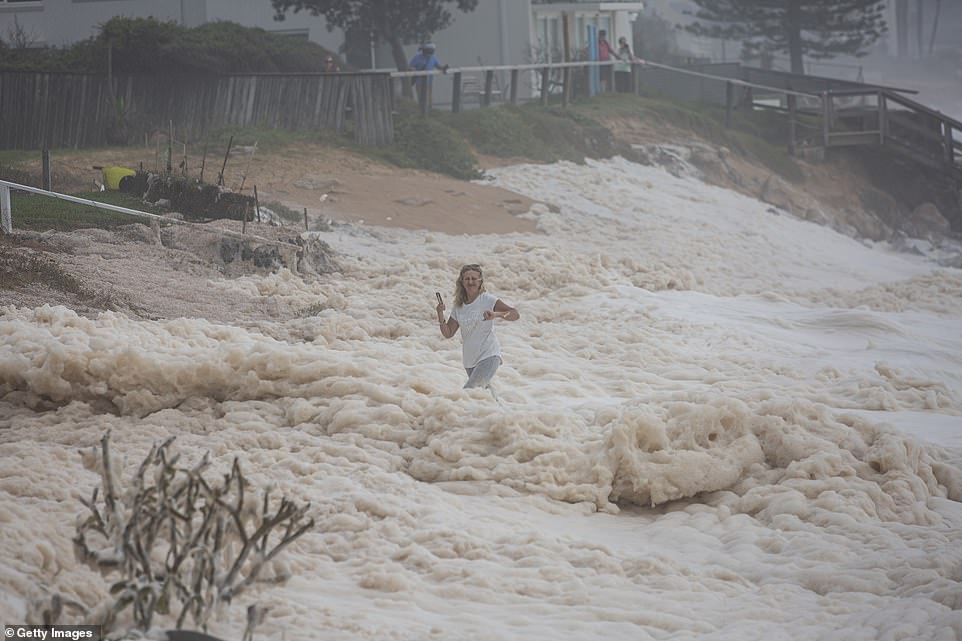 Destruction: A resident at Collaroy on the Northern Beaches as a high tide and large waves impact the coast on February 10 in Sydney, Australia 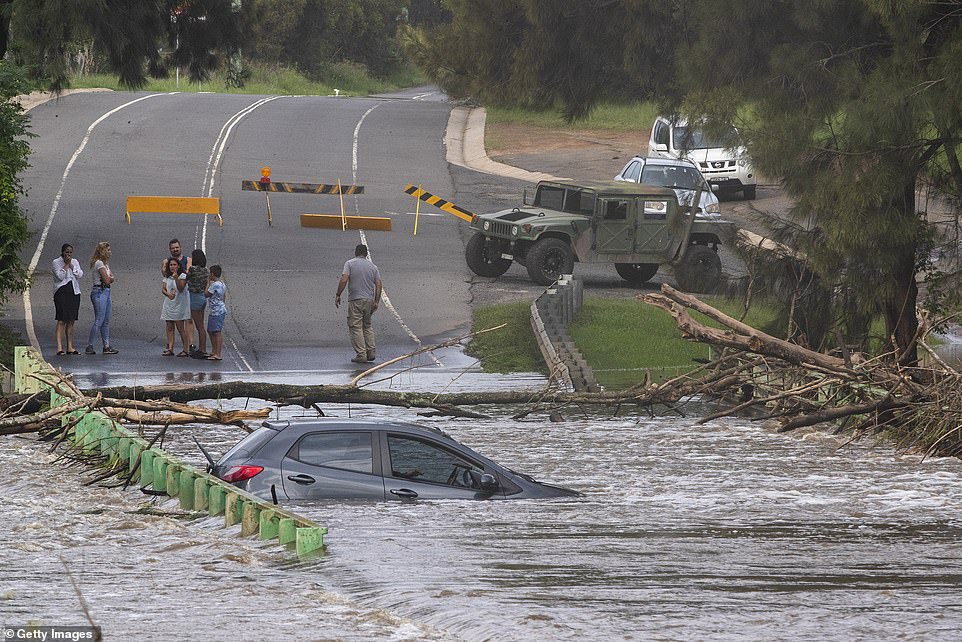 Devastation: A submerged car is seen on a bridge over the Nepean River at Cobbitty on February 10, 2020 in Sydney

Oakey and Warwick exceeded their monthly average in a day.

‘We are expecting further showers and thunderstorms to pop up in the next couple of days, with the potential for heavy rainfall continuing through southeast Queensland,’ Ms Wong said.

‘Widespread rainfall totals (of) 50 to 100mm are not out of the question and certainly some higher rainfall total will be dotted in the mix as well as severe storm pop-up.’

Shark nets and baited hooks have been pulled from all Gold Coast and Sunshine Coast beaches, Rainbow Beach, Bribie Island and North Stradbroke Island ahead of the wild weather.

The falls have been welcomed across the water grid, with storage capacity at almost 60 per cent, rising from 56.4 per cent on February 7.

A desperate search is under way for a motorist who was pictured driving through a fast-flowing weir in torrential rain.

A Toyota Land cruiser was captured on a security camera heading across the flooded road at Audley Weir in Sydney’s Royal National Park at 5.38pm on Sunday.

The raging water was so high that it reached the car’s side windows. 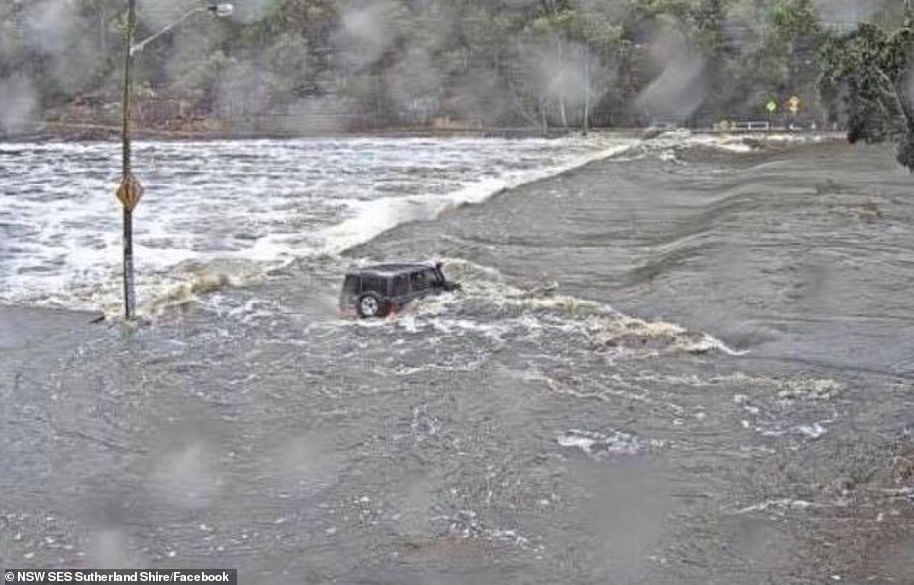 A Toyota Land cruiser was captured on a security camera heading across the flooded road at Audley Weir in Sydney’s Royal National Park at 5.38pm on Sunday

It is not known if the car or driver made it safely to the other side.

The NSW State Emergency Service uploaded the photo to Facebook on Tuesday in a desperate bid to track down the driver.

Officials said they wanted to know if the driver was safe.

The post read: ‘Okay, so we need your help please! On Sunday afternoon a 4WD was spotted entering a flooded Audley Weir.

‘We have exhausted every avenue to make sure the person in this photo is ok!

‘We have no intention of trying to get whoever this is in trouble, we just want to know that they are ok and got out alive!

‘If this is you, or you know who this is please get in touch to let us know.

‘The water was 2m deep per the flood gauge when this, and other images where taken.

‘For everyone else, PLEASE DON’T DRIVE THROUGH FLOODWATER’.