The multi-millionaire founder of the Rainforest Cafe chain has lost his lawsuit against the city of Minnetonka Beach to take down a public dock that extends into the lake in front of his shore-front property.

Steven Schussler and his wife Sunhi Ryan-Schussler sued the city and the Lake Minnetonka Conservation District claiming that the dock was a health hazard for swimmers off their 110 feet of shoreline.

They added that it prevented them from building a dock off the $3.4million home for their own three boats.

The district court ruled Wednesday, however, that the city had the right to use the land over Schussler.

The themed restaurant chain founder, 64, has said that he may appeal the ruling and take the case further.

Steven Schussler, the founder of the Rainforest Cafe, sued the city of Minnetonka Beach and the Lake Minnetonka Conservation District over a public dock that he says prevents him from building a dock for his own three boats in front of his lakefront property 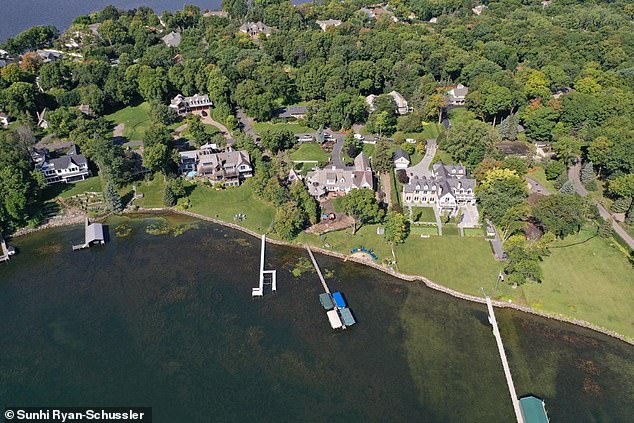 The problem dock is seen here in the center leaning to the right in front of the couple’s home. The Schusslers say it is blocking them from building a dock for their three boats

‘We always knew from Day One that we might have to go to the Supreme Court,’ Schussler told the Minnesota Star Tribune.

‘But in the meantime we’re moving on, and we just want everybody to have a fantastic summer.’

The Schusslers filed the lawsuit saying that the four boats rented out by the city at the end of the public dock were dangerous for swimmers from their property as they moved in and out.

The dock extends from the shoreline at a 45-degree angle and obstructs their use of the lake, they added.

‘God forbid a child or nieces and nephews or their children should ever come over and visit us and get hurt in the water,’ Schussler said.

Hennepin District Judge Thomas Fraser ruled against the couple Wednesday, adding that they knew about the 160-foot public dock,  and that it would be difficult for them to dock their own boats there, before they bought the property.

‘Plaintiffs knowingly bought a lot with certain limitations, especially given the number and size of the boats that plaintiffs wish to dock in front of their property,’ the judge wrote.

Fraser also ruled that the proximity of the dock to swimmers is not unusual in answer to the argument that it is a safety hazard.

Schussler has admitted he did know about the dock when he and his wife moved in 2017 after buying the home for $3.4million. They had hoped, however, to ‘fix’ the problem by working on a solution with the city and his neighbors.

‘I was buying a problem I thought I could fix,’ Schussler said.

‘What we’ve learned since moving in here is that it’s a very unfair situation for the homeowner.’ 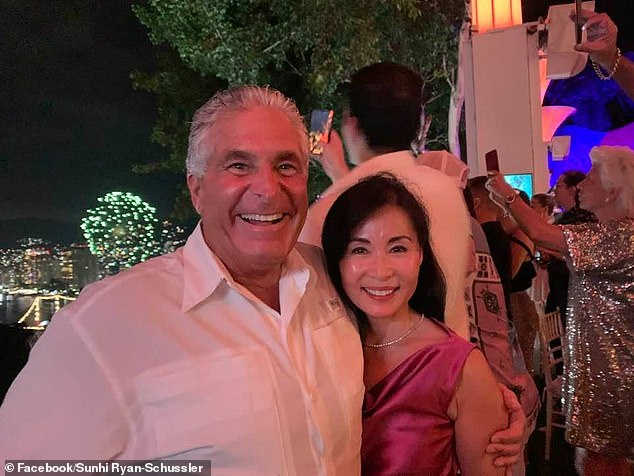 He only filed the suit in February 2020, according to SW News Media, when the couple was unable to negotiate with the city and neighbors to shift the dock’s position

The couple have lived in the home for two and a half years and said that they had wanted to be good neighbors and even hosted a city party at their home.

The Schusslers were seeking a total of $250,000 jointly from the city of Minnetonka Beach and the LMCD for various losses and infringements caused by the dock.

The dock by the Schussler’s property, Dock 10, is about 160ft and includes four boat slips. It is extended from a late 19th century ‘fire lane,’ which allowed fire trucks access to lake water for fighting blazes.

Other municipal docks around the lake don’t generally extend at a 45-degree angle but this dock is forced to because of the shape of the Schussler’s property. 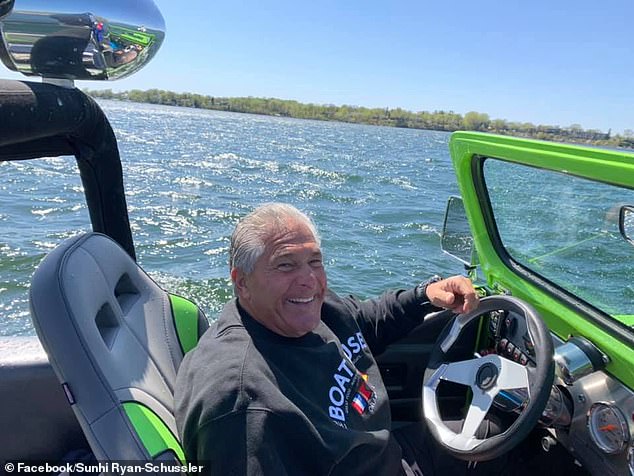 ‘That truly is the problem there, and they bought it knowing that.

‘Minnetonka Beach has the legal authority to regulate the use of the fire lane for purposes of public enjoyment and access to Lake Minnetonka. This authority includes the right to grant permits for the installation of seasonal docks by private parties.’

Schussler is a self-made entrepreneur. As well as being the founder of Rainforest Cafe, he created, built and owns T-Rex Cafe, Yak & Yeti Restaurant, Betty & Joe’s, Hot Dog Hall of Fame, Galaxy Drive In, and Backfire Barbeque.

A native New Yorker, he opened his first Rainforest Cafe in Bloomington, Minnesota, in October 1994 after working in the television and broadcast industry.

He serves as the CEO of his own company Schussler Creative which he started in 2000. His wife also works with the company.