A spiritual guru convicted or raping two followers and suspected of assaulting dozens more was described as a ‘wild beast’ who did not deserve mercy.

Supporters of Gurmeet Ram Rahim Singh, 50, last week went on a rampage in which at least 38 were killed and around 200 injured.

The library at the prison where Singh is being held was converted into a court in a bid to prevent further violence, but the judge did not hold back in his criticism of the rapist.

Judge Jagdeep Singh said, the BBC reports: ‘The victims put the convict on the pedestal of “god” and revered him.

Indian spiritual guru, who calls himself Saint Dr Gurmeet Ram Rahim Singh Ji Insan, arrives for a press conference ahead of the release of his new film MSG, The Warrior Lion Heart, in New Delhi, India

‘However, the convict committed breach of the gravest nature by sexually assaulting such gullible and blind followers.’

And the judge concluded that the guru ‘did not even spare his own pious disciples and acted like a wild beast’, ruling that he did not deserve any mercy.

Singh was convicted on Friday of raping the two women at the sprawling headquarters of his hugely popular Dera Sacha Sauda sect in the northern state of Haryana, in a case dating back more than 15 years.

Outside the prison where the case was heard, police officers were ordered to shoot protesters on sight.

The prosecution team are working on two appeals as they believe he is hiding at least 48 other victims who may have been killed to stop them testifying. 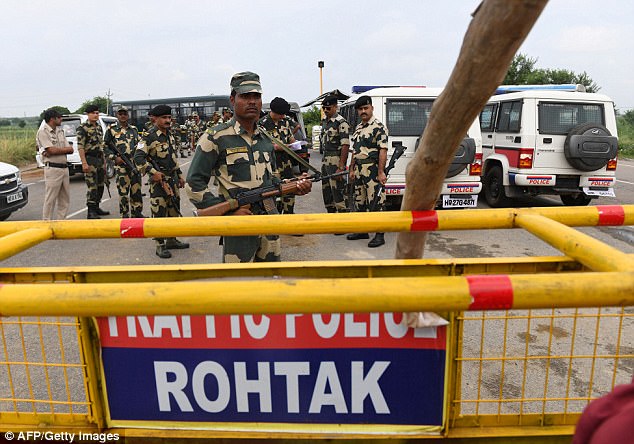 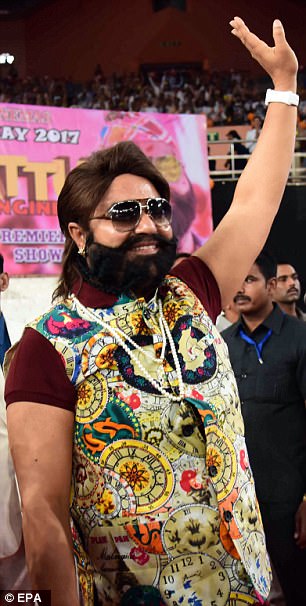 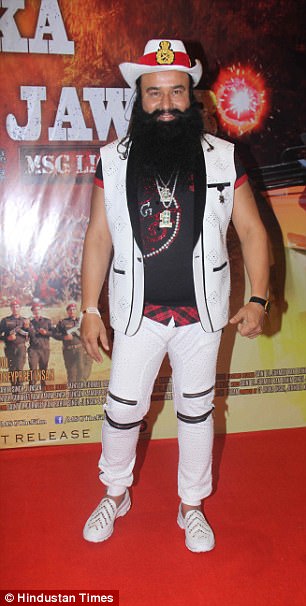 Rapist: Gurmeet Ram Rahim Singh, 50, known as ‘the guru in bling’, has been found guilty of raping two female devotees 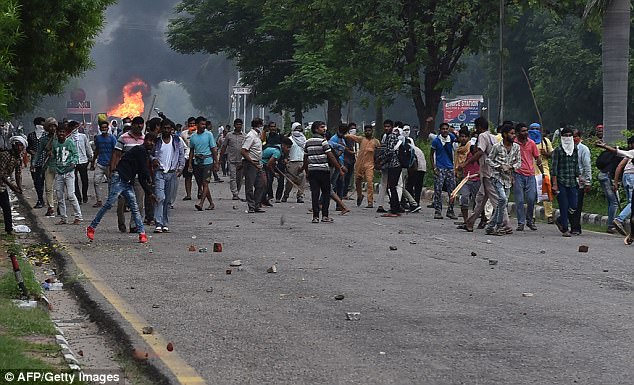 Followers of Indian religious leader Gurmeet Ram Rahim Singh throw stones at security forces during clashes after the controversial guru was convicted of rape in Panchkula on August 25, 2017 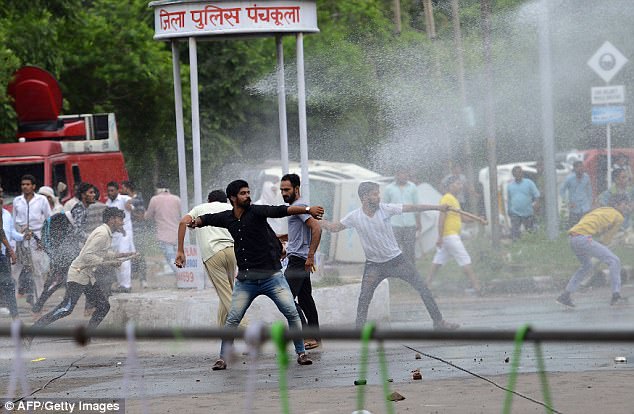 Prosecuting lawyer Utsav Singh Bains said after the sentence was pronounced at a makeshift court at Rohtak in Haryana: ‘Ram Rahim has been sentenced to 10 years in jail.’

But it later transpired the sentence was 20 years.

Bains, lawyer for the victims, said he would seek a longer sentence and asked India’s federal investigations bureau to investigate dozens more alleged cases of abuse.

‘We will file two appeals shortly. One for enhancement of the punishment and another for further investigation into the case,’ Bains said.

‘We believe there are at least 48 more victims who were sexually abused and who may have been killed or are too scared to come out and testify against Ram Rahim.’

Authorities have clamped intense security on the city of Rohtak where Singh is being held due to fears of a repeat of Friday’s violence, when tens of thousands of his supporters set fire to cars and clashed with security forces.

Prime Minister Narendra Modi condemned the violence but his ruling Bharatiya Janata Party, which is also in power in Haryana, was criticised for failing to anticipate the riots.

Police were taking no chances in Rohtak, where mobile internet has been cut, roads barricaded with barbed wire and soldiers deployed to man checkpoints.

But while the national army were kitted out in full riot gear, it appeared the local police officers were armed with nothing but cricket helmets to defend themselves. 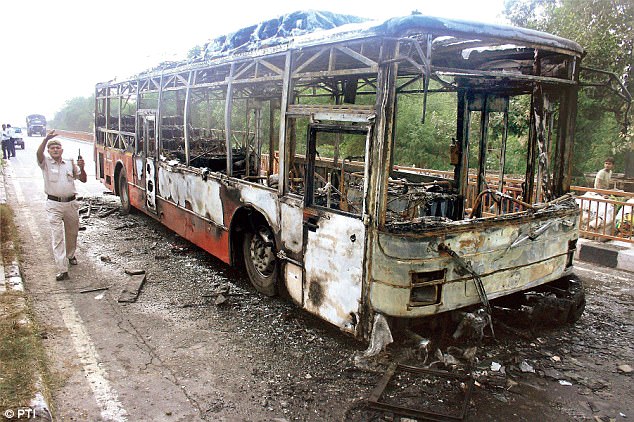 A Delhi Transport Corporation bus set on fire by followers of Gurmeet Ram Rahim after his conviction in a rape case, in New Delhi on Friday 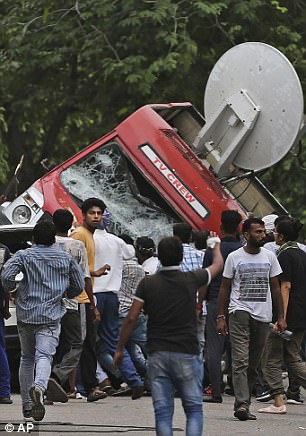 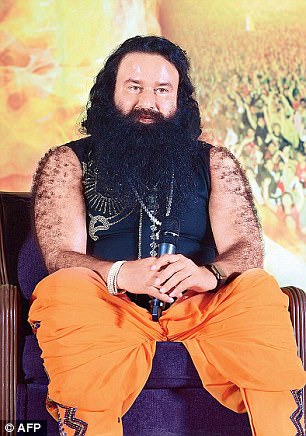 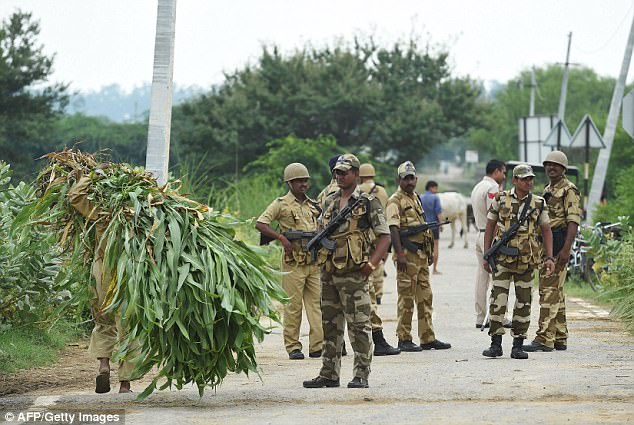 Indian security personnel stand guard along a road near Sonariya jail in Rohtak on August 28, 2017 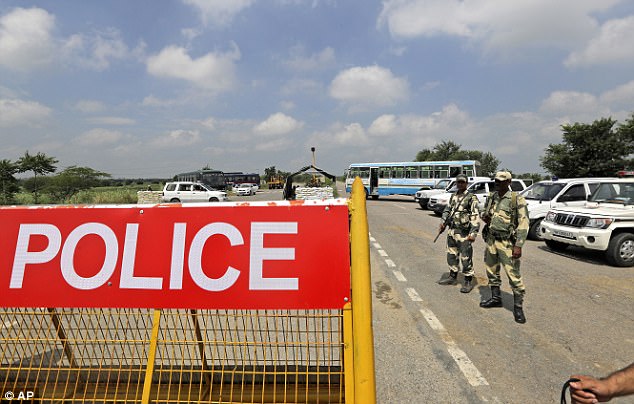 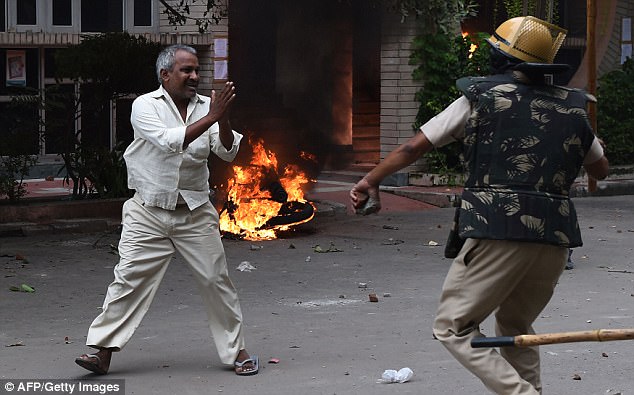 Conviction: A follower of Singh pleads for his safety after being hit with a stick during clashes between the controversial guru’s followers and security forces 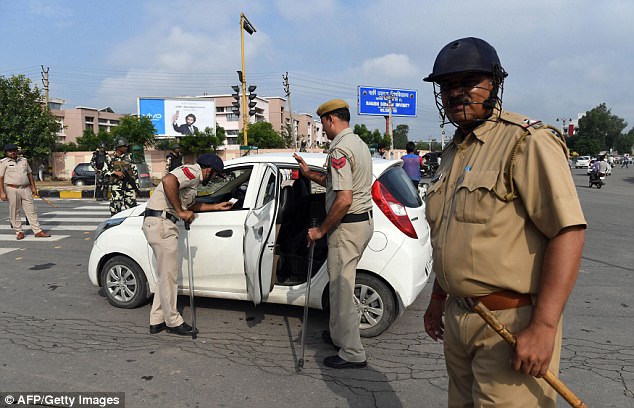 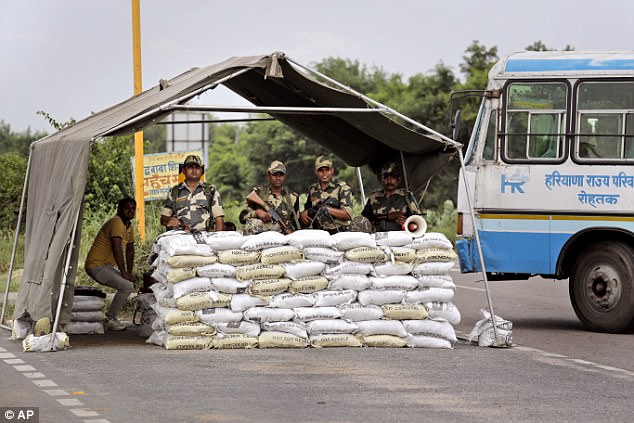 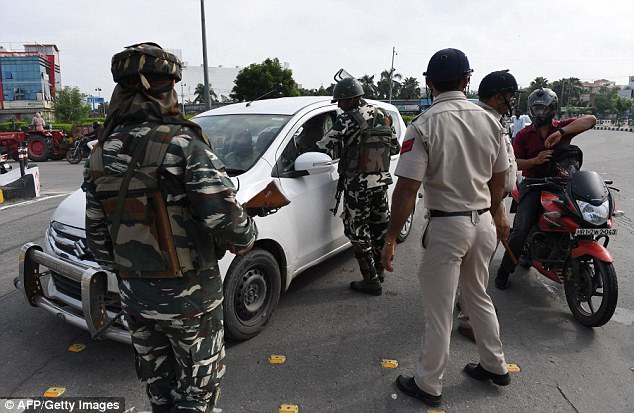 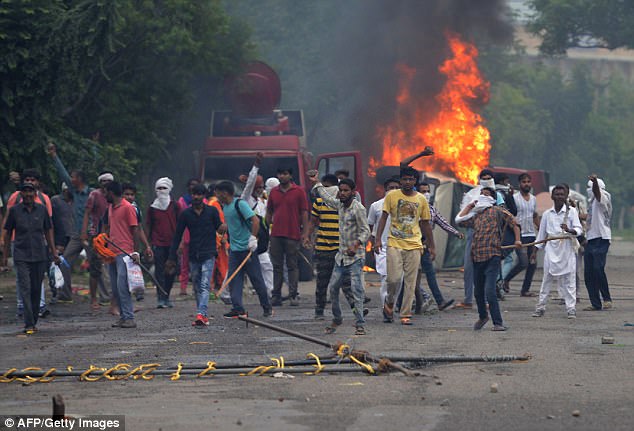 More than 100 of Singh’s senior loyalists have been placed in detention as a precautionary measure, said Rohtak police chief Navdeep Singh Virk.

He said his officers would use ‘whatever force is required’ against the guru’s devotees should they again resort to violence.

‘If the situation so arises that (we) need to use firearms, my officers have complete authority,’ the police chief told broadcaster NDTV.

A judge was flown in by helicopter to sentence the spiritual leader known as the ‘guru in bling’ for his penchant for bejewelled costumes.

The rape case was brought after an anonymous letter was sent to then-prime minister Atal Bihari Vajpayee in 2002, accusing Singh of repeatedly raping the sender and several other women in the sect.

India’s self-styled ‘godmen’ have legions of devoted followers but many are dogged by scandal and several have been charged or convicted of crimes.

Gurus – often Hindu ascetics – have long played an integral role in the daily lives of many Indians, who believe their teachings provide a pathway to enlightenment.

But sceptics say some of the newer ‘godmen’ are nothing more than confidence tricksters who use their often poor followers to win power, fame and riches. Many lure supporters with free canteens, clinics and other services not provided by the state.

But experts point out that among their devotees are wealthy and educated Indians and say they also provide a sense of community and purpose in a rapidly changing country. 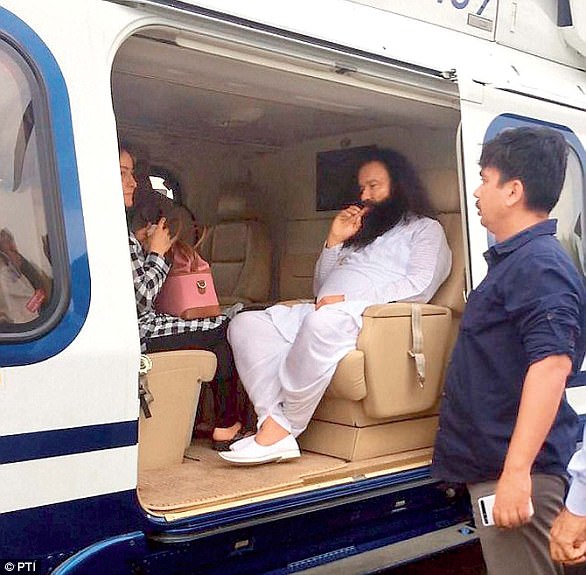 Here are some of the more famous godmen: 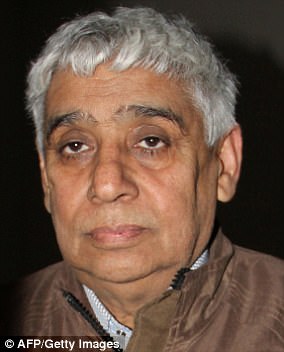 Rampal Maharaj, who was wanted for conspiracy to murder back in 2014

In 2014 Rampal Maharaj barricaded himself into his ashram, guarded by devotees armed with stones, petrol bombs and other weapons, after a court issued a warrant for his arrest on a series of charges including conspiracy to murder.

It was days before police were finally able to clear the giant complex and arrest the guru, who considered himself an incarnation of a 15th-century mystic Indian poet.

Six people died during the siege.

Followers said the guru regularly bathed in milk, which was then used to make kheer, a sweet rice pudding that they believed could cure illnesses. 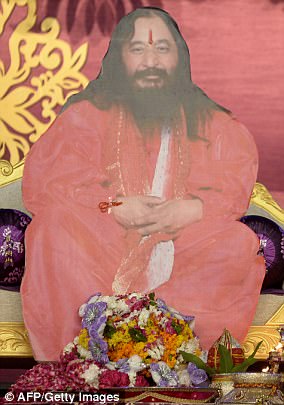 Devotees of Ashutosh Maharaj, who died in January 2014, are preserving his body in a freezer and insist he is in a deep meditative state.

But his followers say he is in a spiritual state called samadhi and have kept his body in a freezer at his heavily guarded 100-acre (40-hectare) ashram in the northern state of Punjab.

One man who claimed to be his former driver has alleged that followers were refusing to release the body because they wanted a share of the guru’s assets. 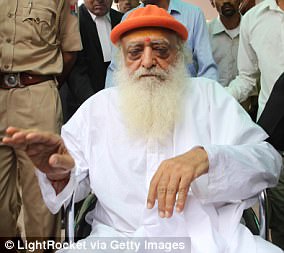 Asaram Bapu, a white-bearded guru who once condemned Valentine’s Day as encouraging young people to engage in ‘dirty acts’, is charged with several offences including rape, trafficking and sexual crimes against minors.

Police arrested him in 2013 after a 16-year-old girl accused him of raping her on the pretext of ridding her of ‘evil spirits’.

Hundreds of the 76-year-old’s supporters clashed with television news crews and police after his arrest.

Since then at least three key witnesses have been shot dead.

In his preachings, he had urged followers to live a ‘pious life’ free of sexual desires.

Indian guru Swami Nithyananda faces a series of assault and sexual abuse charges, although he has never been convicted.

Five women accused the 40-year-old of abusing them at his Hindu religious retreat in the southern state of Karnataka.

Nithyananda, who also operates a meditation centre in Los Angeles, has claimed to possess paranormal powers of levitation. 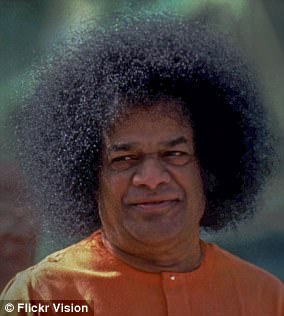 Sathya Sai Baba was one of India’s most famous and widely followed gurus, known for his vast charitable empire

Sathya Sai Baba was one of India’s most famous and widely followed spiritual gurus, known for his vast charitable empire.

When he died in 2011, he was given a state funeral attended by tens of thousands of followers, as well as then-prime minister Manmohan Singh and cricketing icon Sachin Tendulkar.

But his charitable trust was often criticised for lacking transparency.

At public meetings, his showman antics – in which he would miraculously produce gold coins or watches on stage – brought him both fame and notoriety, with critics accusing him of being a fraudster.

A judge asked the federal Central Bureau of Investigation to look into the accusations, but it took years to trace the alleged victims and it was not until 2007 that two women came forward and filed charges.

An estimated 200,000 members of Singh’s Dera Sacha Sauda movement had gathered in the city of Panchkula in a show of support a day before his guilty verdict.

Violent protests followed across his power base in Haryana which borders New Delhi, with police deploying tear gas and water cannon.

Over the weekend thousands of followers congregated in the spiritual headquarters of his sect at Sirsa, despite calls from police and troops for them to disperse.

Devotees eventually began trickling out one by one from the compound Sunday, under the supervision of hundreds of soldiers and riot police, after a curfew was briefly lifted.

Modi said Sunday it was ‘natural to be worried’ as the violence even briefly reached the capital New Delhi.

‘Violence is not acceptable in the nation, in any form,’ he said in his monthly radio address.

‘Those who take law in their hands or take to violence will not be spared, whoever they are.’

Followers of the self-styled ‘godman’ continue to insist upon his innocence.

Singh’s sect describes itself as a social welfare and spiritual organisation but he is no stranger to controversy.

In 2015 he was accused of encouraging 400 followers to undergo castration at his ashram so they could get closer to god.

Singh also stood trial for conspiracy over the murder in 2002 of a journalist investigating the rape allegations. He denied the charge and the case is ongoing. 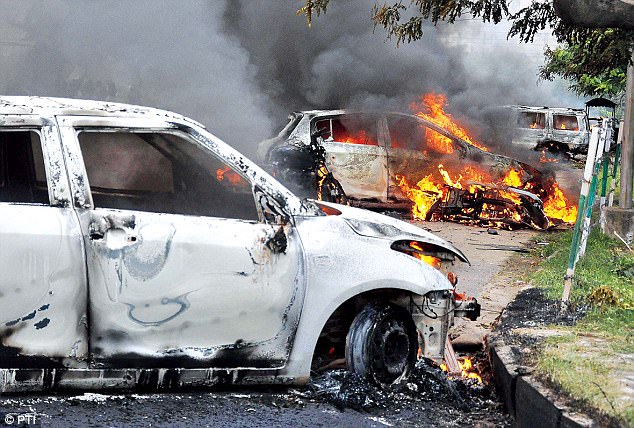 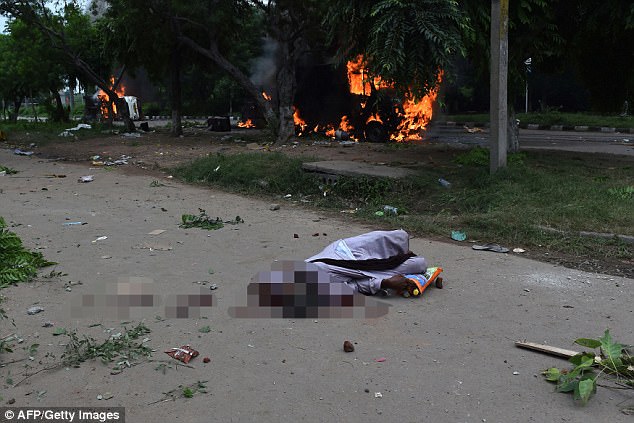 Authorities imposed curfews in several areas of Haryana and Punjab states, while the capital, Delhi is on alert.

The prison has been transformed into a fortress, with journalists banned from approaching closer than a mile and roads lined with barbed-wire barricades.

‘A library in the jail has been converted into a courtroom,’ said Rajiv Pant, an official in charge of prisons.

There was also heavy security outside the headquarters of Singh’s spiritual cult, Dera Sacha Sauda, a 1,000-acre (400 hectare) compound in Sirsa town in Haryana.

Thousands of his supporters are believed to be inside the compound although many left following a tense stand-off with soldiers. 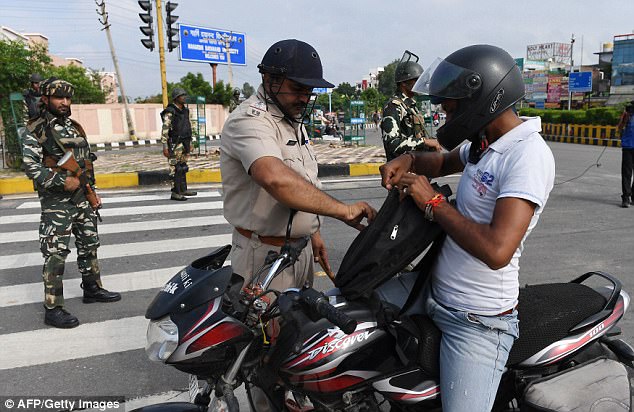 An Indian guru convicted of rape awaited sentencing on August 28, with authorities ramping up security amid fears of fresh violence days after protests over his guilty verdict left 36 dead 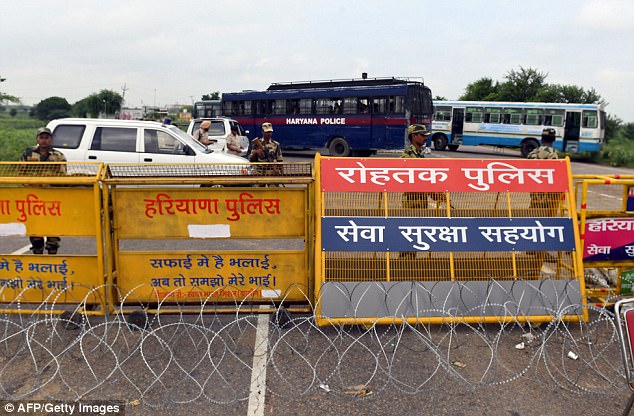 The Haryana state government, controlled by Prime Minister Narendra Modi’s ruling party, has faced criticism from the opposition and a state court for failing to stop the violence that erupted on Friday.

In a monthly radio address on Sunday, Modi said it was ‘natural to be worried’ after the violence, that briefly broke out in Delhi.

The rape case against Singh was brought after an anonymous letter was sent to then Prime Minister Atal Bihari Vajpayee in 2002.

The author accused Singh of repeatedly raping her.

The case has highlighted the Indian heartland’s fascination with spiritual gurus, who enjoy immense influence for their ability to mobilise millions of followers, many of whom are frustrated by the shortcomings of the state.

The 50-year-old Singh is known as the ‘guru in bling’ for his bejewelled costumes.

In 2015, Singh started a film franchise portraying him as MSG or ‘Messenger of God’, performing miracles, preaching to thousands and beating up gangsters while singing and dancing.