Introducing Mr. and Mrs. Luis ‘Louie’ Ruelas, loved up and happy to share it with the world.

Seen for the first time since their extravagant wedding Saturday evening, these exclusive pictures obtained by DailyMail.com show Teresa, 50, and her new husband, 46, together and smiling the morning after the big night before.

The couple playfully posed, their hands miming hearts, and blew kisses as they joined their bridal party for a post wedding champagne brunch.

The brunch on the patio of Orchard Park by David Burke, East Brunswick’s Grande Chateau’s chic restaurant, rounds off a weekend of celebrations that began with their rehearsal dinner Friday night.

Dressed in a hot pink midriff skimming top and skirt Teresa looked relaxed as she and Ruelas joined guests including Ruelas’s sister, Veronica who was maid of honor and bridesmaids Jennifer Aydin and Dolores Catania.

The couple playfully posed, their hands miming hearts, and blew kisses as they joined their bridal party for a post wedding champagne brunch at Orchard Park 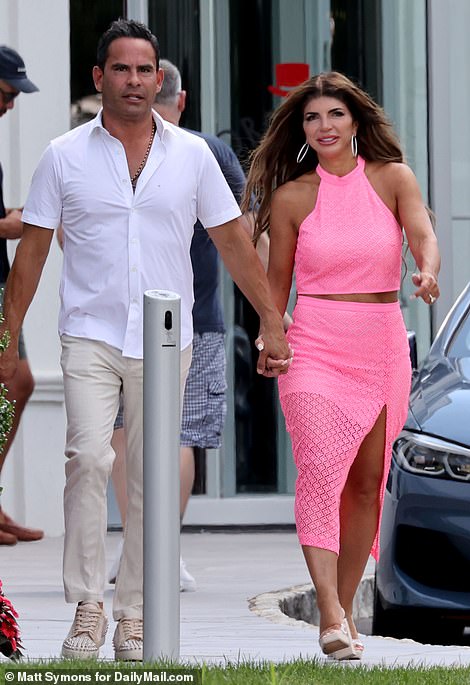 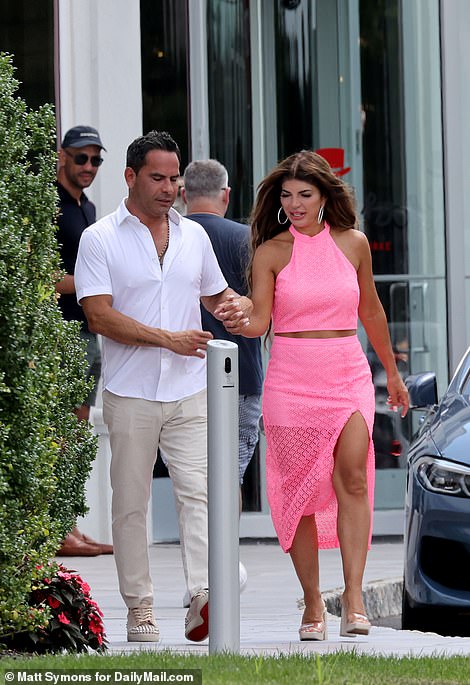 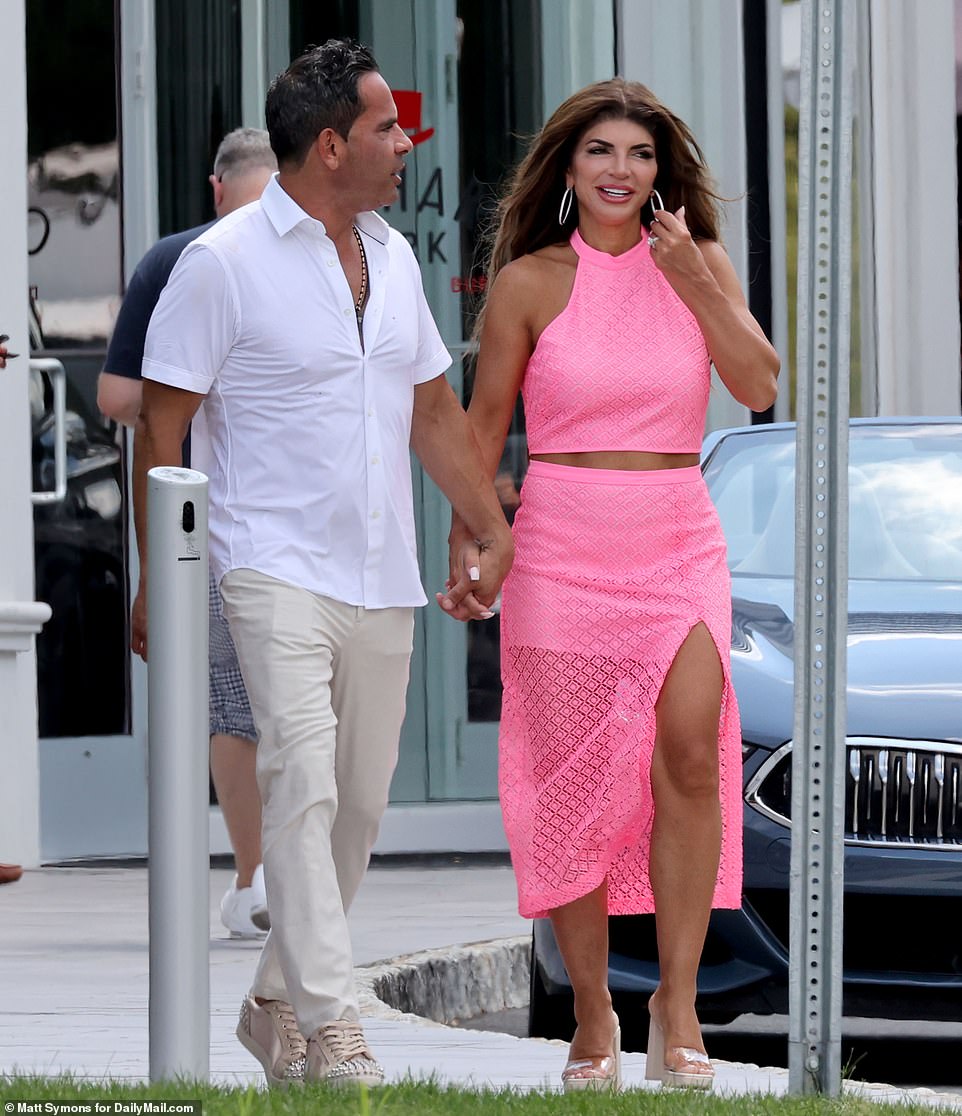 They included Cynthia Bailey, Phaedra Parks, Chanel Ayan, Kenya Moore, Dorinda Medley, Margaret Josephs, Alexia Nepola, Jill Zarin and more in a congregation that was a Who’s Who of the Bravo shows’ stars past and present.

Guests were treated to a dinner of cowboy steaks and late-night snacks from a Shake Shack, pizza and candy truck.

Earlier they had watched the couple seal their union with a kiss after exchanging vows written by themselves on a raised rotunda in Park Chateau Estate’s Versailles inspired gardens. 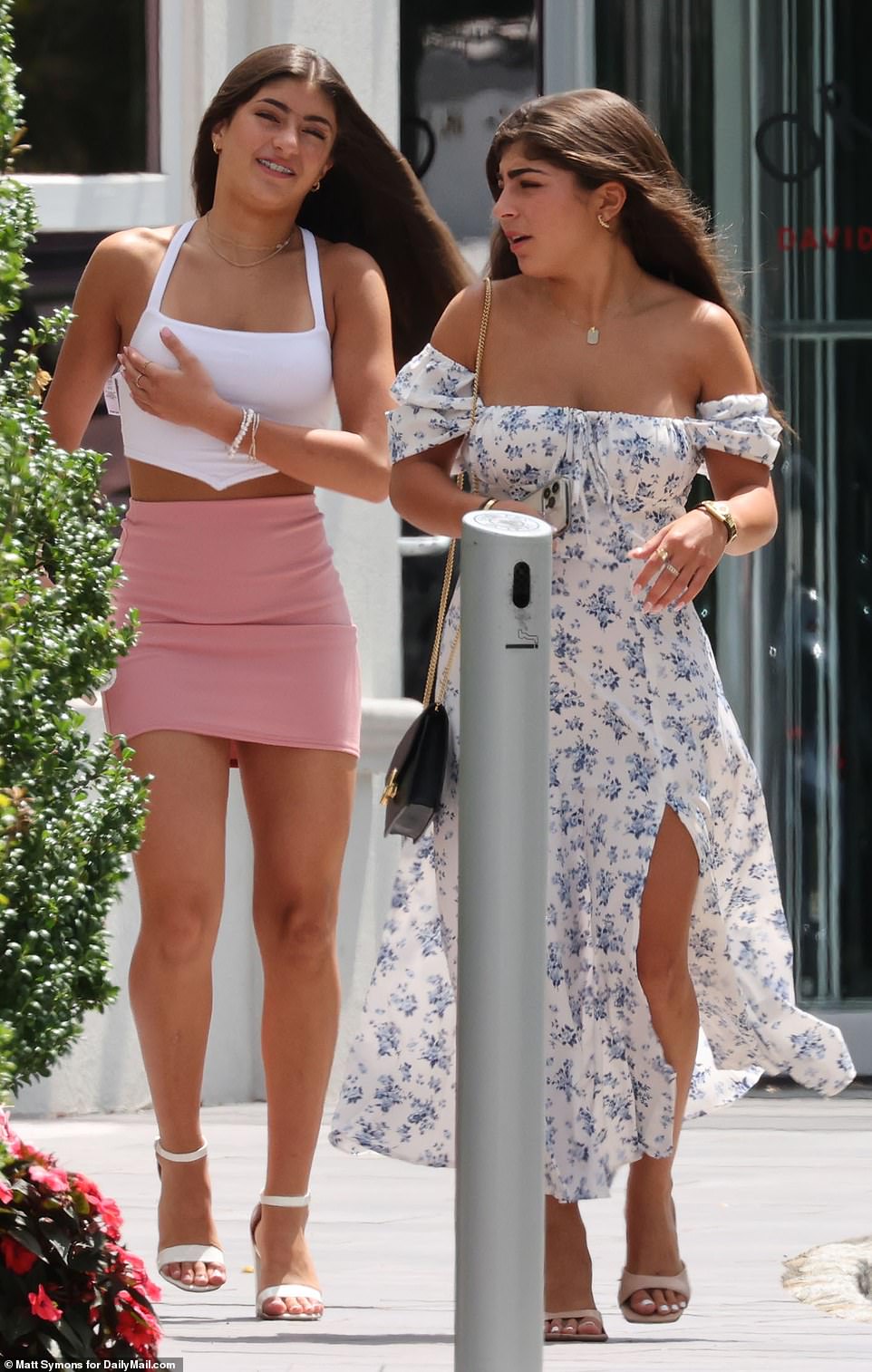 Veronica Ruelas donned strappy high heels and a flowy, gray striped dress for the brunch after serving as the maid of honor and officiated the wedding ceremony 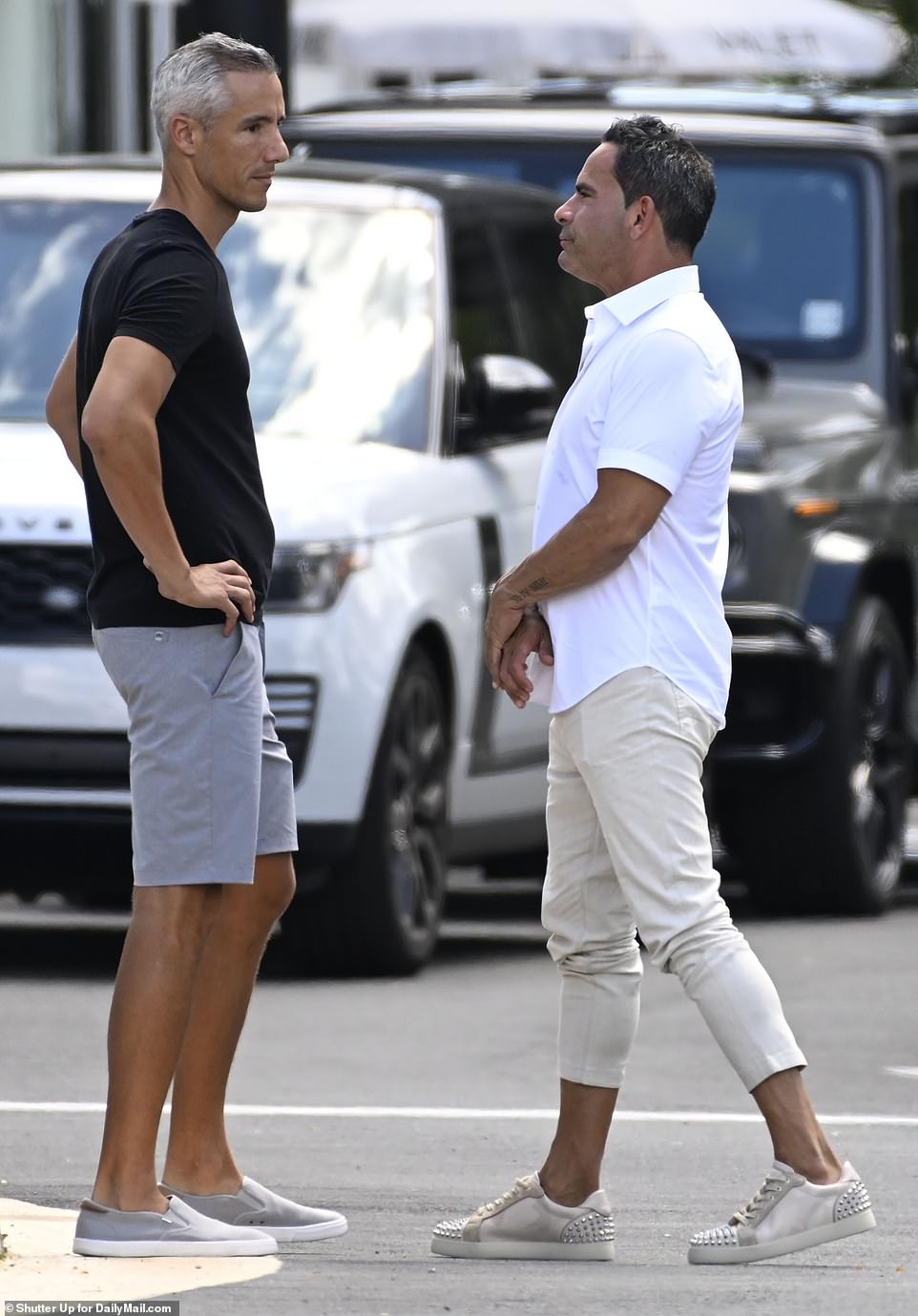 Luis Ruelas is pictured here after his big day wearing white capris, bedazzled white sneakers and a white polo as he spoke to a friend ahead of the brunch

Giudice, 50, and Ruelas tied the knot Saturday at the Park Chateau Estate & Gardens in East Brunswick, New Jersey in front of 220 guests.

DailyMail.com was there to witness the Real Housewife of New Jersey and queen of reality TV – appropriately wearing a crown and dripping with jewelry – as she nervously held a piece of card from which she read the vows she had written herself.

The New Jersey housewife walked down the aisle to Ave Maria in honor of her late parents.

Ruelas’ two sons, David and Nicholas, also stood by their father’s side during the ceremony officiated by Ruelas’ sister, Dr. Veronica Ruelas.

At one point Ruelas, too, seemed overwhelmed with emotion, wiping tears from his eyes as he looked at his bride. He stood, dapper in his white tuxedo, as the pair married on a raised rotunda before a white floral display of two intertwined hearts.

They lit a candle together before sharing a kiss as they were declared husband and wife. Sparklers were lit as Rhianna’s ‘Shine Bright Like a Diamond,’ played out.

As the party got underway girls dressed in white flapper dresses and feather headbands arrived along with partners dressed in top hat and tails – a dance troupe there to perform for the couple’s guests.

The wedding has been months in the planning with the Giudice and Ruelas telling friends they wanted a ‘somewhat’ traditional feel. 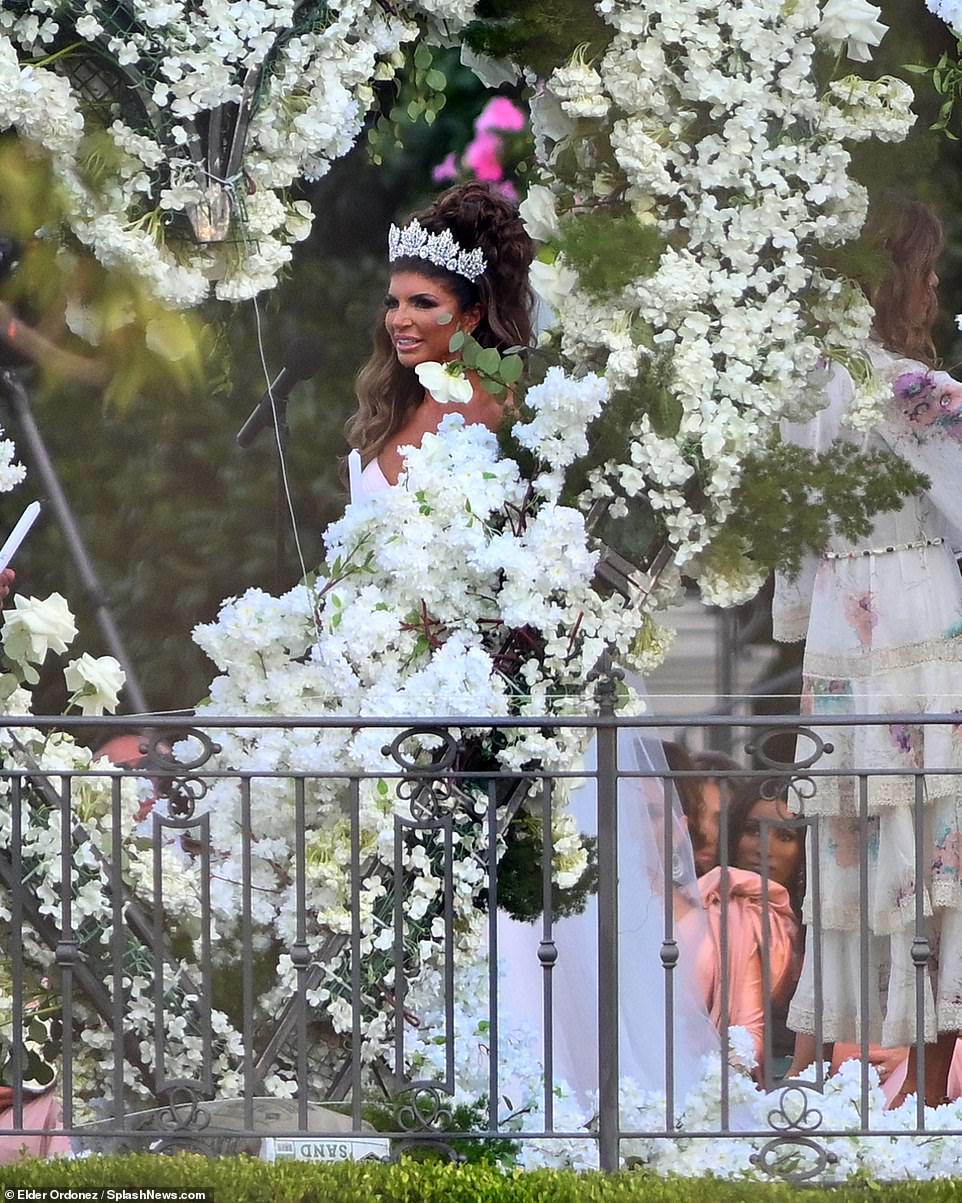 A glowing bride! Teresa Giudice is pictured during her wedding ceremony on Saturday 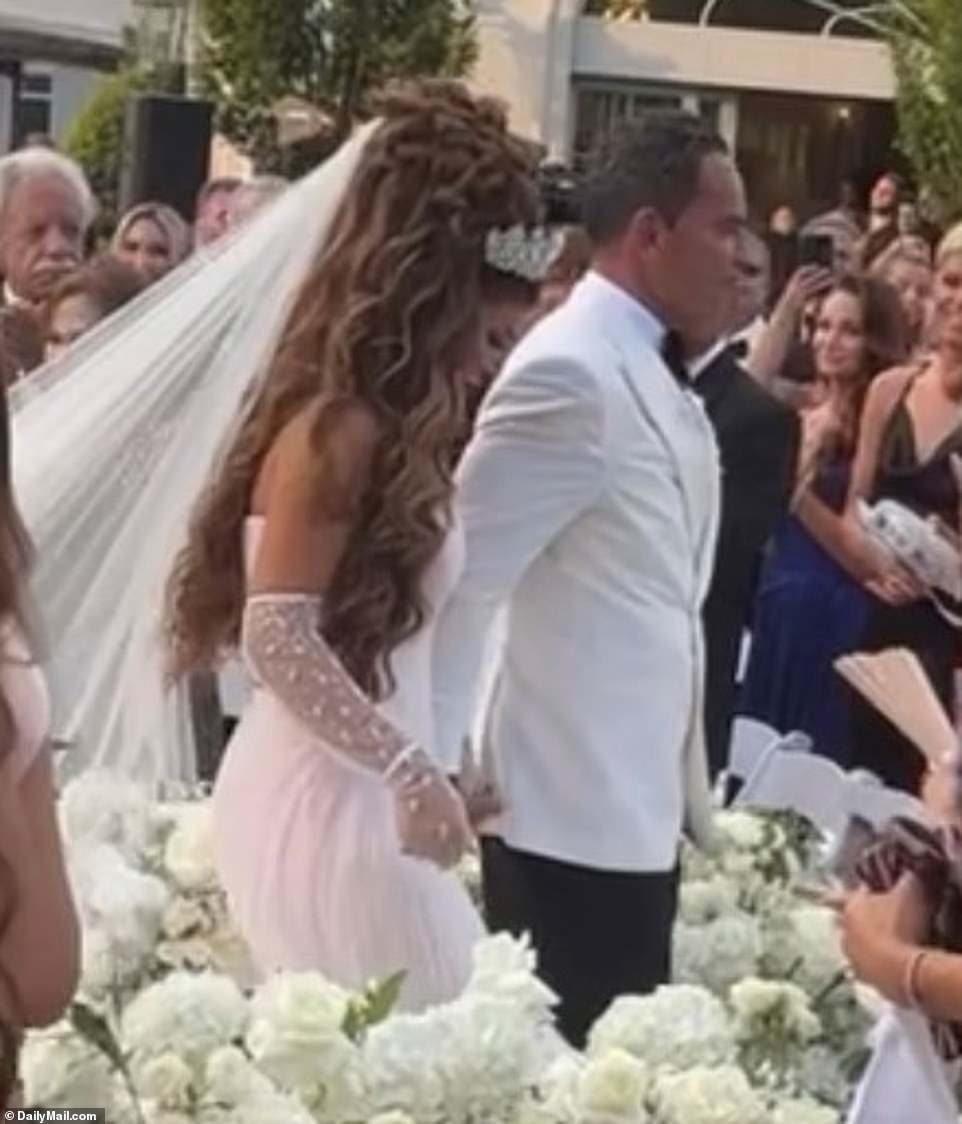 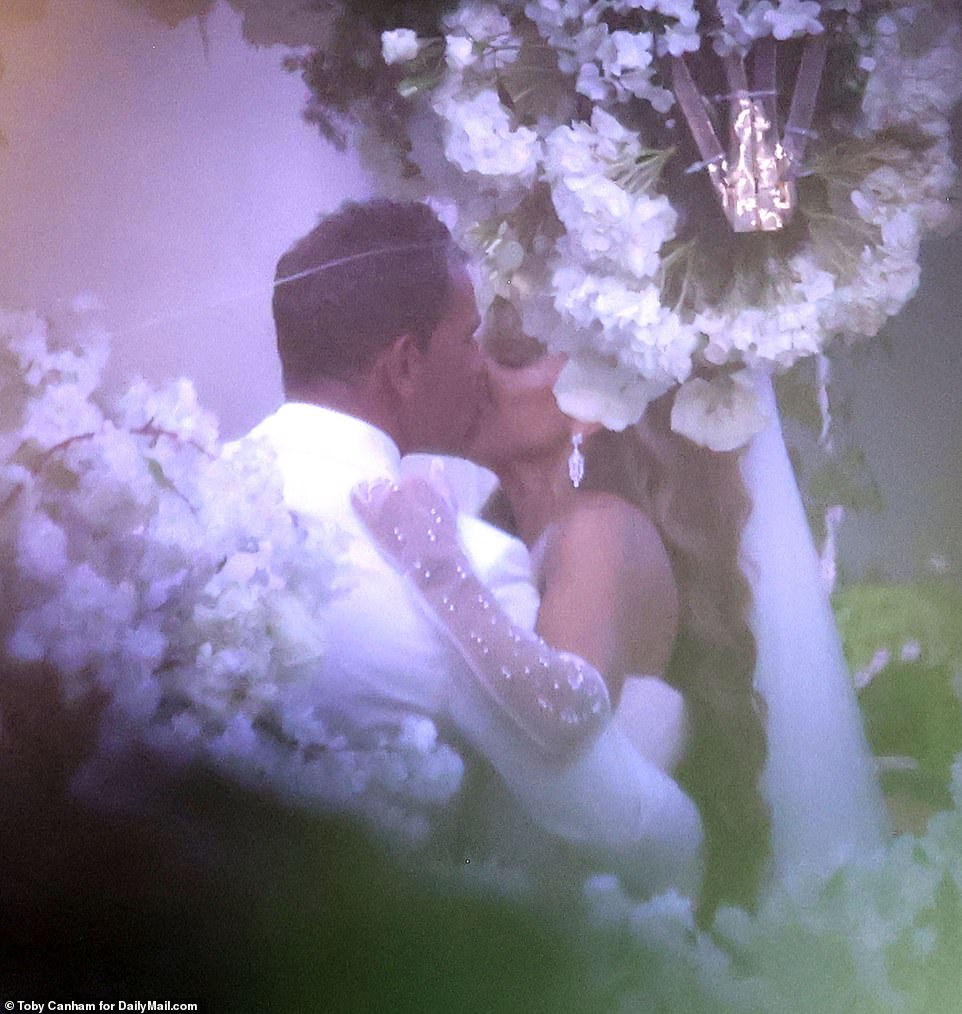 Sealed with a kiss! Teresa Giudice and Luis ‘Louie’ Ruelas have made it official exchanging vows and a kiss before a congregation bristling with reality TV stars

Giudice got together with the man she now calls her soulmate in July 2020 – two months before her divorce from scandal-ridden Joe was finalized. The couple didn’t go public with their relationship until later that year.

Even by the standards of reality television Giudice’s love-life has been turbulent embracing as it has her own stint in prison when she was found guilty of mortgage fraud alongside Joe.

She served 11 months of a 15-month sentence in 2015 with the judge staggering her sentence and Joe’s allowing one to remain with their children while the other did their time.

But while she was initially determined to stand by her man, Giudice’s 20-year-marriage to Joe quickly crumbled on their mutual releases, with hotly denied rumors of infidelity on both sides. They separated in December 2019 and their divorce was finalized in September 2020.

By then Giudice had already found romance with Ruelas. The father of two sons, Louis Jr and Nicholas, has had his own brushes with controversy in the form of allegations of domestic violence against his ex-wife Marisa DiMartino.

On one occasion he allegedly pushed DiMartino into a metal pole. DiMartino refused medical attention and declined to press charges though a police report was filed.

In another report filed by DiMartino on New Year’s Eve 2010 she claimed that a ‘verbal dispute’ with her then husband had forced her to leave the family home. Again, no arrests were made, nor charges pressed.

For her part, Giudice had no hesitation in saying ‘yes’ when Ruelas popped the question on a vacation in Greece with former housewife Dina Manzo, 50, and her husband David Cantin, 42.

Speaking to People magazine when news of their engagement broke in October 2021 a source said, ‘It was absolutely exquisite. The choreographed fireworks display illuminated a ‘Marry Me’ sign as Louie got down on one knee. Teresa was completely surprised.’

The group celebrated until 5am drinking champagne and dining on lobster, sea bass and lamb chops in the Amanzoe Resort in Porto Heli’s restaurant, Nama.

As their Friday afternoon rehearsal came to an end Giudice and Ruelas shared a tender kiss before hopping in his G-Wagon together for the quick spin round to the on-site hotel, the Grand Chateau, where they and other members of the bridal party, all in high spirits, checked in.