By the eight-minute mark they were chanting his name. ‘Rodrygo, Rodrygo’ echoed around the Santiago Bernabeu – a stadium, so hard to tame, that by this point he had them eating from the palm of his hand.

The Brazilian Rodrygo Goes, just 18-years and 301 days old, had scored twice in six minutes. He was making it all look so easy. He completed the perfect right-foot, left-foot, header, hat-trick right on full time.

On four minutes he got the first in Real Madrid’s thumping 6-0 win over Galatasaray. 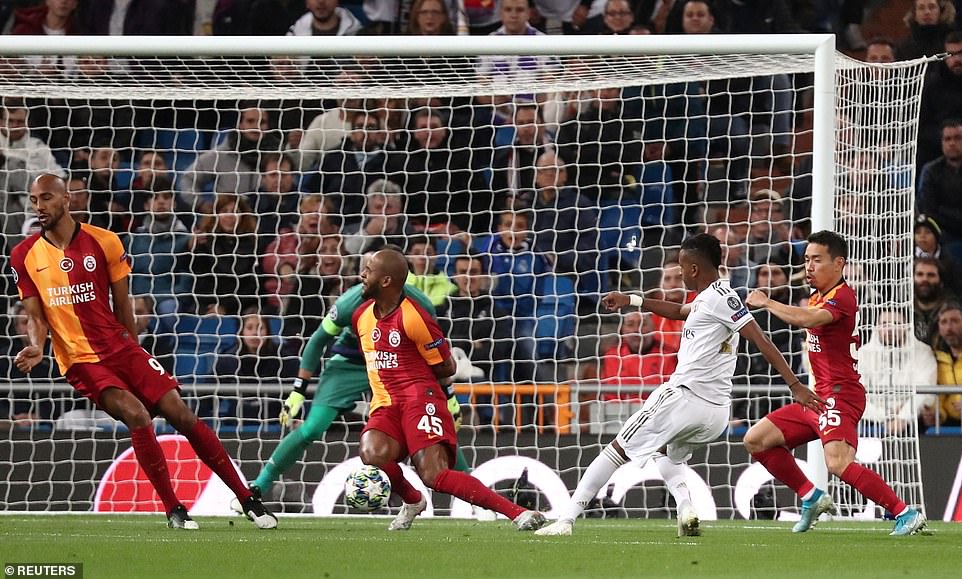 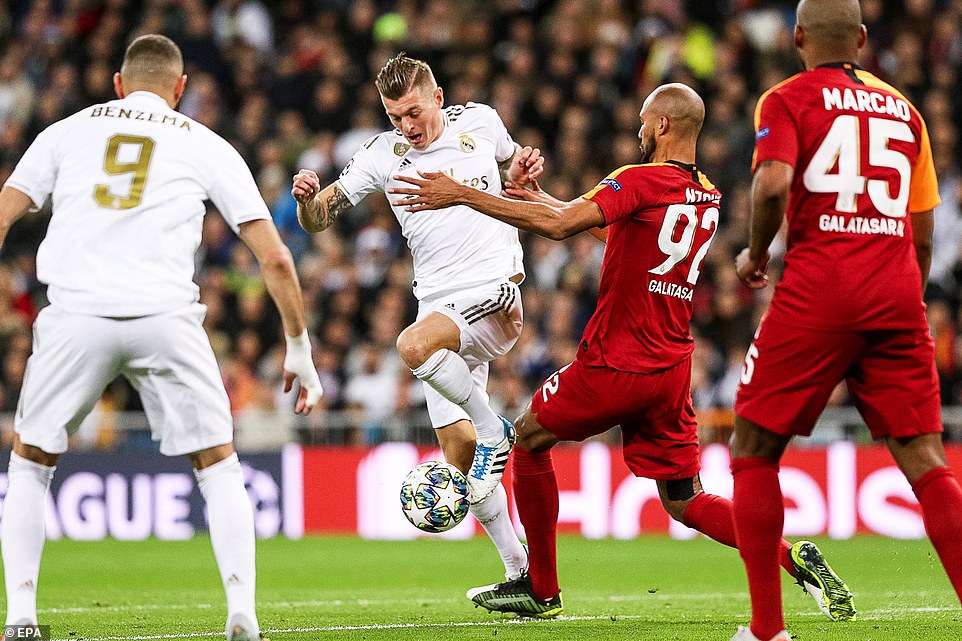 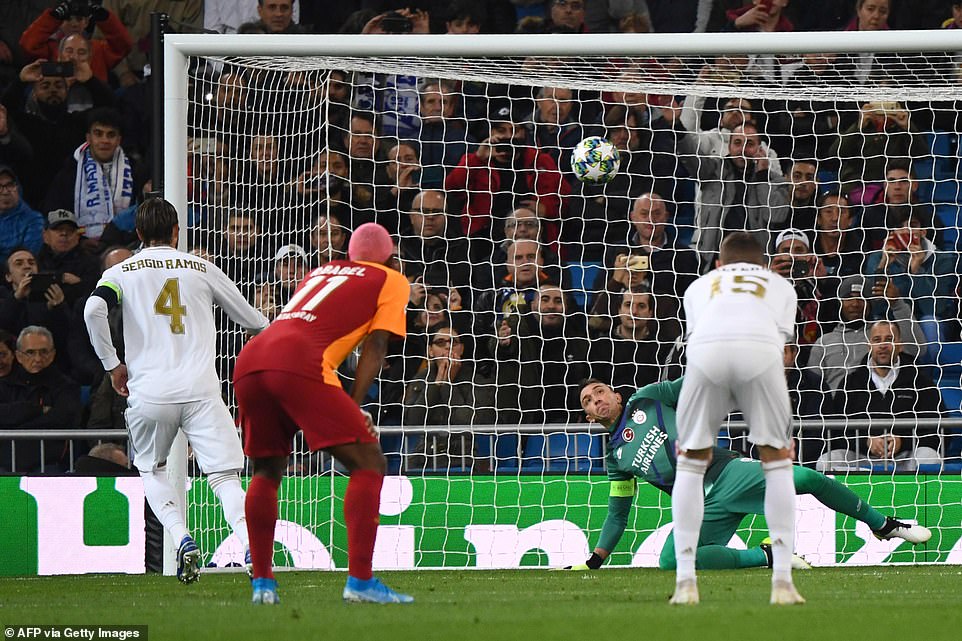 Sergio Ramos made no mistake from the spot, sitting the keeper down before chipping down the middle to make it three 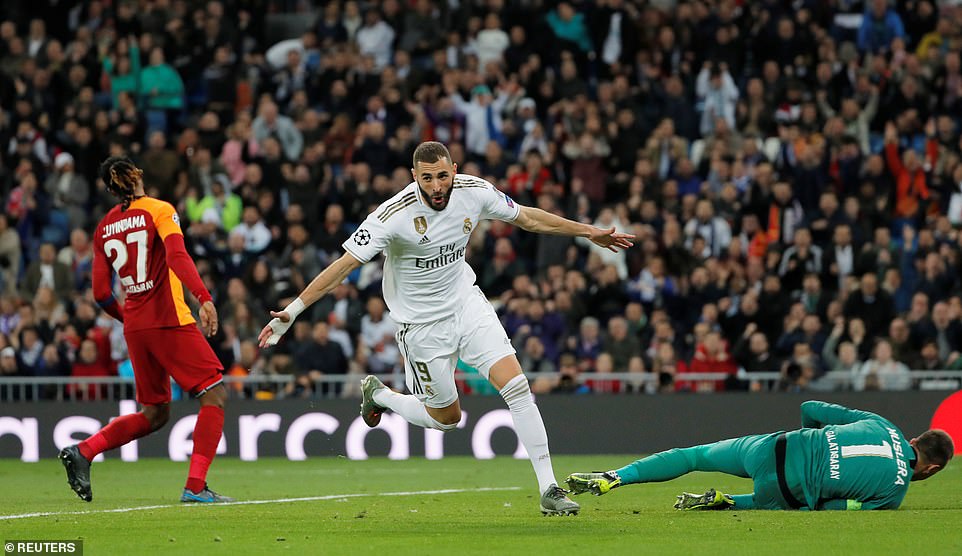 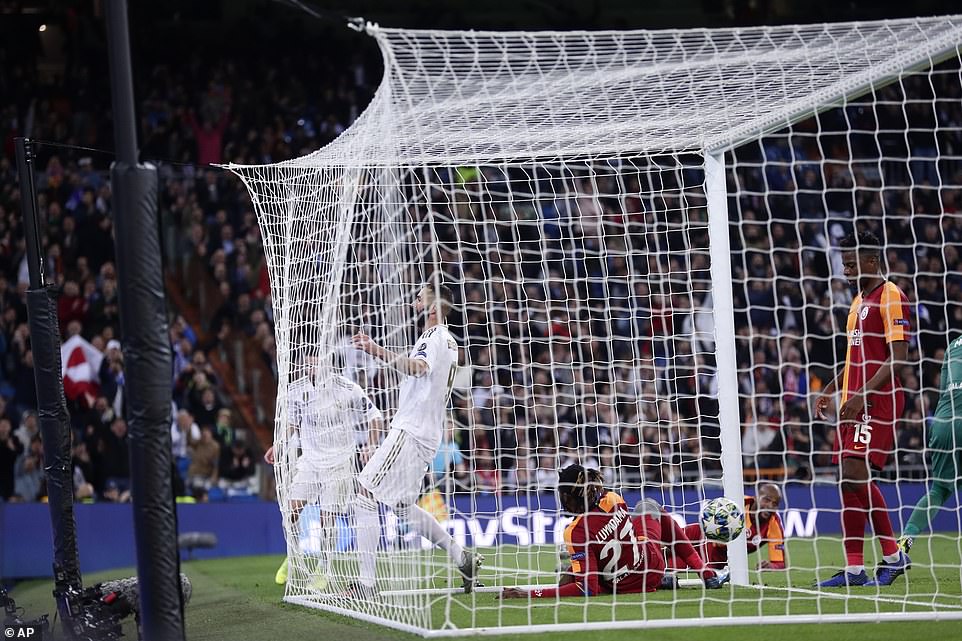 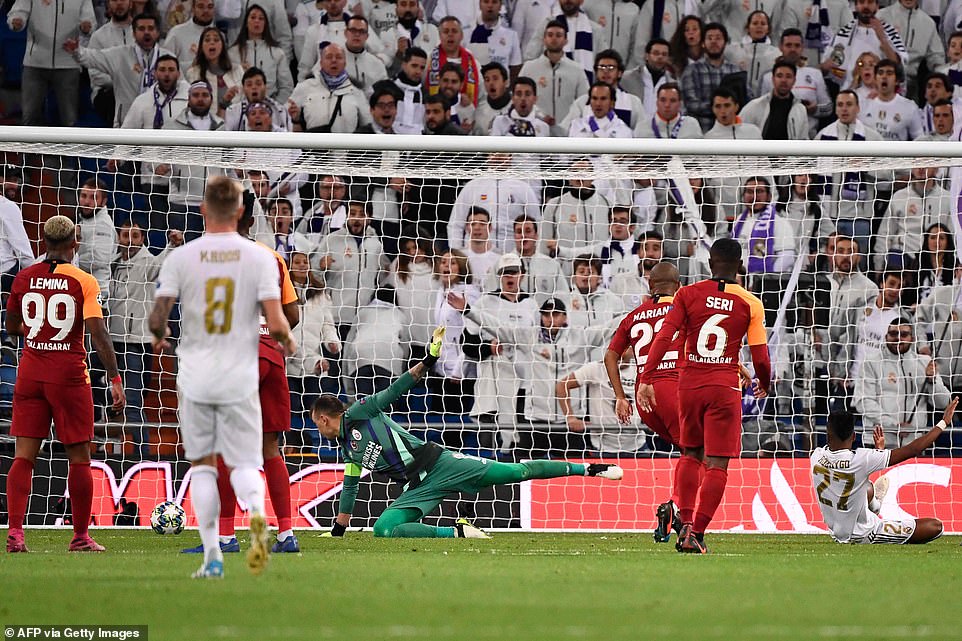 Real Madrid are on the brink of qualifying from Group A after their 6-0 drubbing of Galatasaray on Wednesday evening.

Marcelo crossed from the left and he calmly took the ball down, dragged it inside with his right foot and buried it low past Fernando Muslera with his left.

The numbers were high at the back for Galatasaray but with Mario Lemina, wearing 99 on his shirt, sent skidding the wrong way, Yuto Nagatomo wearing shirt number 55 also left floundering, and Steven Nzonzi, wearing 92, a helpless spectator, Rodrygo came out on top.

Goal number two, on seven minutes, was a header from another Marcelo cross. Galatasaray were giving Madrid room and with the chances dropping to the lethal Rodrygo they were already out of sight. He nodded this one in unmarked on the edge of the six-yard box.

That was his fourth goal for Madrid from his fifth attempt in his so far short Real Madrid career. 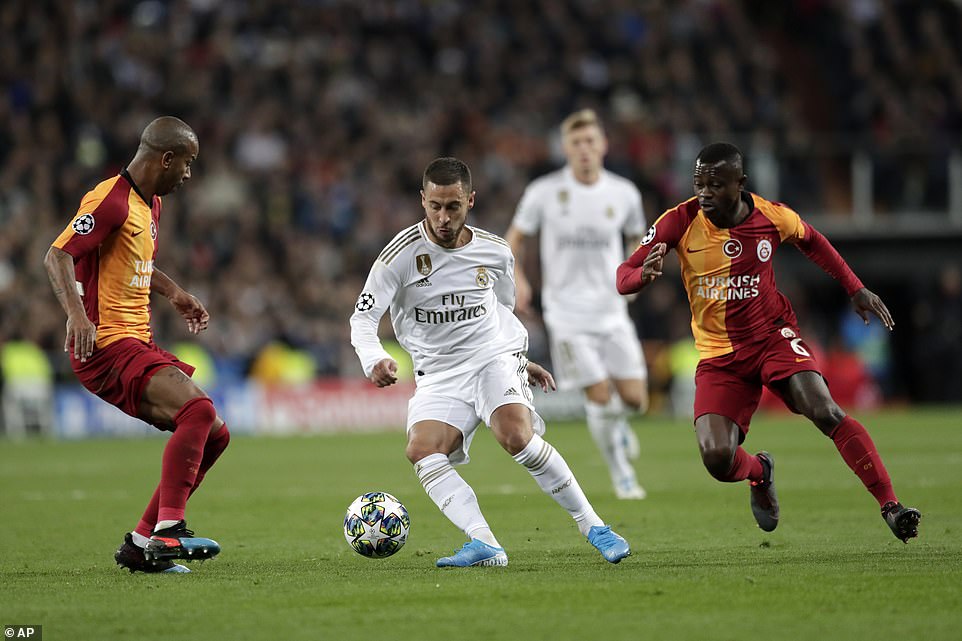 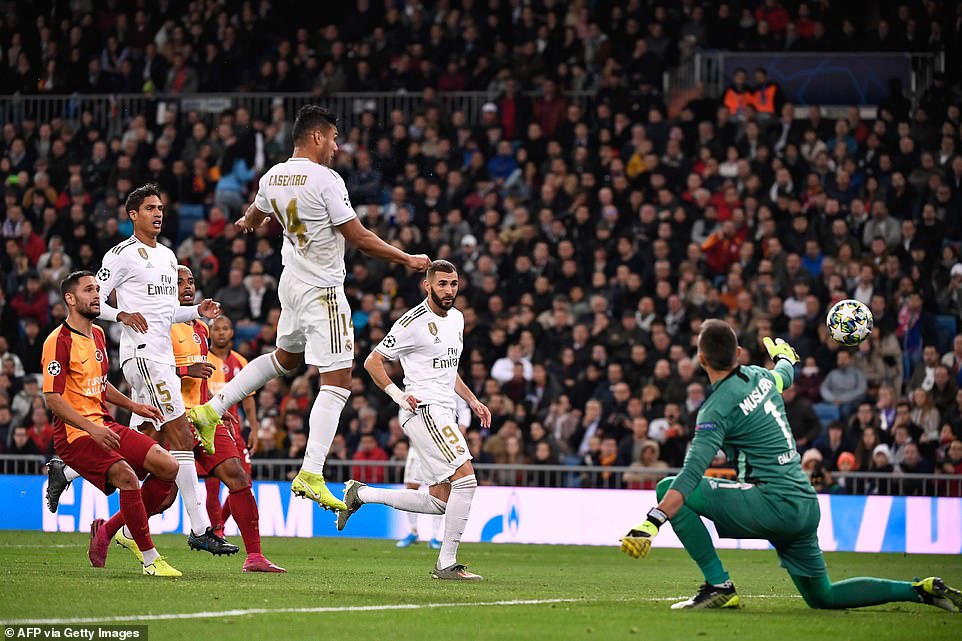 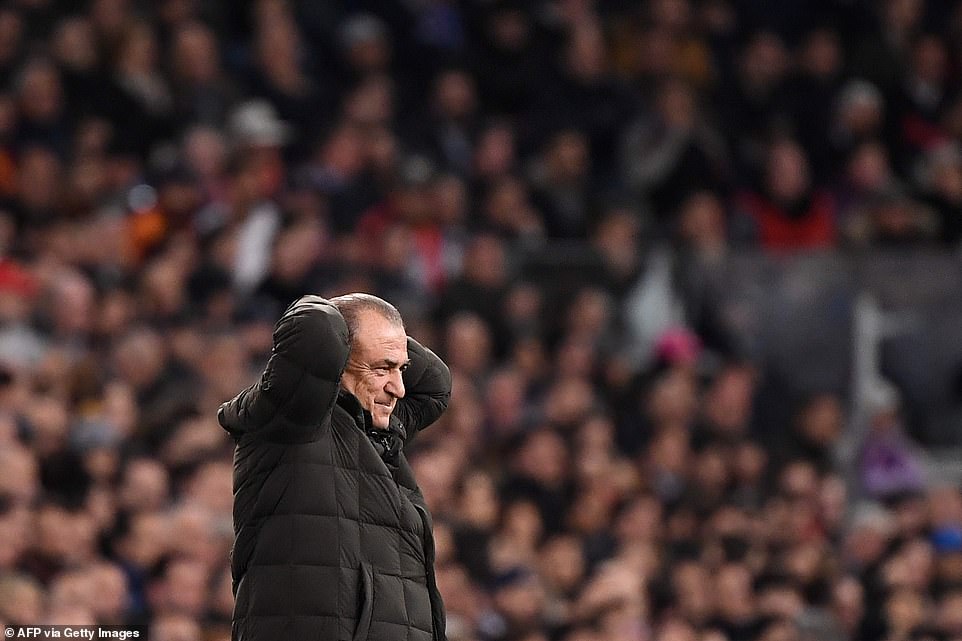 Things got worse for Galatasaray when Nzonzi clumsily stamped on Toni Kroos’ foot just inside the area. Referee Felix Zwayer didn’t spot the infringement but he assured Kroos that VAR would study the incident to placate his insistent complaints.

Once Zwayer had seen the incident on the pitch-side monitor he was left in no doubt and the spotlight turned on Sergio Ramos who loves to be centre-stage. He scored his 16th consecutive penalty – nine of them have been Panenka dinks, this one was too.

Now 3-0 down after only 14 minutes, Galatasaray looked like a team that had turned up on the wrong pitch on the wrong night playing an opponent and in a competition that was well beyond their level.

Eden Hazard danced along the touchline on one brilliant run and spun away from Mariano Ferreira at the start of another. Casemiro scored a fourth but it was ruled out for offside.

On 45 minutes Benzema did get goal number four and this time Rodrygo was the assist provider. He was gifted possession by Galatasaray down the right and he crossed for the French forward to score his 61st Champions League goal. 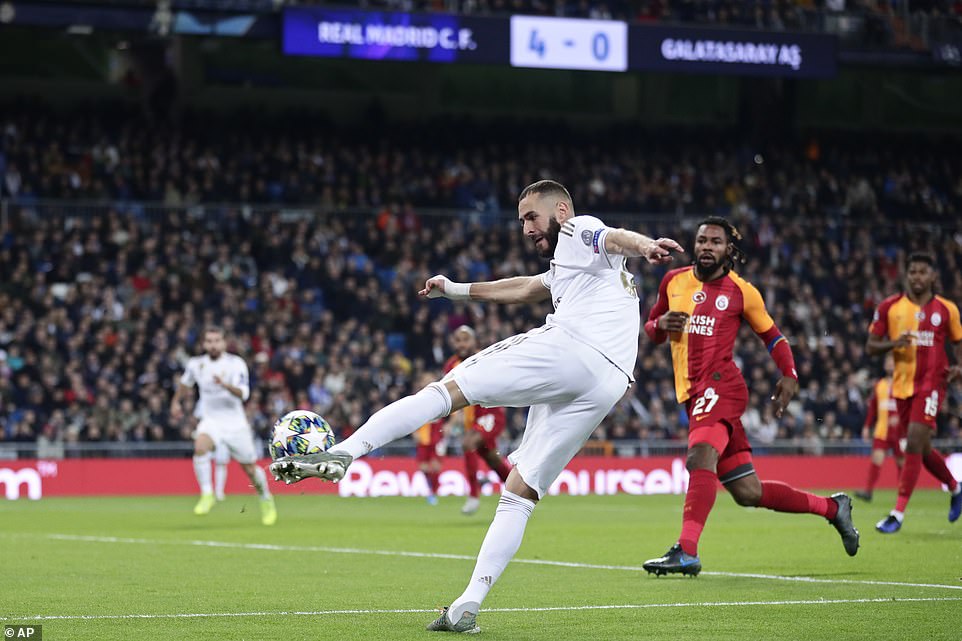 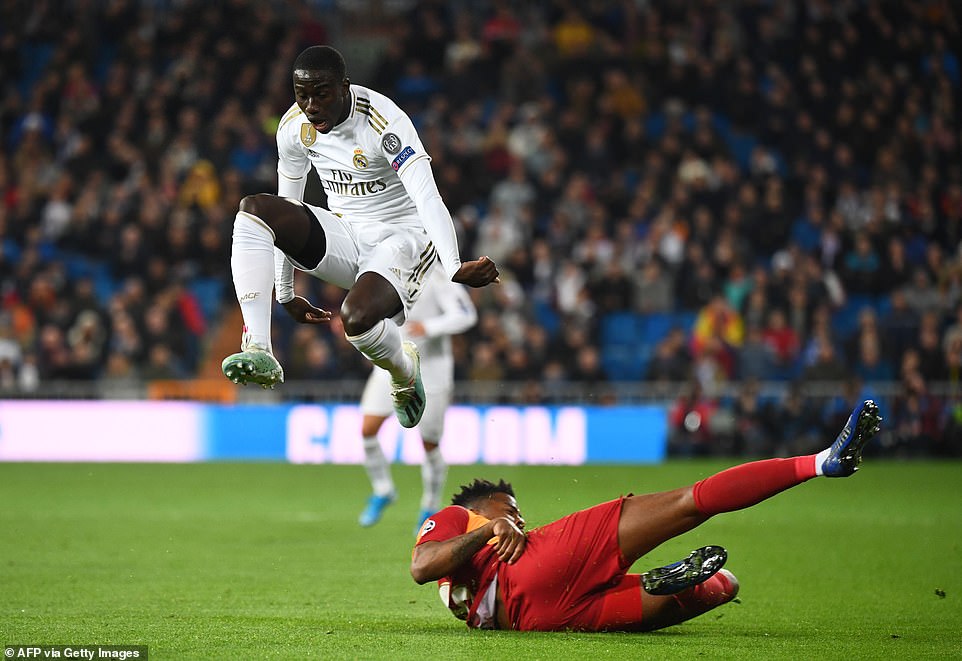 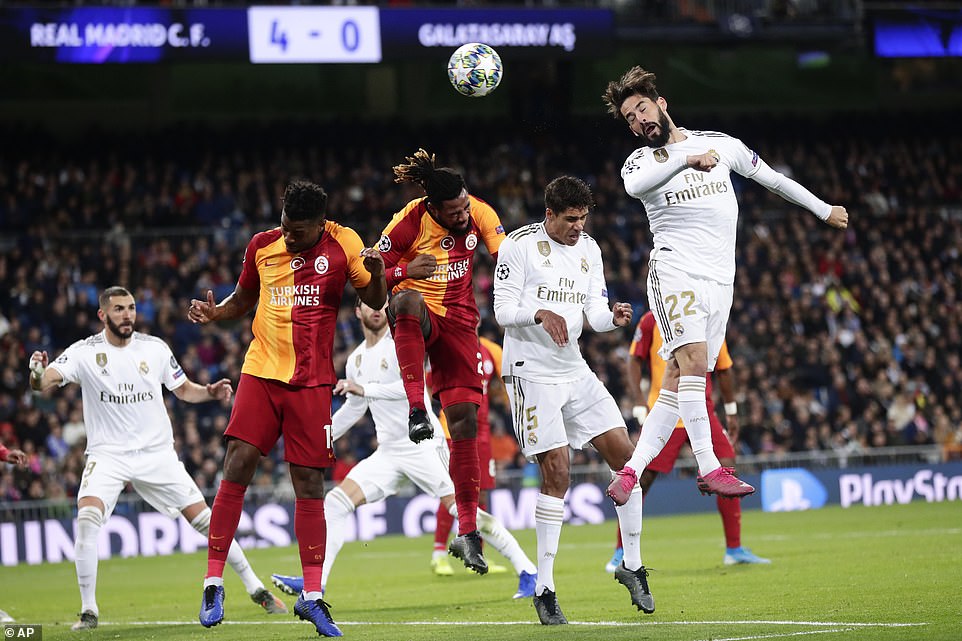 The only negative from the first half was the sight of Marcelo going off with an injury. Ferland Mendy came on. Luka Modric joined him on the hour replacing Casemiro – he rarely gets a rest; Wednesday night was a good night for that.

Kroos was denied by Muslera as he shot from distance in search of the fifth. And that was the cue for Hazard to get an early cut. Isco replaced him and nearly scored within seconds. Muslera tipped his header over.

Modric would make the fifth playing Dani Carvajal down the right. He crossed first time and Benzema nudged the ball over the line from close range.

It was also his 50th goal in Europe for Madrid putting him ahead of Alfredo Di Stefano as the third highest scorer in Europe at the club. With 62 goals only Cristiano Ronaldo, Lionel Messi and Raul are ahead of him in the all-time list.

Benzema gets better with age and Rodrygo, who rolled in his third with practically the last kick, is the new sensation who looks set to be here for the long haul. The game ended with the Bernabeu chanting his name again.

As bad as Galatasaray were this felt like the night when Real Madrid reminded Europe they are still contenders in this tournament.