Boston Red Sox centerfielder Jarren Duran had an inning to forget in Kansas City on Sunday.

Not only did the 25-year-old Californian drop a pair catchable fly balls, but Duran also found himself bickering with Royals fans seated in the Kauffman Stadium bleachers during Boston’s 15-3 loss on Sunday.

And as if the bottom of the seventh inning on Sunday wasn’t chaotic enough, he also managed to make an impressive diving grab during the frame.

I’m not going to attempt to defend Jarren Duran’s defense, but as a Red Sox fan I am certainly going to hope he snaps out of it. Seems like some form of the yips; clearly more mental than anything. He needs to stay silent and work on improving. #RedSoxpic.twitter.com/MF6RUEV0i0 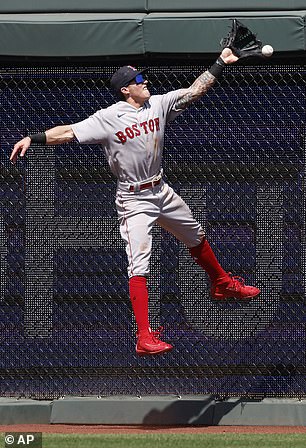 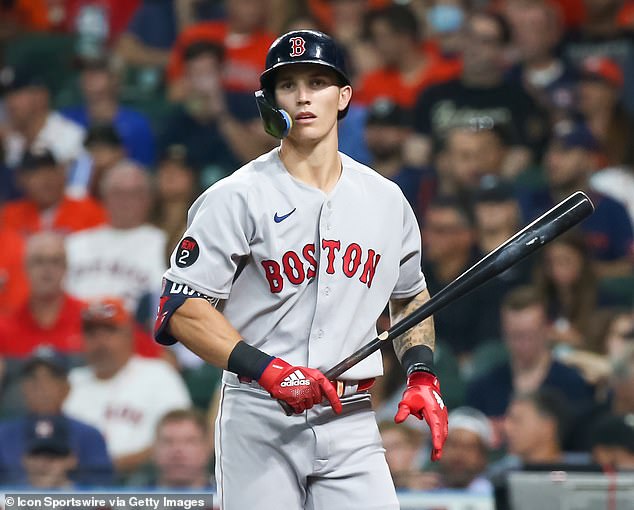 Duran has struggled in the field in 2022 and he’s currently hitting just .227 for the year

The disastrous inning began with Kansas City’s Nate Eaton popping up to center, where Duran appeared to lose the ball in the sun. Ultimately, after trying in vain to shield himself from the glare, Duran watched as the ball fell directly to his left and was forced to throw from his knees to prevent Eaton from scoring on the play.

The Royals’ Kyle Isbel then sent a fastball to the warning track on the next at-bat. Duran appeared capable of making a jump catch in front of the wall, but the ball deflected off his glove, resulting in a triple.

Duran redeemed himself with a diving catch on a fly ball from Royals catcher MJ Melendez, but Isbel was able to tag up and score on the play.

Things appeared to be getting better for Duran until he began bickering with fans in the bleachers and ultimately needed to be restrained by right fielder Alex Verdugo.

‘He appears to be going back and forth with fans out there,’ Red Sox announcer Dave O’Brien said.

Duran made a similarly painful error on an inside-the-park grand slam during the Sox’ historic 28-5 loss to the Toronto Blue Jays last month at Fenway Park.