Reese Witherspoon showed off her winning smile on Tuesday in Los Angeles while shooting her upcoming Netflix film Your Place Or Mine.

The 45-year-old actress and producer looked comfortable in a casual ensemble as she departed an SUV on her way to shoot a scene.

The Oscar winner put her trim legs on display in a cute denim skirt that reached down to her knees, which she paired with a reserved navy blouse.

Back to work: Reese Witherspoon showed off her winning smile on Tuesday in Los Angeles while shooting her upcoming Netflix film Your Place Or Mine

Reese’s dark top was enlivened with lighter blue floral designs, and she contrasted it with her olive military-style jacket with breast pockets.

She brought along a dark green bag which she clutched against her chest, and she completed her look with brilliant white trainers.

The Morning Show star had her long blond locks parted down the middle, and she added some sparkle to her look with modest hoop earrings.

Although she didn’t have a mask on, she had a large plastic shield attached to a collar around her neck. 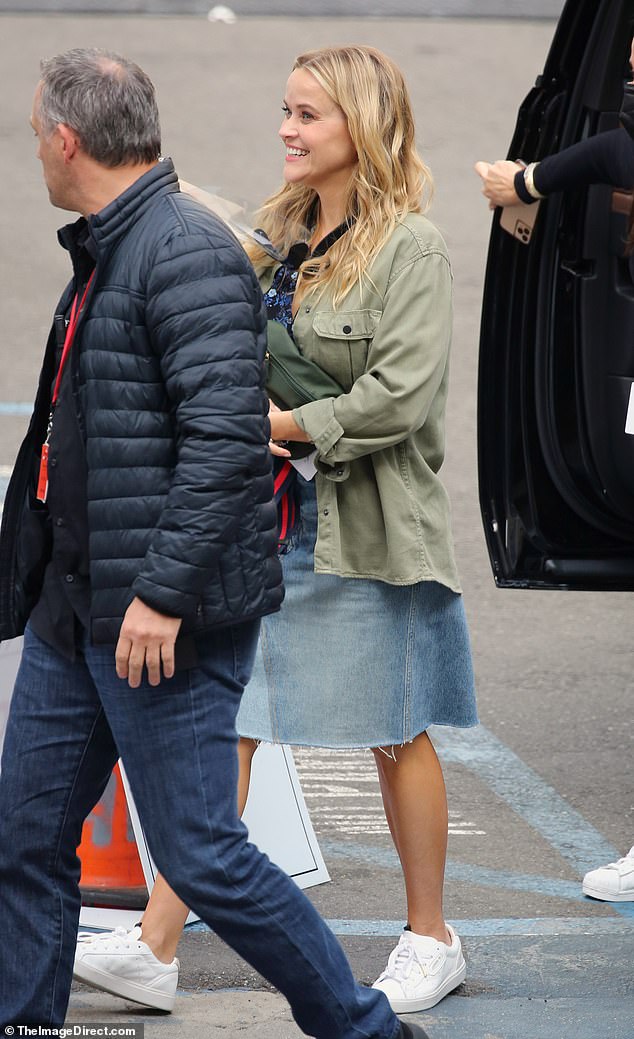 Leggy lady: The 45-year-old actress and producer looked comfortable in a casual ensemble as she departed an SUV on her way to shoot a scene

It’s not clear if Reese’s outfit was her costume for a scene, or if she still had to change after arriving on set.

She appeared to have a packet of papers in her hand, which may have been script pages.

Reese stars in Your Place Or Mine as Debbie, while Ashton Kutchers plays her best friend Peter.

They live on opposite coasts of the US, but they both switch homes for a week while she pursues one of her goals and he watches over her son. 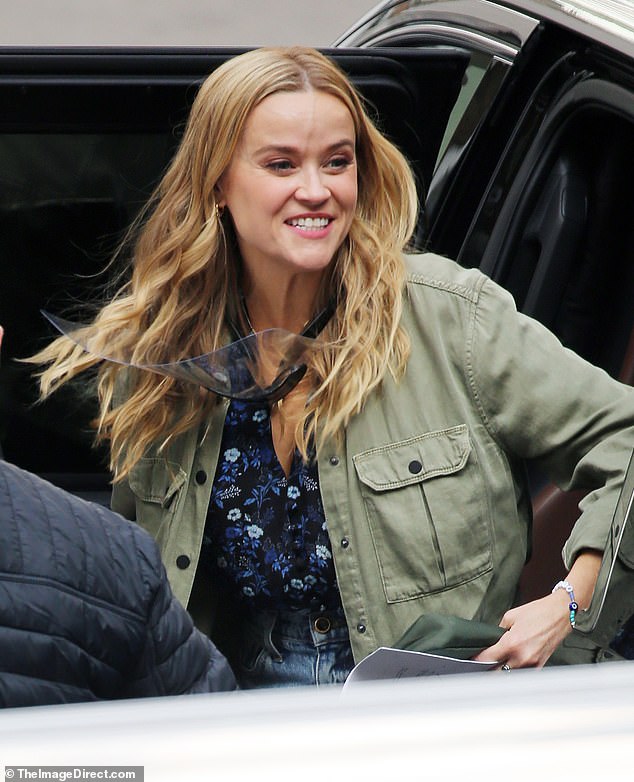 Trading places: She stars with Ashton Kutcher as a pair of best friends living on opposite coasts who switch houses for a week to pursue once-in-a-lifetime opportunities

Reese has stayed remarkably busy in recent years as she has put a larger focus on producing.

In addition to serving as an executive producer on The Morning Show and past efforts including Big Little Lies and Little Fires Everywhere, Reese is at work on several new projects, including the Riley Keough–starring series Daisy Jones & The Six, a live-action film about Peter Pan’s fairy Tinker Bell, and a third entry in the Legally Blonde series. 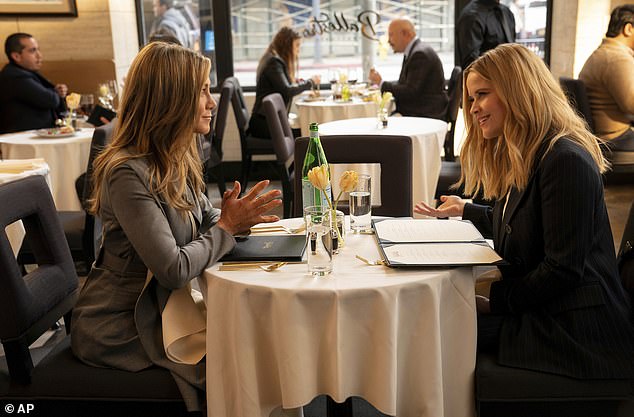 Unstoppable pace: Reese was featured earlier this year on season two of Apple TV+’s The Morning Show with Jennifer Aniston, which is among a bevy of new projects she’s producing

Despite plowing ahead with film and television projects, Reese shared with Gayle King this week that her children remain her ‘first, most important priority.’

In their cover interview for InStyle, Reese wondered if her children even realized how important they were to her.

The Walk The Line star shares her oldest children — Ava Phillippe, 22, and Deacon Phillippe, 18 — with her ex-husband Ryan Phillippe, while she and husband Jim Toth share nine-year-old Tennessee. 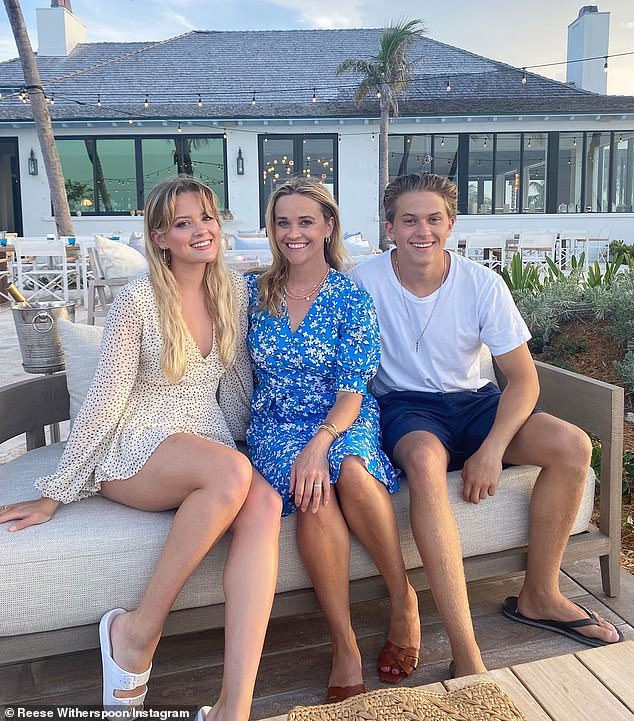 Flattered: On Monday, Reese told Gayle King for InStyle that she loves being mistaken for her mini-me daughter Ava Phillippe (L) because it makes her ‘feel so young’; pictured with Deacon Phillippe (R)

Reese opened up about the experience of raising children in the public eye, after the New Orleans native had had a much more private childhood.

‘It’s an odd situation because I didn’t grow up famous. So [Ava is] living an experience that I did not have, and so are my sons,’ she said. ‘We are lucky enough to have friends who grew up in Hollywood and can help give them advice on how to navigate.

‘Ava is so down-to-earth,’ she add. ‘She wants to do great things in the world. She’s studying and learning and trying to find herself. It’s a big thing in life to try different things and figure out what is really your path.’

Reese didn’t seem to mind being mistaken for her lookalike daughter sometimes, as she said it makes her ‘feel so young.’

However, the comparisons sometimes bothered Ava, who was often in touch with her friend Zoë Kravitz, because she’s also often mistaken for her famous mother Lisa Bonet. 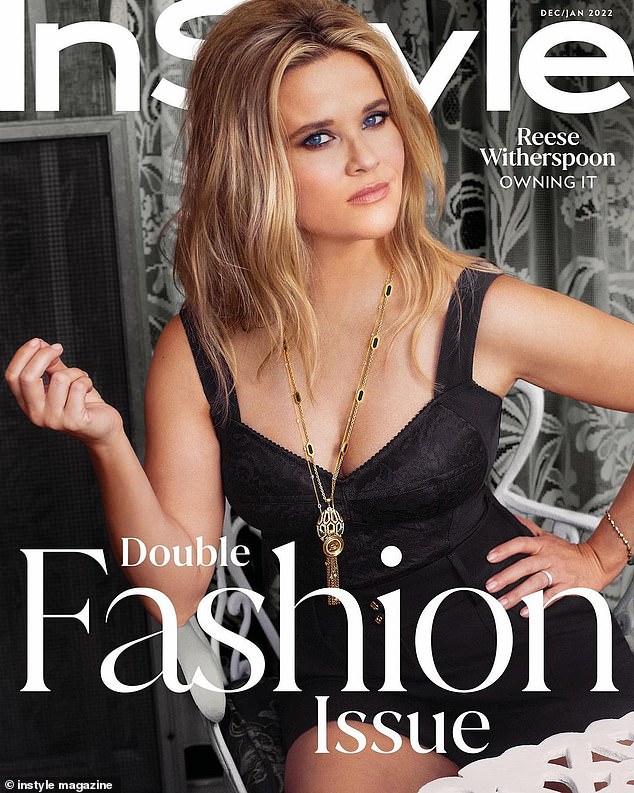 A splashy cover: She was criticized for looking very different on her InStyle cover this month