Richmond coach Damien Hardwick has defended two of his star players after they brawled with a patron in a nightclub over the weekend.

Rioli, 24, confronted the patron and was punched in the face, suffering a cut under his eye that required two stitches.

Teammate Shai Bolton, 22, then stepped in and sustained a fractured wrist during the melee – leaving him sidelined for three weeks.

Hardwick rushed to the defence of both players on Monday night and said he believed many people would have reacted the same way. 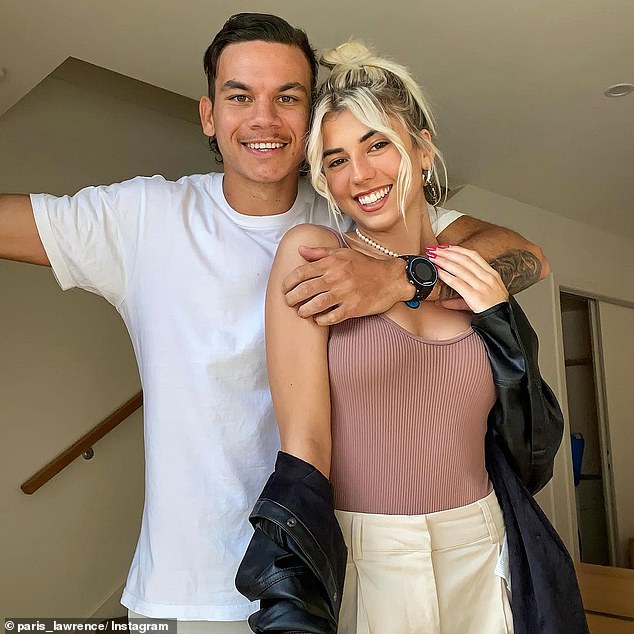 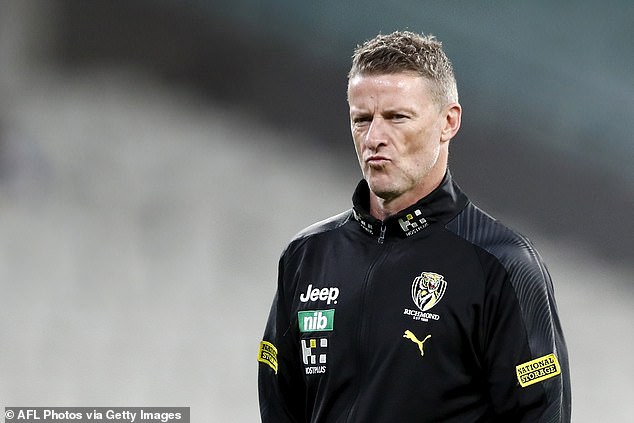 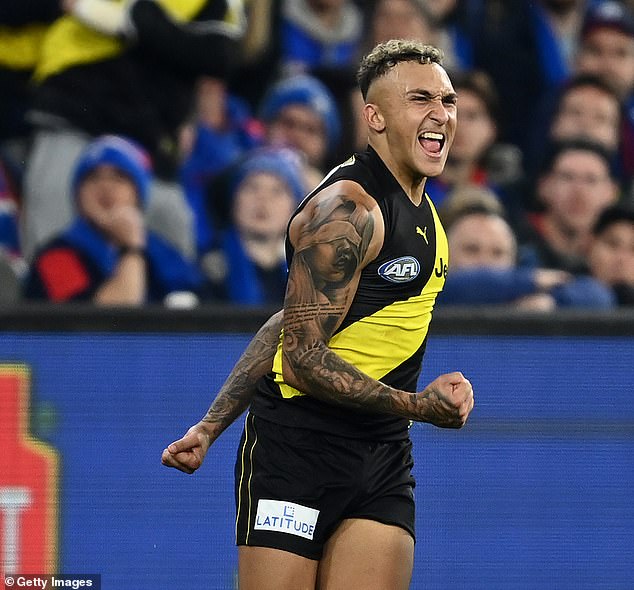 ‘A player’s partner was put in an inappropriate situation that she didn’t feel comfortable with and Daniel stood up and tried to eradicate the situation and was punched in the eye,’ Hardwick told Fox Footy.

‘I don’t condone violence but the reality is, you put anyone in that situation, they’re going to stand up for their partner and their mates and Shai was the same.

‘So, look, it was a difficult situation. It’s not one ideally we want to be in but the reality is we are where we are.’

Hardwick said football bosses Tim Livingstone and Blair Hartley had spoken at length with Bolton and Rioli and the Tigers were ‘absolutely’ confident there was no wrongdoing on their behalf.

‘We’ve got to the bottom of it – the evidence we’ve got and the story we have. So from our point of view, we back in the players,’ Hardwick said.

‘We’re disappointed it came to that situation, we don’t condone violence, but we understand these situations happen from time to time – though it doesn’t make it right.’

Hardwick said while the duo were entitled to ‘live a life’, the incident was a reminder to AFL players they had to be careful.

‘The fact of the matter is, they’re different. They’ve got to sort of, they’re really in a bubble in a way, they’ve got to be careful with where they go. And once again it’s another reminder that these situations can occur when they go out,’ he said.

It’s understood neither Rioli or Bolton were under the influence of alcohol, and aren’t expected to face disciplinary action from the club. 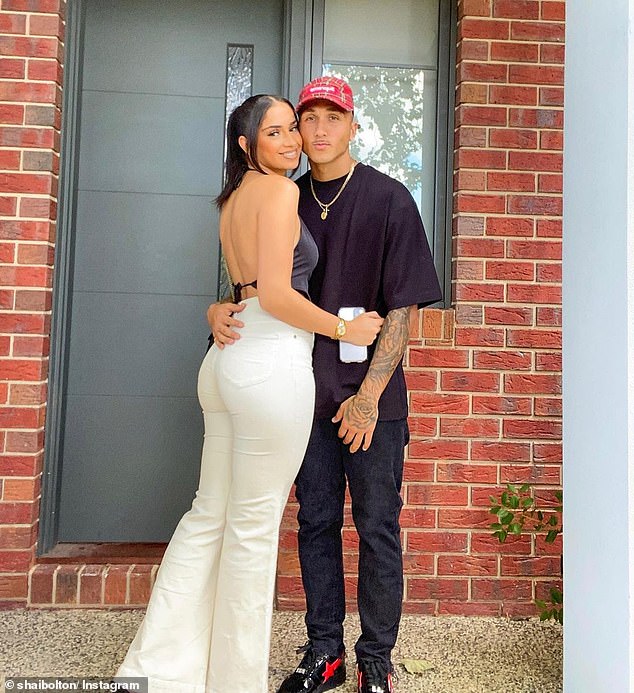 Bolton will be sidelined for the next two to three weeks due to his wrist injury. Pictured with his girlfriend 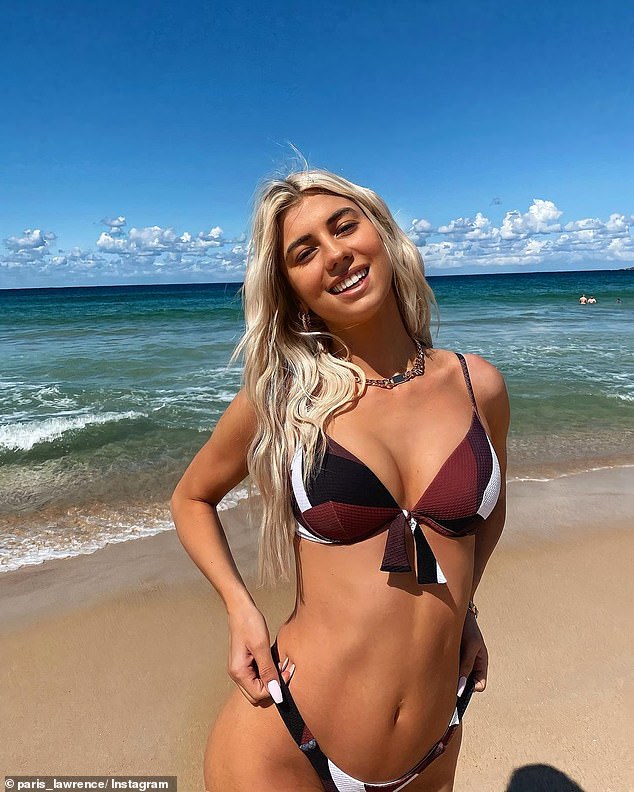 Rioli’s girlfriend Paris Lawrence has more than 28,000 Instagram followers, and is managed by the same team as DJ Havana Brown

Two-time premiership player Bolton has averaged 21.8 disposals and more than a goal a game this season, including six goals across his past two outings.

‘It’s disappointing. He’s is in great form, there’s no doubt about that. He’s one of the form players of the competition,’ Hardwick said.

Bolton, who is out of contract at season’s end, also hauled down a mark of the year contender in the Tigers’ loss to Geelong on Friday night. 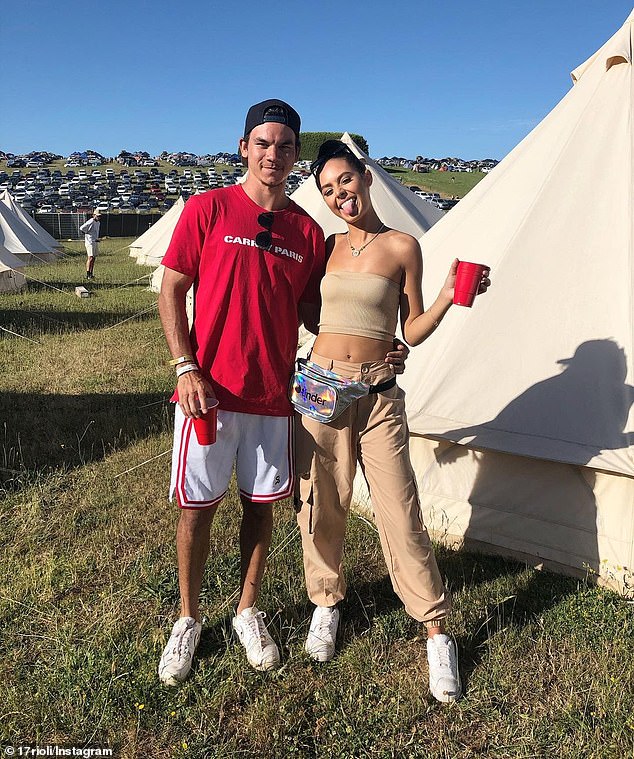 Lawrence has more than 28,000 Instagram followers, and is managed by the same team as DJ Havana Brown.

The 21-year-old confirmed her split from Rioli in February 2020 after two years of dating.

‘Daniel and I are no longer together; however, we still love and care for each other very much and remain the best of friends,’ she wrote on Instagram at the time.