Rising acidity in the world’s oceans could have dire consequences for millions, experts warn

Rising acidity in the world’s oceans could have dire consequences for millions, experts warn

Rising acidity in the world’s ocean’s could have disastrous consequences for millions of people who depend on the seas for their livelihood, new research has warned.

Scientists have been studying the consequences of on marine life and coastal human populations.

They examined pockets of ocean acidity created by carbon dioxide seeping from volcanoes.

These create the kind of ocean conditions experts expect in the future if carbon dioxide levels continue to rise in the atmosphere due to the burning of fossil fuels.

Impacts on marine life can affect the wider food chain as well as fishing industries – having more widespread social and economic consequences.

Ocean acidification could have disastrous consequences for millions globally who depends on it for their livelihood, new research has warned. The photo shows Professor Jason Hall-Spencer conducting a survey off the coast of Japan

The studies were conducted by the University of Plymouth and Tsukuba’s Shimoda Marine Research Centre in Japan.

They were based around the coast of Japan, where rising ocean acidity – known as acidification – is having a major impact on marine life, and in the Mediterranean where it was affecting the wild fish population.

These seeps have shown that reefs made by organisms with shells or skeletons- including oysters and corals – are sensitive to ocean acidification.

This increases the risks to goods and services that are ocean based that already result from climate change.

It could lead to shifts in seaweed dominance, habitat degradation and a loss of biodiversity including in many coastal regions. 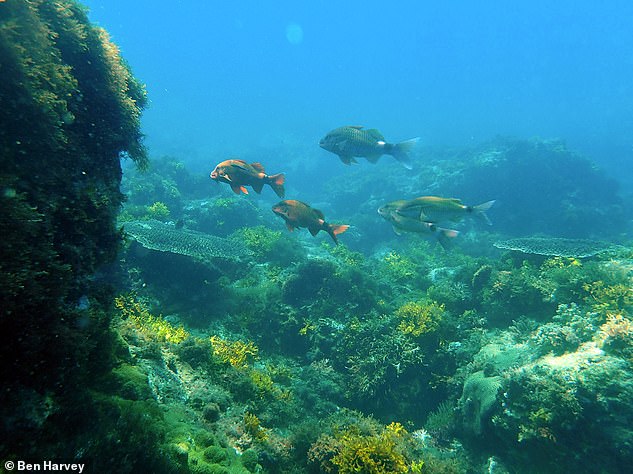 Dr Ben Harvey, Assistant Professor at the University of Tsukuba’s Shimoda Marine Research Centre, said: ‘We are releasing around 1 million tons of carbon dioxide per hour into the Earth’s atmosphere.

‘About 25 per cent of this gas is taken up by the ocean where it reacts with seawater to form a weak acid, causing surface ocean pH to fall by around 0.002 units per year.

‘The chemistry of this rapid change in surface waters is understood, yet there is uncertainty about its effects on society which is what we are trying to overcome in this study.’

Professor Jason Hall-Spencer, Professor of Marine Biology at the University of Plymouth and the report’s lead author, added: ‘The Paris Agreement on climate change was welcome.

‘But it does not mention ocean acidification, nor the fact that this rapid change in surface ocean chemistry undermines the social, economic and environmental pillars of sustainable development.

‘The time is ripe for a ‘Paris Agreement for the oceans’, with the specific target to minimise and address the impacts of ocean acidification, including through enhanced scientific cooperation at all levels.’

The full report is published in Emerging topics in Life Sciences.

WHAT IS OCEAN ACIDIFICATION?

The ocean absorbs about 30 per cent of the carbon dioxide that is released in the atmosphere, and as its levels increase, so do the levels in the ocean.

When carbon dioxide is absorbed by seawater, a series of chemical reactions occur resulting in the increased concentration of hydrogen ions.

This increase causes the seawater to become more acidic which at the same time causes carbonate ions to become less abundant.

Carbonate is an important building block of sea shells and coral skeletons.

These changes in ocean chemistry can affect the behaviour of other types of organisms, affecting fish’s ability to detect predators in more acidic waters.

When these organisms are at risk, the entire food web may also be at risk.

Ocean acidification is affecting the entire world’s oceans, including coastal estuaries and waterways.

Many economies are dependent on fish and shellfish and people worldwide rely on food from the ocean as their primary source of protein.