Risk of another pandemic is HIGH, Chris Whitty warns

Professor Chris Whitty pictured at the summit today in the Science Museum, London

There is a ‘relatively high’ risk of another pandemic within our lifetime, Britain’s chief medical officer suggested today.

Professor Sir Chris Whitty said there had been many ‘near misses’ in the past decade, pointing to Ebola and Zika outbreaks, warning that the ‘risks are there’.

Scientists believe modern living puts us at a greater risk of animal-borne pandemics, due to the global meat trade, farming and our closer interactions with animals.

‘If you just think about the last decade we have had three major outbreaks one of which is a pandemic. It includes Ebola in West Africa, which was a really major outbreak.

‘We have had a second significant outbreak of Zika and that is an infection which has travelled over many years from Uganda all the way through Africa to Latin America. And of course we have also had Covid.’

He was speaking at a conference hosted by the Coalition for Epidemic Preparedness Innovations (CEPI) in London, where it was revealed a UK-made vaccine to protect people against future pandemics has received global backing worth millions of pounds.

Sir Chris and Prime Minister Boris Johnson, who opened the summit via video link, hailed a new partnership between CEPI and DIOSynVax, a biotech spinout of the University of Cambridge.

The team at DIOSynVax is working on a vaccine technique to tackle known Covid variants and future ones, together with viruses that cause illnesses such as the original SARS and and MERS.

World leaders today pledged more than £30million to the project. 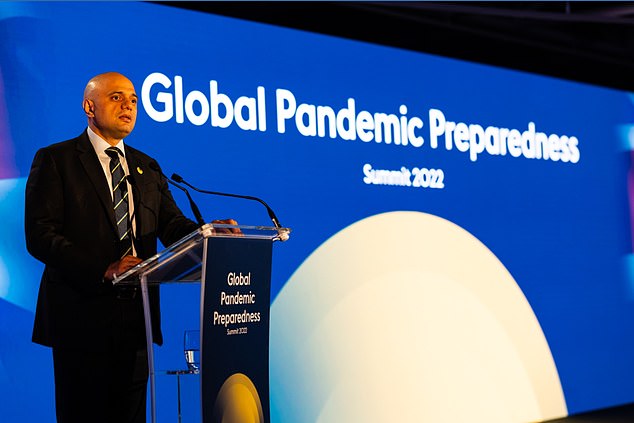 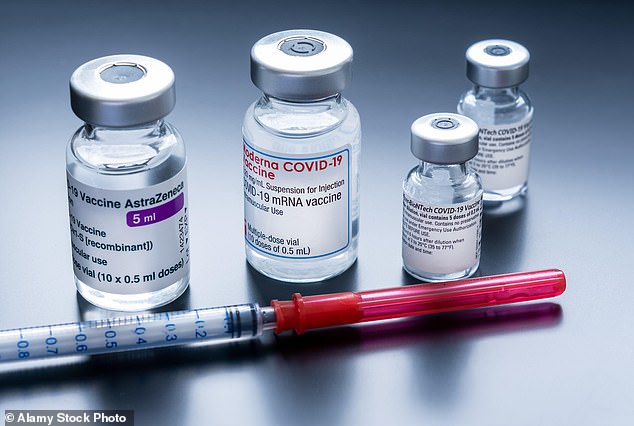 Pictured above are four vials of Covid vaccine. Funding awarded to Cambridge University today aims to help develop a jab that can protect against all variants

Mr Johnson said: ‘The UK is proud to have committed to a quarter of a billion pounds to support CEPI at the start of the pandemic, because it was precisely the partnership between CEPI, government, industry and academia which helped our vaccines to triumph over the virus.

‘And now, we must come together to support CEPI’s global plan for the next generation of vaccine technologies, such as the new variant-proof vaccine being developed at Cambridge University to help protect us against the next Covid variant, or indeed, against the next pandemic.’

The PM said this was a ‘crucial part’ of how countries can meet the ‘100-day mission… to make safe and effective diagnostics, therapeutics and vaccines available within the first 100 days of a future pandemic threat being identified’.

He added: ‘After the tragedy of the last two years, it is incumbent on all of us to work harder than ever in preparing to meet future pandemic threats.

‘That’s why we’re also leading international efforts to establish a pandemic treaty and an effective early warning system, or global pandemic radar, which can in turn inform the rapid development of new vaccines.’

The new funding will see CEPI invest up to around £32 million to support the development of a broadly protective vaccine using mRNA technology already adopted for the Moderna and Pfizer jabs.

DIOSynVax is working with the structure of proteins, computational biology and on boosting the immune system to work out how vaccines can be used to their best effect.

If the plan works, experts believe that vaccines could rapidly be developed against ‘Disease X’ – unknown pathogens that have yet to emerge but which could cause pandemics.

Dr Richard Hatchett, chief executive of CEPI, said: ‘The UK Government and the country’s world-leading scientific institutions have been pivotal to the global response to Covid-19.

‘From the development of the CEPI-supported Oxford/AstraZeneca vaccine – which is used in more countries than any other – to the ground-breaking Recovery trial to evaluate life-saving treatments like dexamethasone, British science has played a leading role in protecting the world from Covid-19.

‘I am excited to further strengthen CEPI’s strong ties to British science through this partnership with DIOSynVax.’

Professor Jonathan Heeney, chief executive of DIOSynVax, said: ‘Our approach is to be ahead of the next pandemic – to deliver custom designed, immune selected vaccine antigens – which is ideal to prevent diseases caused by complex viruses such as the large and diverse family of coronaviruses.

‘If successful, it will result in a safe, affordable NextGen vaccine for widespread use.’

‘Significant’ outbreaks over the last decade

Middle East Respiratory Syndrome (MERS), April 2012: This virus jumped into humans from dromedary camels around Arabia. It likely initially came from bats, before passing to camels and then humans.

People who catch the virus start suffering symptoms including fever and coughs about five days later.  Around a third die from the disease.

After the first outbreak, the virus has now been recorded in 27 countries and is behind 858 deaths.

Ebola, December 2013: An outbreak of this virus occurred in West Africa between 2014 and 2016, although it had been known to medics for years.

It is transmitted to humans from fruit bats, porcupines and monkeys, and can be transmitted between humans through contact with bodily fluids.

Symptoms include fever, aches and muscle pains and a loss of appetite. About half of those who catch it die from the disease.

In the most recent outbreak it spread to seven countries — including the UK and US, and led to 11,325 deaths.

Zika, March 2015: A major outbreak of this virus occurred in Brazil.

It is spread by mosquitoes, but can also be passed from human-to-human through sexual intercourse.

Most infections are asymptomatic, but some will develop a rash, headache and muscle pain two to seven days after infection.

Authorities began monitoring the virus after it was linked to microcephaly, when children are born with unusually small heads. It is not normally fatal, but can trigger devastating side-effects among babies.

Covid, March 2020: The most recent pandemic, this virus emerged in China. It likely came from bats, although there are mounting suggestions it could have escaped from a lab in Wuhan.

The virus is spread by droplets in the air emitted when someone coughs or sneezes. It can be spread before someone becomes symptomatic, suffering warning signs including a fever, cough and loss of smell.

More than 447million Covid cases have been confirmed to date and 6million deaths, although it is likely both are a significant under-estimate due to a lack of testing. It has spread to almost every country in the world.