The idea of posting the Duke and Duchess of Sussex to Africa to harness their ‘soft power’ potential as ‘rock stars’ is an interesting one – particularly in a week when the couple are expecting their first child.

Normally, the impending arrival of a royal baby would be more than enough to keep royal-watchers preoccupied. But, as with so much else, Harry and Meghan continue to break the mould.

However, relocating the couple abroad – an idea still firmly downplayed by the Palace as speculation – is not exactly new.

Monarchs have been packing off younger sons to far-flung parts of the planet for years.

The Duke and Duchess of Sussex hope to take a six-month ‘secondment’ to Africa in the next few years, it was revealed last night

In the 18th century, some of George III’s wayward younger sons were sent overseas and not allowed back for years.

So why Africa for the Sussexes? As Youth Ambassador for the Commonwealth, which spans 53 nations spread across every continent, the duke could presumably have set his sights on whichever part of the world appealed to him and his wife.

Yet he has always had a profound and special connection with Africa. In that regard, he is simply following firmly in the family tradition.

Africa was the very first foreign destination of our Queen. As Princess Elizabeth, she had never ventured south of the Isle of Wight until 1947 when she set sail with the King, Queen and Princess Margaret to thank pre-apartheid South Africa for its wartime support. 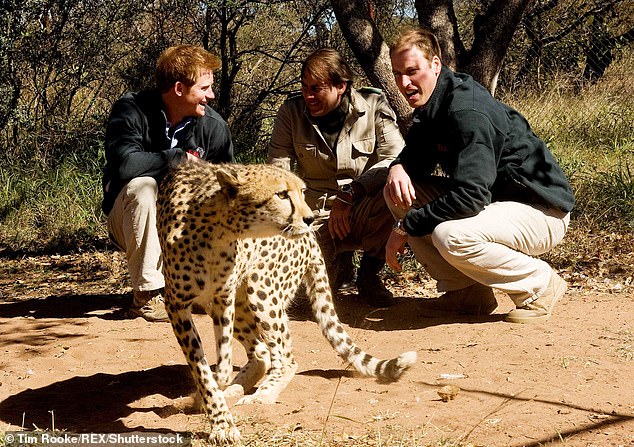 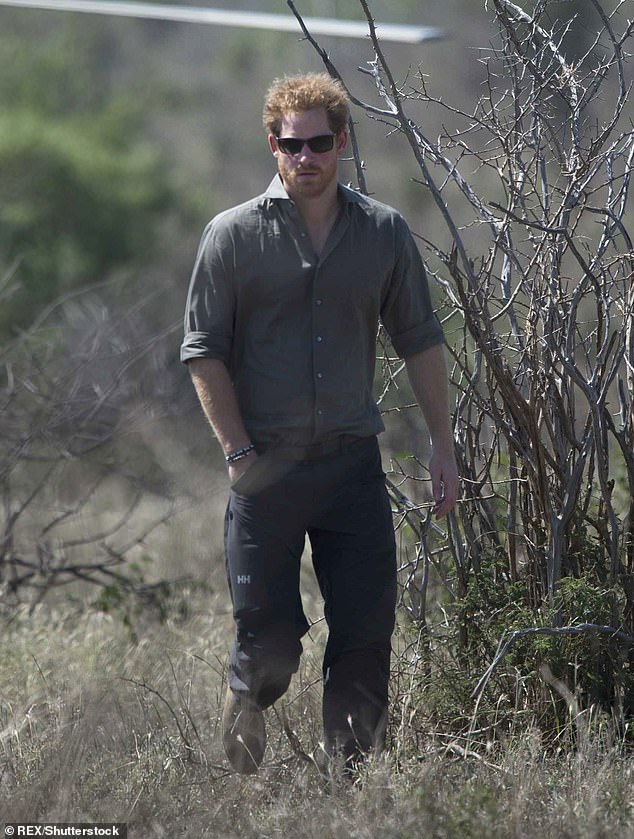 Yesterday the Queen marked her 93rd birthday in Windsor. In 1947, she marked her 21st in Cape Town, delivering one of the most important speeches of her life, pledging ‘the whole of my life’ to the service of ‘our great imperial family’. It was a coming of age in so many ways.

It was during this epic, arduous and spectacular 7,000-mile odyssey from the Cape to Rhodesia’s Victoria Falls and back again that the future Queen learned so much at first hand from her beloved father.

Five years later she was in Africa again with her young husband. The Duke and Duchess of Edinburgh, as they were known, were en route to Australia and New Zealand, standing in for the King whose health had twice forced him to cancel.

Their first port of call, however, was Kenya, where a series of official engagements was followed by a two-day safari to Treetops, the famous treehouse in the branches of a giant fig tree in the Aberdare National Park.

It was there, famously, that the future monarch ‘went up the tree a princess and came down a queen’. During the night, George VI had died in his sleep.

The circumstances of her succession have never been lost on the longest-reigning monarch in our history.

Former Commonwealth Secretary-General, Sir Sonny Ramphal, places enormous significance on the fact this moment occurred in the heart of Africa. 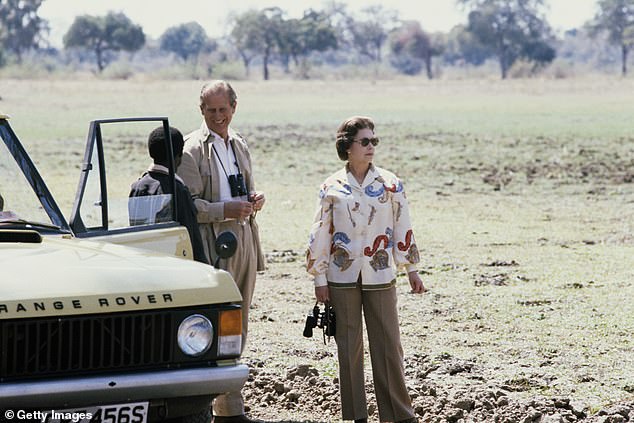 Queen Elizabeth and Prince Philip on safari during their state visit to Zambia, 1979 No sooner had Mrs Thatcher come to power in 1979 than she tried to prevent the Queen attending the upcoming Commonwealth summit in Zambia 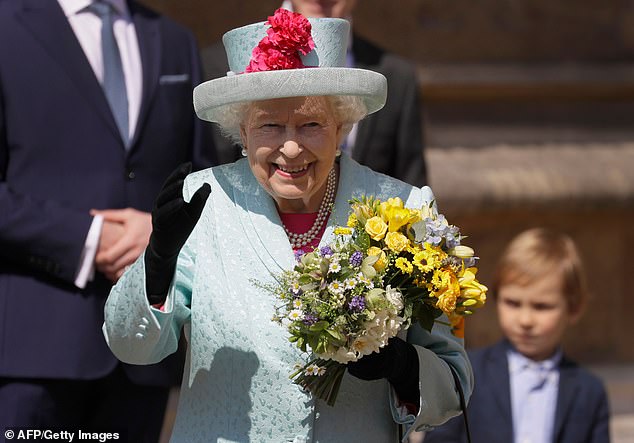 ‘It made a big impact on the other leaders,’ Sir Sonny explains in my book, Queen Of The World. ‘It made it so much easier for her to be a player in their midst. She really became a player at Treetops. She was a child of the Commonwealth too.’

Throughout her reign, the Queen has enjoyed some of her most memorable – and precarious – moments in Africa. Tensions between the Palace and the government of Margaret Thatcher usually had their roots in Africa.

No sooner had Mrs Thatcher come to power in 1979 than she tried to prevent the Queen attending the upcoming Commonwealth summit in Zambia, fearing an ugly bust-up over white-rule in Rhodesia.

The trip was also fraught with danger. Two civilian airliners had just been shot down by guerrilla militias and there were grave doubts about the safety of the Queen’s flight.

Regardless, the Queen released a calculated Palace statement saying how much she was looking forward to her trip, and forced Mrs Thatcher’s hand.

In the event, her personal interventions at the summit ensured a rare outbreak of diplomatic harmony and the start of a peace process which would result in the creation of modern Zimbabwe.

That, in turn, paved the way for the Commonwealth’s key role in dismantling South African apartheid. 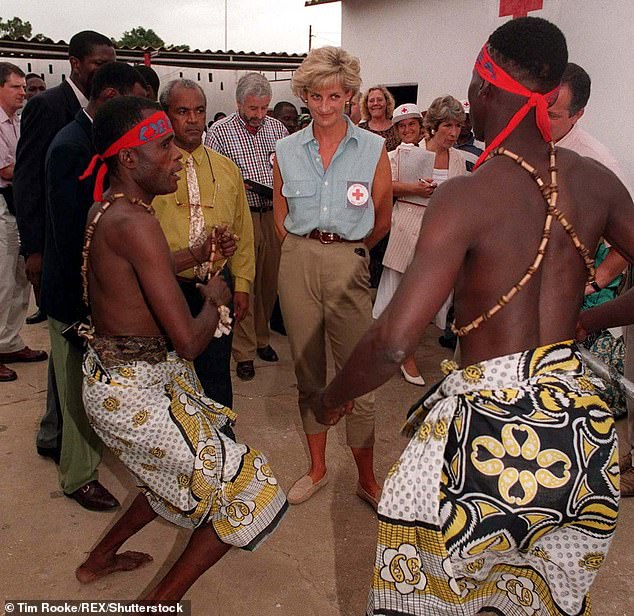 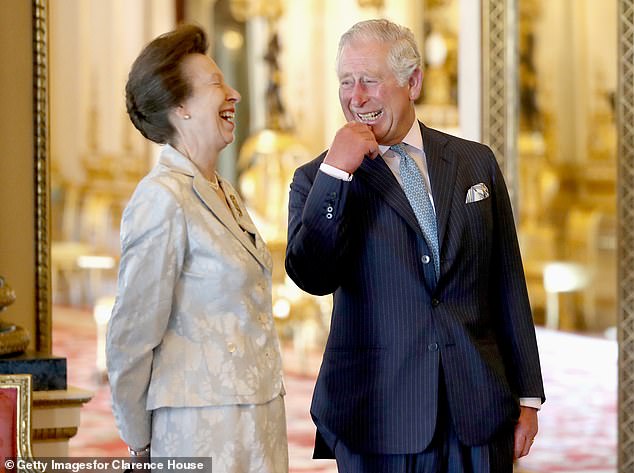 Africa would provide similar milestones for so many members of the family. Unaccompanied by their parents, Prince Charles and Princess Anne made a joint coming-of-age tour there in 1971

In nearly three decades of covering royal stories, I have witnessed few occasions to match the grandeur and poignancy of that moment in 1995 when the Queen returned to South Africa for the first time since 1947.

There, on the Cape Town quayside, was an equally excited President Nelson Mandela.

The two went on to become the firmest of friends. No other non-royal world leader would insist on (and get away with) calling her Elizabeth.

Long-serving Palace aides have always observed there was a different aura around the Queen when she was in Africa.

Never one for hyperbole, the Queen would reflect that her state visit with Mandela had been ‘one of the outstanding experiences of my life’.

Africa would provide similar milestones for so many members of the family. Unaccompanied by their parents, Prince Charles and Princess Anne made a joint coming-of-age tour there in 1971. 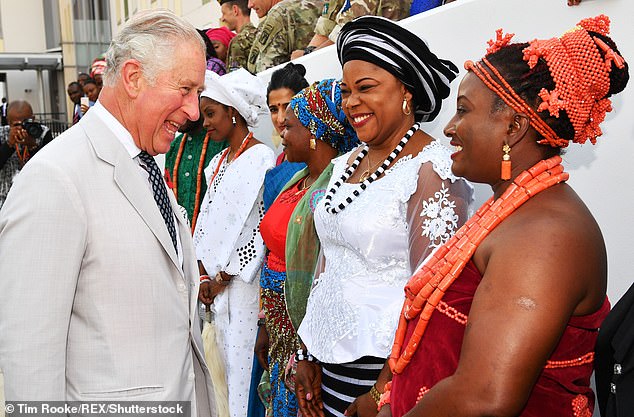 For the prince, it was his first experience of sleeping rough in the bush, of growing a beard, of being charged by an elephant and of holding an investiture.

For the Princess, it was her first overseas tour with charities which would go on to become part of her life.

Both the Duke of Cambridge and the Duke of Sussex would spend gleefully happy gap years in Africa. Both would woo their future wives there.

Just as Prince William forged one of his first royal patronages with the African wildlife charity Tusk, so Prince Harry’s first charitable venture was Sentebale, for orphans in Lesotho.

Even so, the latest talk of a ‘bespoke’ African role for the Sussexes remains firmly speculative. It is certainly going to require a great deal of careful diplomacy if the plan is to progress beyond the drawing board.

Headlines such as ‘Palace’s Africa plan for Harry and Meghan’ inevitably raise the question: has anyone asked Africa what Africa thinks? Indeed, has anyone asked the Commonwealth as a whole? 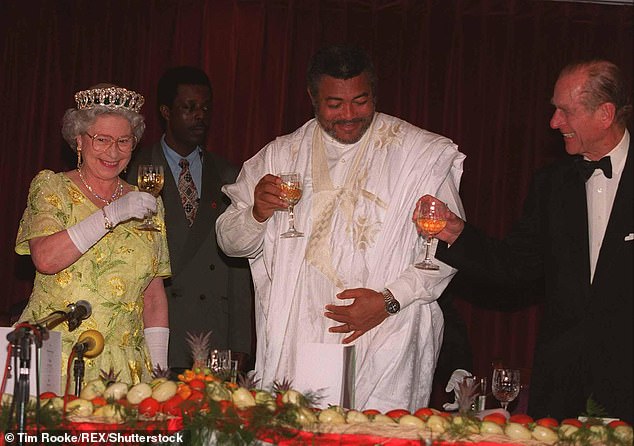 The Queen and Prince Philip at the state banquet on a visit to Accra, Ghana

For all its good intentions, this year’s Comic Relief campaign was side-tracked by an awkward debate about ‘white saviourism’ following promotional shots of (white) BBC presenter Stacey Dooley hugging a (black) child in Uganda. Labour MP David Lammy warned of a throwback to the ‘colonial era’.

So why go now? Have the Sussexes already had enough of married life in Britain? The news that the couple have set up their new home at Frogmore Cottage, Windsor, and are moving their private office to Buckingham Palace, has driven rumours of tensions with the Cambridges.

Old Palace hands say that it is simply a case of reaching what one has called ‘a fork in the road’, one which has also involved a great deal of input and careful planning by the Prince of Wales.

The Duke and Duchess of Cambridge are now embarking in earnest on their roles as future King and Queen.

The Duke and Duchess of Sussex understand and embrace the nature of the different, supporting role which lies ahead. 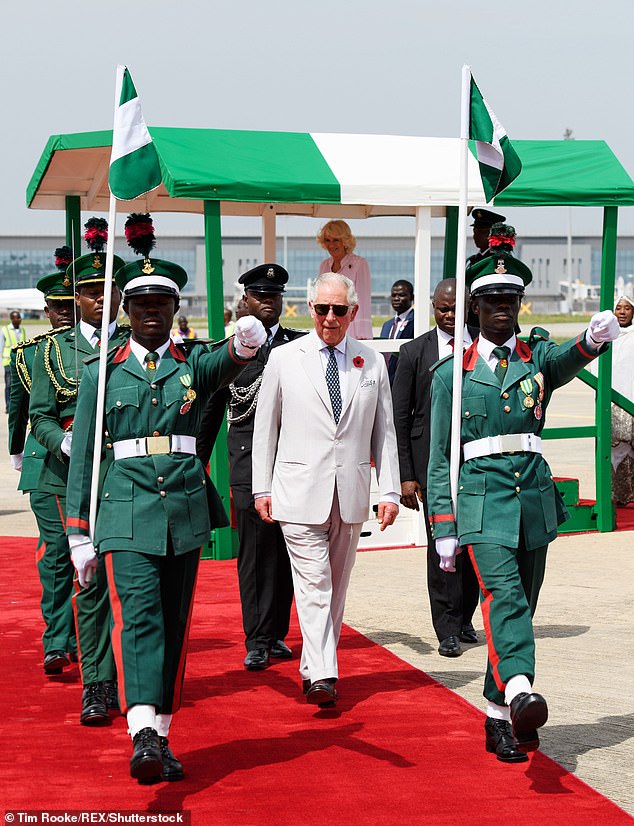 Prince Charles is flanked by armed guards as he arrives at the airport in Abuja Prince, Nigeria last year 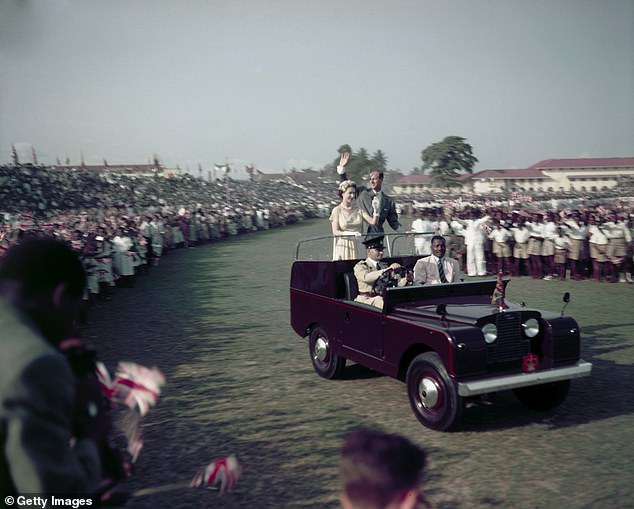 Queen Elizabeth II and Prince Philip waving from a Land Rover at a youth rally on the racecourse at Lagos, Nigeria in 1956

Come the next reign, the Sussexes will cease to come under the aegis of the new Prince of Wales and will, therefore, cease to be funded by the Duchy of Cornwall. They will automatically come under the auspices of the King.

As such, say aides, it is common sense to plan ahead and establish any new office where it is going to have to be located in due course.

The move to Buckingham Palace, therefore, originates from the Prince of Wales, not from any rift. And he, more than anyone, knows how ambitious overseas plans can come a cropper.

For Prince Harry might well have spent his own childhood on the other side of the world but for a political glitch.

During the 1980s, the Labour prime minister of Australia, Bob Hawke, suggested that the Prince of Wales should serve as Governor-General and bring his young family to Canberra.

The prince replied that he could only consider the invitation if all of Australia’s political parties agreed. Eventually, Hawke came back ruefully with the news. He had been able to persuade every party except his own.