So, a European campaign that began for Manchester United in the Champions League group stage in Paris last October will end in the Europa League final in Gdansk on May 26.

It shouldn’t have been in any doubt from the moment United seized a four-goal advantage at Old Trafford last week to take to the Stadio Olimpico.

But having gone even further ahead through Edinson Cavani last night, they threatened to fall apart in a wild second half that produced four more goals and needed some wonderful goalkeeping from David de Gea to stave off an unlikely comeback.

Cavani’s second goal of the night – and his seventh in six games – courtesy of the mercurial Bruno Fernandes could not prevent a defeat but it at least saw United finally win a semi-final under Ole Gunnar Solskjaer at the fifth attempt.

Solskjaer must now hope that United’s last trophy – the Europa League final win over Ajax under Jose Mourinho in 2017 – will also be their next. 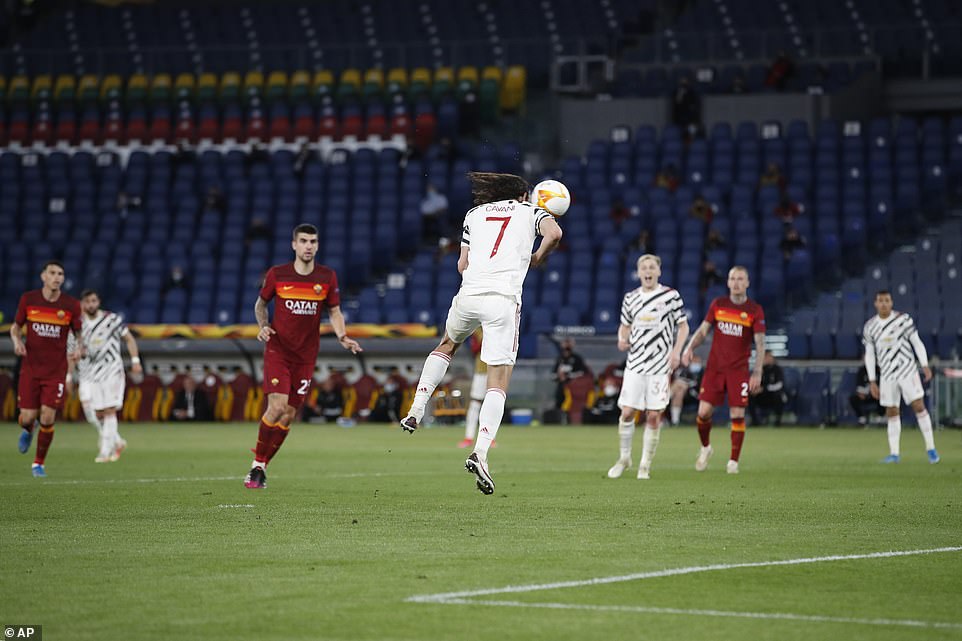 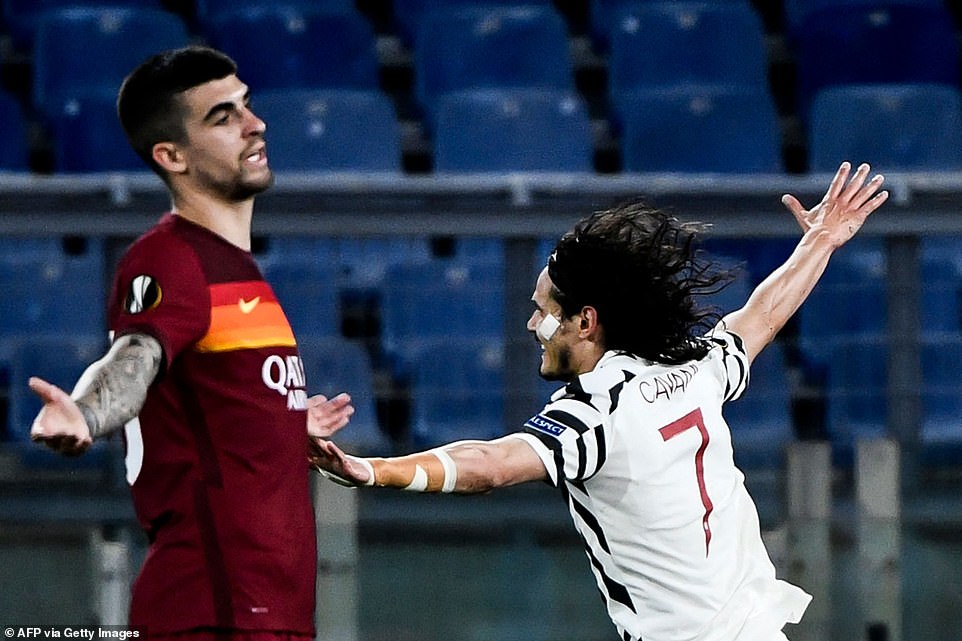 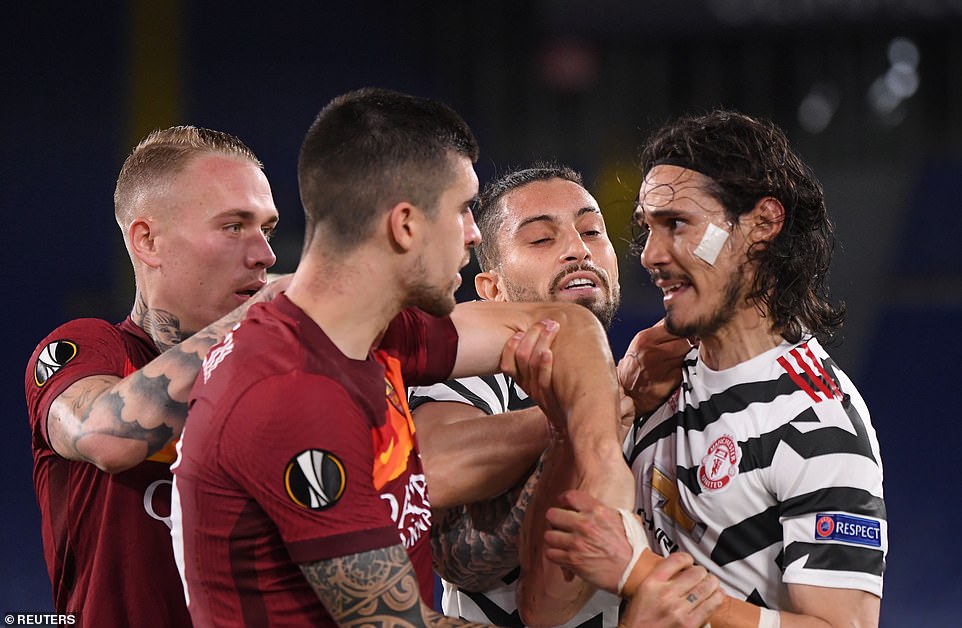 Progress has been the watchword for the last two-and-a-half years, but the manager knows he needs trophies to validate his work. A man whose last piece of silverware was the Norwegian Cup at Molde in 2013 is now one game away from his first at United.

It was just as well that they had such a commanding lead from the first leg because the postponement of Sunday’s game against Liverpool at Old Trafford amid violent protests meant this game was the first of four in eight days.

Solskjaer still went for a strong, attacking side. He kept eight of last week’s starting line-up which included giving Mason Greenwood his 100th appearance for the club at the age of 19 and Donny van de Beek an opportunity, even though the left side of midfield didn’t particularly suit him.

‘It’s going to be a relentless next week,’ said Solskjaer before kick-off, with Aston Villa next up on Sunday followed by the two rearranged games against Leicester and Liverpool. 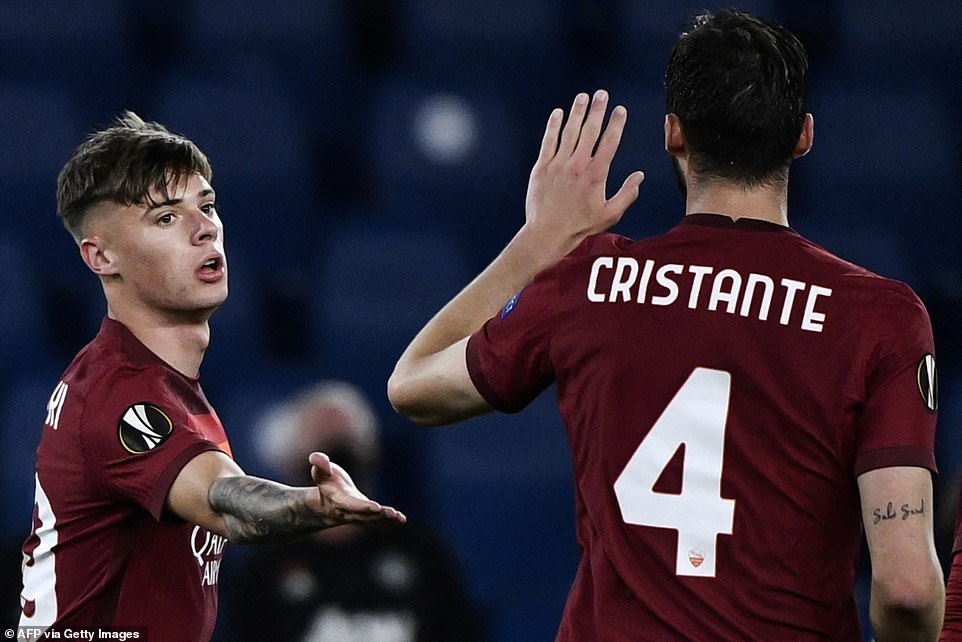 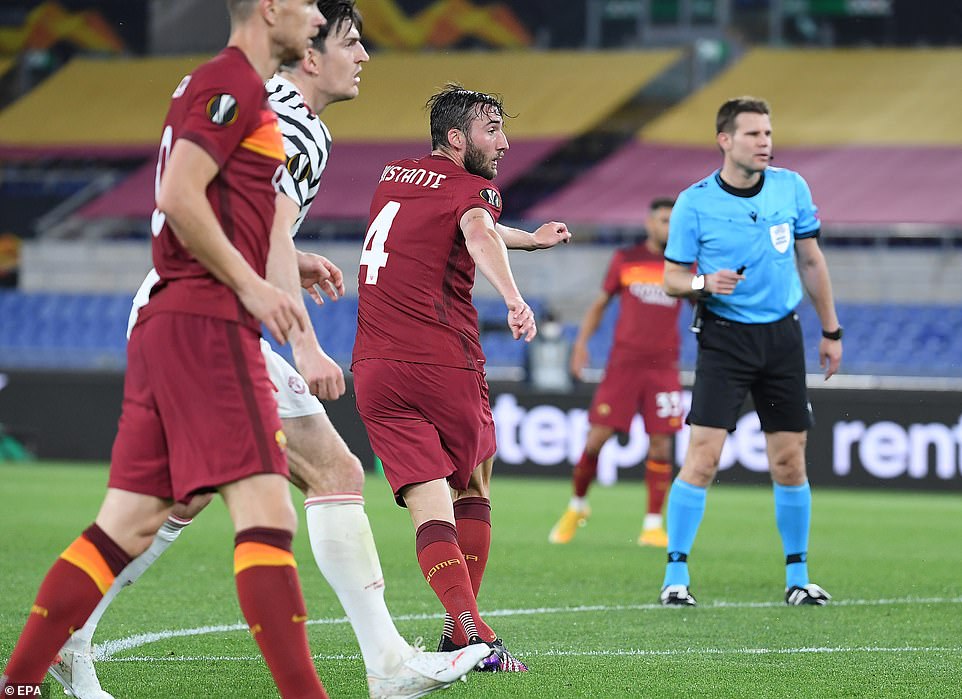 ‘But you don’t play well here and now thinking about the next one. We’ve got too many games to take our foot off the pedal.

‘We know we’re in a good position after two halves, but there are still two more halves to play.’

True, but even the most optimistic Roma fans weren’t expecting to turn this one around.

Their team famously came back from a three-goal deficit against Barcelona in 2018, but eternal hope had run short in the Eternal City after that second-half spanking in Manchester.

Talk in the Italian capital this week has focussed on Jose Mourinho’s imminent arrival to replace Paulo Fonseca rather than any Europa League miracle.

With nothing to lose, Fonseca’s team were free to give it a shot last night and started very brightly.

David de Gea made an excellent reflex save to thwart Gianluca Mancini at close range inside four minutes.

It was the first of four vital interventions in the first half from De Gea who cut out a cross destined for Edin Dzeko in front of goal shortly afterwards after Rick Karsdorp robbed a dithering Luke Shaw. 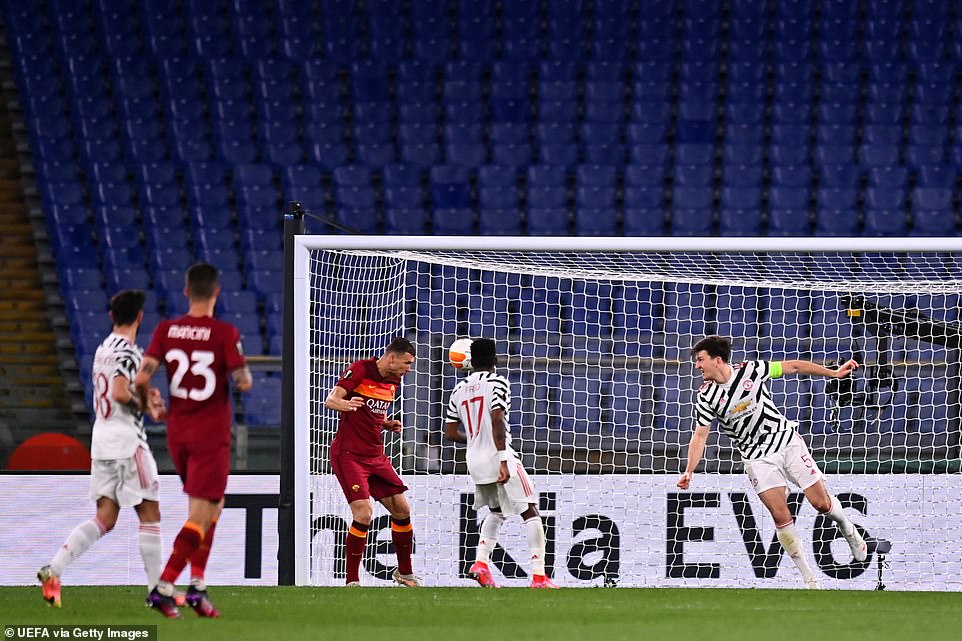 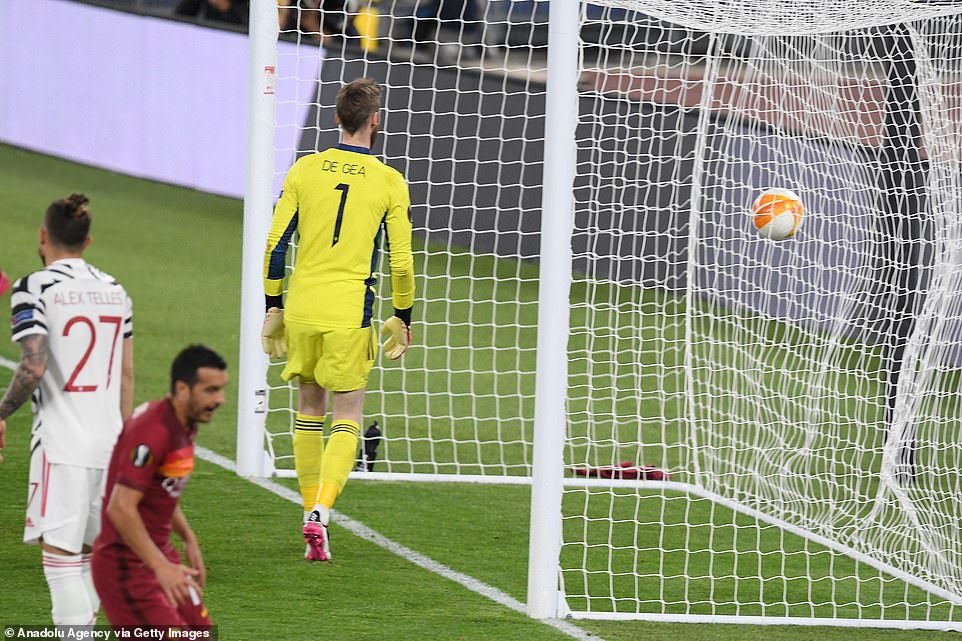 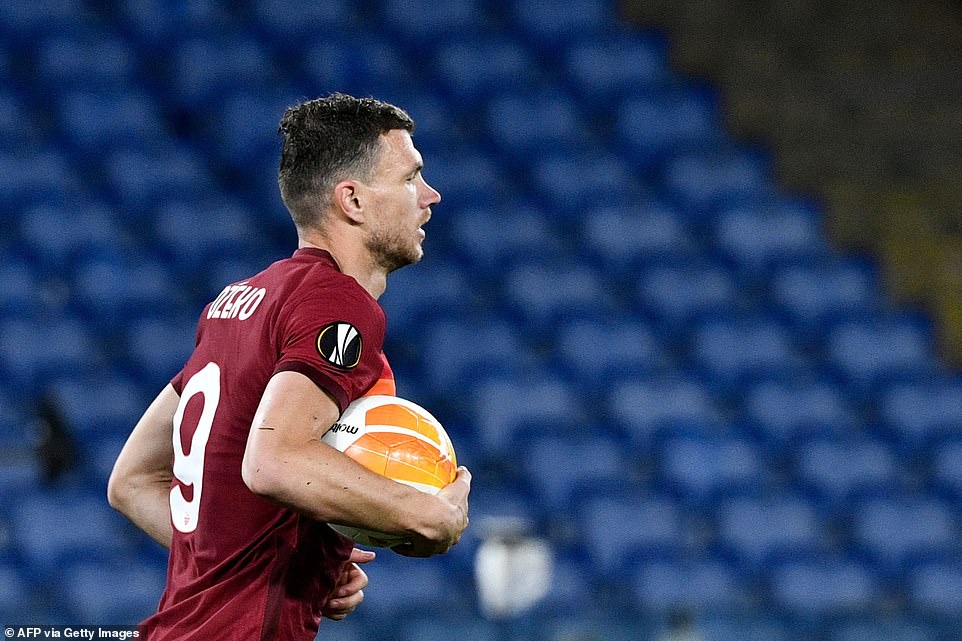 The Spaniard may have lost his No.1 spot to Dean Henderson but he reminded us of his ability with two more smart saves from the lively Lorenzo Pellegrini and former United man Henrikh Mkhitaryan before half-time.

United made inroads at the other end, however, and when Cavani scored in the 39th minute he could easily have been celebrating a hat-trick.

The Uruguayan was sent through by Fred’s pass over the top in the 20th minute but clipped the bar with a lob that ended up on the roof of the net.

When Bruno Fernandes played him through again with an exquisite pass off the outside of his foot six minutes later, Cavani went for power and saw his shot beaten away by Antonio Mirante.

It didn’t seem to alter his thinking when he got a third opportunity.

Fernandes was again at the heart of move, flicking Shaw’s pass brilliantly into the path of Fred. The Brazilian guided it through for Cavani who once again chose power over placement, and this time Mirante couldn’t keep it out.

Solskjaer felt comfortable enough to replace both his full-backs at half-time but it encouraged Roma to go for broke. It paid off with two goals, and it could have been even worse.

Dzeko headed in from close-range in the 57th minute after Mkhitaryan got down the left and crossed for Pedro whose volley into the turf bounced up nicely for the former Manchester City striker. 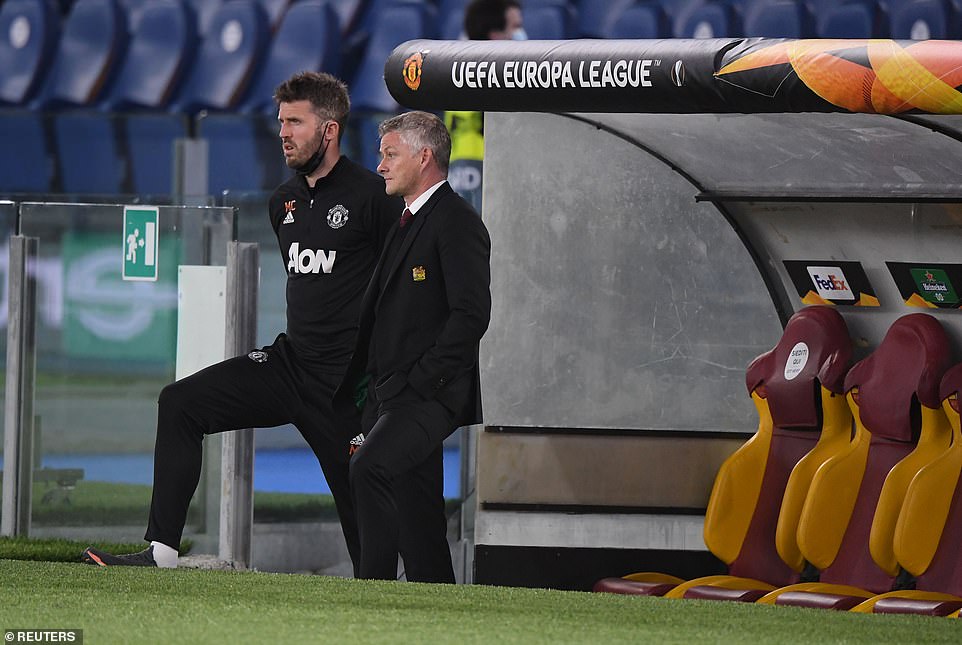 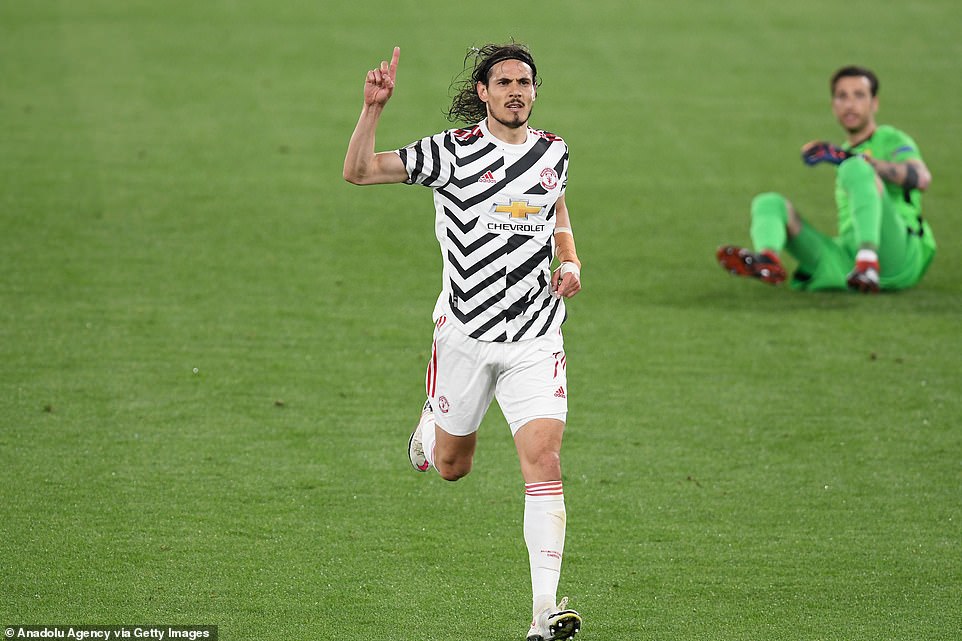 Another goal followed three minutes later after Pellegrini picked Fred’s pocket as he tried to be too clever on the edge of his own box and Bryan Cristante beat De Gea with an excellent shot.

The United keeper pulled off a double save from Dzeko and Pedro but knew little about another from Mkhitaryan as United threatened to wobble dramatically.

But Cavani settled any nerves with a second goal which again had Fernandes’ fingerprints all over it. The Portuguese spotted is teammate’s run into the box and picked him out with a superb cross that invited the emphatic headed finish.

Young substitute Nicola Zalewski scored from close-range to give Roma victory on the night but it’s United going to Gdansk.

Relive all the action from the Italian capital with Sportsmail’s DANNY GALLAGHER, who provided live Europa League coverage of Roma vs Manchester United in the Stadio Olimpico.