A Royal Navy nuclear submarine came within 30 seconds of colliding with a car ferry packed with hundreds of passengers.

The ship, carrying 282 people, was sailing between Belfast and Cainryan in south-west Scotland, when the terrifying incident unfolded in the North Channel on November 6, 2018.

A report into the near-miss – published today – said there was a ‘genuine’ and ‘serious risk of collision’ and that the passengers and crew of both vessels were in ‘immediate danger’.

A handout photo issued by the Marine Accidents Investigations Branch of the Stena Superfast VII ferry. The Royal Navy submarine and the ferry were at ‘serious risk of collision’ after safety decisions on the Navy vessel were taken based on inaccurate information, an investigation has found

It is the most serious near-miss in recent history, according to the Marine Accident Investigation Branch.

Its inquiry found that the speed of the ferry – 21 knots – and its distance away were disastrously misjudged by the crew of the nuclear-powered submarine, which was travelling at six knots.

The name of the submarine, based at Faslane in Scotland, has not been disclosed for security reasons.

The Navy said there were no nuclear safety issues during the incident.

The MAIB report said: ‘The latest event, though ultimately a near miss, had the potential to be the most serious of all, and it was avoided only by the actions of the bridge team of the ferry involved.

‘In all three cases, not only did the submarines’ command teams have an inaccurate appreciation of the position, course and speed of the surface vessels in their vicinity, but they also did not detect that their assessments were in error in sufficient time to take action to remain safe.’

In April 2015, a fishing trawler was towed at high speed through the Irish Sea after a submarine snagged its nets.

An investigation found the crew of the Karen were endangered as the ship was almost capsized.

At the time, the Navy said it had put in 12 new recommendations to avoid similar incidents. 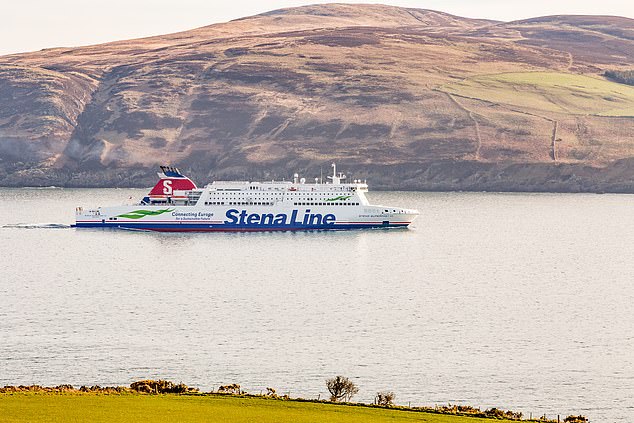 Its inquiry found that the speed of the ferry – 21 knots – and its distance away were disastrously misjudged by the crew of the nuclear-powered submarine, which was travelling at six knots

The MAIB has ordered the Navy to carry out an independent review of the latest incident.

One of the recommendations is for submarines to use radar in busy shipping lanes.

Andrew Moll, chief inspector of Marine Accidents, said: ‘Although there was no collision, this was the third accident or incident between a dived Royal Navy submarine and a surface vessel in 4 years, which is a matter of significant concern.

‘The Royal Navy co-operated with the MAIB’s investigation into this near miss and has taken a series of actions, intended to prevent recurrence, in response to this and the other similar incidents.

‘However, I have today recommended that the Royal Navy undertakes an independent review of the actions that have been taken, in order to ensure that the risk of similar collisions has been reduced to as low as possible.’

A Royal Navy spokesman said: ‘Ensuring safety at sea is a top priority for the Royal Navy, which is why we welcome this report and have already taken action to tighten our training and procedures.’