Rudy Giuliani: I WON’T cooperate with House Intelligence as long as Adam Schiff is in charge

Rudy Giuliani ranted Sunday morning that he would not cooperate with the House Intelligence Committee’s investigation as long as Adam Schiff is chairman.

The president’s personal attorney suggested that he would be more than happy to testify and cooperate with the House committee probing Trump’s relations with Ukrainian President Volodymyr Zelesnky, as long as someone who doesn’t want to ‘hang the president’ was put in charge of the committee.

‘I wouldn’t cooperate with Adam Schiff,’ Giuliani asserted on ABC’s This Week on Sunday morning. ‘I think Adam Schiff should be removed.’

Giuliani said he would cooperate ‘if they remove Adam Schiff, if they put a neutral person in who hasn’t pre-judged the case. If they put someone in – a Democrat who hasn’t expressed any opinion yet.’

‘If I had a judge in a case, and he had already announced, ‘I’m going to impeach,’ if he already went ahead and did a whole false episode, wouldn’t I move to recuse that judge?’ Giuliani argued. 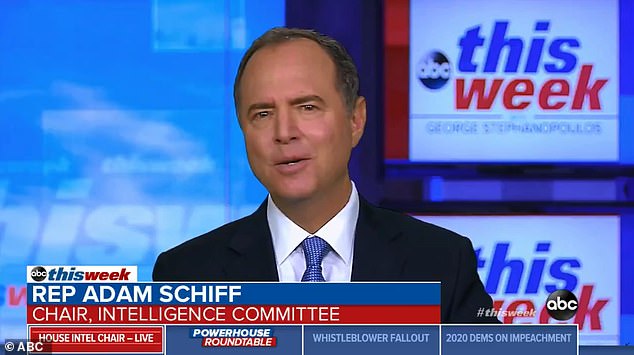 But Schiff, who also spoke with ABC Sunday morning, said the committee hadn’t yet decided if it were calling Giuliani to testify.  ‘We want to flesh out the facts, then we’ll make a determination whether it would be productive to bring in a witness like Rudy Giuliani,’ Schiff said

He said he would consider cooperating even if the California Democratic representative, who he labeled an ‘illegitimate chairman,’ were heading the committee’s investigation, claiming he was at the will of his client.

‘I will consider it [cooperating],’ Giuliani conceded, but added he would only do so if his client – the president – decides he wants him to testify.

‘I have to be guided by my client, frankly. I’m a lawyer, it’s his privilege, not mine,’ he said. ‘If he decides that he wants me to testify, of course I’ll testify, even though I think Adam Schiff is an illegitimate chairman because he has already prejudged the case.’

The former New York mayor said if the probe were actually ‘fair’ it would be charged by someone who hasn’t already issued a judgement.

‘If we want fairness here, we’ve got to put someone in charge of that committee who has an open mind. Not someone who wants to hang the president, who said I have evidence of Russian collusion. Adam, where’s the evidence?’ he traded against the committee chairman.

Schiff spoke with ABC’s George Stephanopoulos directly after Giulani, and denied prejudging the case, adding he wasn’t even sure if the attorney would be called to testify.

‘We want to flesh out the facts, then we’ll make a determination whether it would be productive to bring in a witness like Rudy Giuliani,’ he said.

‘Well he seems to think that I’m the judge and jury here,’ Schiff said of Giuliani’s assumptions. ‘My role is to do the investigation, my role is to make sure that the facts come out. If it were to lead to an impeachment – and I don’t want to get too far ahead of ourselves – it will be the Senate that makes the determination whether the president’s conduct should result in his removal from office.’

‘I intend to hold the president accountable, I intend to do a thorough investigation, and what we have seen already is damming,’ he continued. ‘Because what we have seen in that call record is a President of the United States using the full weight of his office with the country beholden to America for its defense… to try to commerce that leader to manufacture dirt on his opponent, and interfere in our election. It’s hard to imagine a series of facts more damning than that. So yes, we’re going to get to the bottom of that.’

The president has railed against Schiff, who has been hesitant to call for impeachment, after the Intelligence chairman earlier this week flip-the-switch.

The switch came as allegations from a whistle-blower emerged that in a July 25 call the president pressured Ukrainian President Volodymyr Zelesnky to investigate Joe Biden and his son Hunter Biden regarding potential corruption.

Trump released on Wednesday an unredacted transcript of the phone call, which he said would prove there was no foul play. But the transcript showed that the president did urge an investigation.

During a hearing with Acting Director of National Intelligence Joseph Maguire this week, Schiff put words in the president’s mouth in what he said was intended to be a ‘parody’ of the transcript.

‘I have a favor I want from you,’ Schiff read aloud Thursday without disclosing that he was about to read from a parody of the call. ‘And I’m going to say this only seven times, so you better listen good. I want you to make up dirt on my political opponent, understand? Lots of it, on this and on that.’

‘HE WAS DESPERATE AND HE GOT CAUGHT,’ Trump wrote. ‘Adam Schiff therefore lied to Congress and attempted to defraud the American Public. He has been doing this for two years. I am calling for him to immediately resign from Congress based on this fraud!’

Officials say that Giuliani got involved in U.S.-Ukraine relations after the conclusion of Robert Mueller’s Russia investigation, and the attorney insists he only did so after the State Department asked him to intervene.

Part of his initiative to shake up the relationship included pushing out then-Ambassador to Ukraine Marie Yovanovitch, who was called back to Washington a few months ahead of the end of her three-year assignment there.

The decision angered advisors and aides, including then-National Security Advisor John Bolton, who were confused by Giuliani’s role in the foreign policy initiative.

In the transcript of the call, Trump offered Giuliani’s services to investigate the Biden’s.

Hunter Biden accepted a board position with Ukrainian natural gas firm Burisma Holdings in 2014, when his father was still serving as Obama’s vice president. He reportedly earned $50,000 per month from the post, which he stepped-down from last year.

His position raised eyebrows in Washington, many claiming there was a conflict of interest. But the Obama administration at the time claimed there was nothing improper about the move since Hunter is a private citizen.

Joe Biden also claimed he never discussed his son’s position with the Ukraine company – something that was disproven by Hunter’s own interview earlier this summer when he recounted a 2015 conversation he had with his father about his post at Burisma.