The self-proclaimed call girl ‘mistress’ of a Russian billionaire has claimed in an Instagram video that she will reveal Russian connections to the 2016 US presidential elections if America rescues her from Thailand.

Nastya Rybka, who reportedly filmed billionaire Oleg Deripaska and Deputy Prime Minister Sergei Prikhodko on Deripaska’s private yacht in 2016, took to Instagram on Tuesday begging the US for help after she and nine others were arrested in Thailand on Sunday.

‘If we go back to Russia we will die in Russian’s prison or they will kill us,’ she wrote Tuesday on her Instagram account. ‘Please USA help us not to die from Russians!’

Rybka, whose real name is Anastasiya Vashukevich, said she is willing to offer members of the US media information that she claims to posses regarding the ties between Russian lawmakers, President Donald Trump and the US elections. 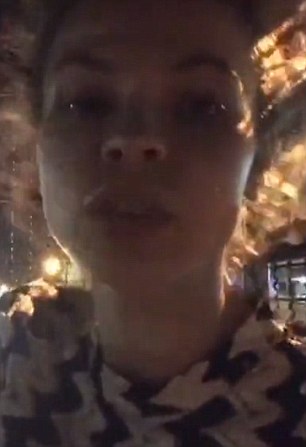 Nastya Rybka, the ‘mistress’ of a Russian billionaire has claimed in a video that she will reveal Russian connections to the 2016 US presidential elections if America rescues her from Thailand. Rybka was arrested in Thailand on Sunday 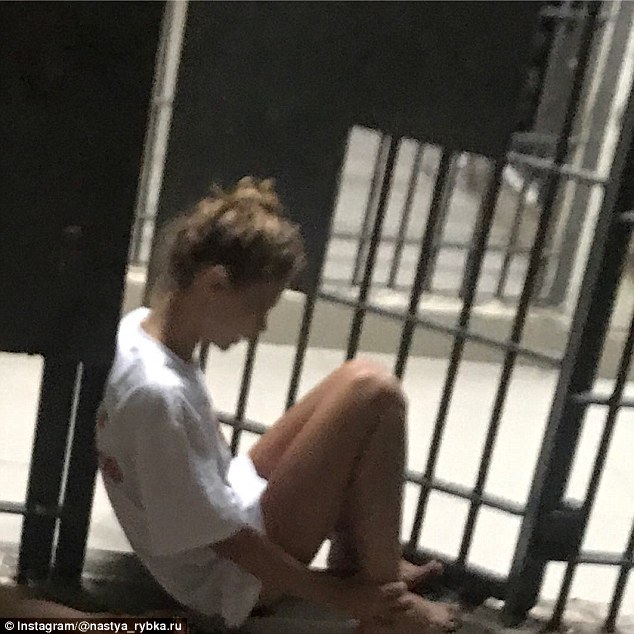 She claims she ‘knows a lot’ and has ‘audio and video’ proof.

In the video, Rybka said that she and her ‘associates’ were arrested on someone’s order that came from Bangkok.

Rybka claimed that someone was paid off to throw her in jail, in violation of Thai laws.

‘If you find me in Thai jail still alive, I would gladly talk to you. I am awaiting your proposals,’ she said in the video.

Thai police arrested Rybka and nine others who police said claimed to be sex experts running a course on lovemaking.

Just last week, the ‘sex guru’ Alex Lesley, 36, claimed to have played a part in the events which led to social media giants YouTube and Instagram being threatened with a nationwide ban in Russia.

His ‘student’ Rybka claimed she and other models were hired to spend time on the yacht off Norway two years ago. 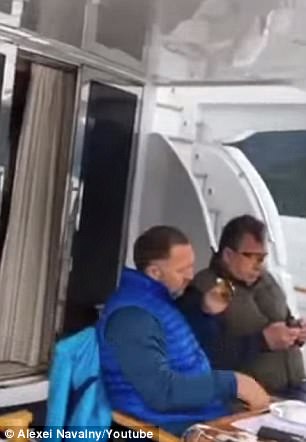 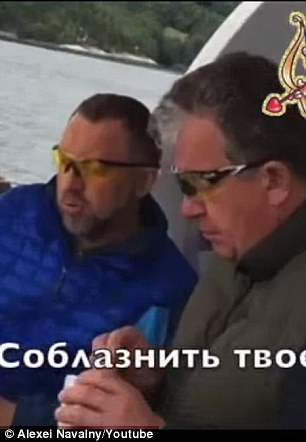 Nastya Rybka, who reportedly filmed billionaire Oleg Deripaska (in blue) and Deputy Prime Minister Sergei Prikhodko (in green) on Deripaska’s private yacht in 2016, took to Instagram on Tuesday begging the US for help after she and nine others were arrested in Thailand 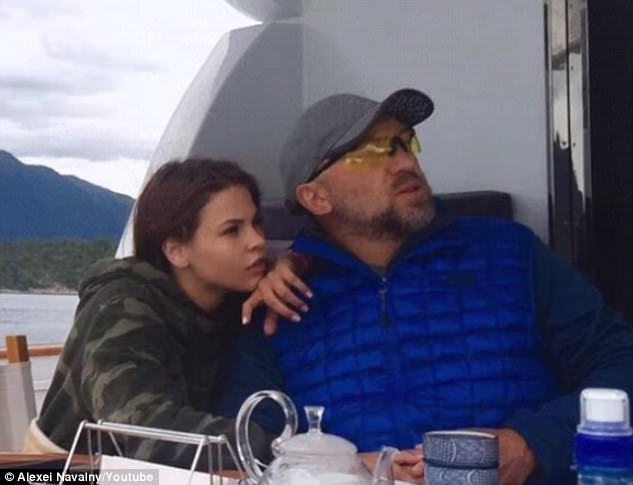 The videos and photos of Deripaska and Prikhodko on the yacht first emerged on the social media accounts of Anastasiya Vashukevich (pictured on the yacht with Deripaska), a woman working as an escort under the name Nastya Rybka 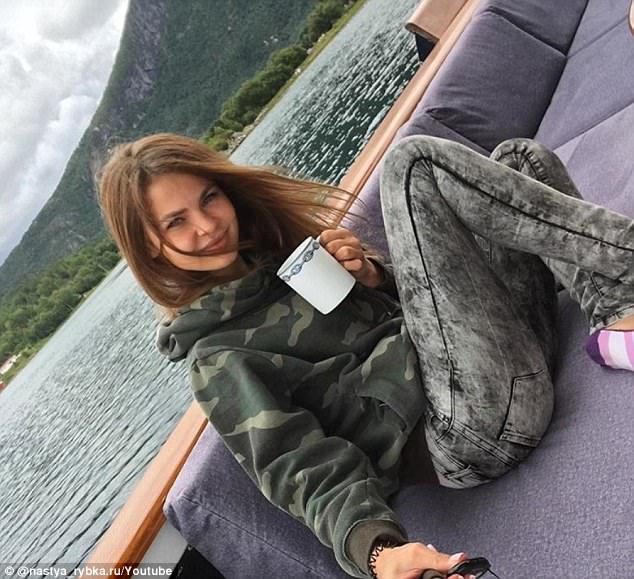 Thorn in Kremlin’s side: Navalny produced a report on February 8 accusing the pair of corruption after he tracked down the pictures on Rybka’s Instagram account

Lesley encourages his ‘students’ to film their conquests ‘so he can give them advice on where they are going right or wrong’, which Rybka did.

Lesley runs a ‘sex academy’ which offers the chance to turn his ‘students’ into a ‘new generation’ of man-hunters.

It’s unclear who was arrested alongside Rybka during their lovemaking class in Thailand.

Rybka is the author of tell-all book, Who wants to seduce a billionaire? 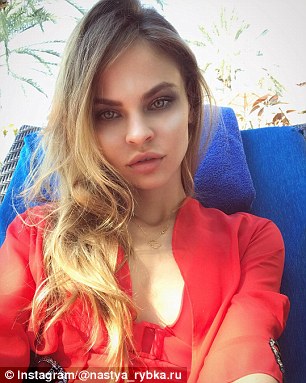 The 2016 meeting between Deripaska and Prikhodko that was reportedly recorded by Rybka, is believed to be evidence of corruption and bribery, according to the Russian opposition, led by Alexei Navalny.

In one video, the two men can be heard referring to ‘bad relations with America’ and ‘Nuland’, referring to Victoria Nuland, the then Assistant Secretary of State for European and Eurasian affairs in the Obama administration.

Rybka also claims to have had an affair with Deripaska and says she was hired to spend time on the oligarch’s yacht.

Rybka, originally from Belarus but now based in Dubai, posted several videos in August 2016 showing Deripaska on his yacht talking with Prikhodko.

The videos were only picked up by Navalny on February 8 as part of an investigation.

In one snippet, Deripaska explains to Rybka why relations between Russia and the US are so bad. 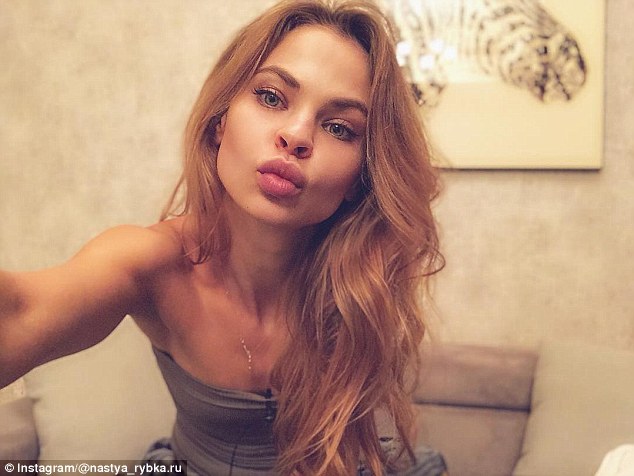 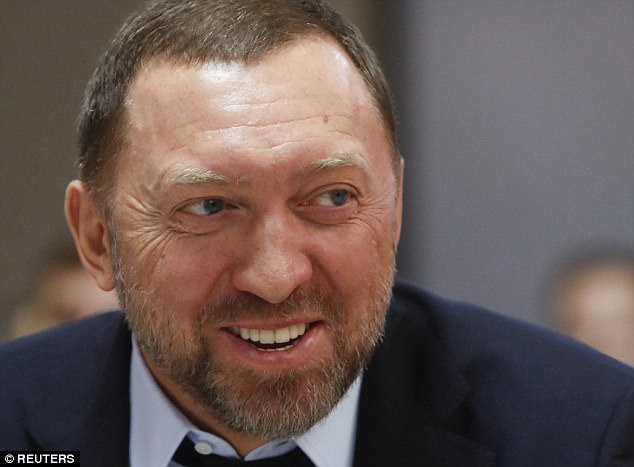 ‘We’ve got bad relations with America. Why? Because the friend of Sergey Eduardovich [Prikhodko], Nuland is her name, is responsible for them. When she was young, she spent a month on a Russian whaling boat, and after this, she hates the country.’

Two weeks ago, a Russian court ruled that the videos and images must be removed from social media platforms, Instagram and YouTube, because they invade Deripaska’s privacy.

Deripaska won the order from the Ust-Labinsk district court in his native Krasnodar region which demanded that 14 Instagram posts and seven YouTube videos that ‘breach his right to privacy’ must be removed, according to BloombergQuint.

Navalny claimed at the time that the videos allegedly showing Rybka, Deripaska and Prikhodo, were evidence of government corruption.

He quoted public records suggesting that Prikhodko spent several days on the yacht and was flown there by Deripaska’s private jet.

Navalny also speculated whether the meeting had anything to do with the Trump presidential campaign, specifically Deripaska’s reported links to former campaign chairman Manafort.

A spokesman for Deripaska rejected Navalny’s report, saying: ‘These scandalous and mendacious assumptions are driven by sensationalism and we totally refute these outrageous false allegations in the strongest possible way.’ 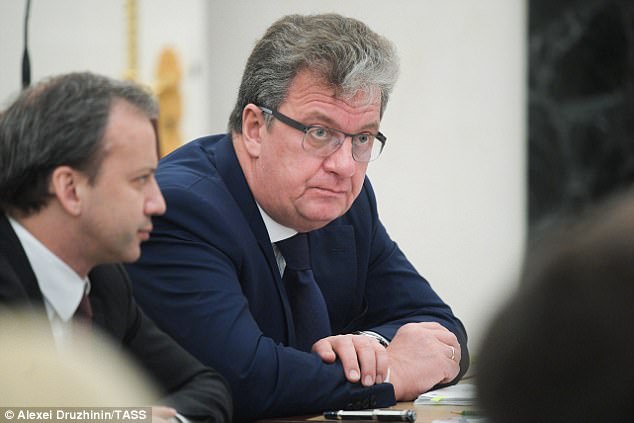 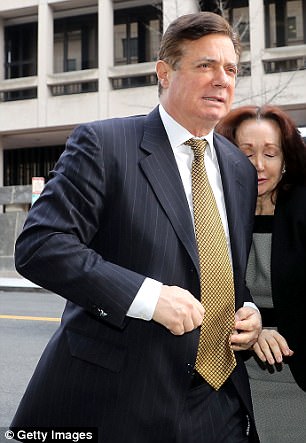 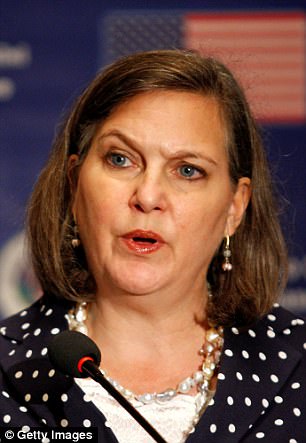 Navalny claims in a YouTube video that the meeting may have had something to do with Manafort’s (left) relationship with Deripaska. The Russian duo also discussed Victoria Nuland (right), who was the Ass Secretary of State for European & Eurasian Affairs

Deripaska is a controversial figure who has been linked to both Russian President Vladimir Putin and Manafort.

Manafort offered to provide briefings on the US Presidential race to Deripaska, according to a Washington Post report from September although there is no evidence such briefings ever took place.

In 2014, Deripaska accused Manafort of owing him nearly $19 million in a Cayman Islands court.

In 2008, he was at the cener of a British political scandal, when it emerged that then-Shadow Chancellor George Osborne, Lord Peter Mandelson and banking heir Nat Rothschild had all spent an evening on his yacht Queen K in Corfu in August.

Navalny, on the other hand, is banned from running in next month’s presidential election in Russia. He is known for probing the behavior of well-known Russian figures.