Ryan Lochte’s 911 call, made moments after he was involved in a car accident on Thursday, has been released.

Lochte, 34, was driving his Porsche in Gainesville, Florida on Thursday – hours after a drunken incident in his California hotel room – when he hit another car.

The Olympic swimmer called 911 and told the operator he ‘just rear-ended the people in front of me’.

‘We just got in an accident,’ Lochte can be heard telling the emergency dispatcher in the recording, which was obtained by TMZ.

Ryan Lochte’s 911 call, made moments after he was involved in a car accident on Thursday in Gainesville, Florida (pictured), has been released

‘Okay, where at?’ the operator asks.

After Lochte clarifies which street he’s on, he tells the operator a police officer has arrived.

‘You all blocking traffic?’ she asks.

The operator then asks if Lochte was involved in the crash.

‘Was anyone injured?’ she asks.

The driver of the vehicle Lochte struck was later taken to the hospital with non-life threatening injuries. 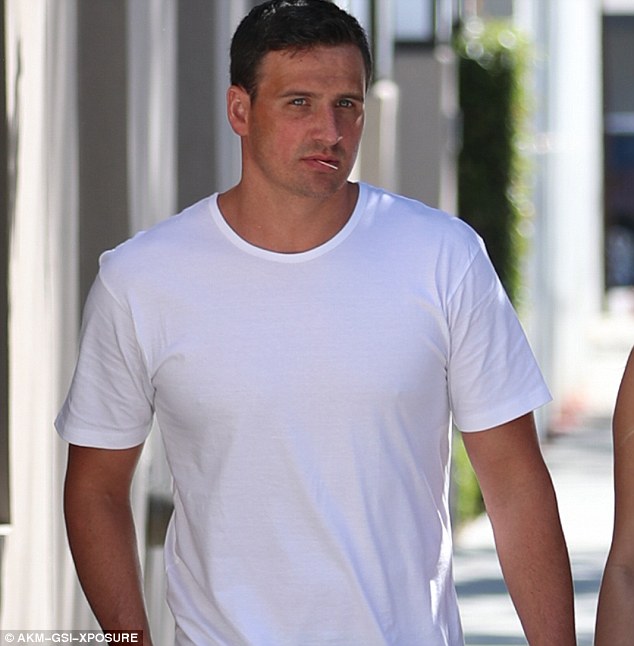 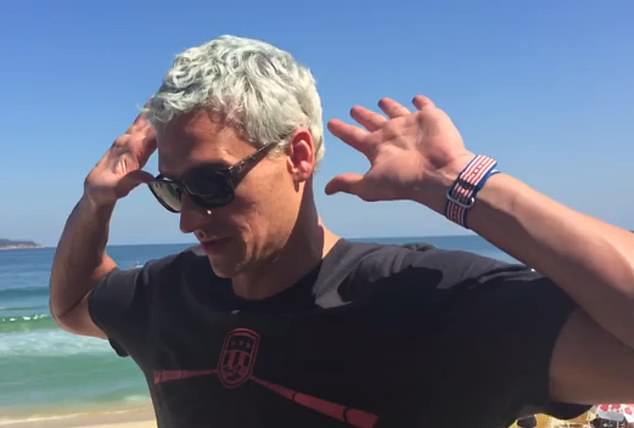 The Olympian, pictured discussing his fake robbery story in Brazil in 2016,  drunkenly tried to kick in his hotel room door in California at a California hotel Thursday

TMZ also obtained another 911 call from a witness at the scene, who said there was a ‘car completely dark in the middle of the road’.

‘A car, totally lights out, stalled in the middle of the road,’ the woman can be heard telling the dispatcher, although it remains unclear if she is referring to Lochte’s car.

‘Are they blocking the roadway?’ the dispatcher asks.

A  police report obtained by US Weekly reveals the driver in front of Lochte slammed on his brakes around 9.45pm.

Lochte ‘attempted to brake and veer right’, but ended up striking a car on the rear passenger side. He was cited for ‘careless driving’.

There was no mention of alcohol in the police report.

Lochte flew to Florida just hours after he was involved in a drunken tirade at a California hotel and tried to kick in his hotel room door on Thursday morning. 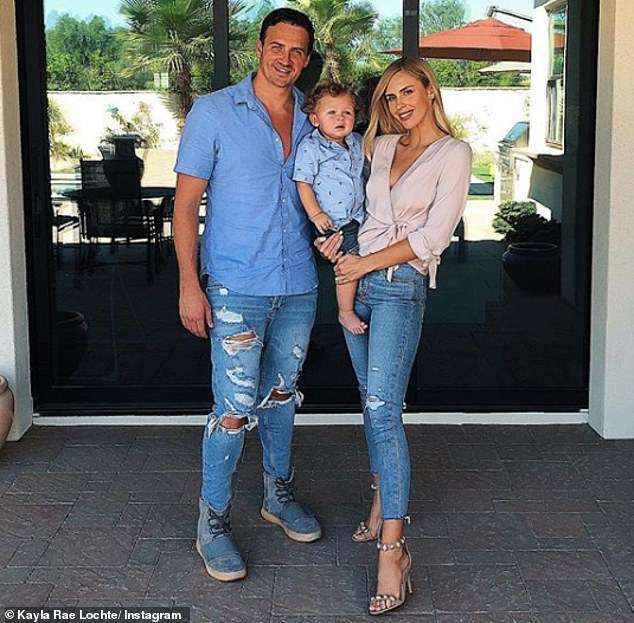 A police report obtained by US Weekly reveals the driver in front of Lochte (pictured with wife Kayla Reid and one-year-old son Caiden) slammed on his brakes around 9.45pm. Lochte ‘attempted to brake and veer right’, but ended up striking a car on the rear passenger side

Police were called to the scene in Newport Beach around 3am but no arrests were made and Lochte was able to ease the situation with the hotel.

The incident prompted the 12-time Olympic medalist to acknowledge that his drinking is a serious issue that requires professional help before getting worse.

‘Ryan has been battling from alcohol addiction for many years and unfortunately it has become a destructive pattern for him,’ Lochte’s lawyer, Jeff Ostrow told TMZ.

‘Ryan knows that conquering this disease now is a must for him to avoid making future poor decisions, to be the best husband and father he can be, and if he wants to achieve his goal to return to dominance in the pool in his fifth Olympics in Tokyo in 2020.’

But Ostrow insisted the fender bender had nothing to do with Ryan’s rehab decision. 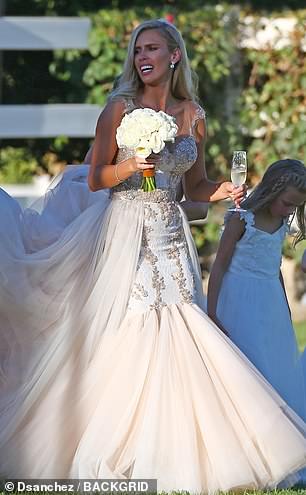 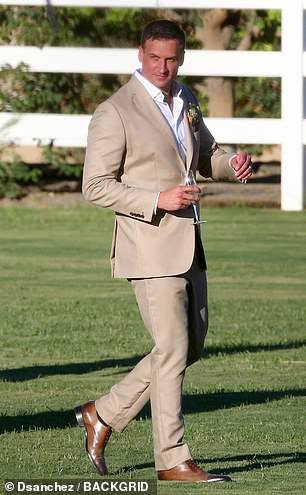 ‘It was the tiniest of accidents and had nothing to do with his decision to seek treatment,’ he told People.

‘It’s embarrassing that the outlets would even consider reporting on it.’

The incident comes just weeks after Lochte married Playboy model Kayla Rae Reid, with whom he has a one-year-old child named Caiden.

And this is not the first time Lochte has been involved in a drunken dispute.

In 2016, he was arrested in Brazil during the Rio De Janeiro Summer Olympics for vandalizing a gas station and then returning to the US and lying about it.

The incident became known as ‘Lochtegate’ after the swimmer admitted to ‘over-exaggerating the story’ that he and his teammates had been robbed at gunpoint at the gas station.

DailyMail.com debunked his claims after obtaining surveillance footage showing a drunken and jubilant Lochte urinating on the side of the gas station and vandalizing the property. 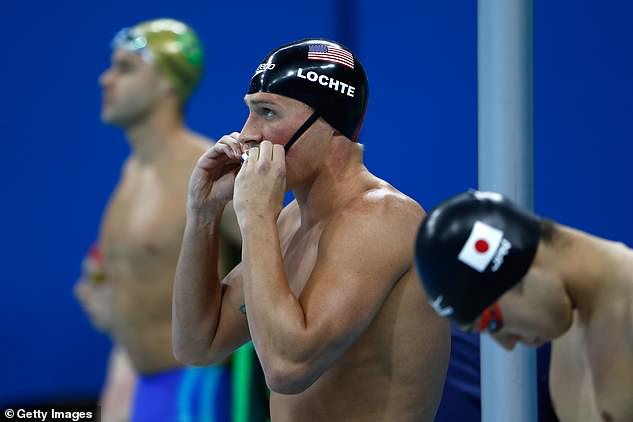 This is not the first time Lochte has been involved in a drunken dispute. In 2016, he was arrested in Brazil during the Rio De Janeiro Summer Olympics for vandalizing a gas station 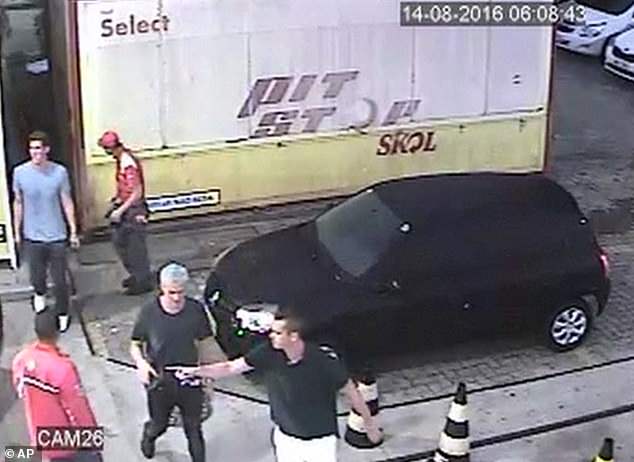 Lochte claimed he was robbed at gunpoint, but surveillance footage showed a drunken and jubilant Lochte urinating on the side of the gas station and vandalizing the property

He later said in an interview that he had been drunk and was suspended from domestic and international swimming competitions for 10 months, losing his sponsors in the process.

Last year Lochte was cleared of criminal charges in the Rio Olympics scandal. But Brazil’s Superior Court overturned that decision in June.

‘After Rio, I was probably the most hated person in the world. There were a couple of points where I was crying, thinking, “If I go to bed and never wake up, fine,'” Lochte told ESPN in 2017.

Asked if that meant he had considered suicide, Lochte nodded, saying: ‘I was about to hang up my entire life.’

Months following Rio he got engaged to Kayla Rae Reid and said the birth of their son in June 2017 changed things for him. 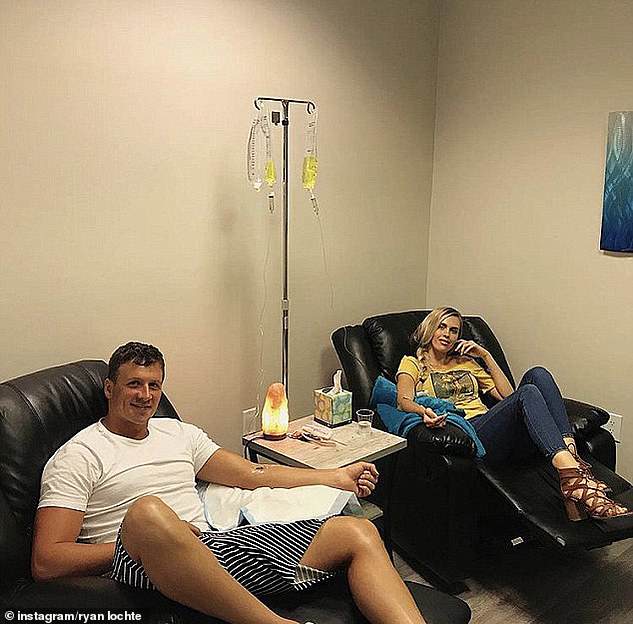 In May Lochte posted this photo receiving an IV treatment that violated the US Anti-Doping Agency rules, landing him a 14-month suspension that will end in July 2019

‘Honestly the reason why I came back is because of Caiden. There is more I wanted to accomplish in the sport of swimming, but my heart wasn’t there.’

‘We found out that we were having a child, and when Caiden was born, I was like, “That’s it. That’s what I needed.” And this spark is a spark I’ve never had in my entire life. I can’t explain it. I’m more driven now than I have ever been.’

Lochte returned to competition in August 2017 but trouble stirred again this summer when he broke the US Anti-Doping Agency rules by posting a photo of himself receiving an unapproved IV infusion on May 24.

He didn’t have a therapeutic use exemption and the infusion was larger than the 100ml allowed over a 12-hour period – landing the Olympian a 14-month suspension as punishment.

The suspension will end in July 2019 and could jeopardize Lochte’s hopes to land a spot on the 2020 Olympic team.

Lochte said he got the IV – which contained mostly B-complex vitamins – to avoid catching his wife and son’s illness.

‘A rule is a rule and I accept that there is a technical violation. I am hopeful that other athletes learn from my mistake,’ he told Associated Press.