Christian Ramsay was due to act as petty officer to the guard at the Royal Edinburgh Military Tattoo, but was too drunk to perform

A drunken sailor got so merry on free alcohol at a Royal Navy lunch he couldn’t carry out his duties at the prestigious Edinburgh Tattoo later that evening, a court martial heard today.

Christian Ramsay was due to act as petty officer to the guard at the Royal Edinburgh Military Tattoo, carrying out important ceremonial duties at the renowned event in front of VIP guests.

However, the 39-year-old instead spent the ceremony being looked after by a Royal Navy colleague after he got ‘seriously drunk’ at a military lunch hours before.

The meal included a number of senior guests from armed forces around the world. During, Officer Ramsay ‘over-consumed’ the free alcohol and became so drunk he ‘lost all self-control’ and ’embarrassed himself and his colleagues’.

A court martial heard today the sailor was ‘completely out of his head’ and bizarrely took it upon himself to ‘swan around’ the reception ‘offending people’.

PO Ramsay made distasteful jokes about ‘rape’ to a female colleague, made offensive remarks to a senior Indian military representative about his heritage, and told an offensive joke to US military personnel about ‘USA’s history’.

The court heard PO Ramsay still tried to insist he was in a good enough condition to carry out his duties at the Tattoo.

PO Ramsay, who is based in Faslane, Scotland, and has served with the Royal Navy for 18 years, was today fined £1,500 at Portsmouth Military Court, for his drunken antics on August 26, 2016.

He admitted two counts of unfitness through alcohol and Assistant Judge Advocate General Robert Hill said his behaviour ‘could not be more of a disgrace to the navy’.

Prosecutor Captain John Atwill said: ‘These allegations arise when he was working for the Royal Navy at the Royal Edinburgh Tattoo.

‘Put simply, he had very clearly over-consumed a very large amount of the free alcohol and his behaviour descended at the lunch reception to the point where a number of people had to intervene.

‘Junior ranks and officers all had to intervene, they were embarrassed by him and for him.

‘His behaviour while drunk is almost difficult to describe, he was seriously drunk and pretty much every element of his self-control was gone.

‘He did rounds of the reception trying to offend people. Perhaps the most troubling was when he approached a young woman.

‘He asked her if she wanted to be raped, she said ‘I do not’ and he said ‘that’s the spirit’ and walked off.

‘A colleague came over and apologised for him. A leading hand told him ‘you need to shut up’, he took him by the arm and took him outside.

‘He told PO Ramsay ‘you need to calm down’ and PO Ramsay then replied ‘f*** off mate, I’m a senior rate’.

‘He turned to the US military band and offered them an offensive joke about the USA’s history, which I will also not repeat. 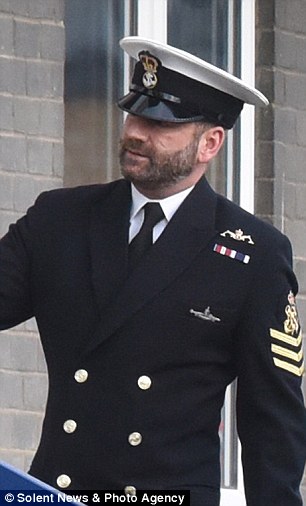 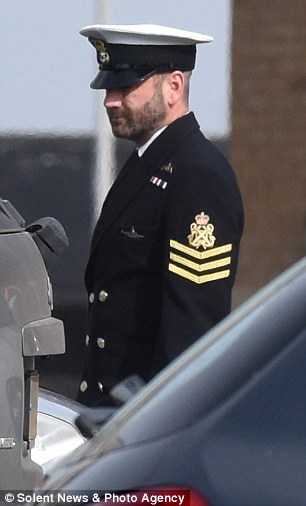 ‘His behaviour got worse and worse throughout the day. He was due to be the on duty petty officer of the guard for the Tattoo that evening, however he was so drunk he could not fulfill his duty.

‘So concerned were his colleagues that they had to place a sentry on him that day.’

Captain Atwill added: ‘Everyone could see that he was getting more and more drunk except from himself, he insisted that he was fine and could carry out his duty.’

The Royal Edinburgh Military Tattoo is a renowned annual event which features a number of musical performances from the British armed forces as well as Commonwealth and international military bands.

The tattoo, which takes place every August at the Scottish capital’s Edinburgh Castle, attracts around 220,000 visitors in the audience and a further 100 million across the globe who watch it on television.

And the prestigious event, which began in 1950 and has been billed as ‘the greatest show on Earth’, was given its royal status by the Queen in 2010 to celebrate six decades of existence.

Lieutenant Freddie Huntley, defending, said PO Ramsay is remorseful for his actions and has given up alcohol.

She said: ‘There is nobody half as embarrassed as himself. PO Ramsay deeply regrets the damage he has done to the Royal Navy.

Lieutenant Huntley also said PO Ramsay was in a ‘heightened state of emotion’ as his wife of 12 years had left him a month before the incident and also his young nephew had died violently shortly before.

She said the father-of-one accepts his behaviour, and added: ‘He still has not drunk, he said this is a life choice, a permanent resolve, as alcohol does not agree with him.’

In a letter to the court, PO Ramsay said: ‘I want to publicly and sincerely apologise.

‘I feel ashamed of myself and I am currently taking action to help myself and prevent this ever occurring again in any way.

‘I know my behaviour at the function was wholly unacceptable for that of a senior rate.

‘Again, I deeply regret my actions and I value the medical and emotional support to me throughout this time.’

Fining PO Ramsay, Judge Hill said: ‘The drunkenness and behaviour that followed frankly could not be more of a disgrace to the Royal Navy.

‘The Tattoo is a prestigious event and you were at the reception before swanning around completely out of your head.’

He added that he accepts PO Ramsay is remorseful and has rehabilitated himself.