A retired NRL star has taken aim at the Rabbitohs in an awkward joke at the prestigious Dally M Awards.

Former Brisbane Broncos star Sam Thaiday, who retired at the end of this season, was a special guest at the event on Wednesday night in Sydney and took to the stage to give an ‘Ode to the Retirees’.

The tongue-in-cheek piece dedicated to Johnathon Thurston, who also recently retired from the North Queensland Cowboys, poked fun at several clubs – including the Rabbitohs.

Thaiday spoke about ‘gifts’ clubs had given to Thurston for his retirement, including a ball in a glass case and ‘a boat’ from the Melbourne Storm – a shot at the Storm salary cap scandal in 2010.

But it was his comment about the recent sexting scandal that has plagued the Rabbitohs that got heads turning.

‘And the Rabbitohs sent him a really really nice video message,’ Thaiday said.

‘So thank you Rabbitohs,’ he joked. 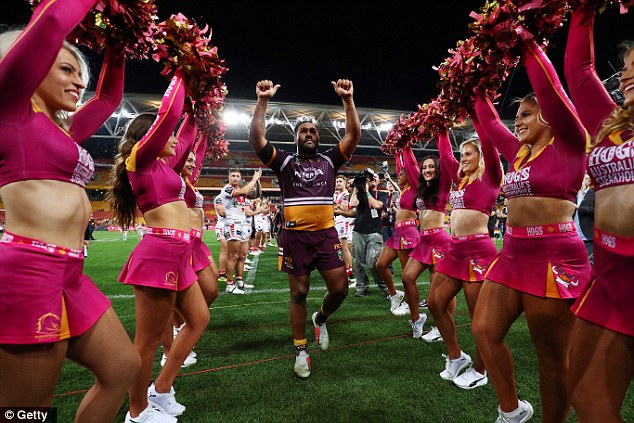 His comments drew some attention on social media, with most taking the comments in good humour.

‘Crack up! You da man Sammy!’ one Twitter user wrote.

While others weren’t as kind towards his routine. 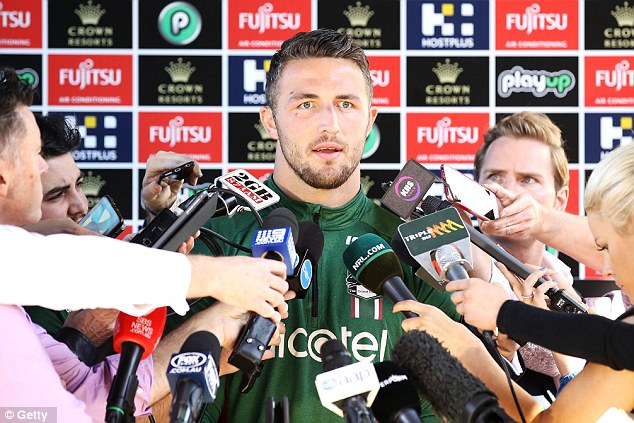 ‘Well stand up comedy is not a good career choice for thaiday (sic),’ one Twitter user wrote.

‘For a billion dollar game this has been seriously tacky so far,’ yet another responded.

Thaiday retired with 304 first grade appearances to his name and 40 tries in a 15 year career, he played every single of his 304 games for the Brisbane Broncos.

His comments about the Rabbitohs were in direct reference to the sexting scandal that saw a woman come forward and claim she had received inappropriate messages from Rabbitohs players.

The woman alleged the unnamed players flashed their genitals during a long video chat session.

Screenshots from the video chat allegedly show a man exposing his torso and genitals to the woman during their video conversation.

Another man was photographed with his pants down and baring his behind, captured in screenshots from the live video.

Rabbitohs bosses refused to confirm who the players were, The Daily Telegraph reported.

Souths chief executive Blake Solly told the paper he had ‘constructive and helpful’ discussions with the woman.

The young woman said she felt violated after the video chat took a dark turn on May 26.