San Francisco’s mayor on Wednesday pushed back against CNN anchor Jake Tapper’s criticism of residents of her city on Tuesday after a number of them were seen jogging and walking leisurely despite a ‘shelter in place’ order due to the coronavirus outbreak.

During a broadcast on Tuesday, Tapper and CNN’s chief medical correspondent, Dr. Sanjay Gupta, were visibly frustrated as they aired footage of San Franciscans enjoying a pleasant evening on the Embarcadero.

The Embarcadero is the popular pedestrian walkway that sits along the city’s northeastern waterfront shoreline. 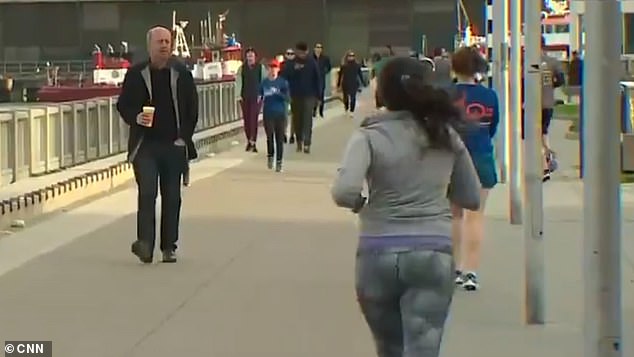 During Tapper’s broadcast on Tuesday, he showed images of San Francisco residents taking a leisurely stroll and jogging along the Embarcadero 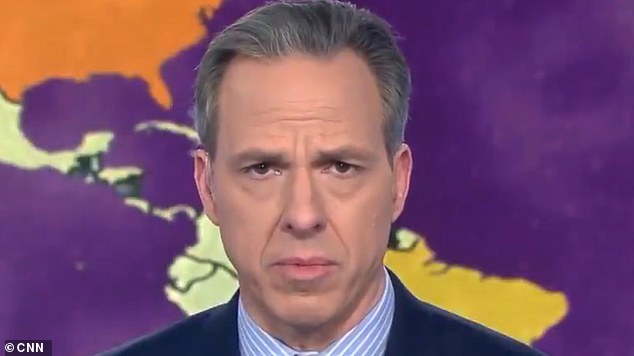 ‘They’re holding hands and walking down the street … This is actually kind of enraging,’ Tapper said on Tuesday

That means that the 6.7 million people who live there are to stay indoors, though it falls short of a full, mandatory lockdown, in which case people would need explicit permission to leave their homes.

As of Wednesday morning, California officials said there were 870 confirmed cases of coronavirus and 17 deaths, according to The Mercury News of San Jose.

One of those deaths was not a resident of the state, according to officials.

The Bay Area has also been hard-hit by the coronavirus. In Santa Clara County, officials report a total of 175 cases and six deaths as of Wednesday – the most of any county in the state.

Across the country, there were a total of 10,248 confirmed cases and 157 deaths.

In light of the spike in cases nationwide, Tapper and Gupta reacted angrily to the images from Tuesday evening, saying that some residents of the City by the Bay appear not to be taking the coronavirus pandemic seriously.

The CNN anchor said the images were ‘kind of enraging.’ 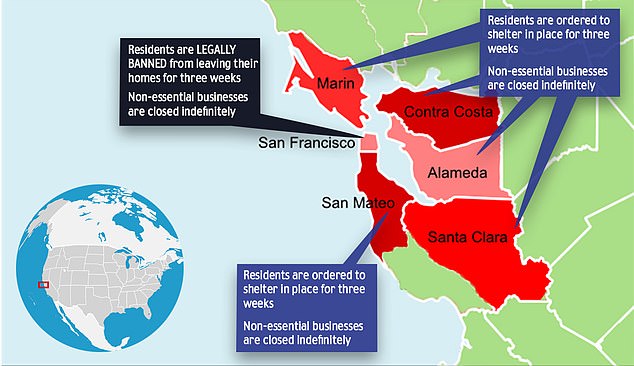 Six counties in the Bay Area ordered people to ‘shelter in place’ as of midnight on Tuesday. San Francisco city has legally banned people from leaving their homes for three weeks, with only shopping at supermarkets and doctors visits allowed 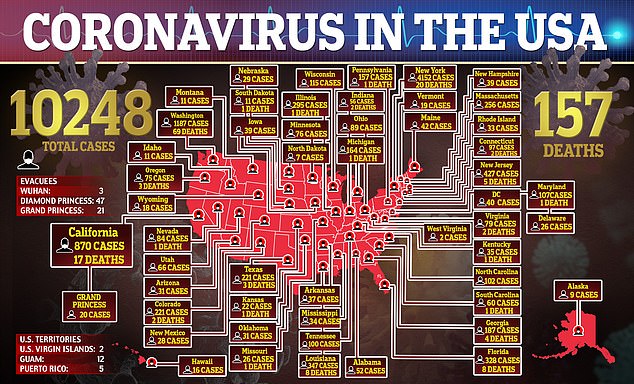 ‘[San Francisco Mayor London Breed] said to me that people are allowed – if they need to go out and go for a walk and get a breath of fresh air – they’re allowed to, as long as they social distance,’ Tapper said.

‘But that’s not what we just saw. We saw people going for jogs, people going about their life as if it’s normal.

‘We’re being told by the Centers for Disease Control and the National Institutes of Health that this is not normal.

‘First of all, we see a bunch of people who are not social distancing.

‘They’re holding hands and walking down the street … This is actually kind of enraging.

Gupta agreed with Tapper’s assessment, saying: ‘Jake, I’m with you on this…

‘Despite what we’re hearing from the White House [about the severity of the outbreak], I still get the impression that people in many places aren’t taking this seriously.

‘I think that’s a problem.’

Gupta stressed that he was worried that people aren’t engaging in social distancing, and the result could be a dramatic increase in the rate at which the coronavirus spreads.

He said that social distancing is the best way to prevent the US from experiencing a situation similar to what is taking place in Italy, where the country is on full lockdown and hundreds of deaths are being reported every day.

Tapper and Gupta were ‘fed up’, as this Twitter user noted

‘Should they be huddling in the dark in their homes?’ asked this Twitter user, who was critical of Tapper 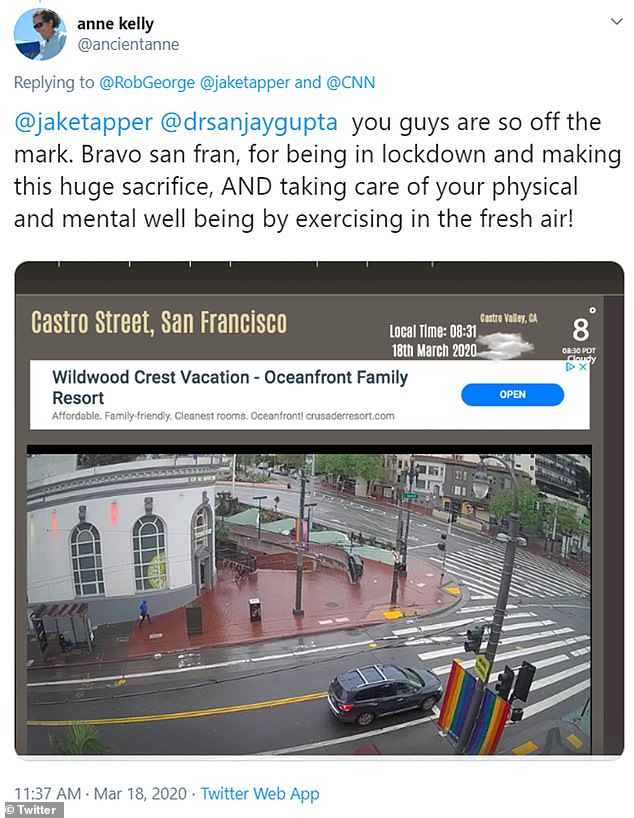 Another Twitter user noted that city residents were permitted to ‘walk, run, bike by ourselves and with people we live with’

Italy, a country of 60 million, registered 2,978 deaths on Wednesday after 475 more people died.

Italy was likely to overtake China’s 3,249 dead – in a land of 1.4 billion – upon the release of Thursday’s figures.

The mayor, Breed, appeared on CNN’s The Situation Room with Wolf Blitzer on Wednesday to clarify that people are allowed outside to go jogging and take a leisurely stroll.

Breed also pointed out that most people seen holding hands in the images which were shown by CNN on Tuesday were couples who lived together.

The mayor said it would be unrealistic for couples or those who share the same household to practice social distancing.

‘People in San Francisco are definitely permitted to go out, to run, to exercise, to ride bikes, this is not about a vacation,’ she said.

‘If people are in the same household, they do not necessarily need to keep the same distance from members of their household; it would be impossible for them to do that.

‘I think ultimately, it’s not a fair assessment to say people are just out and about and not necessarily following the social distancing protocols we put into place, because they are.

When asked what activities are prohibited by the shelter-in-place order, Breed said that residents are not to visit ‘places we’ve already closed’ like hair salons, nail salons, and retail stores.

‘We want you to only go out if absolutely necessary for essential services,’ Breed told CNN on Wednesday, though she added it is acceptable for residents to go jogging or take a walk.

‘The ultimate goal is to prevent people from contacting one another that could lead to the spread of the virus.’

Several Twitter users hit out at Tapper, accusing him of making sweeping generalizations based on one camera frame while failing to note that most of the city had been shut down and people were indoors.