Sen. Bernie Sanders has a 7-point lead in Nevada over former Vice President Joe Biden with that state’s caucuses just eight days away.

Sanders also continues to lead in national polls – with Morning Consult showing him 10 points ahead of Biden in a survey released Thursday. That poll also shows former New York City Mike Bloomberg in a strong third, just one point behind Biden.

Bloomberg’s rise has gotten attention from Sanders, who complained Friday about a Democratic National Committee rule change that could allow the New York City billionaire to be onstage at the next Democratic primary debate.

Sen. Bernie Sanders is head in a new Nevada poll by 7 points and a new national poll by 10 points after strong showings in both Iowa and New Hampshire 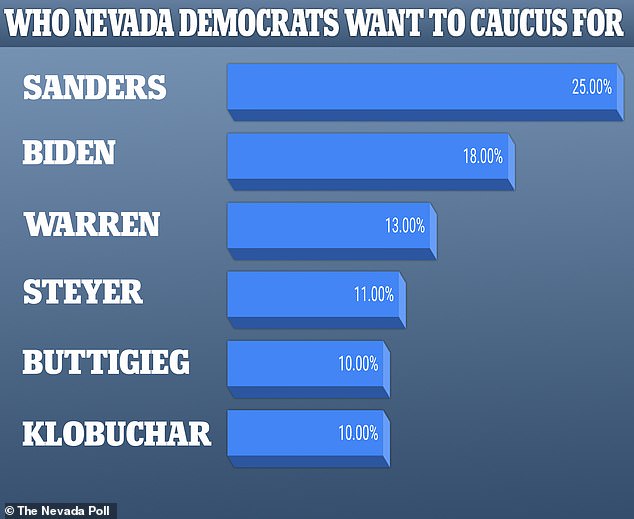 The Nevada Poll, as it’s called, has Sanders ahead of Vice President Joe Biden and Sen. Elizabeth Warren. Both Biden and Warren need to perform well in Nevada and South Carolina after disappointing finishes in the first two states 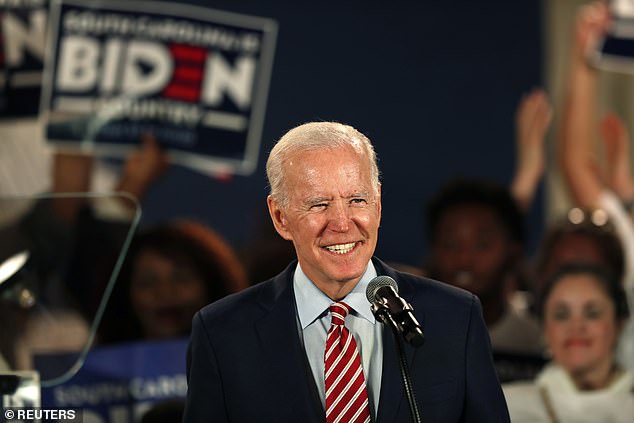 Sanders suggested the DNC was motivated by Bloomberg’s money.

‘That is what being a multi-billionaire is about,’ Sanders said on ‘CBS This Morning.’ ‘Some very good friends of mine who were competing in the Democratic nomination – people like Cory Booker of New Jersey, Julian Castro – work really, really hard. Nobody changed the rules to get them in the debate.’

‘But I guess if you’re worth $60 billion, you can change the rules,’ the Vermont senator complained. ‘I think that is very, very unfortunate,’ the 2020 hopeful added.

The rule change, which was announced in January, allows candidates to participate in the February debates if they earn at least 10 per cent of voter support in four national polls or 12 per cent in polls in Nevada or South Carolina – the two final states to vote this month.

A candidate can also qualify by earning at least a delegate from the Iowa caucuses or the New Hampshire primary.

Bloomberg’s campaign tells DailyMail.com that he’s just one poll away from qualifying.

Bloomberg, who didn’t enter the race until late November, is technically skipping the first four states – Iowa, New Hampshire, Nevada and South Carolina – and will begin his hunt for delegates on Super Tuesday, when 14 states vote.

The Nevada Poll, conducted by WPA Intelligence on behalf of the Las Vegas Review-Journal and AARP Nevada,  doesn’t have Bloomberg as an option because he’s not on the ballot there.

In that survey, the Vermont senator wins the support of 25 per cent of likely Democratic caucusgoers, followed by Biden with 18 per cent and Sen. Elizabeth Warren with 13 per cent.  Billionaire Tom Steyer followed with 11 per cent and Sen. Amy Klobuchar and former South Bend Mayor Pete Buttigieg are tied with 10 points each.

Nevada voters will caucus next Saturday.

Nationally, Morning Consult shows Sanders with 29 per cent, gaining three points since winning in New Hampshire. Biden is in second place with 19 per cent, losing four points since his fifth place showing in the Granite State.

Bloomberg stands at 18 per cent in the Morning Consult survey.

He’s followed by Buttigieg with 11 per cent. Buttigieg also had the support of 11 per cent of Democratic voters nationally before the New Hampshire primary.

And Klobuchar, who came in a strong third-place in New Hampshire, benefited by only growing her support by 2 points.

She now has 5 per cent support nationally.

When voters were asked to choose between Sanders and Bloomberg the Vermont senator won by 15 points.

The democratic socialist beat Buttigieg by 17 points and Klobuchar by 21.

When voters were asked to choose between Biden and Sanders, Sanders won by four points.

Sanders’ fellow progressive, Warren, came the closets to unseating him.

In a two-person race between Sanders and Warren, he wins by just 2 points.