Sarah Ferguson posts rare Instagram photo of her ‘united, loving family’ – as she self-isolates with ex-husband Prince Andrew amid lockdown

Sarah Ferguson shared a rare Instagram photo with Prince Andrew and their daughters to mark International Family Day on Friday – seeming to confirm that she is self-isolating with her ex-husband amid the coronavirus lockdown.

In the unseen snap, Fergie, 60, is seen alongside her former husband with each arm wrapped around their two daughters, Princess Eugenie and Princess Beatrice.

The Duchess of York wrote: ‘On International Family Day.. I am so proud of our united loving family.’

Fans were quick to praise the family, with one writing: “We love you!” Another added: “Beautiful House of York family.” A third sweetly noted: “Beautiful picture.”

It is believed Princess Eugenie, 30, and husband Jack Brooksbank are staying at Royal Lodge Windsor with Prince Andrew and the Duchess of York – while Princess Beatrice has been keeping a low profile.

Social media users reacted to the post, with one commenting: ‘Wonderful to see you all together.’

Another wrote: ‘Such a sweet family pic!’, with a third adding: ‘Lovely photo.’

The royal also shared a picture of her reading the children’s book ‘In Wibbly’s Garden’ earlier today, as part of her daily Youtube channel ‘Storytime with Fergie and Friends’, to encourage little ones to read while in lockdown.

In another snap posted yesterday, Fergie donned a flower crown while holding up a copy of Judith Kerr’s ‘Mog the Forgetful Cat’.

Despite being at home amid the coronavirus pandemic, she has had no shortage of famous faces joining her, with Michael Whitehall recently reading a story in a video shared to the page.

The photograph of her family comes as Prince Andrew faces further controversy, after £355,297 paid to his private secretary was branded an ‘unauthorised trustee benefit’.

Amanda Thirsk, the Duke of York’s long-standing private secretary who resigned shortly after his BBC Newsnight interview last year, was given the money as payment for her work as trustee of the Prince Andrew Charitable Trust (PACT).

Ms Thirsk was a trustee for PACT and director of its profit-making subsidies including Pitch@Palace – an organisation that matches entrepreneurs with investors. 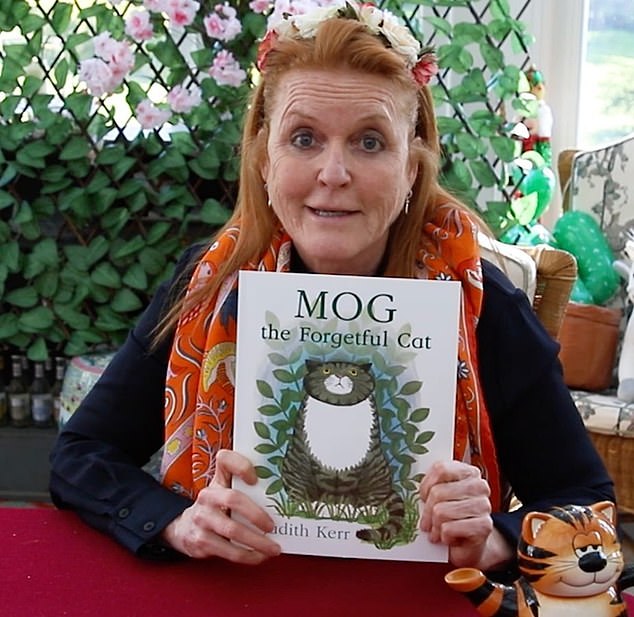 In a snap posted yesterday, Fergie donned a flower crown while holding up a copy of ‘Mog the Forgetful Cat’, as part of her daily Youtube channel to encourage children to read

She was paid £355,297 in instalments over a five-year period and there has been no suggestion of wrongdoing on her part, reported the Financial Times.

According to a note on PACT’s annual report ‘the Charity Commission raised concern about remuneration paid to one of the Trustees (who has since resigned) in their role as a Director of the subsidiaries’.

Charity trustees cannot be paid solely for being a trustee, but might receive payment for carrying out building work, providing a specialist service, providing premises such as a meeting room or for any administerial and secretarial work, according to Government guidance.

The payments to Ms Thirsk were ‘considered to be an unauthorised trustee benefit’ and had to be paid back by the Duke Of York’s household.

A statement from PACT’s trustees revealed the payments were made to Ms Thirsk for her role as a director of the PACT subsidiaries.

It added: ‘In correspondence initiated by the current Trustees, the Charity Commission raised a concern about the remuneration paid to Amanda Thirsk, which the Commission considered to be an unauthorised Trustee benefit.

‘Having considered the matter in light of the Commission’s concern, the Trustees concluded that the best interests of the Trust would be served by securing full reimbursement, which was agreed to and paid by HRH The Duke of York’s office.’