Saving paradise: How a knockabout farmer is on a life-long mission to save a national treasure

There probably isn’t a bloke that lives along Australia’s iconic Great Ocean Road in southern Victoria that wouldn’t buy Shayne Neal a beer.

Though it’s unlikely he’d ever find the time to collect it.

At 39, Mr Neal has achieved more than most will achieve in their lives, including representing Australia in the World Ploughing Championships.

Shayne Neal and a couple of Sugar Gliders at his Ecolodge in Cape Otway. The cheeky critters were searching for honey 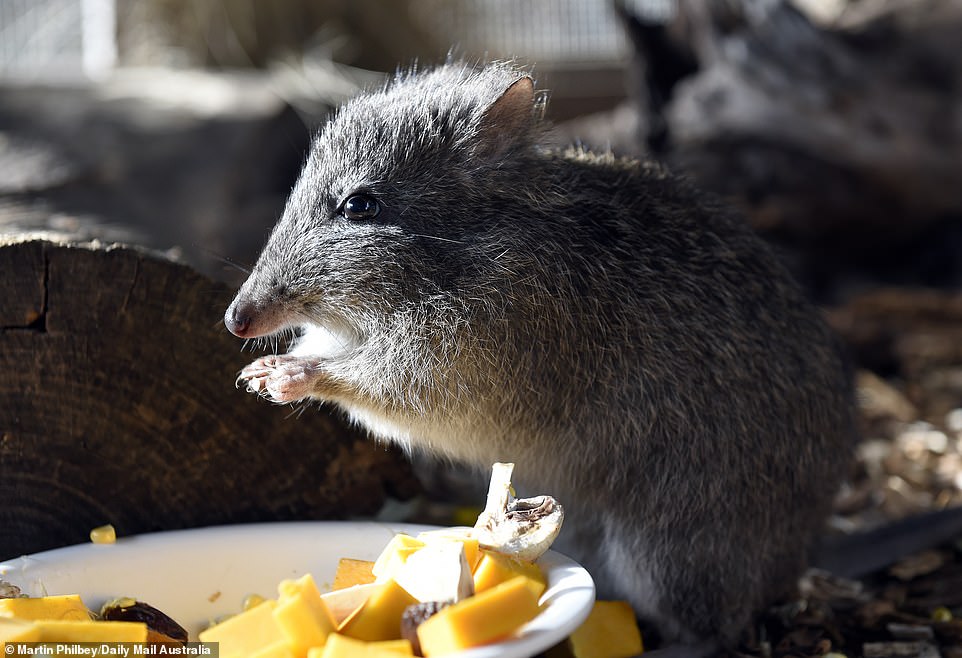 A Long-nosed Poteroo enjoys a serving of fruit at the Conservation Ecology Centre in Cape Otway. She lives alongside a family of Sugar Gliders. The animals are at threat from foxes and feral cats out in the wild

The likable, knock-about farm boy from Scott’s Creek – about 120kms  northwest of Victoria’s iconic Twelve Apostles along the Great Ocean Road – decided as a university student that he was going to do his bit to save his part of the world.

His latest project promises to bring a slice of Hollywood to the Aussie bush.

Set designer Brian Massey, who brought to life The Lord of the Rings’ Hobbit in New Zealand, has joined forces with Mr Neal to create a native Aussie wilderness experience like no other.

Nestled in the 50 acre property just outside of Apollo Bay, Wildlife Wonders will allow visitors to experience nature in its purest form outside of being lost in the bush.

‘I think it’s the only large property development in the region not to have received an objection from the local community,’ Mr Neal said.

The zone itself is an ecological masterpiece, with Mr Neal and his team transforming the already lush forest into a nature reserve for popular and endangered wildlife and fauna.

The state and federal governments have already contributed about $3 million between them to the $12.6 million project, with the rest being sourced by environmentally friendly businesses and individuals. 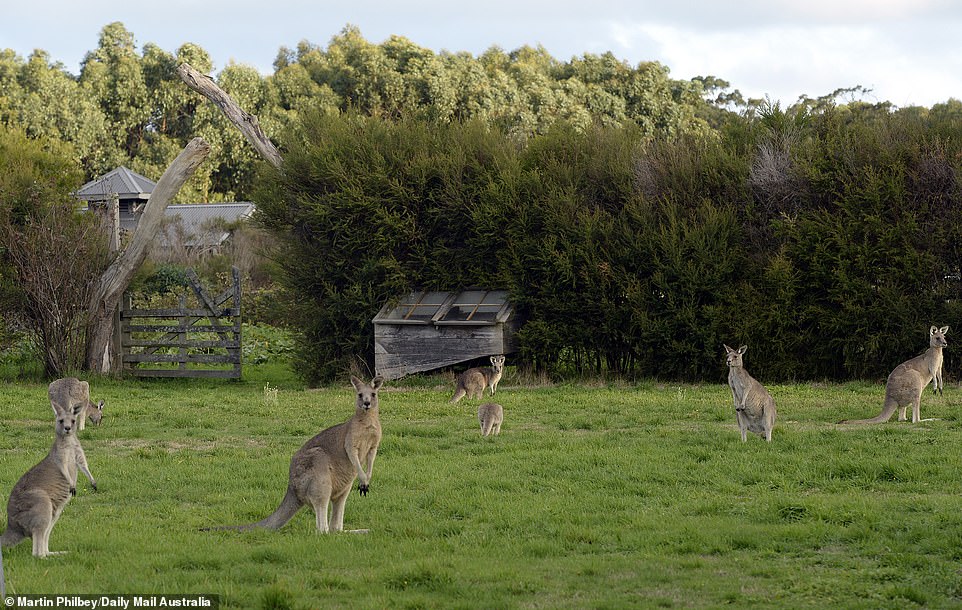 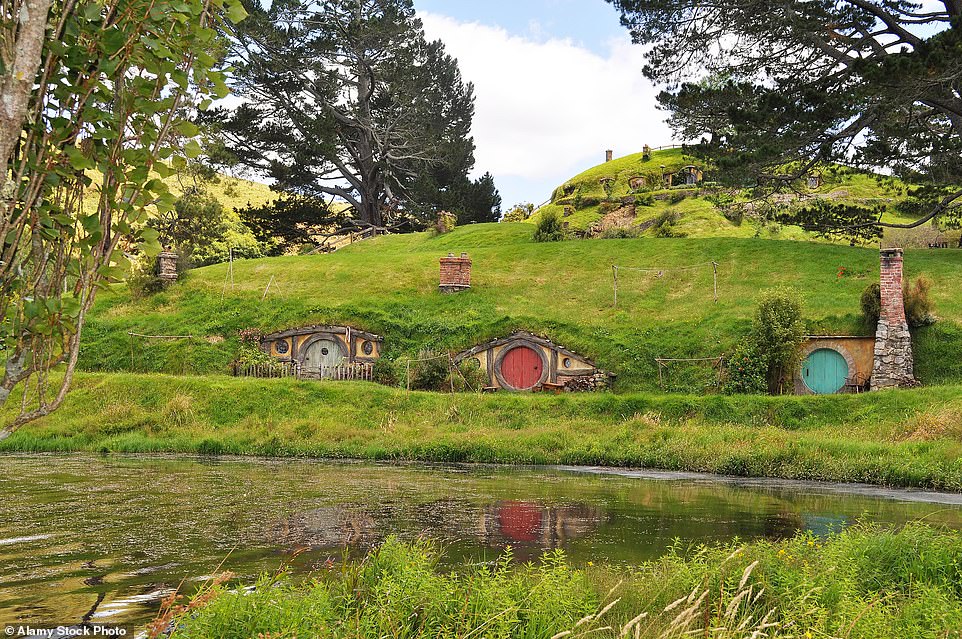 Hobbiton in New Zealand has become a popular tourist attraction in New Zealand. Shayne Neal has the very same set designer working on his wildlife experience just outside of Apollo Bay 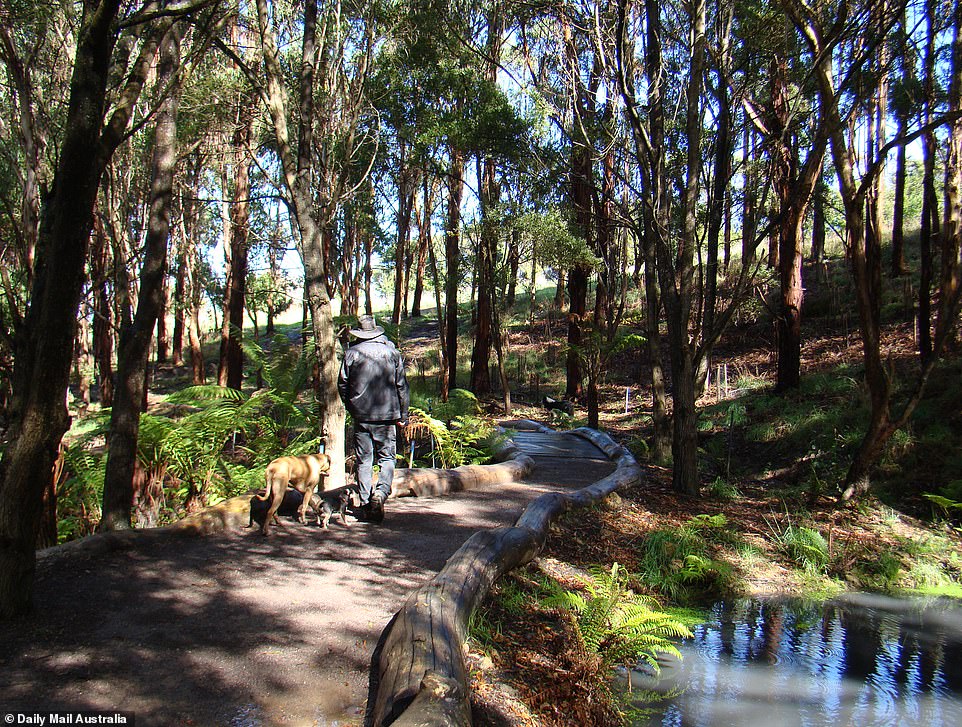 A section of Wildlife Wonders which is under construction. Shayne Neal has brought in native gum trees to line the paths that will be walked by tourists when it opens next year 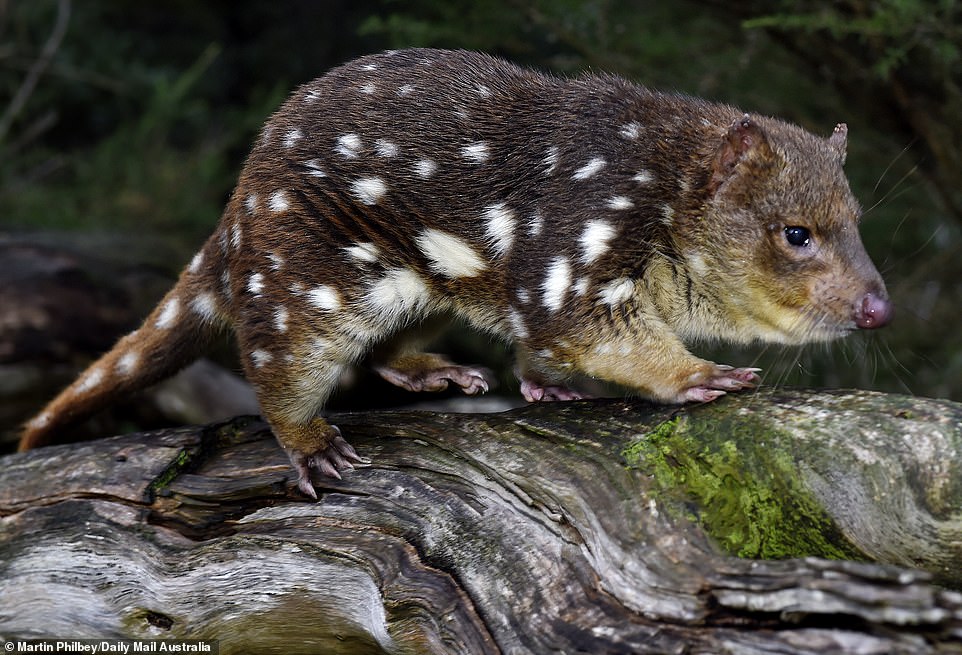 An endangered Tiger Quoll lives at the Conservation Ecology Centre. Visitors are able to get inside the enclosure with him, but not too close. The Tiger Quoll has a powerful bite

When complete, visitors will be guided through the serene forest, which will hide the predator-proof fences that keep the native creatures safely inside and the scurrilous foxes and feral cats out.

The project has become Mr Neal’s obsession after coming up with the idea over a bottle of red in his 20s.

Today it is almost a reality.

With his trusty ‘scat seeking’ dogs Gus and Teddy – and the not-so-helpful Neil the cheeky chihuaha – Mr Neal and his team work tirelessly to bring the experience to life. 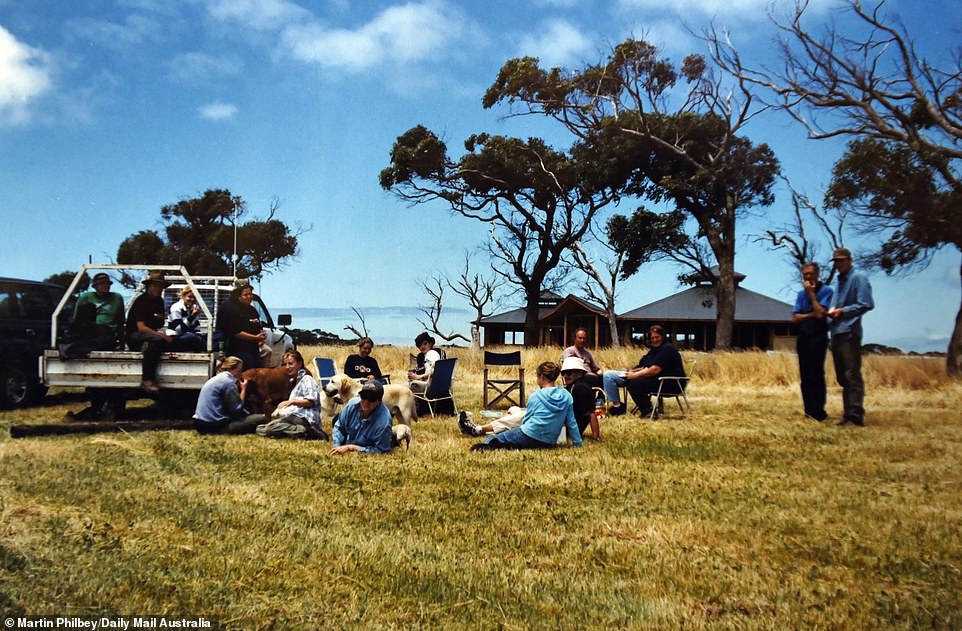 Shayne Neal built the Ecolodge with his own two hands with a little help from his friends. They then replanted hundreds of gum trees which reconnected the farmland with the national park

The iconic Twelve Apostles brings in tourists from across the globe to the Otways and the township of Apollo Bay. Tourists can be seen parking along the Great Ocean Road and stepping out into danger’s way to grab photos of native animals

From restoring endangered gums to saving mighty forest ferns from Country Fire Association fire tracks, Shayne and his crew hope to bring to life a natural experience unlike anything seen on the coast.

‘At the moment you see tourists stopping along the Great Ocean Road and walking out onto the road to take photos of koalas and that makes for a very dangerous situation,’ Mr Neal said. ‘This will allow them to come and see the wildlife safely and in a very natural environment.’

Upon winding their way through the forest, visitors are greeted by an epic and unforgettable ocean vista.

Wildlife has steadily returned to the area under Mr Neal’s reforestation efforts.

Situated about 162km southwest of Melbourne, and spanning over 100,000 hectares, the park covers both coastline and hinterland in the Otway Ranges and includes both beaches and forest, accessible via extensive walking trails

The Long-nosed Potoroo is part of the kangaroo family. They are at risk in the Otways due to habitat loss, altered fire regimes and predators such as cats and foxes.

In 2012, holidaymakers in the Otways collected the first evidence of endangered Tiger Quolls in almost a decade

Aided by his wife Lizzie Corke – the financial whiz of this dynamic duo – the couple has already established an environmentally friendly and award winning retreat and ecological research centre on Cape Otway.

The Conservation Ecology Centre sees the couple and their dedicated team work towards delivering solutions to the most urgent conservation challenges in the Otways region.

The centre encompasses The Great Ocean Ecolodge – a guesthouse where visitors can relax among the koalas and kangaroos and enjoy the serenity of the forest with guided tours by Mr Neal himself.

The lodge is entirely solar powered and ecologically responsible, resting gently in the landscape, with all profits invested back into wildlife conservation.

It is here Mr Neal gets to interact with the creatures he loves, such as the endangered Tiger Quoll, Sugar Gliders and the Poteroos. 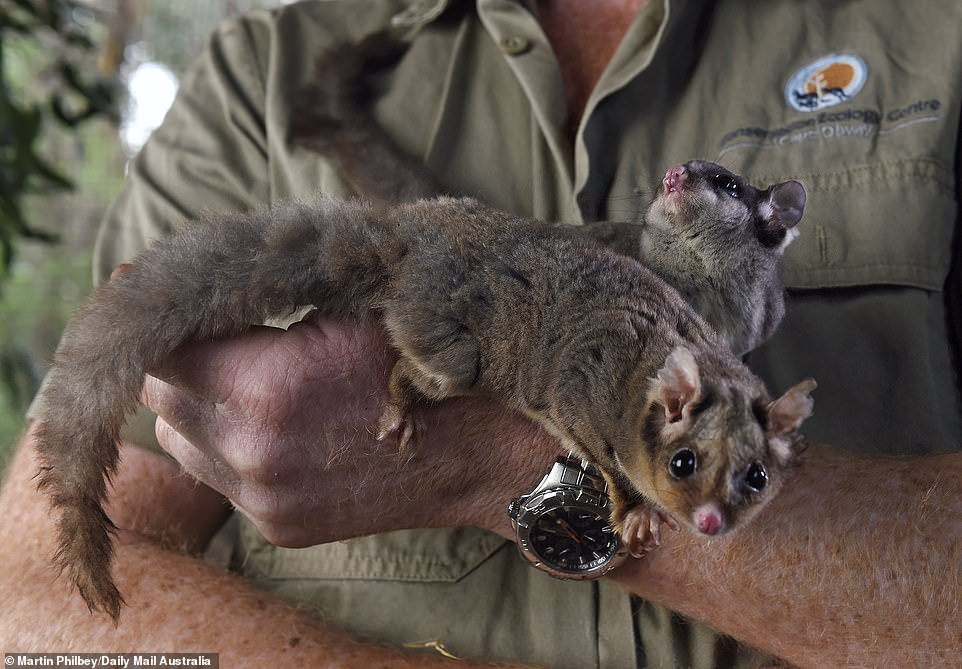 A couple of cheeky Sugar Gliders search for traces of honey on Shayne Neal at the Conservation Ecology Centre at Cape Otway. Mr Neal is in the process of building a wildlife sanctuary that will allow tourists to see Australian wildlife in their natural habitat 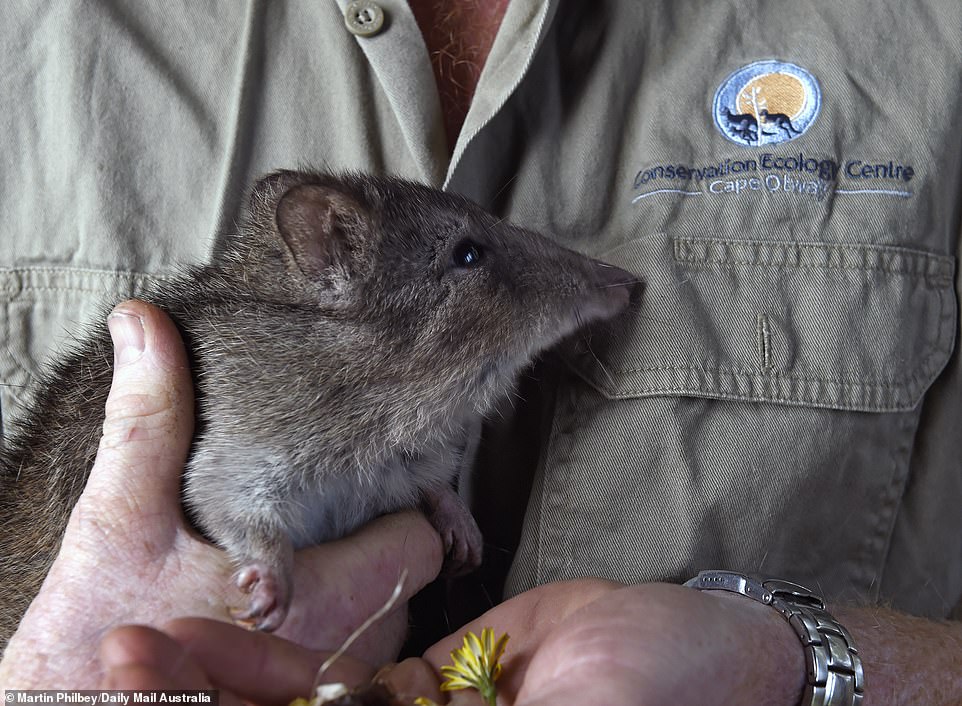 Pippette – the Long-nosed Poteroo takes a snuggle from Shayne Neal. She lives with her son Pipsqueak at the Conservation Ecology Centre on Cape Otway. It is here Mr Neal and his team go about trying to save the planet

The Tiger Quoll, a spotted carnivorous cat-like marsupial, was thought to have died out in the area until a rediscovery in 2012.

One now lives in captivity on the property and is part of a breeding program to help restore their numbers.

Mr Neal built the entire lodge in 2002 with his own hands using skills he learnt on the farm with his rebellious dad, who was a conservation pioneer back when clearing forests wasn’t baulked at.

‘It went against his grain and he got fined (for not clearing his land). In the end he gave in … he cleared all his property and as soon as he got his certificate he grew it all back,’ Mr Neal said.

With the help of family and friends, the couple built the Ecolodge on farmland from scratch and replanted trees that would reconnect it with the forest. 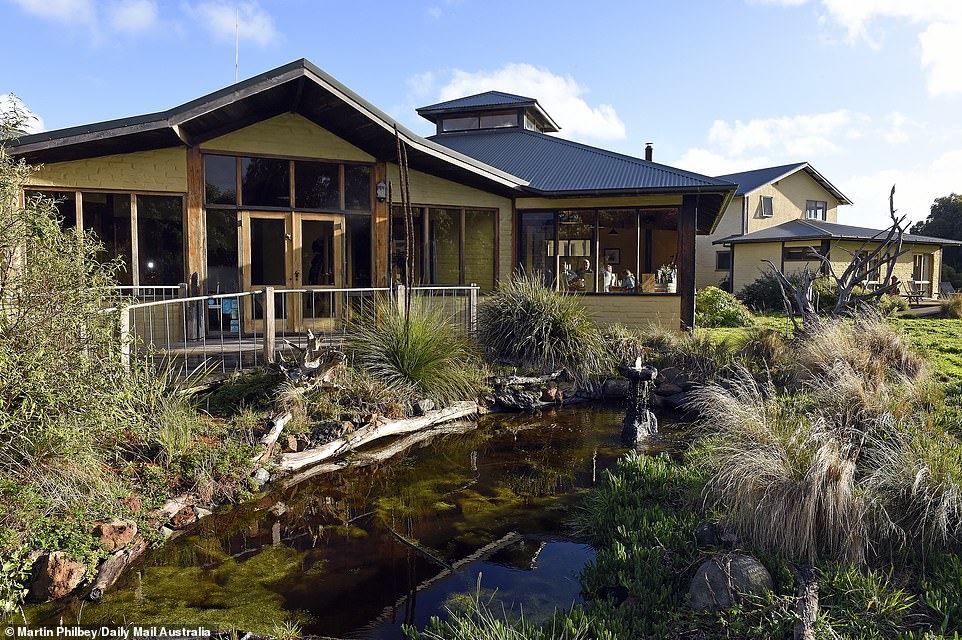 Today the Ecolodge is surrounded by trees and and calming waters. It provides visitors the opportunity to bond with nature and the surrounds while providing income for the Conservation Ecology Centre’s conservation efforts 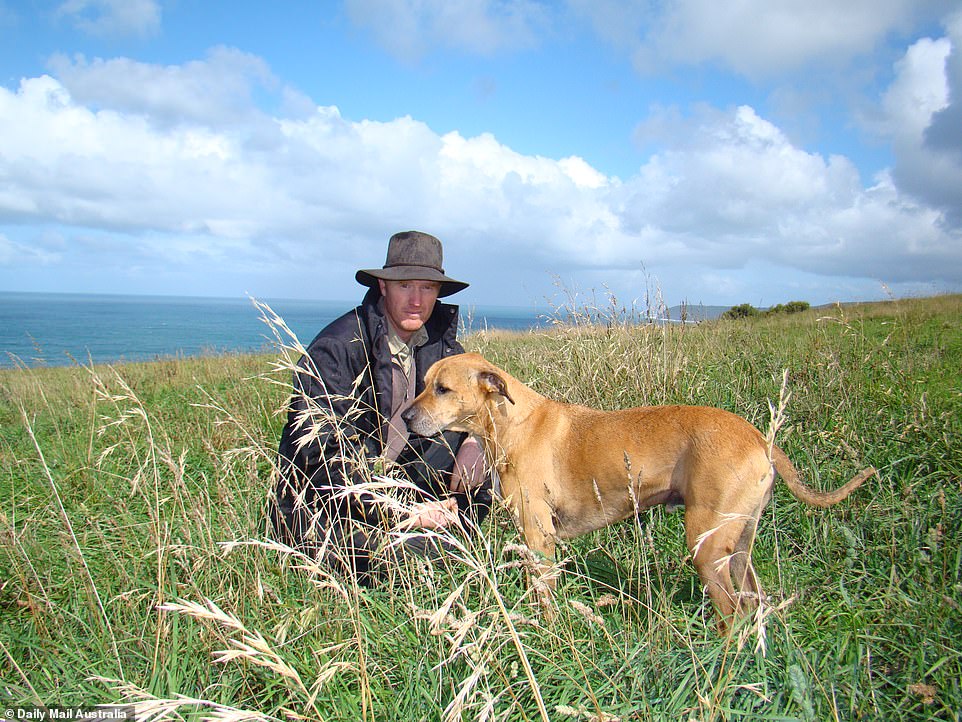 Shayne Neil and his trusty dog Teddy. The faithful hound is able to sniff out Tiger Quoll scat, which is which is DNA tested and used to help further research. Visitors at Wildlife Wonders will end the tour with this magnificent view across Bass Strait, where whales can be seen migrating

It would become the base of operations for the couple’s mission to save the Otways’ wildlife from predators such as foxes and feral cats that terrorise the native animals.

Sometimes the animals are their own worst enemies.

Only a few years ago, Otway koalas literally ate themselves out of house and home.

They decimated the region’s manna gum population and were starving themselves to death.

The Centre is working to restore the woodlands, working with the community to reinstate natural fire regimes through ecological burning and planting the next generation of young trees to restore the balance.

Australia’s mammal extinction record is the worst in the world – over the last 200 years 29 mammal species have become extinct.

Working with local landowners and stakeholders, the Conservation Ecology Centre is providing knowledge to help save endangered animals such as the Tiger Quoll and Long-nosed Poteroo.

All profits made from the Wildlife Wonders experience will go back into the Centre’s conservation research.

‘The whole concept behind this tourism venture is about creating a sustainable  funding stream for that research in the Otways and that conservation work ranging from research to plantings, supporting landcare and so forth. It’s massive,’ Mr Neal said.

To contribute to the Conservation Ecology Centre or book a reservation at the Ecolodge visit  https://www.conservationecologycentre.org/