Schalke coach Domenico Tedesco brushed off the pressure and adopted a bullish tone ahead of his side’s daunting Champions League clash at Manchester City.

Reports in Germany have claimed Tedesco is on the brink of the sack after overseeing a dismal campaign in the Bundesliga.

Schalke have failed to live up to expectations after last season’s superb second-place finish and are currently toiling in 14th with work to do to avoid relegation. 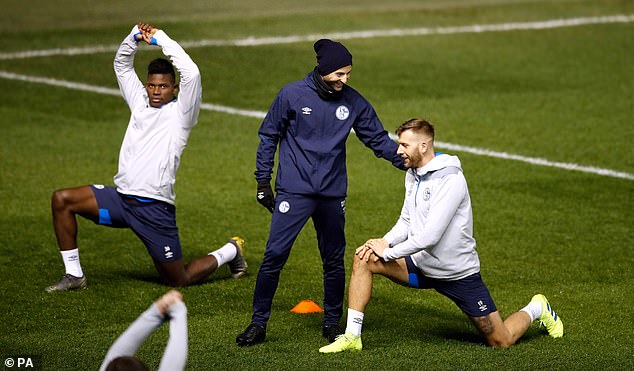 It has even been claimed that it is only due to Schalke’s ongoing presence in the Champions League that the 33-year-old is still in his position.

And that European run is widely expected to come to an end on Tuesday with Schalke going into the second leg of their last-16 tie at the Etihad Stadium trailing 3-2 on aggregate.

Tedesco, however, is refusing to concede defeat.

Speaking at his pre-match press conference in Manchester, he said: ‘We got onto the plane wanting to use the small chance we’ve got as clear outsiders. 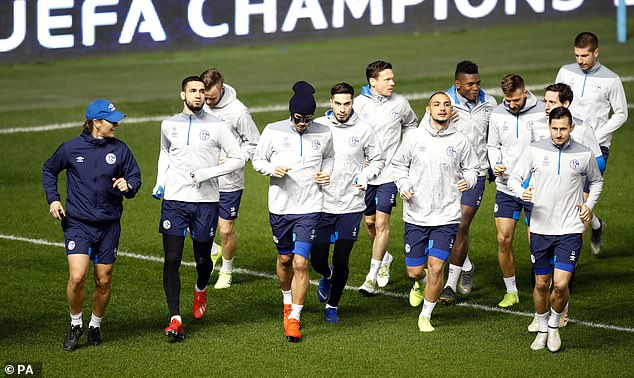 ‘The situation in the league is precarious but nevertheless we are going to try with all our effort. We deserve to be playing in the last 16 of the Champions League.’

Tedesco conveyed positive news of the City fan who was seriously injured in an attack after the first leg in Gelsenkirchen last month. There have been few updates since the incident but the 32-year-old, who remains in hospital in Germany, is believed to be making progress.

Tedesco said: ‘We are really happy that he is on the right way. That was the information we got last week. We are here with him in our minds.’