A school has come under fire after it published a newsletter urging parents to teach their children about racism and Black Lives Matter using a picture of Shrek.

A furious parent criticised the ‘shocking’ and ‘insensitive’ letter which recommended  caregivers ‘begin with a picture of Shrek’ to explain racial prejudice to students.

The newsletter, sent out on Monday by St Matthew’s Primary School in Blackburn, Lancashire, was removed from the school’s website after staff received a complaint about use of the cartoon ogre.

One parent, who wished not to be named, said: ‘It was shocking and insensitive to liken racism and racial inequality to a cartoon character.

‘I’m sure they were well-intentioned but it just shows how much we still have to learn in tackling these issues. To compare black people to Shrek is very offensive.’

The letter has also caused a furore on social media among those who believed there was nothing wrong with mentioning the ogre to make a point about discrimination.

The controversial post read: ‘Begin with a picture of Shrek. Ask who it is and what your children tell you about him.

‘The facts that the children know about Shrek, do they know them because that is what they see on the outside, eg. green, big, ugly etc, or do they know things about him because they know his story eg. he loves Fiona, Donkey annoys him but becomes his best friend etc?’

The Black Lives Matter section of the newsletter, which contained an assembly resource, was deleted from the school’s website after council bosses received a complaint about its content.

In a letter to parents, headteacher Julian Rogers said: ‘The assembly was shared with our parents as the choice of character was based on a figure that would be familiar to the children, a character who experiences discrimination and prejudice based on his outward appearance.

‘The Black Lives Matter movement has thirteen guiding principles. This assembly idea was not intended to address all these; rather to focus on a few – empathy, diversity and collective value.

‘We teach our children that we are all equal regardless of religion, race, sex or anything else as we are all unique.

‘I am truly sorry if the choice of character used to help children understand difference caused offence.’ 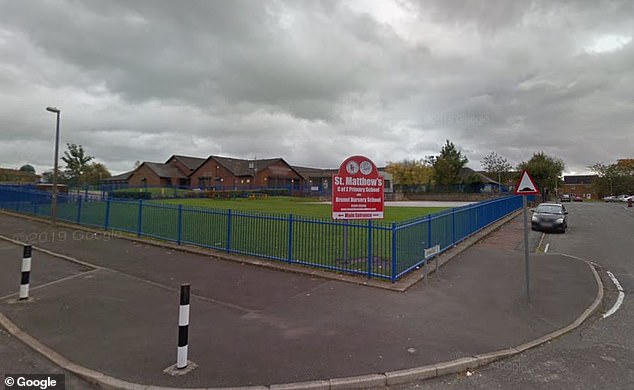 The newsletter, sent out on Monday by St Matthew’s CoE primary (pictured) in Blackburn, Lancashire, was removed from the school’s website after it received a complaint about its use of the cartoon ogre

Mr Rogers added that the school had taken part in a council programme to encourage mixing between schools in the community, which he said had been ‘vital’ in helping support development for the pupils.

However, many people took to social media to argue the school should not have to apologise for using a fairytale character to make a point.

One posted: ‘It’s an easy way to help kids relate to a situation of being treated differently because you look different.

‘Young children who have been brought up/treated properly will struggle to understand racism without an example such as this.

‘It’s the whole point of fairytales, and actually one of the biggest lessons behind Shrek.’

Another user stated: ‘ Whoever complained had clearly missed the basic message of Shrek – judging people by their external experience is silly and wrong.

‘Shrek is a good guy, despite being a green ogre, Fiona is the same person whether a green ogre or human. And the villain is the one who judges them by their appearance.’

Blackburn with Darwen Borough Council’s head of education, Jo Siddle, said: ‘We are aware that there has been a complaint.

‘The Council has a wide programme available to support schools with a variety of home resources for schools, teachers and parents.

‘There’s a huge amount of work in our schools to help more children and young people from diverse backgrounds have opportunities to learn together and form friendships.

‘The Schools Linking programme is about giving schools in different parts of the borough opportunities to meet up and collaborate on learning activities that explore themes around identity and belonging.

‘It has been recognised nationally for the way schools are working together to support their pupils’ spiritual, moral and cultural development.

‘Other work that teaches valuable life lessons via the ‘Kindness Matters’ programme has been particularly well received with pupils.

‘As education leaders it’s so important that we give children growing up in different parts of the borough chances to learn from one another, to explore different cultures and religions, and to make friends when they might not normally have those opportunities.’