Up to 14 children are fighting for each place at top primary schools, a major audit shows today.

It found that some catchment areas stretch barely 100 metres from the main gates.

Children living only a minute’s walk away – often on the same street – are being rejected. The figures also show that 50 per cent of secondaries are now oversubscribed – compared with 43 per cent three years ago.

Experts said a failure to build enough schools, a baby boom and immigration had created a ‘perfect storm’ for the education system.

The smallest catchment – at a Somerset primary – is just 93 metres

At the most oversubscribed primary schools, just 7 per cent of applicants, or one in 14, receive a place

For sought-after secondaries the figure is 8 per cent, or one in 12

Up to 93 per cent of secondary schools and 88 per cent of primaries are oversubscribed in some areas.

At a primary school in the historic town of Taunton, children who live just 100 metres from the school gates will miss out on a place this year.

The farthest-away pupil admitted, based on distance, to St Andrew’s Church School this month lives 93 metres from the site, according to Somerset Council. While it is a Church of England school, it does not prioritise children of faith, which makes it even more extraordinary that its catchment area is so small.

Instead, it grants places to children in care – known as ‘looked-after children’ – first, then siblings of current pupils and then children who live closest to the school. It holds a ‘good’ rating from Ofsted.

Artist Susie Thomas, 37, (pictured above) is delighted her daughter Phoebe, four, will follow her older brother, Max, seven, by starting at St Andrew’s next week.

She said: ‘We live very close to the school but we didn’t take it for granted we would get in.’ 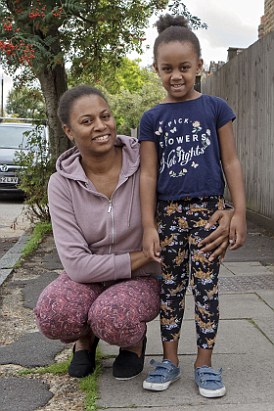 The nation’s most over-subscribed primary school rejected almost 400 children for this year’s intake. Brindishe Lee, in a residential part of Lewisham, South East London, received 426 applications for only 30 places.

The neighbourhood is said to have a baby boom in recent years after many young families moved in. Brindishe Lee was rated outstanding at its last Ofsted inspection in 2011. Novia Taitt’s daughter Ann-Marie, five, (pictured above) secured a place last year.

Mrs Taitt said: ‘I looked at the reports and statistics in terms of achievement and it’s been consistently high in terms of reading and writing and core learning achievements. The teachers are excellent, it’s very friendly. When she started in reception in September, their approach is that you can talk to the teachers.’

The data was obtained by researchers who submitted hundreds of freedom of information requests to town halls and schools. Children living more than 93 metres from St Andrew’s Church School in Taunton were rejected for this September’s intake.

At St Augustine’s Roman Catholic primary in Middlesbrough infants more than 140 metres away were refused. And at Oakgrove School in Milton Keynes applicants living more than 150 metres away did not receive a place. All three schools were rated good by Ofsted, rather than outstanding.

The problem is not confined to high-density cities or exclusive boroughs.

The top ten smallest catchment areas include schools in Torbay in Devon and Stroud in Gloucestershire, as well as in Chester and Widnes.

The data did not include faith schools, some of which may have even smaller catchments. Most schools admit children in care first, followed by pupils’ siblings before handing out places on the basis of distance.

Although the proportion of secondary schools that are oversubscribed has risen since 2014 for primary schools it has fallen – from 47 per cent to 43 per cent last year.

Topping the secondary school list was Dixons Trinity Academy in Bradford, which received 1,318 applications for 112 places, meaning just 8 per cent received a place for this September.

Today’s data follows a warning from the Local Government Association that the country faces an ‘emergency’ when it comes to secondary school places. According to the LGA, 134,000 children will be without a secondary school place by 2023/24 unless more classrooms and schools are built. The crisis comes following a rise in immigration since the 1990s from countries which tend to have higher birth rates than that of the UK.

The Government has said this contributed to a surge in births in the 2000s as women from some other nations tend to have larger families on average.

The squeeze was first felt in primary schools, with heads having to create new classrooms and bumper year groups to accommodate more children. Now that issue is transferring to secondaries as the pupils move up.

He said: ‘We have the perfect storm of an ever-increasing population, a housing shortage and immigration.

‘The issue of oversubscribed schools runs across all house price brackets and all parts of the country.’

He warned that house buyers could no longer assume that buying within sight of an excellent school would guarantee their child a place. ‘Our research shows the difference between getting your children into an in-demand school or not can be a matter a few feet’, he said.

Minister for school standards Nick Gibb said: ‘By 2020, there will be one million more new places across the school system than there were in 2010.

‘The latest admission data also shows almost 94 per cent of secondary school applicants got one of their top three choices.’ 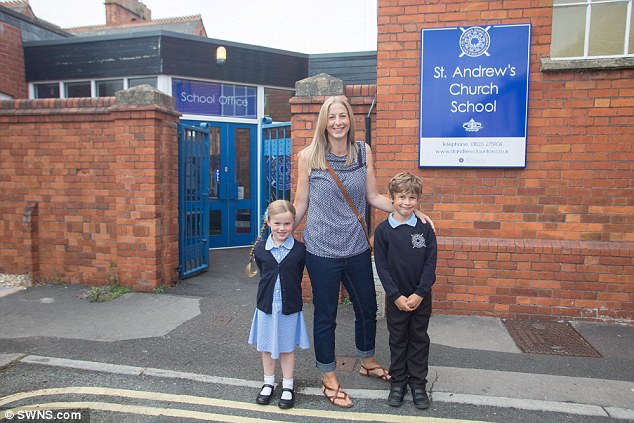 He added: ‘We are investing £23billion of capital between 2016-21, creating new schools and improving the condition of the schools we have.’

The 93-metre catchment is the smallest since the start of the collection of such data in 2014.

The previous smallest was 98 metres in 2016 for Fox Primary in Kensington, London.

Alan Smithers, professor of education at the University of Buckingham, said: ‘We have removed selection by merit and have replaced it with selection by ability to purchase or rent a property next to a good school.

‘A lot of parents do attempt to cheat the system by renting properties as close as possible to the school gates.’