Scientists may soon be able to combat aging by ironing out the wrinkles inside our cells.

A team from the University of Virginia made the discovery during a study investigating fatty liver disease, and linked the disease with cell membrane wrinkles that appear in the nucleus, where DNA is made.

These wrinkles multiply as we get older due to a protein deficiency, and cause fatty liver disease by preventing the cells from synthesizing protein properly, turning ordinary liver cells into fat.

But now scientists think we have a way of smoothing out these wrinkles by adding the protein back. This may even help fight the effects of aging on the body.

How they conducted the study

The University of Virgina study, which was published in the journal Aging Cell, investigated fatty liver disease, which is caused by fat building up inside the liver, impairing its function, and possibly leading to liver failure.

Professor Irina Bochkis, one of the study authors, discovered the creation of fat in the liver is caused by the appearance of wrinkles in the nucleus of the cell.

These wrinkles increase in number as we get older, and interfere with our cells ability to produce DNA.

‘We have the same DNA in every single cell but each cell is different,’ professor Bochkis explained.

‘So how does that work? Well, actually, certain genes need to be on in the liver and they have to be turned off in the brain, for example, and vice versa.

‘If they’re not turned off appropriately, then you have problems.’

‘When your nuclear membrane is no longer functioning properly, it can release the DNA that’s supposed to be turned off,’ she said. ‘So then your little liver cell becomes a little fat cell.’

She says this process eventually leads to a liver that resembles ‘Swiss cheese’. 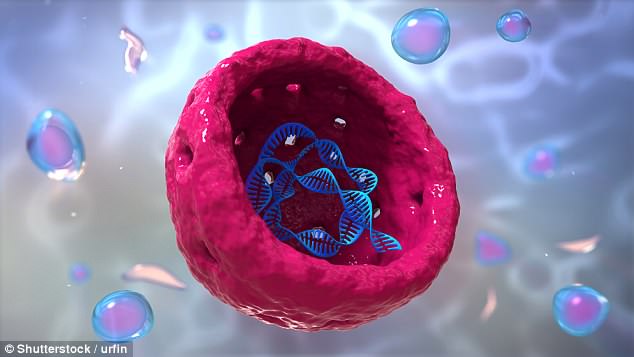 ‘Wrinkles’ in cells increase as we get older, and interfere with DNA production (stock image)

But there is hope that this process can be reversed, professor Bochkis says, and help recreate a more youthful liver.

The wrinkling in the cell membrane is caused by a lack of a lamin, a cellular protein.

Adding this protein back to the cell membrane can help reduce the wrinkles, ‘like Retinol helps smooth face wrinkles’, she says.

The problem is how to get the proteins to the cells. Professor Bochkis and her team hope to use modified viruses to transport the protein to the liver.

While using modified viruses to deliver treatments is not a new procedure, Bochkis says it could be especially easy for their purposes, because of the role the organ plays in detoxifying the body.

Professor Bochkis is optimistic about the future of their research.

‘You’re going to have normal, healthy cells, and they will appropriately express the genes that should be expressed.

‘You’re going to eradicate the stuff that shouldn’t be there,’ she said.

‘Every time I give this talk to colleagues, they say, “Do you think this is a universal mechanism?” In my opinion, I think it is.’

WHAT IS FATTY LIVER DISEASE?

Non-alcoholic fatty liver disease (NAFLD) is the term for a range of conditions caused by a build-up of fat in the liver. It’s usually seen in people who are overweight or obese.

A healthy liver should contain little or no fat. It’s estimated that up to 1 in every 3 people in the UK has early stages of NAFLD where there are small amounts of fat in their liver.

Early-stage NAFLD doesn’t usually cause any harm, but it can lead to serious liver damage, including cirrhosis, if it gets worse.

Having high levels of fat in your liver is also associated with an increased risk of problems such as diabetes, heart attacks and strokes.

If detected and managed at an early stage, it’s possible to stop NAFLD getting worse and reduce the amount of fat in your liver.

You’re at an increased risk of NAFLD if you: