Scientists have developed a robotic 3D-printed ‘third thumb’ that’s controlled using pressure sensors on the underside of the big toes.

The thumb, created by a researcher at University College London (UCL), is worn on the side of the hand opposite the actual thumb, near the little finger.

In trials, researchers found the human brain can adapt to the use of an extra thumb, but that it may alter the relationship between the brain and the biological hand.

Volunteers who were fitted with the third thumb effectively carried out dexterous tasks, like building a tower of blocks, with one hand, researchers found.

Having a third thumb could let people carry more objects than usual, hold and open a bottle of soft drink with one hand, or even become a maestro on the guitar.

The wearer controls the thumb, which is simply called ‘Third Thumb’, with pressure sensors attached on the underside of both their big toes.

Both toe sensors, which are wirelessly connected to the thumb, control different movements by immediately responding to subtle changes in pressure from the toes.

One sensor controls for flexion (movements going across the hand), and the other one for adduction (movements up towards the fingers and back down). 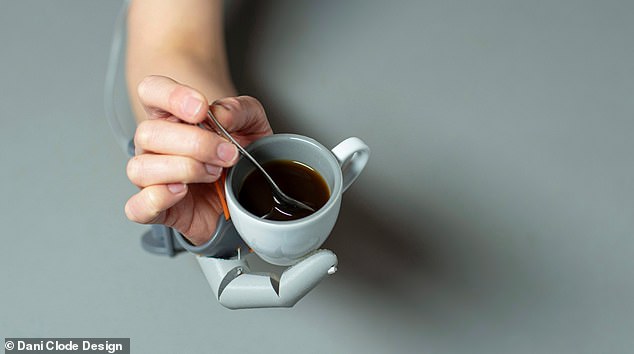 A user supports a coffee cup with the Third Thumb, whilst stirring a spoon with their other fingers – freeing up the other hand for other activities 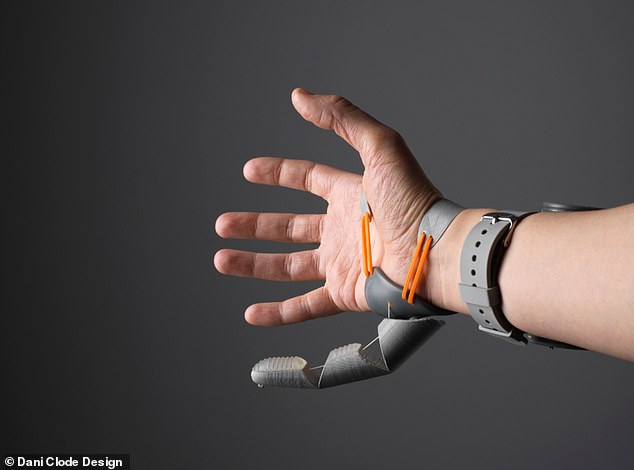 The 3D-printed Third Thumb is worn at the end of their dominant hand next to the little finger, giving the hand symmetry

She was later invited to join Professor Tamar Makin’s team of neuroscientists at UCL who were investigating how the brain can adapt to body augmentation.

‘Our study shows that people can quickly learn to control an augmentation device and use it for their benefit, without overthinking,’ said Clode.

‘We saw that while using the third thumb, people changed their natural hand movements, and they also reported that the robotic thumb felt like part of their own body.’

For the study, 20 participants were trained to use the thumb over five days, during which they were also encouraged to take it home each day after training to use it in daily life scenarios.

Professional musicians were excluded from the study, because they might have a different hand representation to begin with, due to training to play an instrument.

The participants wore the thumb for somewhere between two to six hours per day. 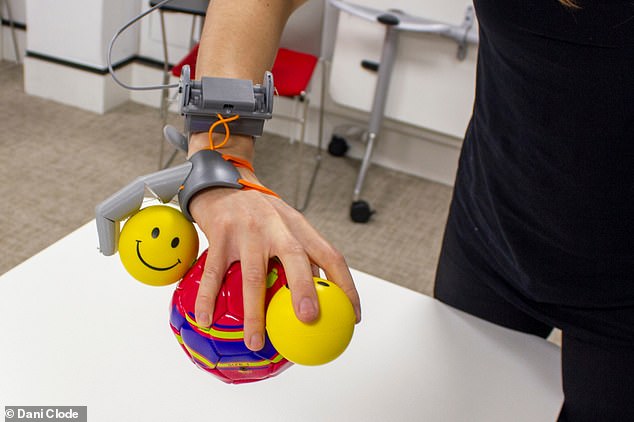 Having a third thumb could also make people a maestro on the guitar, let them hold and open a bottle of soft drink with one hand, or even just carry more objects than usual 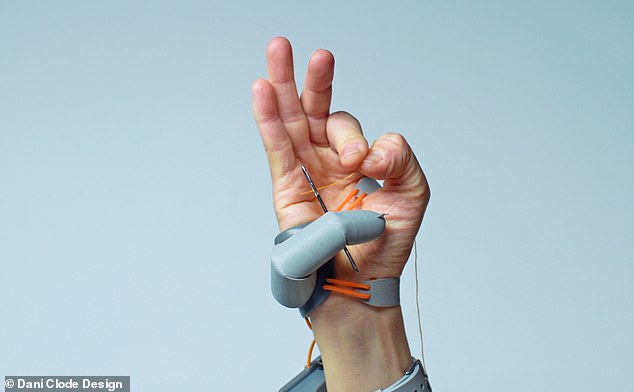 A person supporting a needle with Third Thumb, whilst threading thread through it with their other fingers

They were compared to an additional group of 10 control participants who wore a static version of the thumb while completing the same training.

During daily sessions in the lab, participants were trained to use the thumb during various tasks, including picking up multiple balls or wine glasses with one hand.

Researchers found the participants learned the basics of using the thumb very quickly, but that ‘practice made perfect’.

Participants were even able to use the thumb when distracted – building a wooden block tower while doing a maths problem – or while blindfolded.

Use of the thumb also altered the way the brain represented coordinated joint movements of the natural hand, researchers found in another stage of experiments.

Image of the study training task that involved finger opposition with the Third Thumb in a sequential pattern. Both toe sensors, which are wirelessly connected to the thumb, control different movements by immediately responding to subtle changes in pressure from the toes. One sensor controls for flexion (movements going across the hand), and the other one for adduction (movements up towards the fingers and back down) 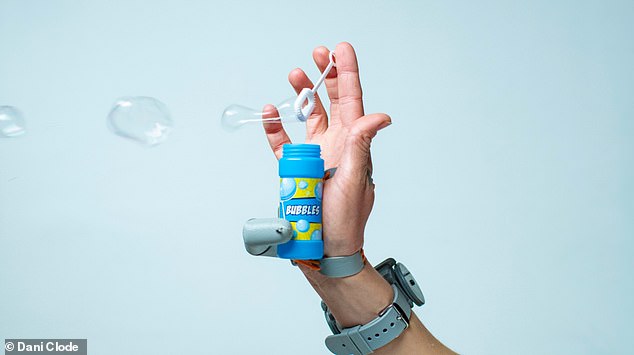 A person supporting a needle with the Third Thumb, whilst threading thread through it with their other fingers

Before and after the training, when the thumb was off, participants had their brains scanned using functional magnetic resonance imaging (fMRI), while the participants were moving their fingers individually.

The researchers found ‘subtle but significant changes’ to how the hand that had been augmented with the thumb (but not the other hand) was represented in the brain’s sensorimotor cortex.

Among the study participants, the brain activity pattern corresponding to each individual finger became less distinct.

A week later, some of the participants were scanned again, and the changes in their brain’s hand area had subsided.

This suggested the observed changes in the brain might not be long-term, although more research is needed to confirm this, according to UCL. 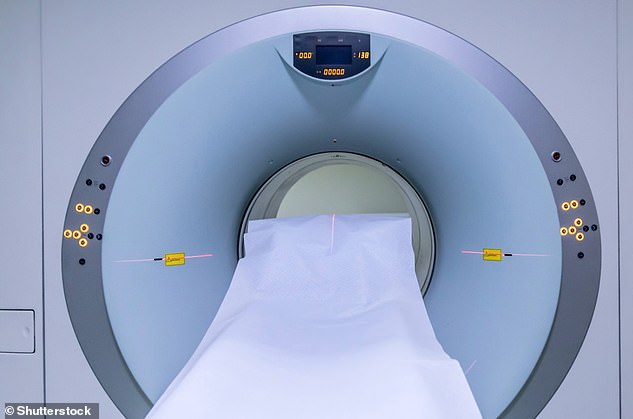 The researchers now aim to explore the effect of augmentative, prosthetic appendages on the minds of children and teenagers.

But if rolled out, the Third Thumb could help adults with missing digits in their daily lives.

‘Body augmentation could one day be valuable to society in numerous ways, such as enabling a surgeon to get by without an assistant, or a factory worker to work more efficiently,’ said Paulina Kieliba, first author of the study, also at UCL.

‘This line of work could revolutionise the concept of prosthetics, and it could help someone who permanently or temporarily can only use one hand, to do everything with that hand.

‘But to get there, we need to continue researching the complicated, interdisciplinary questions of how these devices interact with our brains.’

The study has been published in the journal Science Robotics. 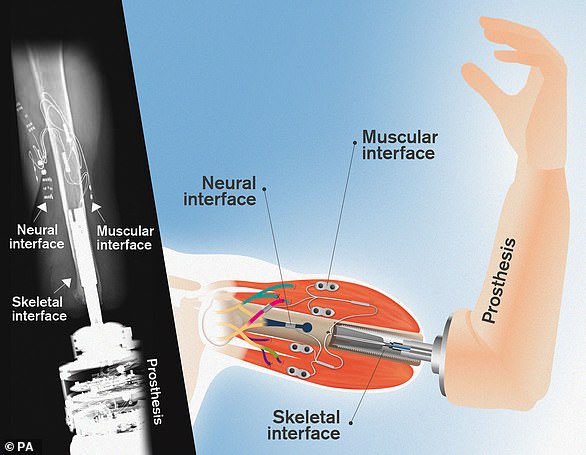 Three people in Sweden use an implant system that allows amputees to use a bionic arm with just their thoughts. Dr Max Ortiz Cataln at Chalmers University of Technology hopes the technology can be expanded to Europe. The implant system anchors the prosthesis to the skeleton in the stump of the amputated limb

Amputees could be able to use bionic arms with nothing but their thoughts within the next two years, Swedish researchers have said.

An implant system that allows the use of a bionic arm without the need for any supporting equipment is already available in Sweden.

Now the team behind it are working toward getting European certification to help more people.

Three Swedes who have had an amputation use the technology, which can connect to any arm prosthesis that is commercially available.

Dr Max Ortiz Catalan, an associate professor at Chalmers University of Technology in Sweden, said that their prosthesis could be a clinically viable replacement for a lost arm.

He told the PA news agency: ‘People in Sweden can have this technology now.

‘We were working to ramp up the production before the pandemic began.

‘We are aiming to have it CE marked soon, within two years, and once it is CE marked, it can be available in Europe as a product.’

Two of the three patients involved in their clinical trial have been using their bionic arms for around three years, while the third participant has been using his artificial limb for seven years.

A new functionality – the sensation of touch – has recently been added to all the three prosthetic arms.

Dr Ortiz Catalan said that the implant system, which anchors the prosthesis to the skeleton in the stump of the amputated limb, is stable and can be used for long periods of time without any intervention from the scientists.

He said: ‘The real breakthrough here is that this neuromusculoskeletal interface, as we call it, allows the artificial limb to be connected to the body.

‘And when you have that intimate connection between the technology and biology, you can have a better control and establish sensory feedback.’