A giant salamander whose species had been misidentified for more than 70 years may be the world’s biggest amphibian.

The animal had lived at London Zoo for 20 years before being preserved in the collections of the Natural History Museum in London.

Experts had believed that the creature was a Chinese giant salamander, a species that is currently critically endangered.

However, a new analysis of salamander DNA has revealed it as a new species that is actually bigger that its Chinese cousin, making it the largest amphibian in the world.

The specimen had been held in the museum’s collection for 74 years before the misidentification was corrected.

The large salamander is presumed to still live in the wild, but is likely also mistaken for Chinese giant salamanders, which together had been thought a single species.

The new species has been named the South China giant salamander.

It can reach nearly 6.5 feet (2 metres) in length — making it the largest of the 8,000 amphibian species that are alive today.

Researchers from the Zoological Society of London and the Natural History Museum used DNA from 17 museum specimens collected in the early 20th century, along with tissue samples from wild salamanders, revealing three genetic lineages.

These were from different river systems and mountain ranges across China, with the team concluding that the species likely diverged more than three million years ago.

‘Our analysis reveals that Chinese giant salamander species diverged between 3.1 and 2.4 million years ago,’ said lead paper author Samuel Turvey of  the Zoological Society of London.

‘These dates correspond to a period of mountain formation in China as the Tibetan Plateau rose rapidly, which could have isolated giant salamander populations and led to the evolution of distinct species in different landscapes,’ he added.

The classification of the South China giant salamander was first proposed in the 1920s, and was based on an unusual salamander from southern China that lived in London Zoo for 20 years.

The idea was abandoned at the time, but has now been resurrected and confirmed by Professor Turvey and his colleagues. 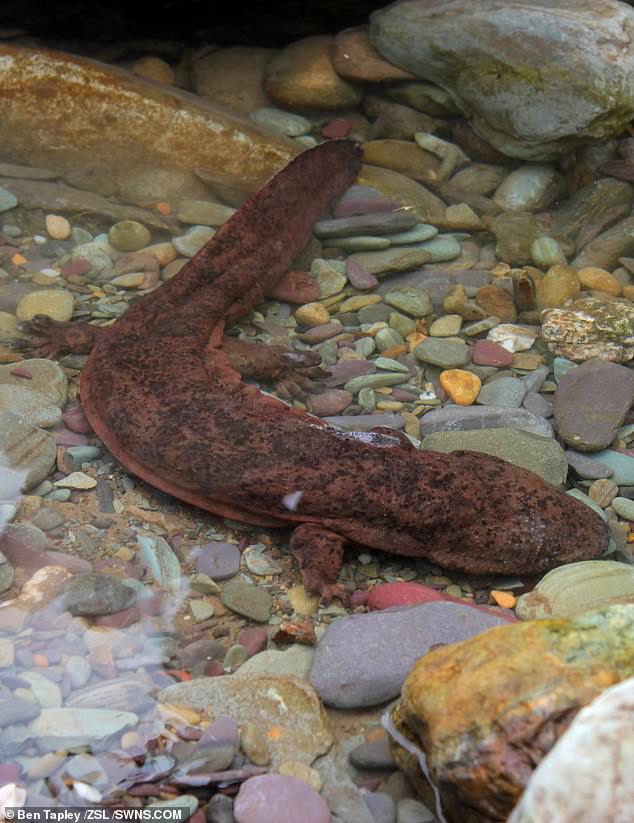 The animal from the new species had lived at London Zoo for 20 years before being preserved at the Natural History Museum in London. Pictured, a wild Chinese giant salamander 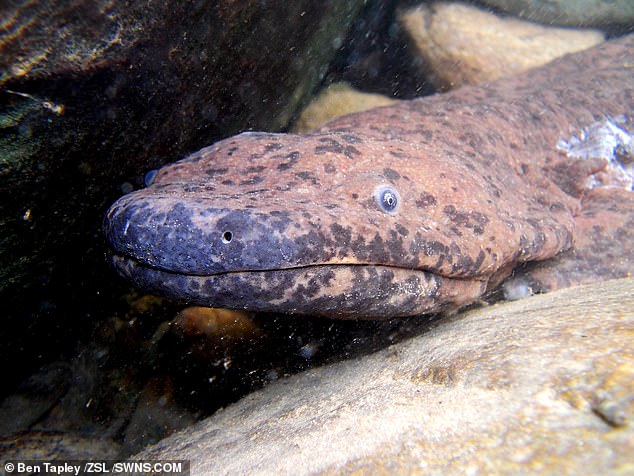 Experts had believed that the creature was a Chinese giant salamander, pictured, a species that is currently critically endangered

Researchers used the exact same individual animal — which had been preserved and kept as a specimen in the Natural History Museum for the last 74 years — to define the characteristics of the new species.

The third and unnamed new species, which lives in the Yellow Mountains of eastern China, is still only known from tissue samples and has yet to be formally described.

‘The decline in wild Chinese giant salamander numbers has been catastrophic, [and] mainly due to recent overexploitation for food,’ said Professor Turvey.

‘We hope that this new understanding of their species diversity has arrived in time to support their successful conservation.’

‘But urgent measures are required to protect any viable giant salamander populations that might remain.’ 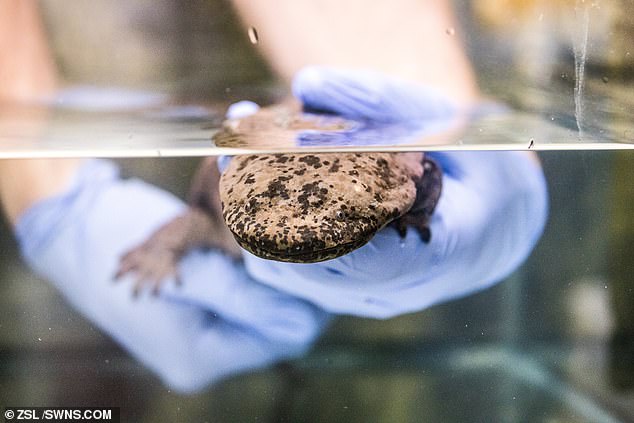 However, a new analysis of salamander DNA has revealed the new species, which is actually bigger that its Chinese cousin, pictured making it the largest amphibian in the world

‘Salamanders are currently moved widely around China, for conservation translocation and to stock farms that cater for China’s luxury food market,’ he added.

‘Conservation plans must now be updated to recognise the existence of multiple giant salamander species, and movement of these animals should be prohibited to reduce the risk of disease transfer, competition, and genetic hybridisation.’

Researchers said that the study highlights how museum collections can play an essential role in the conservation of critically endangered species.

‘These findings come at a time where urgent interventions are required to save Chinese giant salamanders in the wild,’ said conservation geneticist Melissa Marr, of the Natural History Museum London.

‘Our results indicate that tailored conservation measures should be put in place that preserve the genetic integrity of each distinct species.’

The full findings of the study were published in the journal Ecology and Evolution.

WHAT IS THE CHINESE GIANT SALAMANDER?

The Chinese giant salamander is the world’s largest amphibian and can grow up to six feet (1.8 metres) in length.

It has been described as a ‘living fossil’ as its appearance has barely changed since the Jurassic period.

Although it is one of the world’s oldest species – dating back more than 170 million years – there are few surviving populations of giant salamander left in the wild. 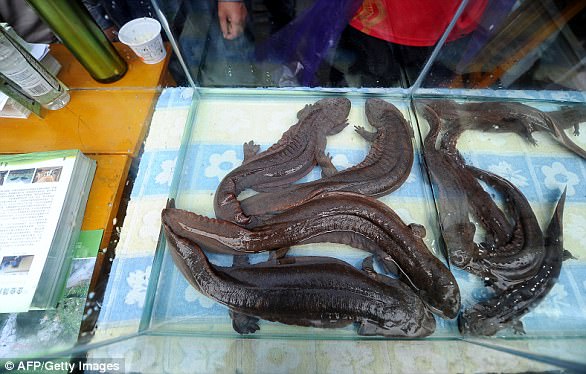 The giant salamander is listed as ‘critically endangered’ on the International Union for Conservation of Nature Red List and a protected species in China.

Despite its status as an endangered species, it is still regarded a delicacy among China’s super rich. 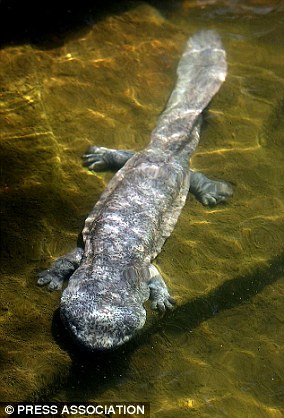 The salamander population has declined drastically over the last 30 years due to poaching and destruction of its habitat.

In 2015, Chinese officials were investigated for reportedly eating a giant salamander at a luxury banquet in Shenzhen.

A government crackdown means that anyone found to be eating endangered species could receive a jail sentence of up to ten years.

It is believed by some that the salamander has anti-ageing benefits, although there is no scientific evidence to support this.

The giant salamander holds a treasured place in Chinese mythology and is called ‘wa wa yu’ – or ‘baby fish’ – in Chinese because its distress call sounds like the cry of a baby.

In the past the amphibian could grow to more than 6 feet (1.8 metres) in length and over 50 kilograms (110lbs) in weight, but due to wild harvesting most salamanders today are much smaller.