A seal pup tries to defend its mother and attacks the conservationists’s net as they try to catch her and free her from a fishing line.

Footage shows the pup try to bite the net as the mother runs away from the conservationists, who are working for the non-profit organisation Ocean Conservation Namibia (OCN).

The herd of seals run away from the conservationists and try to dodge the net if it comes near them.

The mother thrashes her head back and forth in an attempt to avoid capture as her pup tries to scare the workers.

Conservationists Naude Dreyer and Antoine catch the seal with their net while the pup stays close by to protect its mother.

The mother has a piece of white nylon string wrapped around her neck and the OCN staff have to work carefully to cut the string safely from around her neck.

The brave pup stays to watch the entire rescue mission, refusing to abandon its mother and go with the rest of the herd. 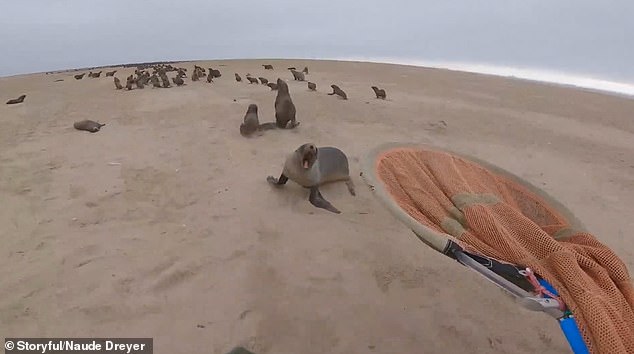 Immediately after the rescue, the seal is released and the mother and baby run off to freedom together.

Naude created OCN in Walvis Bay, a non-governmental organisation working to end the entanglement of marine wildlife along the Namibian coast.

Naude, who started rescuing seals on his own more than five years ago, leads their international team of six dedicated activists.

Ocean rubbish and plastic pollution in the sea causes seals to become injured after getting caught in the objects when swimming.