Alec Baldwin returned to Twitter today only to DENY that he requested a larger Colt gun before the fatal shooting of Halyna Hutchins on the set of Rust after Sante Fe sheriffs in New Mexico issued a search warrant for his iPhone.

The 63-year-old actor tweeted for the first time since he and his wife, Hilaria, 37, deleted their accounts on December 6.

Referring to an article from Newsweek on his alleged request for a larger gun before the incident, Baldwin wrote: ‘This, in fact is a lie.’

‘The choices regarding any props by me for the film RUST were made weeks before production began. To suggest that any changes were made “before fatal shooting” is false,’ he added.

His tweet came after police in New Mexico have issued a search warrant for his iPhone, following the fatal October 21 shooting.

The search warrant, requested by Santa Fe sheriffs, authorizes police to review all text messages and photos on the actor’s iPhone, as well as any stored location data, as part of their investigation.

‘Affiant requested Alec’s phone from him, as well as his attorney, and was instructed to acquire a warrant,’ the warrant request states.

Hancock, in the request for the warrant, spelt out in detail what she wanted to obtain from Baldwin’s phone – a list that included his contacts, call records, photos, videos, and text messages.

Alec Baldwin is seen on October 21, after speaking to investigators about the fatal shooting of Halyna Hutchins. Baldwin’s phone is now being sought by the team probing Hutchins’s death 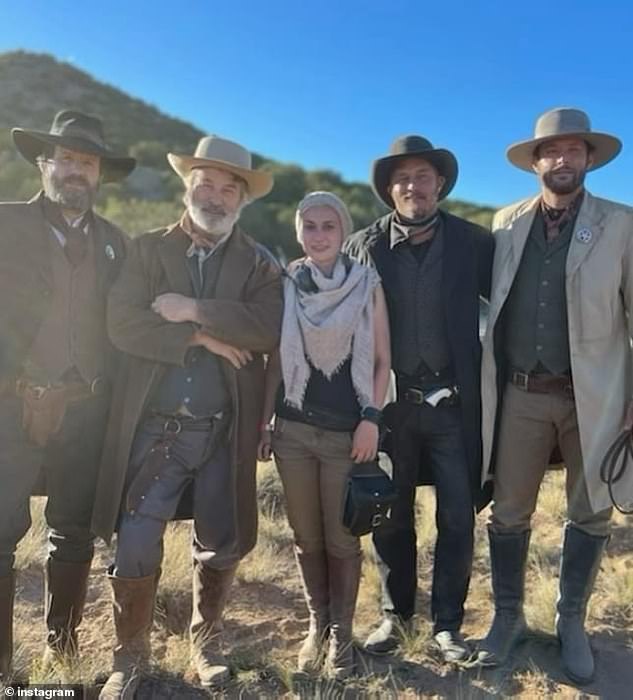 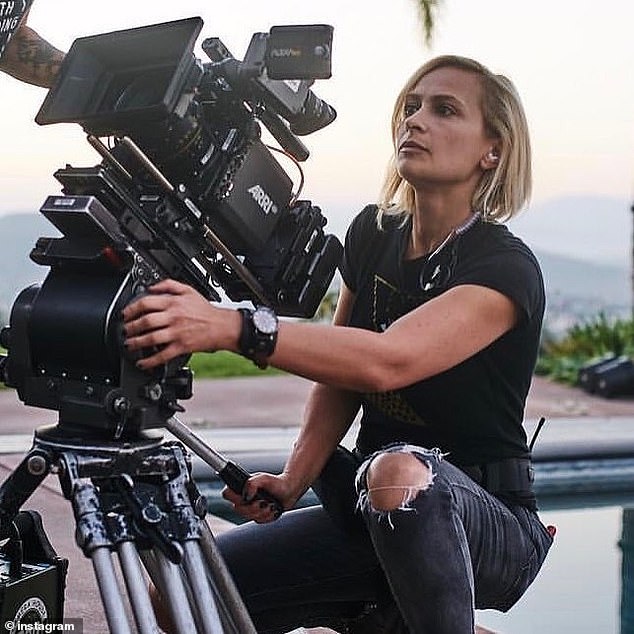 Halyna Hutchins was described by Baldwin as ‘fantastic’, as he paid tribute to her vision and professionalism 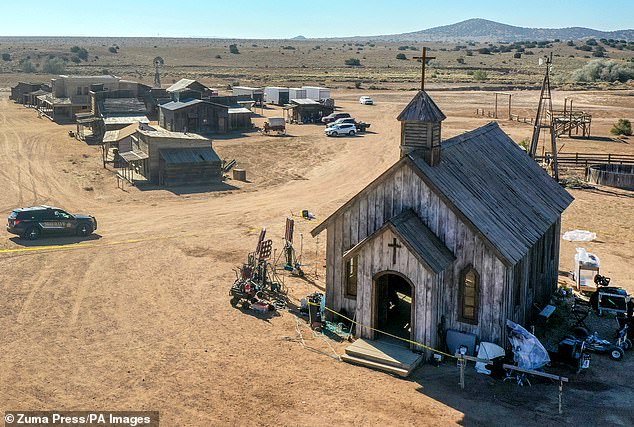 The set of Rust, at the Bonanza Creek Ranch outside of Santa Fe

‘Affiant is requesting a warrant for the seizure and search of Alec Baldwins’ cell phone to search for any evidence relating to the death investigation of Halyna Hutchins,’ the warrant request states.

‘Affiant believes there may be evidence on the phone, due to individuals using cellular phones during and/or after the commission of crime(s).

‘Such information, if it exists, may be material and relevant to this investigation.

‘Affiant was also made aware there were several emails and text messages sent and received regarding the movie production ‘Rust’ in the course of interviews.’ 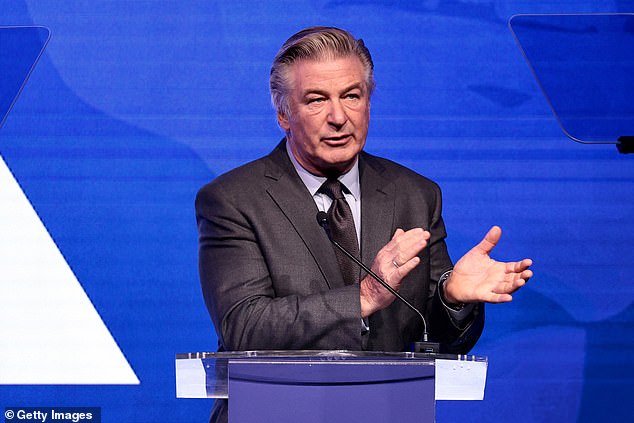 Baldwin is seen on December 9, at the RFK Ripple of Hope gala in Manhattan 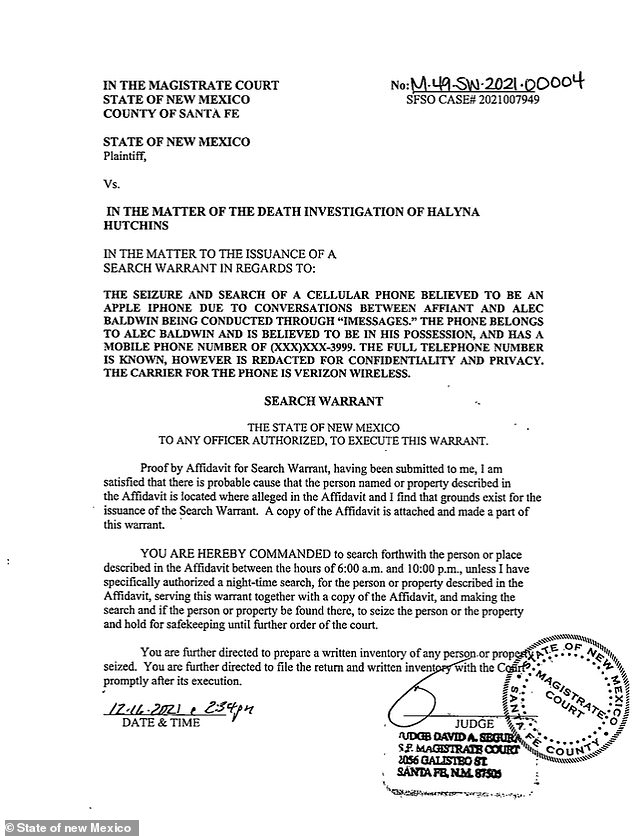 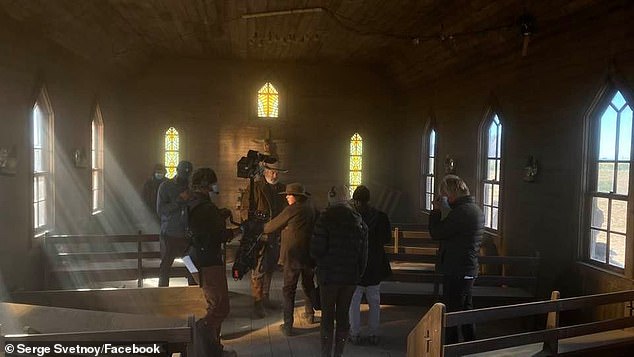 According to the search warrant, Baldwin told police that he exchanged emails with the film’s armorer, Hannah Gutierrez Reed, regarding what style of gun to use in the film.

They ultimately decided on a Colt .45 pistol.

Baldwin, 63, had been handed the antique pistol for the scene, and was told that it was ‘cold’ – not loaded.

He was rehearsing a scene in which he pulls out his gun and, in an interview with ABC on December 2, said that he never pulled the trigger, but the gun went off anyway.

Hutchins, a 42-year-old cinematographer, was shot and killed. The director of the film, Joel Souza, was shot in the shoulder and survived.

It is unclear why it has taken so long for New Mexico police to seize Baldwin’s phone.

The actor has insisted that he has fully cooperated with the investigation.

Baldwin on December 2 gave an emotional interview to ABC’s George Stephanopoulos, in which he said he did not pull the trigger, and felt no guilt because he believed he had done nothing wrong.

‘I let go of the hammer, bang. The gun goes off. Everyone is horrified. They’re shocked. It’s loud,’ he said.

Following the interview, New York Post’s Jon Levine attempted to quiz the actor about the claim.

Baldwin refused to engage, and his wife, Hilaria Baldwin, repeatedly asked the journalist to leave and ‘please go away,’ and trained her cellphone camera on him.

Levine met the couple as they were leaving Woody Allen’s townhouse, on the Upper East Side of Manhattan. 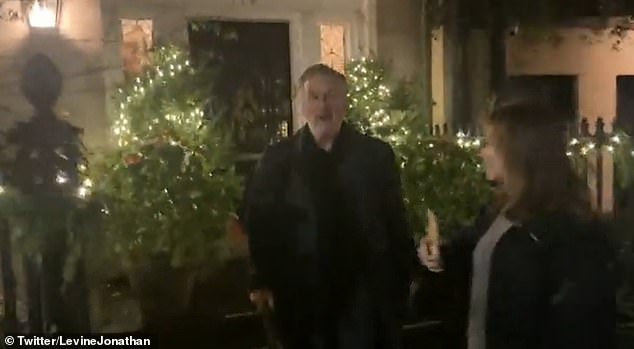 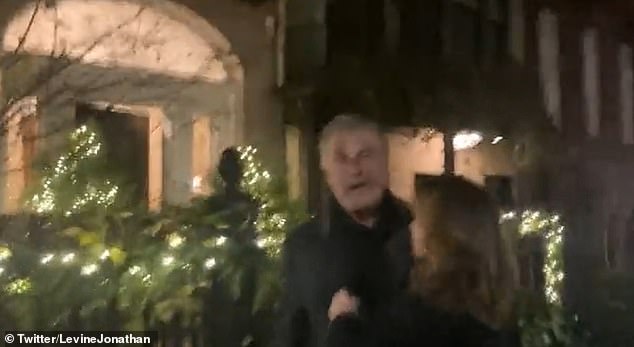 The confrontation took place outside Woody Allen’s Upper East Side home, where reporter Jon Levine was waiting for Baldwin to quiz him about the shooting on the set of Rust

When Levine would not stop asking questions about the shooting, Alec charged at him while grasping his umbrella and yelling that he was not allowed to be on someone’s private property.

He did not make contact with the reporter, who pointed out to him that the sidewalk was, in fact, public property.

Baldwin has spoken of his devastation at Hutchins’s death, and paid tribute to her as a wonderful cinematographer and a great person.

He told Stephanopoulos that he didn’t know she’d died until hours later, at the end of his police interview when he was photographed in the sheriff’s parking lot in Santa Fe.

He said that he has been told by people ‘in the know’ that it is ‘highly unlikely’ he’ll face criminal charges.

‘Someone is responsible for what happened, and I can’t say who it is, but it’s not me,’ Baldwin told Stephanopoulos.

‘Honest to God, if I thought I was responsible I might have killed myself. And I don’t say that lightly.’

He also took a swipe at former President Donald Trump, his media foe who he impersonated on Saturday Night Live, for suggesting that he ‘loaded the gun himself.’

‘He said that I did it deliberately. Just when you think things can’t get any more surreal, here’s the president of the United States making a comment on this tragic situation.’ 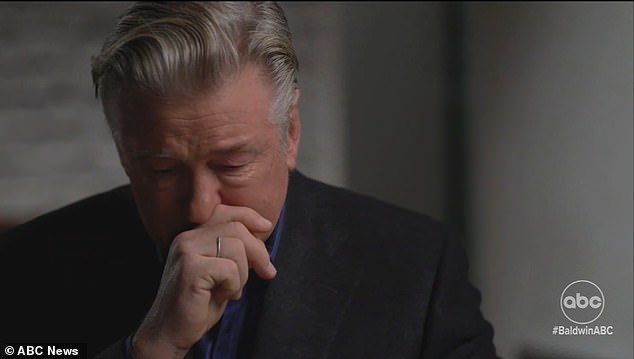 Alec Baldwin, 63, spoke to George Stephanopoulos for an interview which aired on December 2

Baldwin, after the interview aired, posted to Instagram a photo of him cradling one of his six young children.

‘No matter what happens to me. No matter what I suffer. If I win or lose, anything. Anything. No one can take away from me the joy and love you have given me, @hilariabaldwin,’ he wrote.

‘These are tough times. The world is choked with fumes of hate. But you have given me a reason to live. Our life with our family is all I care about. Nothing else. I owe that to you.’

Baldwin described in detail for the first time the immediate aftermath of the accident on October 21. He was filming a scene inside a church on the set of the movie when the gun was handed to him.

‘She’s getting me to position the gun – everything is at her direction. I draw the gun, to her marker. I’m not shooting to the camera lens, I’m shooting just off. In her direction. This was a completely incidental shot, that may not have ended up in the film.’

Baldwin says he cocked the gun, and was discussing with Hutchins how it looked on camera.

‘I let go of the hammer, bang. The gun goes off. Everyone is horrified. They’re shocked. It’s loud. They don’t have their earplugs in. 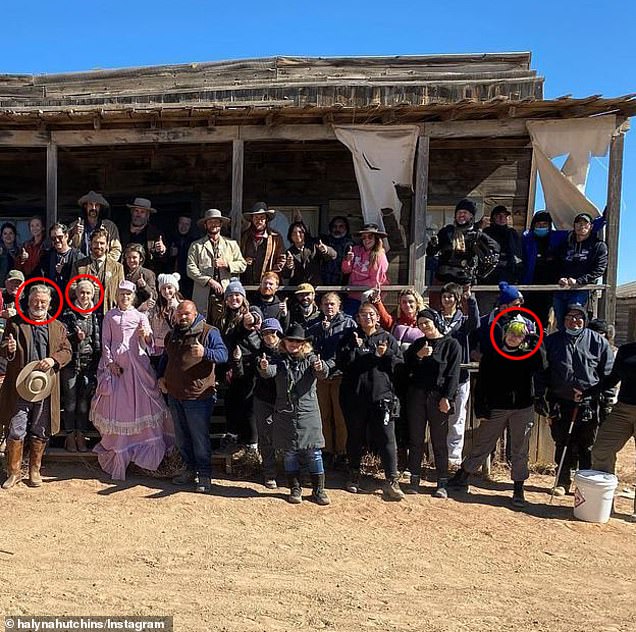 Hutchins’ October 19, 2021 Instagram post showed cast members and staffers, including Baldwin alongside Hutchins herself and armorer Gutierrez-Reed (circled left to right) on the set of Rust in Santa Fe, New Mexico

‘I let go of the hammer, bang. The gun goes off. Everyone is horrified. They’re shocked. It’s loud. They don’t have their earplugs in.

‘No one was – the gun was supposed to be empty. I was told I was handed an empty gun.

‘If they were cosmetic rounds, nothing with a charge at all, a flash round, nothing.

‘She goes down, I thought to myself, ‘Did she faint?’

‘The notion that there was a live round in that gun did not dawn on me ’till probably 45 minutes to an hour later.’

He added: ‘Well, she’s laying there and I go, ‘Did she hit by wadding? Was there a blank?’

‘I never pulled the trigger. No, no, no. You would never do that.

‘The gun was supposed to be empty. I was told I was handed an empty gun.

‘Nobody gave a f*** who you are any more until this. You see a lot of people with their phones now, in a coffee shop,’ he said, showing them filming him.

‘No one was – the gun was supposed to be empty. I was told I was handed an empty gun. If they were cosmetic rounds, nothing with a charge at all, a flash round, nothing.

‘She goes down, I thought to myself, “Did she faint?” The notion that there was a live round in that gun did not dawn on me ’till probably 45 minutes to an hour later.’

He added: ‘Well, she’s laying there and I go, “Did she hit by wadding? Was there a blank?” Sometimes those blank rounds have a wadding inside that packs, it’s like a cloth that packs the gunpowder in. Sometimes wadding comes out, it can hit people, and it could feel like a little bit of a poke.

‘But no one could understand. Did she have a heart attack? Because remember the idea that someone put a live bullet in the gun was not even in reality.”

‘I never pulled the trigger. No, no, no. You would never do that.’

Dave Halls, the assistant director who was watching, confirmed Baldwin’s account, through his lawyer.

He said he stood over her for ‘about 60 seconds’ and was then ushered out. Was she conscious?’ Stephanopoulos asked. ‘My recollection is yes,’ said Baldwin.

He said ‘no one had any idea’ there was live ammunition used until a police officer showed a photo of the shrapnel removed from Souza’s arm.

He said then began ‘the agony, insanity, that someone put a live bullet in the gun. She was laying there and she was there for a while I was amazed at how long they didn’t get her in a car or get her out, but they waited until a helicopter came,’ he said.

‘And by the time the helicopter took off with her we were literally all glutted to that process outside.

‘When she finally left, I don’t know how long she was there for. She kept saying, she’s stable, just as you disbelieve there was a live round in the gun, you disbelieve its going to be a fatal accident.

‘At the end of my interview with the sheriff’s department, they told me ‘we regret to inform you she didn’t make it,’ they told me then and there.’

He added: ‘That’s when I went outside and called my wife.’ 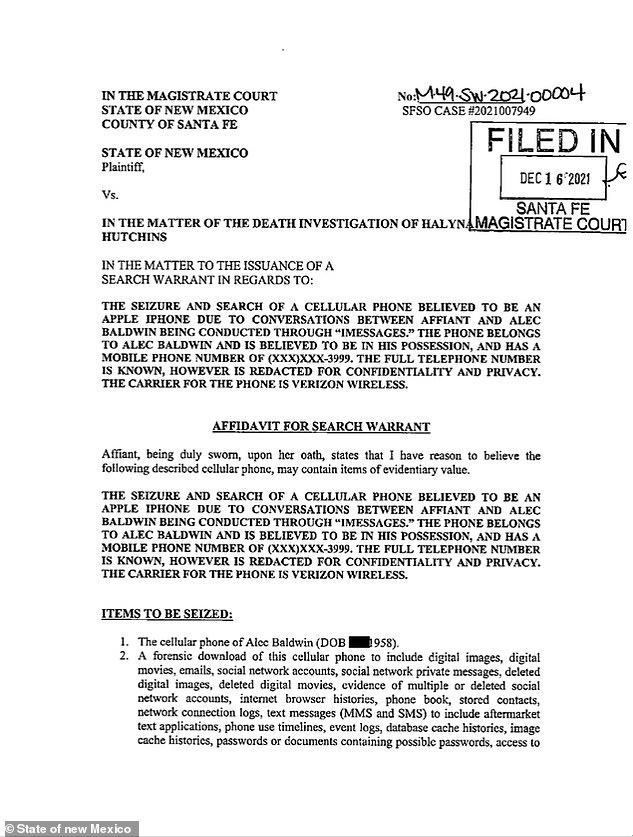 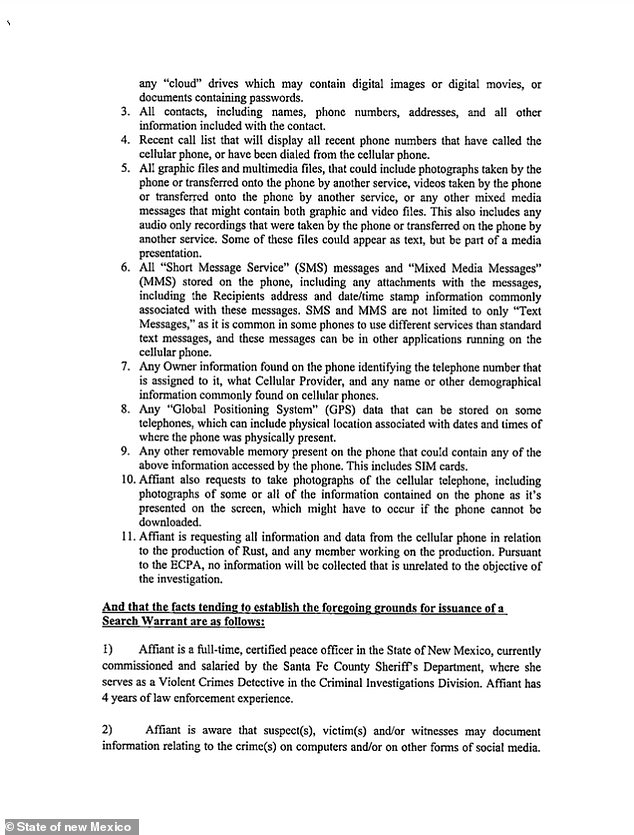 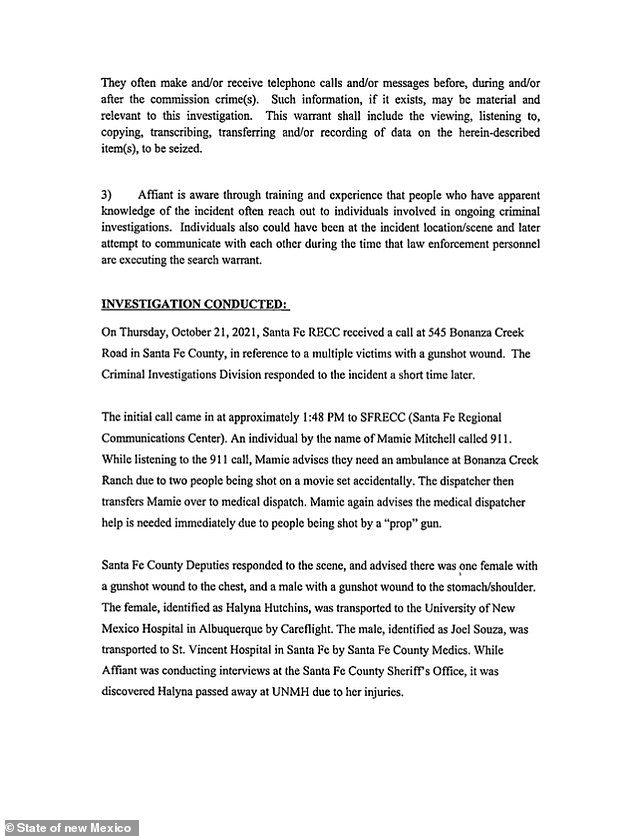 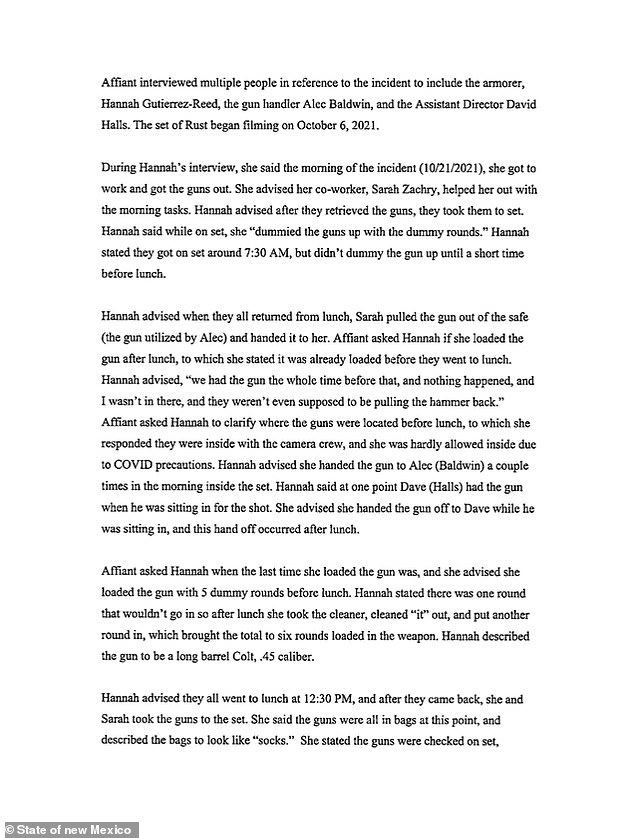 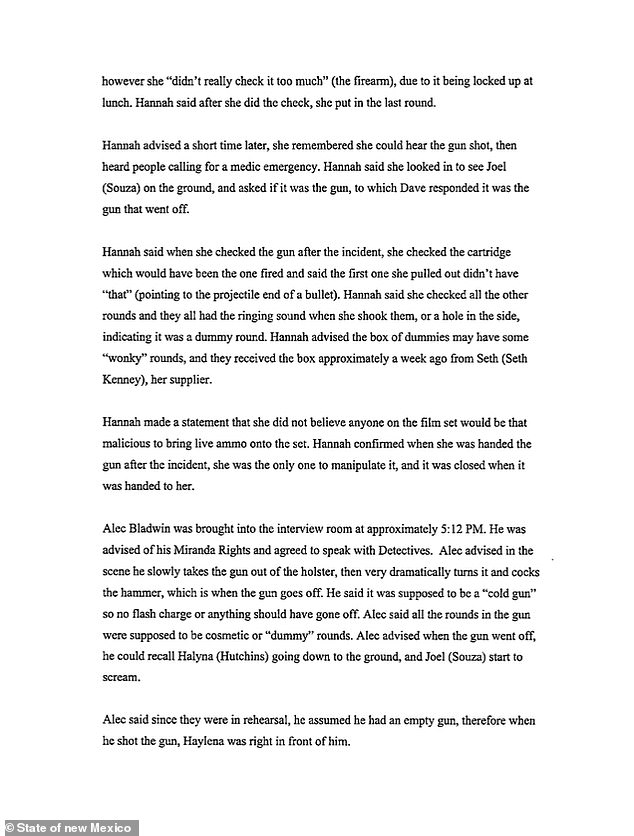 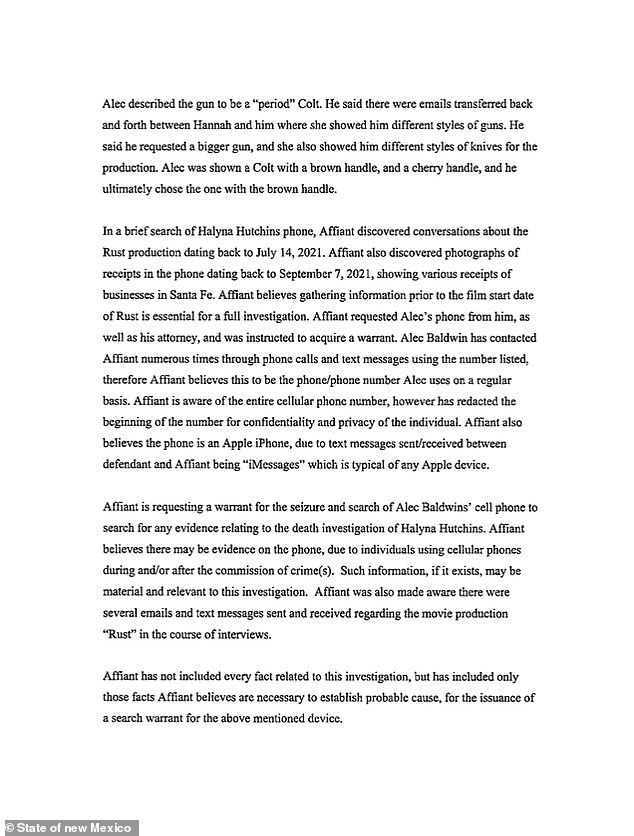 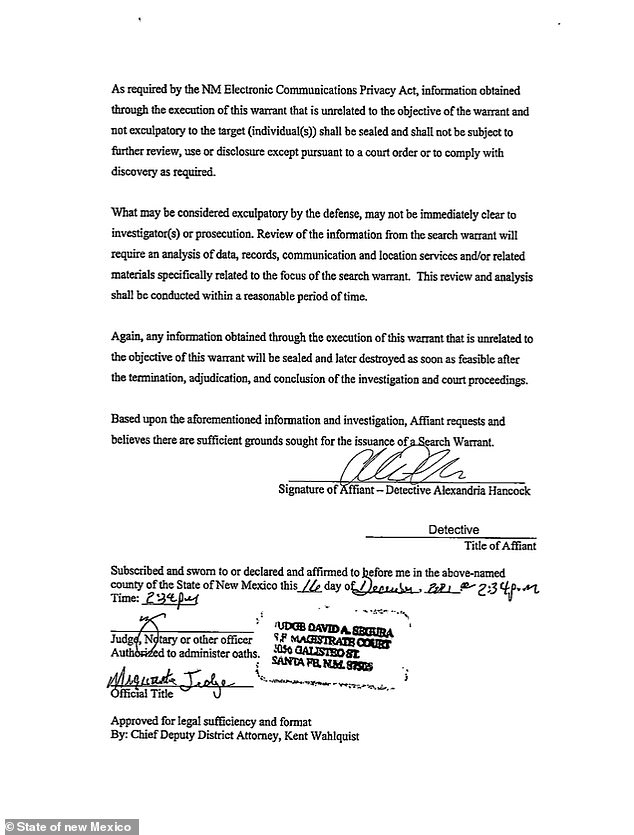