Tempers flared in the Rose Garden of the White House on Thursday as an outspoken Playboy magazine writer nearly came to blows with conservative activist and former Donald Trump aide Sebastian Gorka.

The encounter happened in full view of more than 100 right-wing social media stars who were at the White House for a ‘summit’ focused on grievances against Twitter and Facebook.

Playboy’s Brian Karem, who doubles as a CNN political analyst, started the melee by telling the conservatives that they were ‘a group of people that are eager for demonic possession.’

‘You are a journalist, right?’ Gorka shouted from across the lawn.

Taunt: Brian Karem, a CNN analyst and Playboy’s White House correspondent, taunted conservatives and shouted at Sebastian Gorka in the Rose Garden after Trump admitted defeat on his bid to use the Census to ask about citizenship 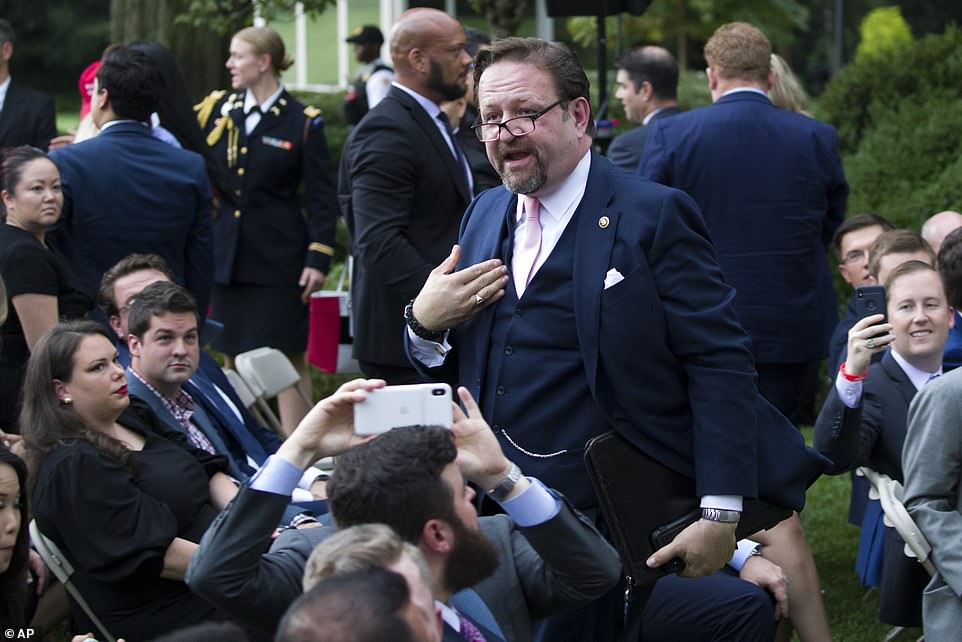 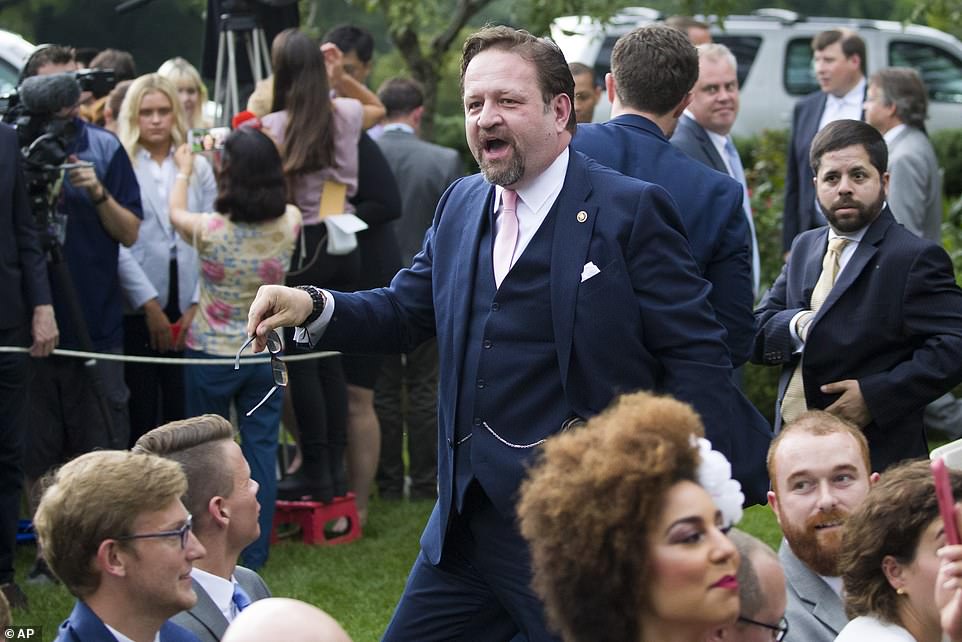 Getting angrier: Gorka, who now hosts a radio show, moved towards Karem through the Rose Garden which the president ha just left 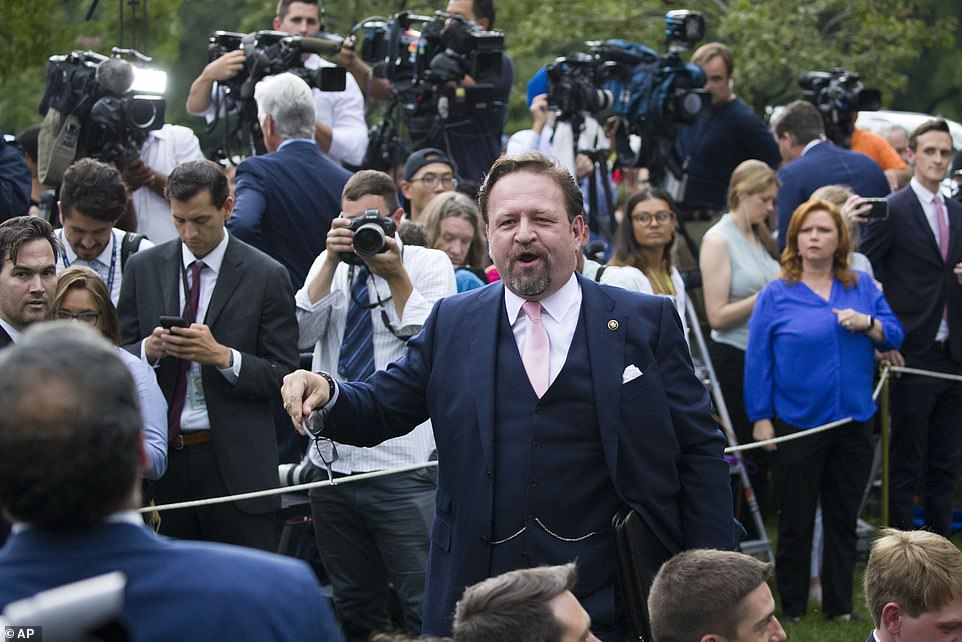 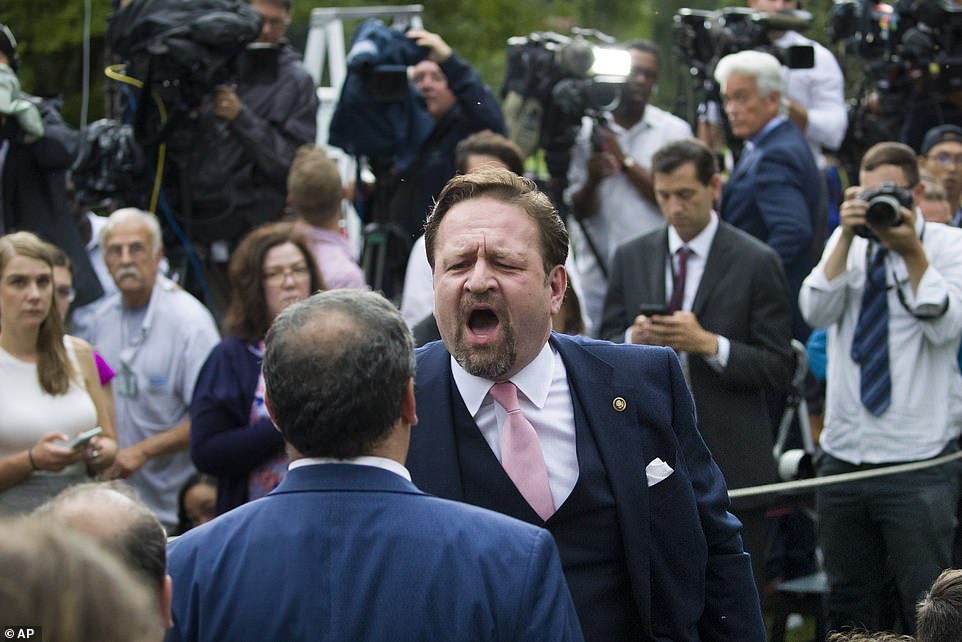 Shouting: Gorka screamed ‘you’re not a journalist, you’re a punk.’ Among those who saw it unfold were John Roberts, Fox News White House Correspondent (second right) 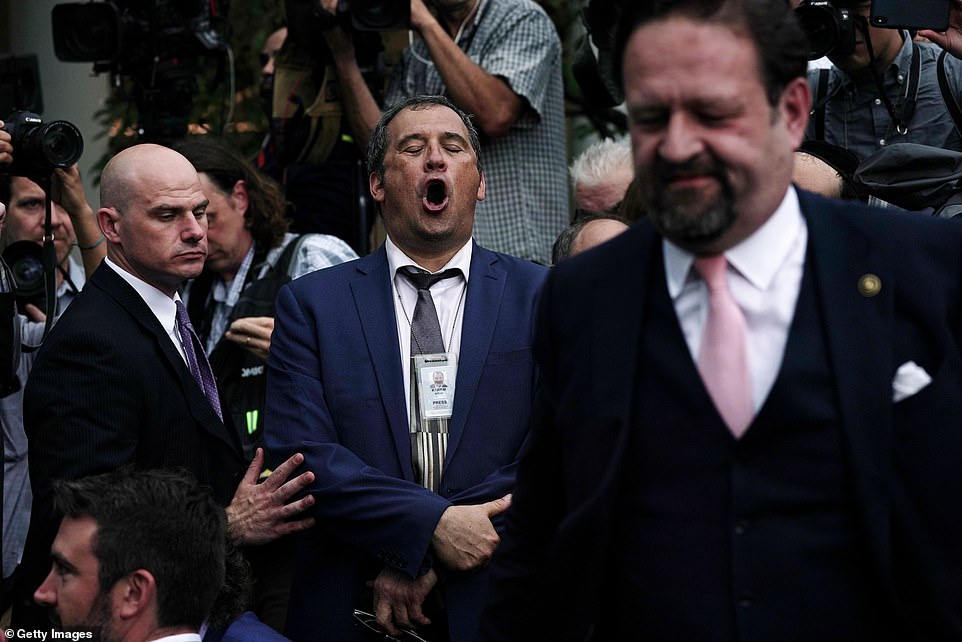 Secret Service move in: An agent restrained Karem as Gorka turned on his heel and walked off, to chants of ‘Gorka! Gorka! Gorka!’ from conservative activists 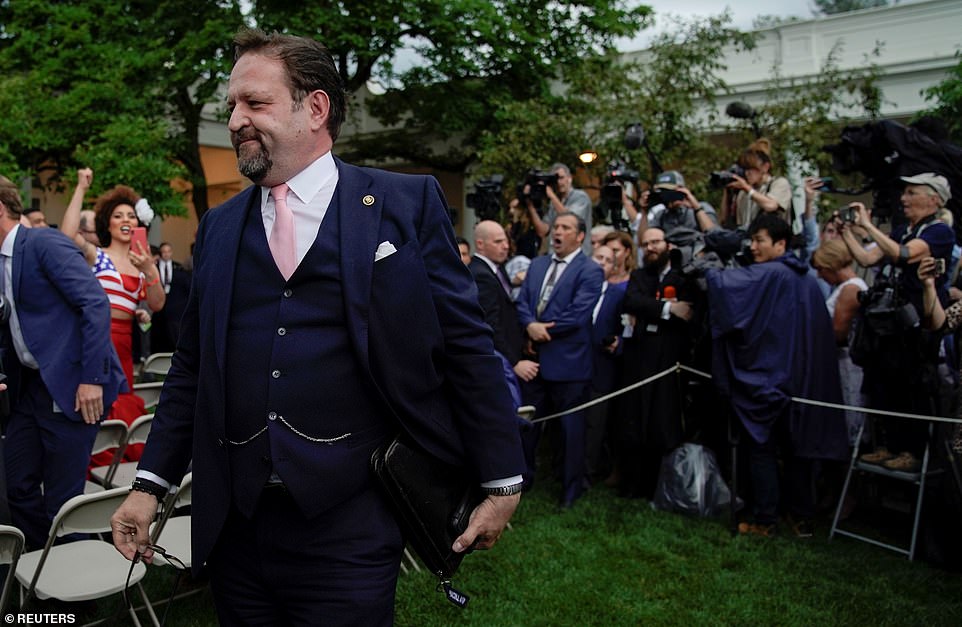 Out of here: Gorka stormed off as the Secret Service agent held back Brian Karem, who was behind a ropeline used to keep reporters from the main seating area

WHO WAS AT TRUMP’S SOCIAL MEDIA SUMMIT

Ali Alexander: Blogger who tweeted about Kamala Harris ‘She’s not an American Black. Period.’ which was retweeted then deleted by Don Jr.

Allen Estrin: Founder of Prager University which is not an academic institution; it produces conservative videos

Will Chamberlain: Publisher of Human Events

‘Come on over here and talk to me, brother,’ Karem responded. ‘We can go outside and have a long conversation.’

Gorka baited him, announcing as reporters looked on that Karen was ‘threatening me now in the White House! You’re threatening me in the Rose Garden.’

Gorka – who has said he was once a part-time British soldier – steamed across the Rose Garden.

‘You throw children in cages! You’re a parent! You’re a parent of young children!’ he yelled, in footage that rocketed around the world. ‘Don’t you have any empathy for what they go through?’

On Thursday Karem appeared ready to explode again until a Secret Service agent intercepted him.

Another activist jawed at Karem minutes later, saying he had ‘threatened Gorka just a minute ago. You told him to go outside.’

‘Everybody knows what that means,’ the man shot back. It’s an embarrassment.’

‘Yes you are,’ Karem countered.

Trump has turned taunting reporters into a contact sport, decrying journalists as purveyors of ‘fake news.’

The limited portion of Thursday’s social media summit that was open to reporters included complaints that conservatives are purposely silenced on the larger digital platforms, giving mainstream reporters more room to run unchallenged.

‘We’re citizen journalists,’ she said. ‘We respect you guys but you’ve got to stop reporting fake news.’

‘Let us have our voice! We have an unbiased opinion,’ she told Karem, who lectured her about ‘legitimate journalism.’

‘Verify your facts, and then you can call yourself a reporter,’ he said.

The near-brawl came after the conservative activists had first met for a summit on social media then been invited by Trump to watch his Rose Garden statement admitting defeat in his attempt to ask about citizenship status in the 2020 Census.

He had railed against social media in a freewheeling speech accusing Silicon Valley giants of suppressing right-of-center views.

Ironically, Twitter went out worldwide on Thursday as attendees gathered for the social media summit in the White House East Room – but came back up before remarks in which he accused the tech brand of making it intentionally difficult for people to follow him.

The summit was billed as an attempt to promote transparency and fairness. White House reporters were thrown out and the live stream cut when Trump started to take questions.

In a free-wheeling speech akin to his performances at campaign rallies, Trump praised conservative social media figures for ‘the c**p you come up with,’ got applause for calling the mainstream media ‘fake news,’ and bemoaned his own apparent difficulties with Twitter.

He invited bloggers Diamond and Silk up on stage to speak, hailed the work of Project Veritas director James O’Keefe who has caught Google executives on undercover camera appearing to confirm claims of anti-conservative bias – something disputed by Google – and was starting to take a question from a former adviser turned broadcaster Sebastian Gorka when the livestream was cut. 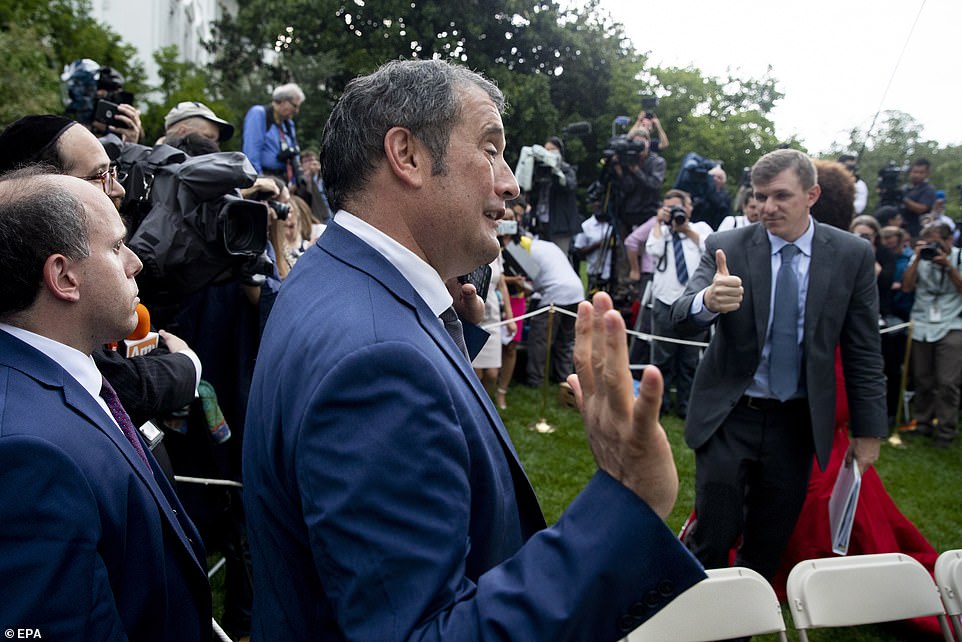 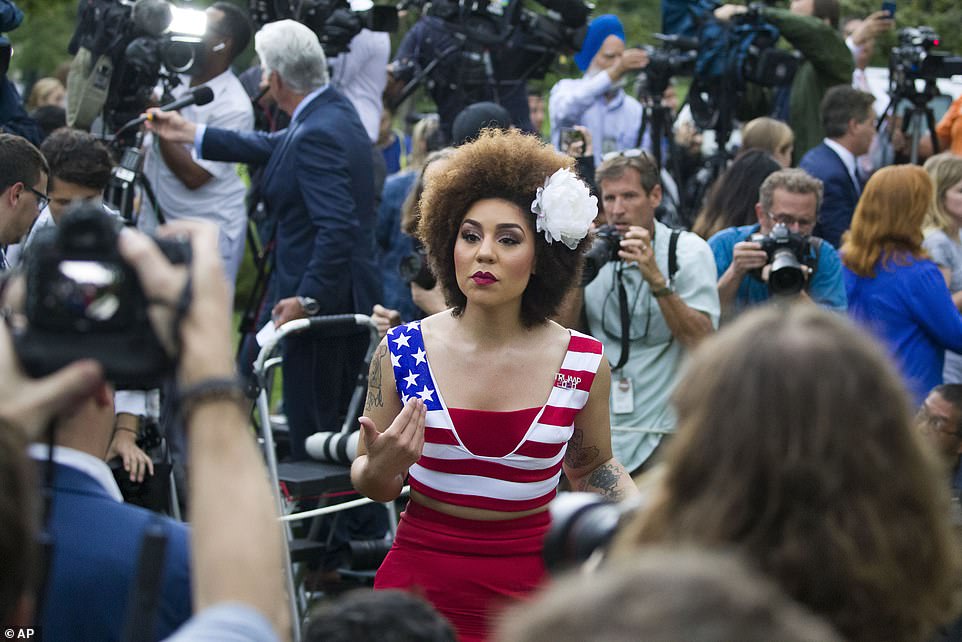 Next up: Also speaking to Karem was Joy Villa, a bondage model turned singer-songwriter who wears pro-Trump dresses on red carpets 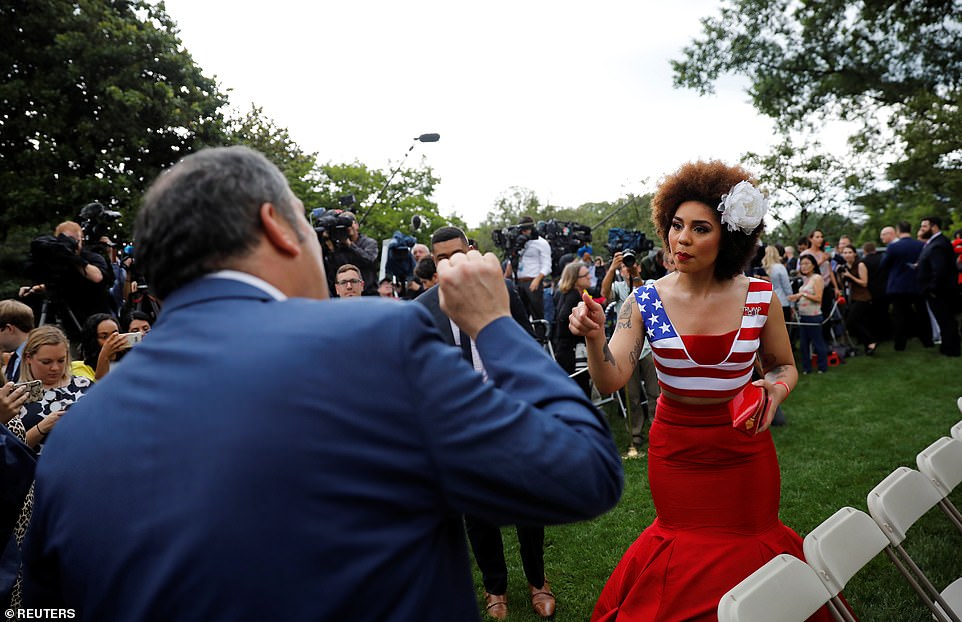 Stand-off: Joy Villa, a singer and conservative activist and Scientologist, argued with Karem about who was a real journalist after his confrontation with Gorka 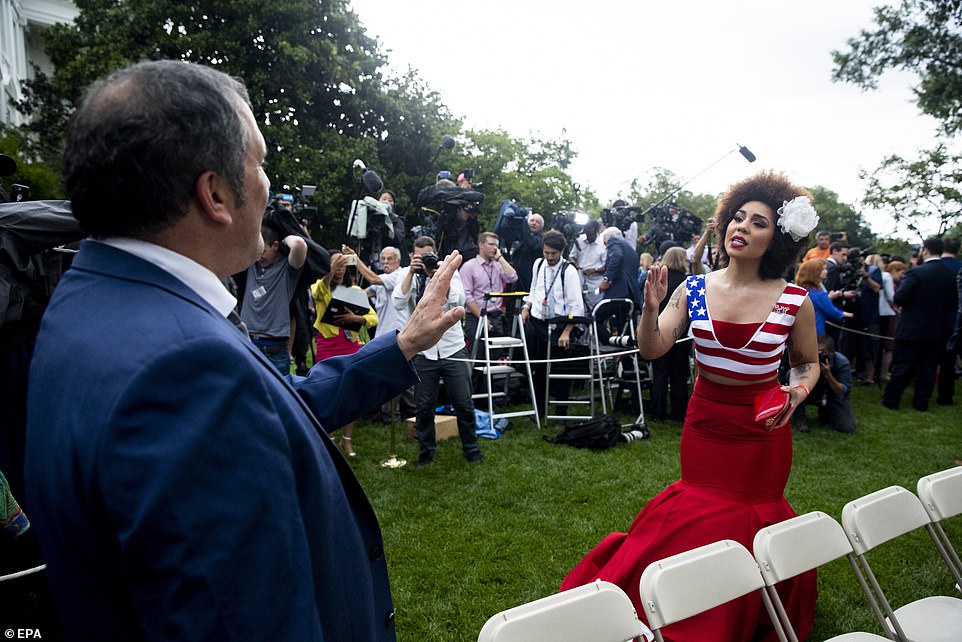 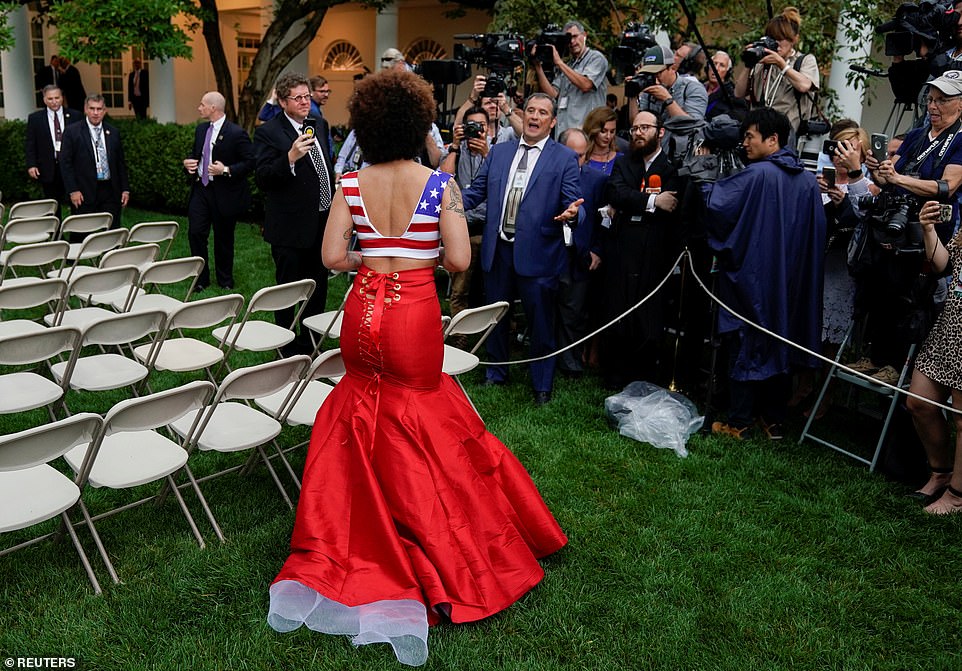 Center of attention: Brian Karem and Joy Villa argued in the Rose Garden 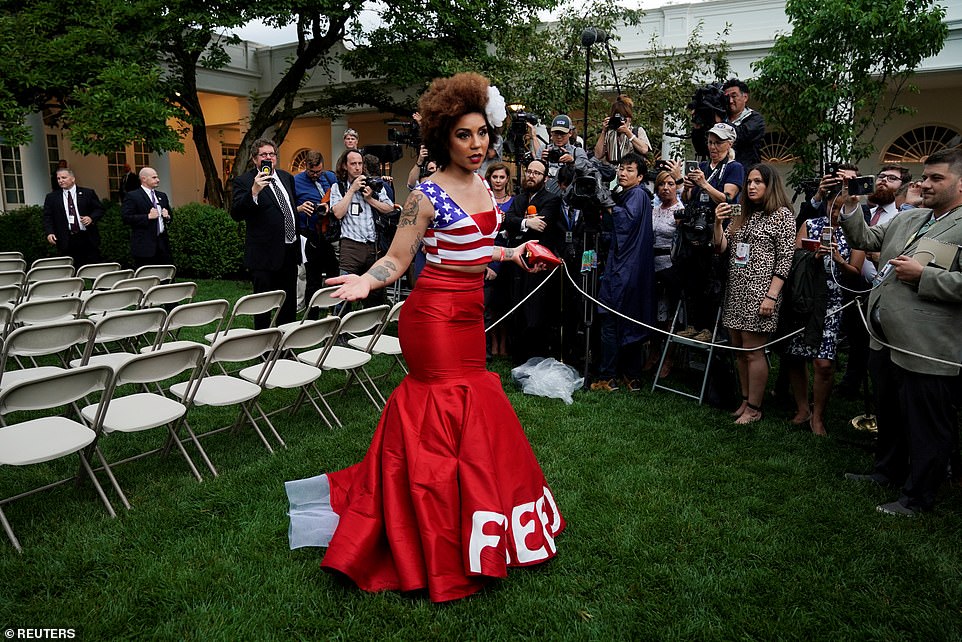 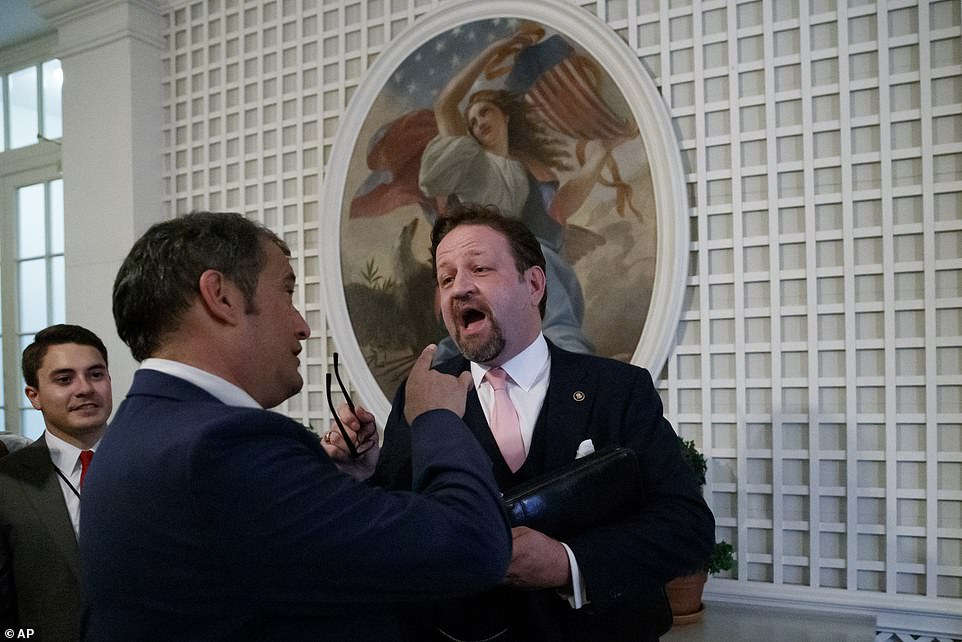 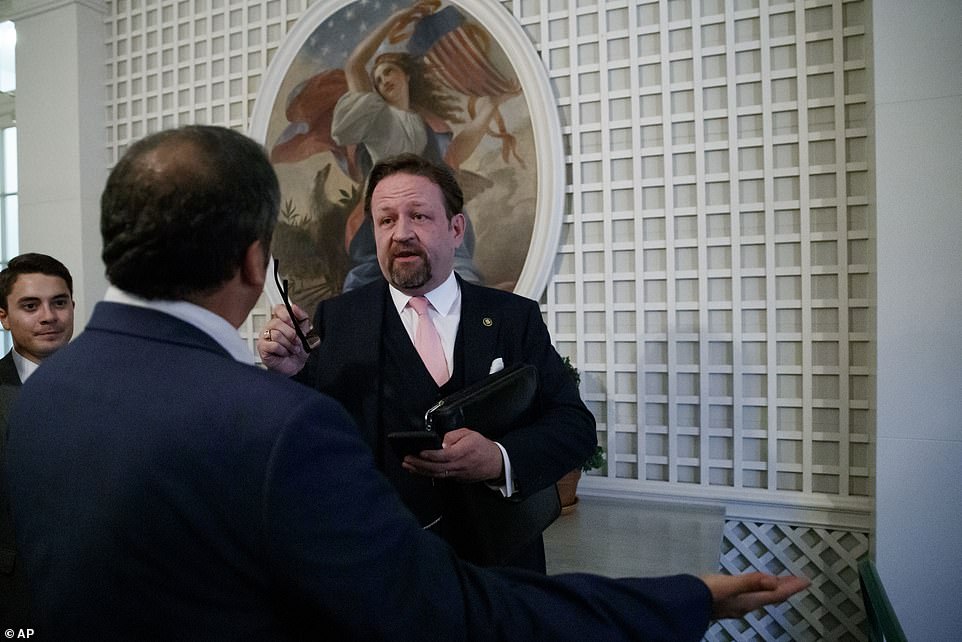 In the course of the speech he claimed to be a victim of censorship himself.

‘I lot of bad things are happening. I have people, they come up to me: “Sir, we want to follow you. They won’t let us on,”‘ he claimed.

‘And it was so different than it was, even six, seven months ago. I was picking up unbelievable amounts of people, and I’m hotter now than I was then. ‘It used to take me a short number of days to pick up 100,000 people. I’m not complaining.

‘Now it’s, I would say, 10 times as long. And I notice things happening, when I put out something – a good one that people like, right? A good tweet – it goes up.

The speech, to a friendly audience, resembled a performance at one of his rallies.

And he used it to make a new, incendiary charge against Democratic 2020 candidates: that they were pushing ‘something worse than socialism, Communism,’ and wanting to turn the U.S. into ‘Venezuela.’

A source inside the room told DailyMail.com that duo Diamond and Silk spoke while the platform was down. So did House Republican leader Kevin McCarthy and GOP Rep. Dan Crenshaw.

Representatives from Twitter, Facebook and Google were not invited to the White House event that was overshadowed earlier in the week by a decision to invite, and then disinvite, a conservative political cartoonist accused of using an anti-Semitic trope. 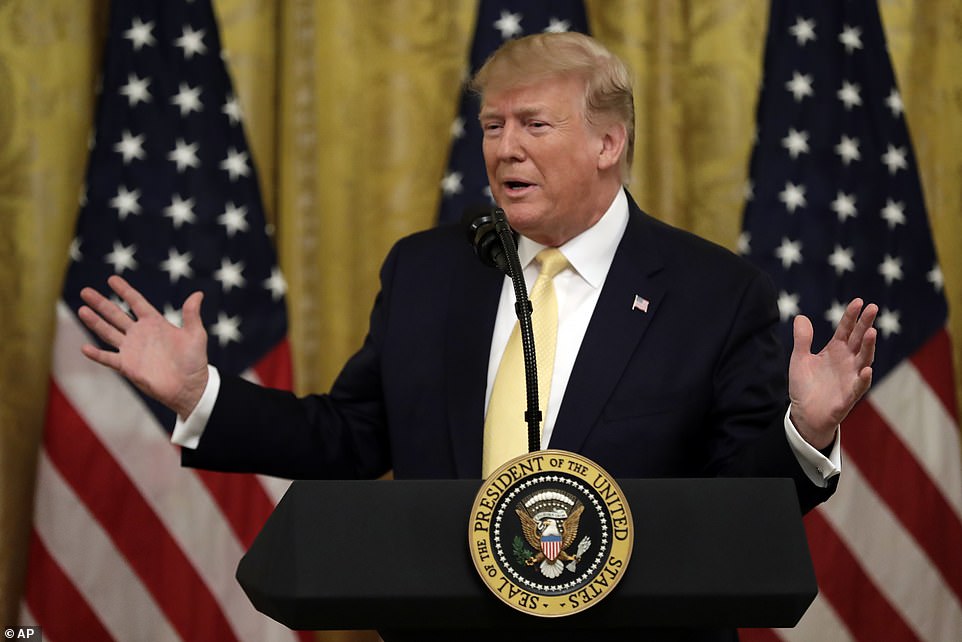 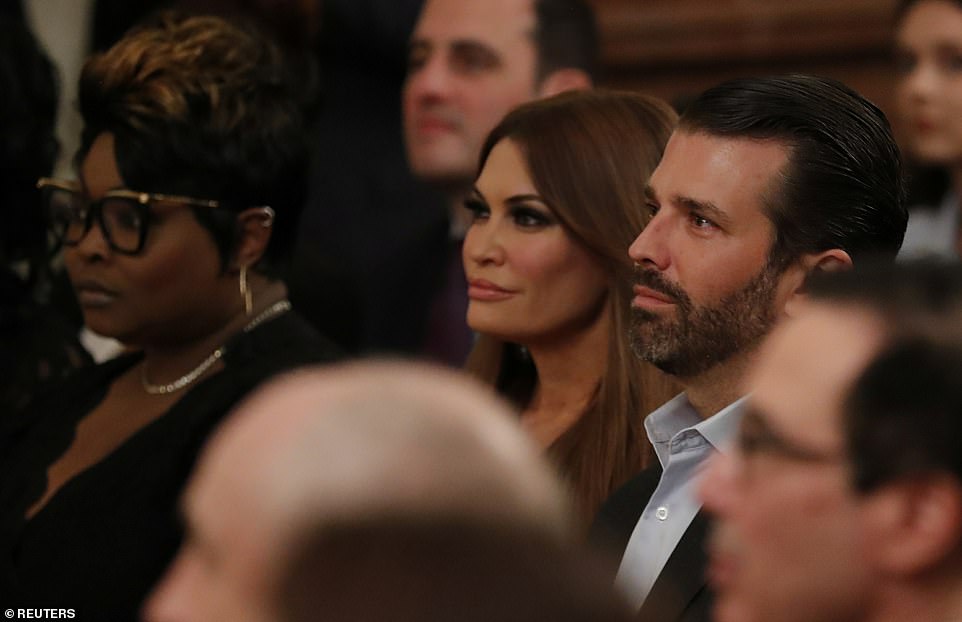 First son: Donald Trump Jr. and girlfriend Kimberly Guilfoyle were in the front of the East Room summit 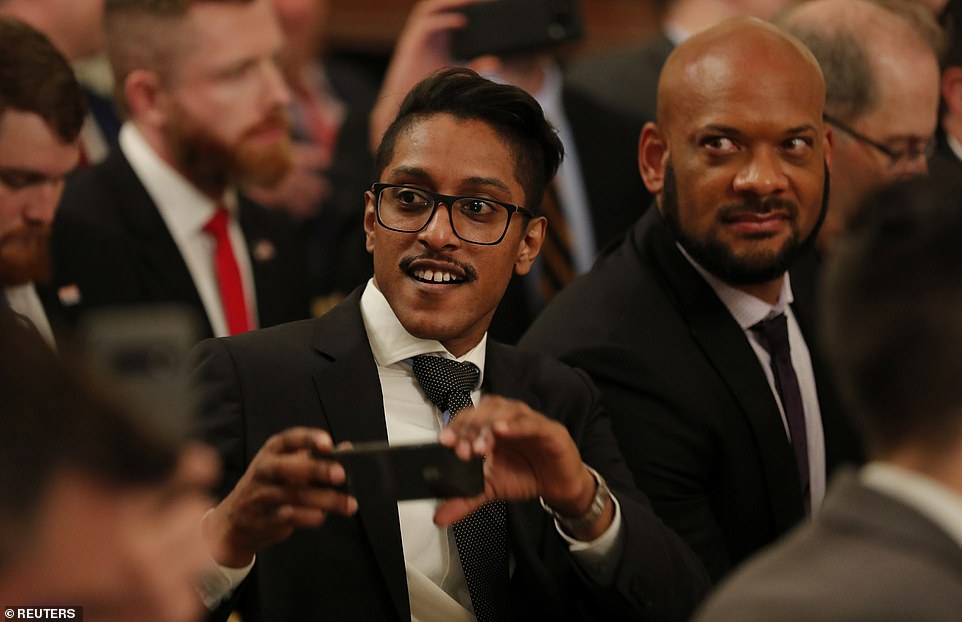 Controversial figure: Ali Alexander, whose tweet questioning whether Kamala Harris is African-American was retweeted then deleted by Don Jr. was close to the first son 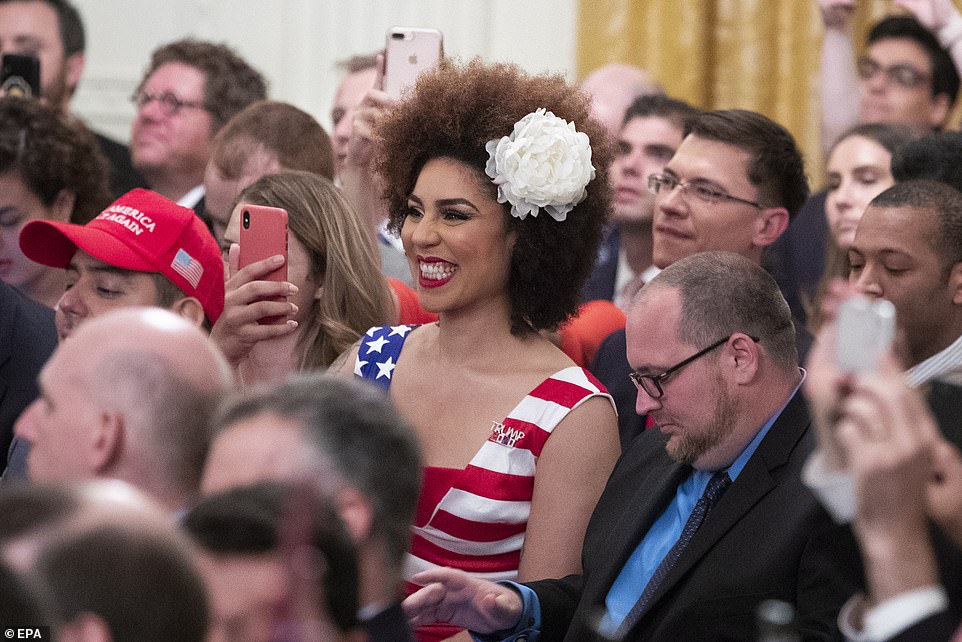 Roped in: Former bondage model turned Trump fan Joy Villa was praised for her outfits by the president. She turns up at showbusiness red carpets in pro-Trump dresses 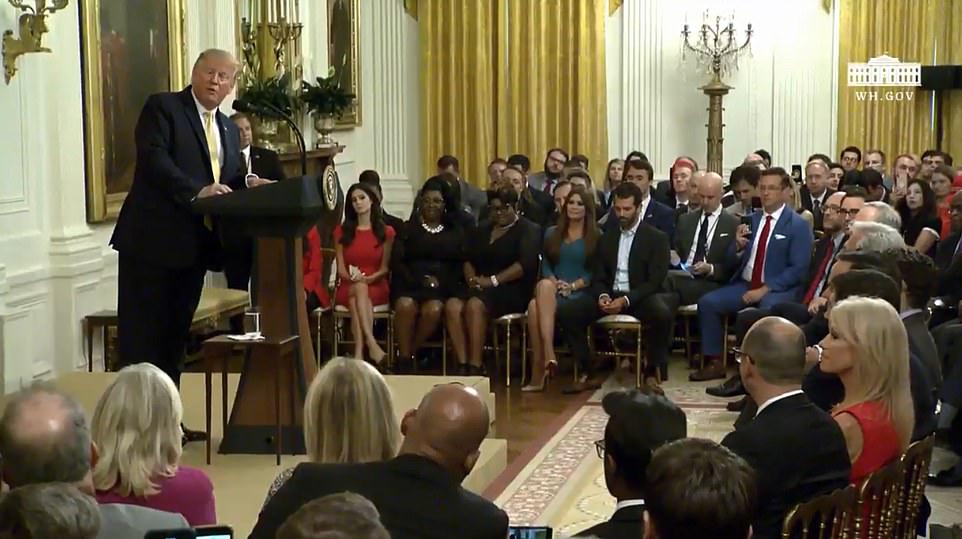 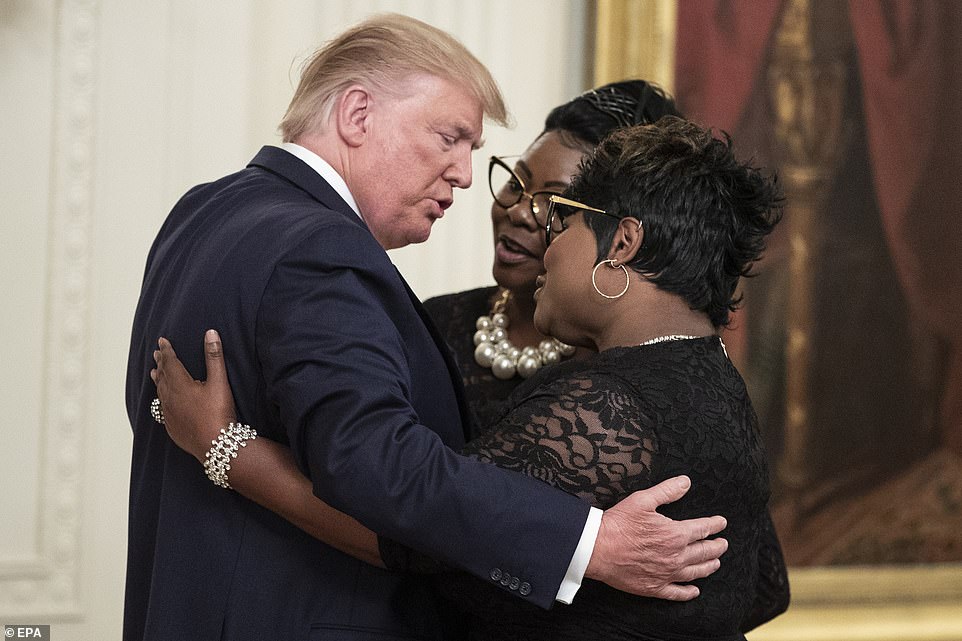 Honor: Trump invited Lynnette Hardaway (center) and Rochelle Richardson (right), known online as ‘Diamond and Silk,’ to the podium in the East Room 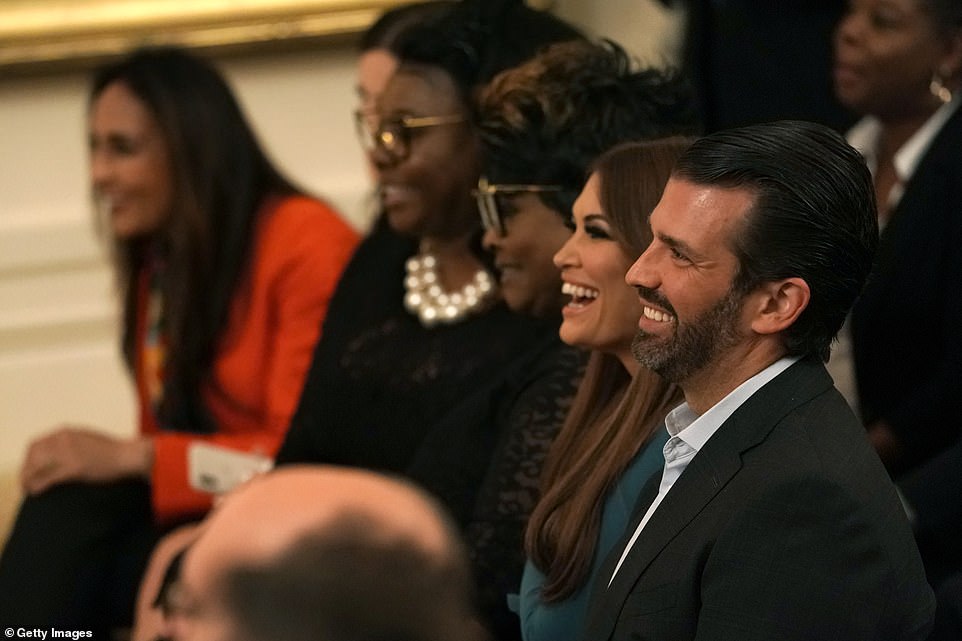 Raucous: Don Trump Jr. and girlfriend Kimberly Guilfoyle enjoyed a line from his father, the president 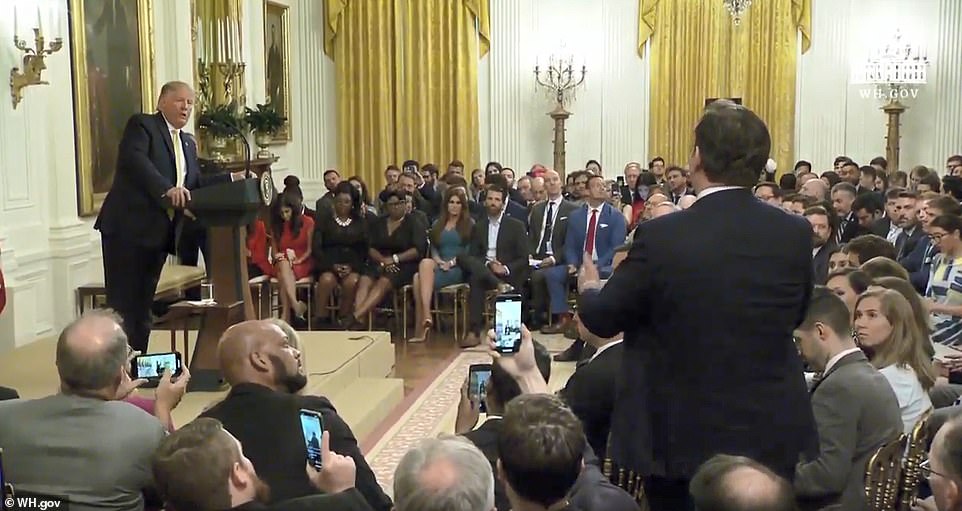 Transparency in action: Online British-born broadcaster Sebastian Gorka, whose White House career ended after just over six months, stood to ask a question – prompting the White House live stream to be cut before he had finished. Reporters were also escorted out of the room 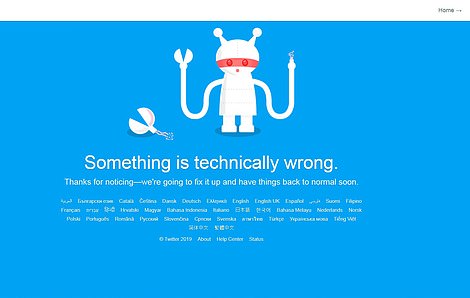 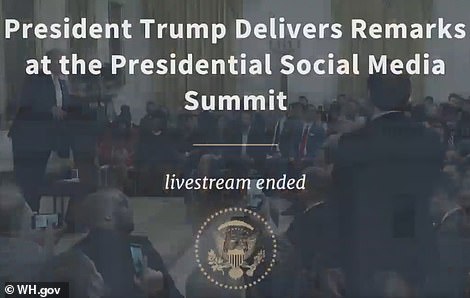 Beginning and end: The summit went on despite Twitter going down and apparently continued after the White House cut the livestream

Trump said he’d be holding a separate meeting for them later in the month. ‘they see the unfairness of what’s happening,’ he insisted in his remarks. ‘Have a big meeting and a real conversation,’ he said.

On Thursday, the president accused Twitter of engaging in a conspiracy to suppress his message and the number of followers he’s getting.

He railed against the ‘fake news media,’ as well, claiming that CNN and other outlets are trying to silence his message. ‘We’re not going to be silenced,’ he said.

‘I am not speaking for our side. I don’t even know if you’re on our side,’ he claimed, even though the guest list was carefully-curated. ‘Big tech must not censor the voices of the American people.’

The White House itself was accused of censorship this week.

Graphic artist Ben Garrison said in a statement that he had a discussion with the White House  ‘and we came to the conclusion that my presence at the Social Media Summit would be a media distraction from the President’s message.’ Both parties decided Tuesday that he should not come, he writes.

‘They were nice about it, but naturally, I’m disappointed,’ he said, at first.

But Garrison says he was driven to defend himself after the White House told a news outlet that his invited had been ‘rescinded,’ violating the pact it had made not to discuss the situation.

He said the White House’s conduct was ‘disappointing,’ as he’d been promised that Donald Trump’s aides would be ‘ignoring the entire thing.’ 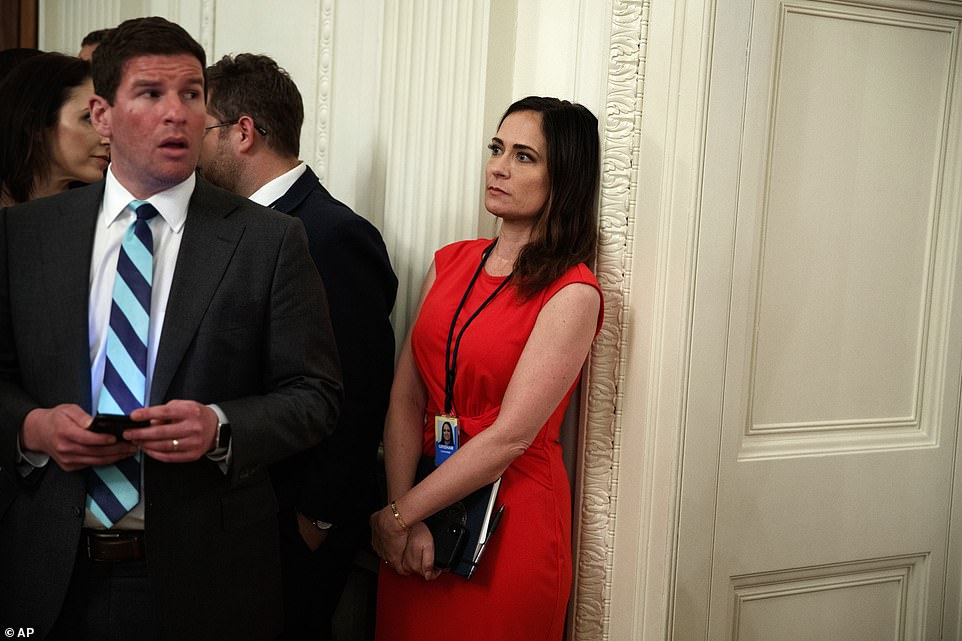 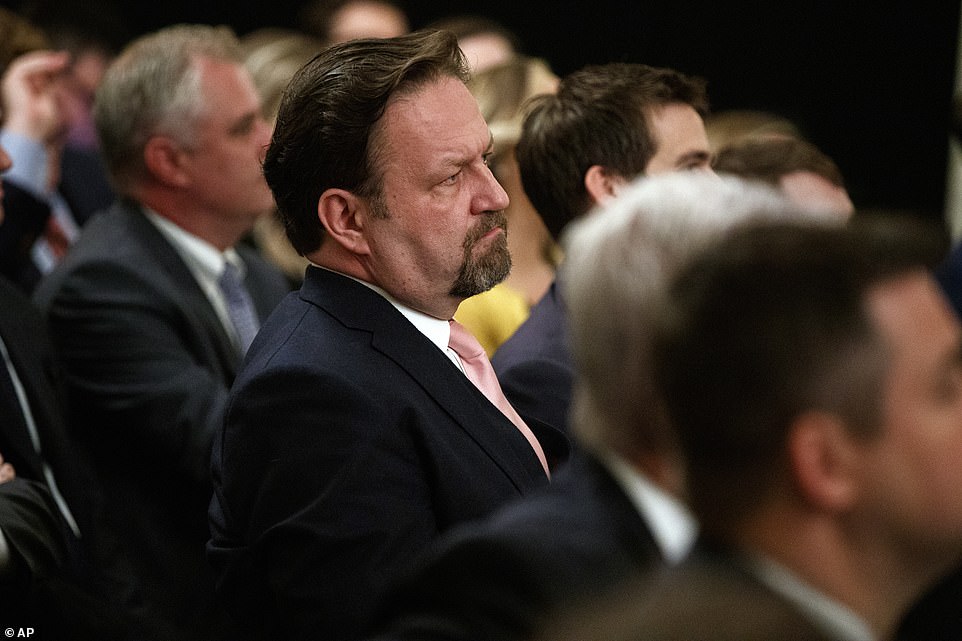 ‘It is obvious to anyone with common sense, I am not anti-Semitic,’ he said, blasting the Alliance Defense Fund for tarnishing his reputation by claiming that he is.

The White House had not released a statement at the time of Garrison’s message, though. In fact, presidential aides repeatedly told DailyMail.com that they couldn’t comment on the controversy.

Politico first reported that the cartoonist who’d posted a copy of his invitation to Twitter wasn’t coming to the event anymore and cited a senior aide as the information source.

The article did not how the arrangement came to be, however, the piece’s headline said Garrison’s invite had been ‘pulled’ by the White House.

Sources familiar with the situation would not talk to DailyMail.com about what had happened, although the fact that Garrison was not coming was confirmed.

It wasn’t until Garrison’s public statement that the chain of events was fully known.