The cast of Selling Sunset have been left shaken after an armed robbery took place outside of their office in West Hollywood, Los Angeles on Thursday.

A man was forced to hand over his luxury watch after a thief approached him with a gun as he left a restaurant in the same parking lot as The Oppenheim Group offices.

Company founder Jason Oppenheim spoke just hours after the incident occurred, and revealed that he has now banned his glamorous staff from wearing flashy watches and expensive jewels as a precaution.

‘I told them not to wear jewelry or watches anymore,’ Oppenheim told TMZ. ‘We have to be diligent, you’ve got to look over your shoulder these days.

Oppenheim, 44, also said he is now considering getting a firearm to protect himself as Los Angeles has been experiencing a crime wave in recent months.

The incident comes as crime has risen by more than 130% in West Hollywood according to Fox11.

That data was revealed by the West Hollywood Sheriff’s Station as officials looked at crime statistics from February 2021 to February 2022.

While Oppenheim said the cast of the show were not present at the time of the robbery, he promptly informed them all of the situation.

‘I’ve let everyone know of the situation,’ he said. ‘We still have to work as normal but obviously not wearing any watches.’

‘[We’re] being careful, just looking around. It was very concerning, this city is having a lot of issues right now.’ 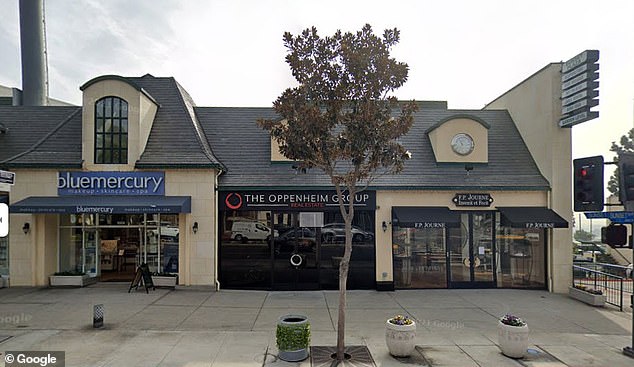 Scene of the crime: The incident took place in the parking lot behind The Oppenheim Group offices on Sunset Blvd in West Hollywood (Pictured above) 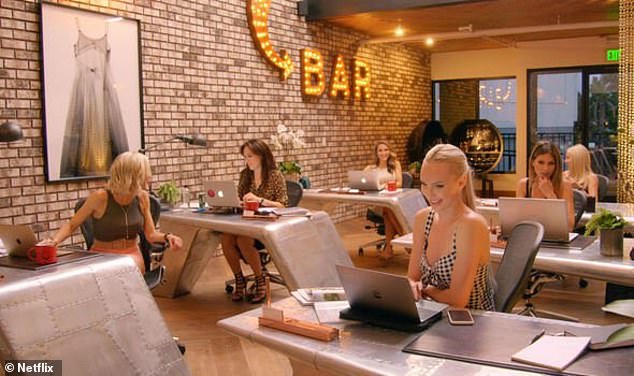 Glam office: The cast of Selling Sunset are known for dressing up to the nines for work including wearing expensive jewels and watches

When asked if he’s now going to hire armed security, the star confirmed he is talking to the landlord of the offices to get extra protection.

He also revealed he is now going to get a gun to protect himself and had already begun practice shooting.

‘Between Christine [Quinn] last week, and this in the parking lot today, it’s very real,’ he added, admitting that they have all been shaken up by the incident.

Earlier this month it was revealed that Selling Sunset star Christine Quinn had a terrifying scare after her house in LA was the target of a home invasion.

Quinn, 33, was at home asleep with her husband, Christian Richards, 43, and their nine-month-old son Christian Georges Dumontet, when they woke up to a noise outside. 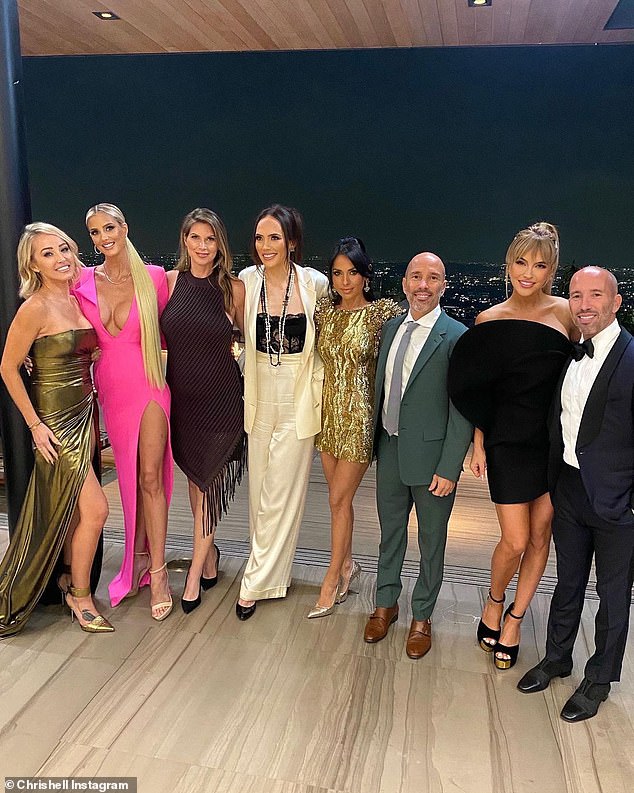 Shaken: Oppenheim, pictured above with the cast and his twin brother Brett Oppenheim, revealed he informed the cast of the robbery

The couple checked their security footage and noticed two armed robbers trying to break in through a window, as reported by TMZ.

Quinn and her husband called 911 and even though the police were quick to respond, the home invaders were gone by the time they arrived.

The star took to her Instagram Stories to discuss the scary ordeal: ‘We were sleeping and we woke up to noises. The noises started getting louder and louder, and we didn’t know what was going on.’

‘We immediately checked the security footage and outside of the master bedroom there was two armed robbers breaking our glass window,’ she went on.

‘Our windows are so strong, we have such good security in this house, that they weren’t able to get in,’ she explained. 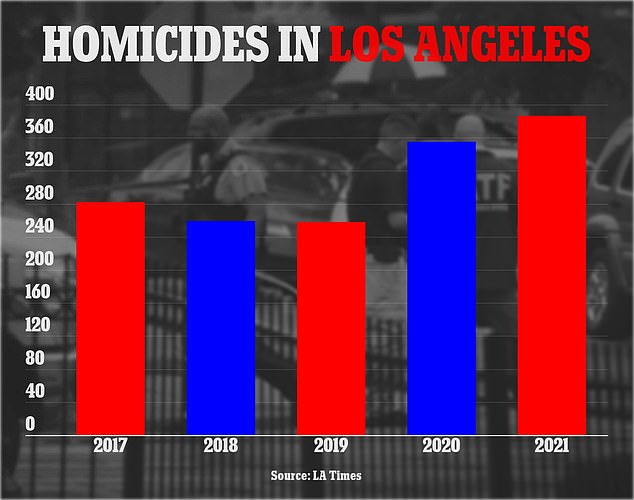 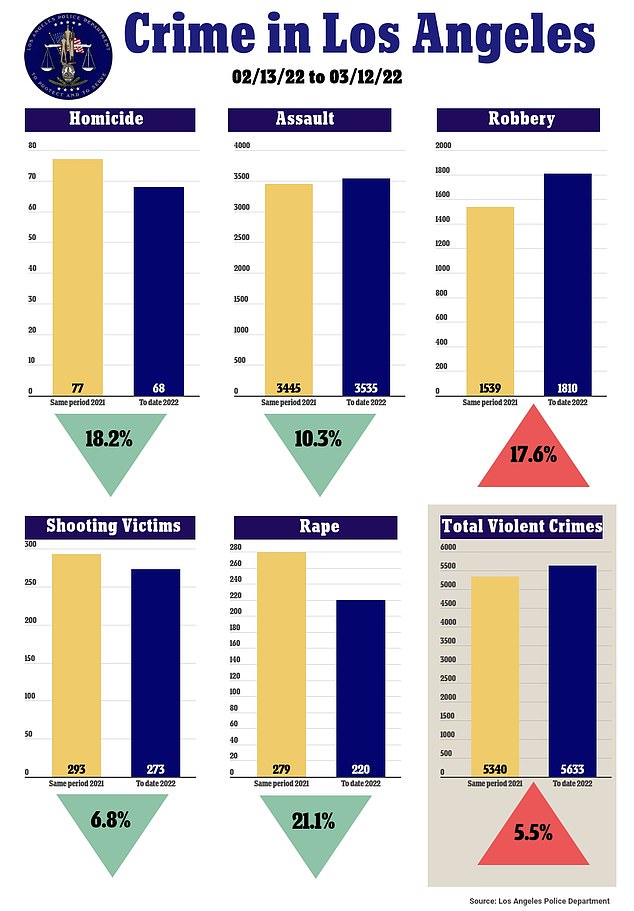 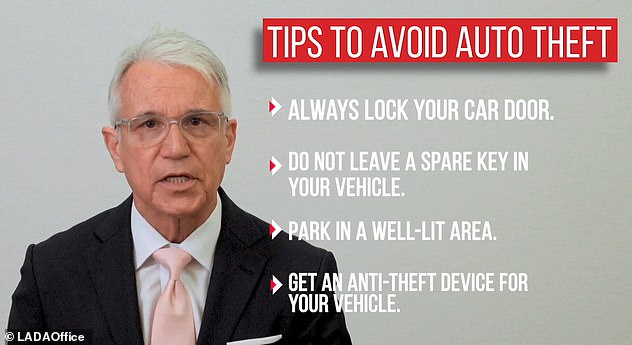 Gascon finally addressed the spike in car thefts after months of headline-grabbing incidents – which have reached a 10-year high in the city, according to LAPD statistics – by saying he is planning on ‘working with law enforcement’ to hold car thieves accountable.

‘In Los Angeles County, we’re seeing a noticeable increase in auto theft,’ Gascon starts off the PSA. ‘My office is working with our law enforcement partners to hold accountable the people involved in this property crime.’

Gascon then goes on to offer four practical tips to avoid car theft, including advising LA residents always keep their car doors locked to make it more difficult to break into and not leaving spare keys behind in vehicles.

He also advised car owners park in well-lit areas where thieves are less likely to attempt to steal vehicles and suggested investing in anti-theft devices as an extra security measure.

‘Working together, we can keep our community safe,’ Gascon says at the end of the 45 second clip.

Gascon, a 67-year-old former assistant chief of the Los Angeles Police Department, took over as district attorney in the heavily Democratic city in December 2020 and immediately embarked on a progressive justice reform agenda – eliminating the use of sentencing enhancements for gang membership, certain uses of guns and for prior convictions.