One down, one to go. Sergio Aguero will become Manchester City’s all-time top goalscorer soon enough. Just not this weekend.

Goal No.176 duly arrived against Crystal Palace at the Etihad but Aguero still remains one adrift of Eric Brook’s record set 78 years ago.

It arrived in the 80th minute of another handsome win for Pep Guardiola’s side after what, until then, had been a frustrating afternoon for the little Argentine. 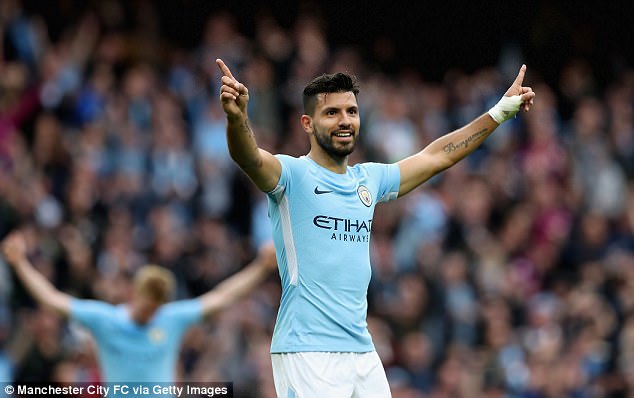 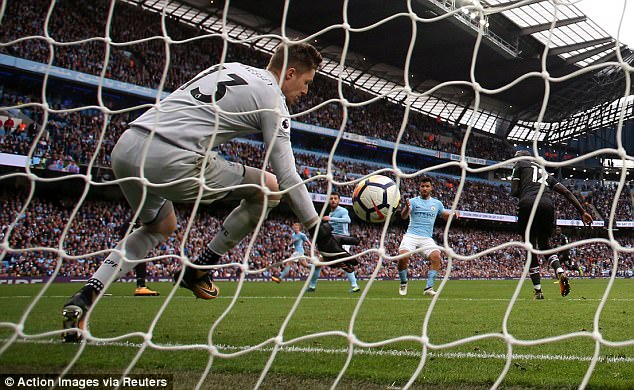 Man of the match Leroy Sane swung over a cross from the left and Mamadou Sakho’s unsuccessful attempt to cut it out left Aguero unmarked eight yards from goal. He focused on power rather than positioning, heading firmly towards Wayne Hennessey’s goal. The Palace keeper got a hand to the ball but couldn’t stop it from trickling over the line.

As Aguero celebrated with his teammates, Guardiola raised his hands in the air on the touchline. 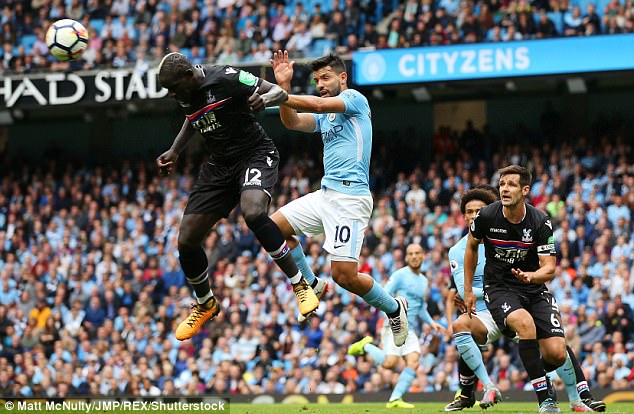 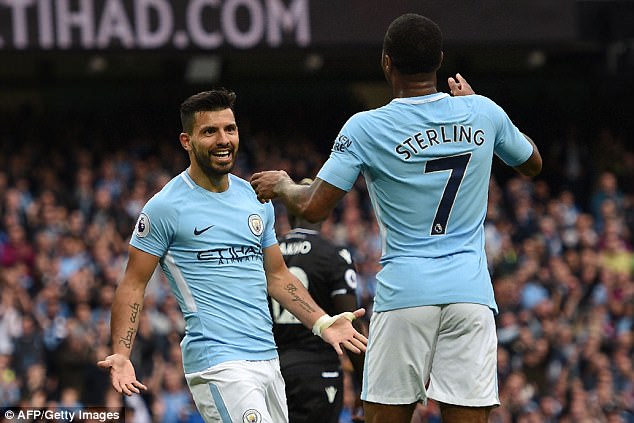 Up to that point, Guardiola seemed to have predicted how this one might pan out. ‘I’m not thinking that he is going to score three goals,’ he said on Friday when asked about the prospects of Aguero breaking the record against Palace. ‘Just that we score one, we win the game and the team plays good.’

As it turned out City scored five and played very well indeed. Again.

It was a fair question to ask, though. After all, the Premier League’s joint top scorer, fresh from a hat-trick at Watford, was facing bottom-of-the-table opponents who have now lost all six games without scoring this season. 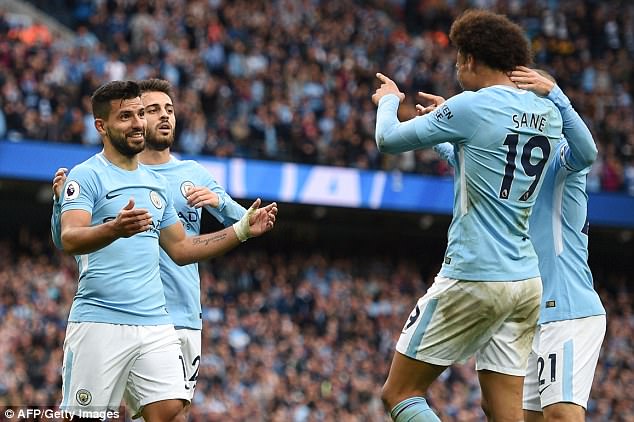 Team-mate Leroy Sane bagged a brace though, which saw the German claim Man of The Match

The stage was set for Aguero to score the two goals he needed to equal Brook’s all-time record of 177 goals for City. Or at least that’s what we thought. As it is, his coronation will have to wait for another day.

The man who would be king was forced to take a back-seat as Sane showed supreme skill to score City’s first and then set up the second for Raheem Sterling either side of half-time. It was typical of Aguero that he still set up the third goal for Sterling in the 59th minute.

It is one of the many daunting aspects about the squad Guardiola has assembled at the Etihad that when stars like Aguero don’t shine, there are plenty of others who will.

Keep out Aguero or Kevin De Bruyne, and Sane and Sterling will get you. Even Fabian Delph, who scored the fifth with a stunning strike. Let’s not forget that Guardiola still had the luxury of keeping Gabriel Jesus on the bench.

That’s not to say that Aguero did not have his chances to equal the record. A glorious opportunity arrived just moments before he sidefooted De Bruyne’s angled pass back across goal for Sterling to score that third just before the hour mark.

Latching onto the ball just inside the Palace box, he flew past Scott Dann and Sakho. Suddenly he was through on goal with just Hennessey to beat. You would have backed Aguero to score nine times out of 10 from that position but even the best have off-days. He aimed his shot straight at the Palace goalkeeper who saved with his legs. 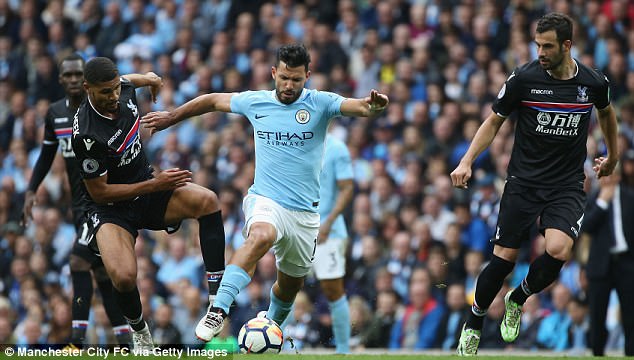 Not for the first in this match, Aguero’s miss left Guardiola clutching his head in his hands.

It had been a similar story in the 34th minute when Sane played a neat one-two with David Silva down the right and slid the ball to the edge of the six-yard box. Again, Aguero would normally have tucked it home without a second thought, but he got under the ball and spooned it harmlessly over the bar.

Three minutes later the ball reached Aguero in a similar position but this time there were defenders between him and the goal. His first effort was blocked and he tried again with similar results, not realising an unmarked Sane was crying out for the ball to his left. A wave of apology to his young team-mate followed, acknowledgement that he had taken the wrong option.

It looked like being one of those days for Aguero but it’s hard to keep a good man down. When opportunity knocked again 10 minutes from time, he finally found the net.

It’s only a matter of time now.