A gangland killer who faked illness to be sprung from jail while on a hospital visit has been told he must serve another eight years behind bars.

Shaun Walmsley, 29, was already serving a life sentence with a minimum term of 30 years behind bars when two men, armed with an Uzi submachine gun and a knife, threatened to shoot and ‘cut’ his three prison guards, before snatching him outside Aintree Hospital in the city in February 2017.

Walmsley spent 18 months on the run from HMP Liverpool before he was captured in a pre-planned operation by armed police in Leeds in August. 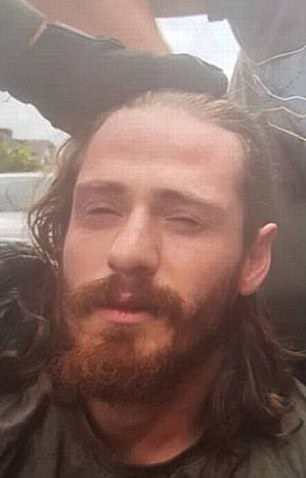 Shaun Walmsley (pictured left and right, after 18 months on the run), 29, was already serving a life sentence with a minimum term of 30 years behind bars when two men, armed with an Uzi submachine gun and a knife, threatened to shoot and ‘cut’ his three prison guards, before snatching him outside Aintree Hospital in the city in February 2017

After he was repeatedly tasered and dragged out of a car he told the officers ‘Good job boys!’, Liverpool Crown Court heard.

He was given a minimum 30 years in June 2015 for the brutal stabbing of rival drug dealer Anthony Duffy, 33.

After receiving news his appeal had been refused Walmsley hatched the prison escape by deliberately losing weight and feigning illness.

Walmsley had a consultation at the hospital on February 8 last year, where he was told he would undergo a minor endoscopy procedure on February 21 – and was able to plot his bid for freedom.

The defendant on Tuesday pleaded guilty to a single count of escape from custody. 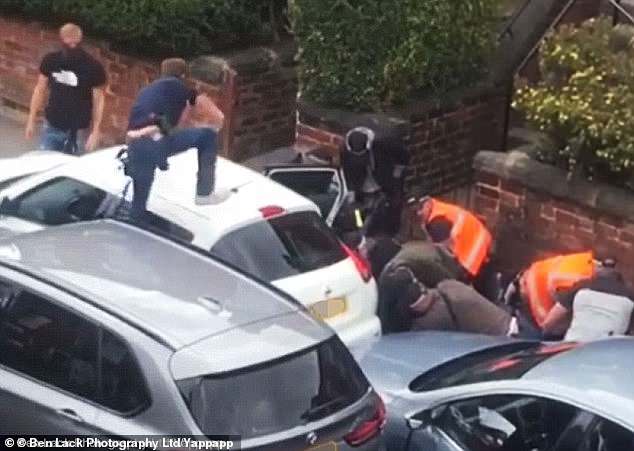 Judge Clement Goldstone, Recorder of Liverpool, told the defendant if he thought another sentence would make no difference as he was already serving life, ‘you could not be more wrong’.

He was told although he is only eligible for parole in June 2047 after that sentence finishes, he must serve another eight years – half of it in jail – before release.

The judge added: ‘After undergoing your procedure you were, to use the vernacular, sprung by two men who had parked a car nearby.

‘Each was armed one with a machine gun the other a knife and gas canister.

‘I have no doubt over the months you began to think by a combination of disguise, re-location and friends in low places you had become above the law and would remain at large indefinitely.

‘But Merseyside Police had other ideas. Eventually the joint and perfectly co-ordinated operation with West Yorkshire Police led to your arrest.’

Earlier Henry Riding, prosecuting, told the court Walmsley was one of four men sentenced to life for the murder of Anthony Duffy, who was stabbed 28 times in Aintree in May, 2014.

He began losing weight and complained of bowel problems and bleeding before being taken to the hospital with the follow up appointment planned.

Mr Riding said: ‘Subsequent to that, information from the hospital indicates tests show he had no condition of any kind. There’s every reason to suppose his, ‘condition’ was effectively a sham.’

Mr Riding said his escort was three prison officers, taking him to hospital in a private hire taxi.

The prisoner was at all times handcuffed to a prison officer, ‘even when he underwent the procedure at the hospital.’

But outside as they went to get in a taxi back to the jail two men approached threatening to shoot and stab them if they did not unlock his handcuffs.