The mystery of the mutilated fish had baffled anglers for three years. Tench in a lake had been found with their tails bitten off, and fishery boss Mark Gregory was at a loss over what to do.

But now the riddle has been solved – by a four-year-old out angling with his father. Connor Brocklesby spotted the culprit that had been wreaking havoc, a large vicious turtle.

Connor found the turtle crawling along the bank at Mesters carp lake near Scunthorpe. He fetched his father Richard, who was able to catch the 11lb reptile and put it in a bucket.

Experts identified it as a common snapping turtle, a notoriously fierce species that can bite off a finger. Native to the US and Canada, they can grow up to 75lb (34kg) and live for 100 years feeding on fish, frogs and ducklings and plants.

Because they are not found in the wild, Mr Gregory believes this one, which is about 1ft 6in long and has been nicknamed Myrtle the Turtle, was dumped by a pet owner around three years ago after it outgrew its tank.

‘We were seeing tench missing parts of their tail fins and we just couldn’t work out what was causing it,’ he said. 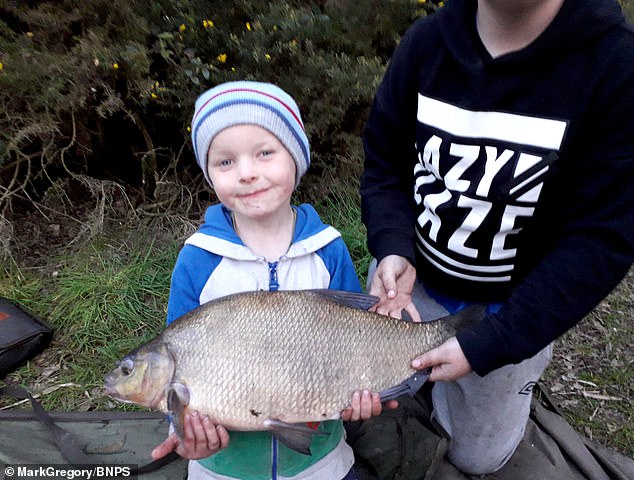 Connor Brocklesby spotted the culprit that had been wreaking havoc, a large vicious turtle (pictured: Connor with a carp) 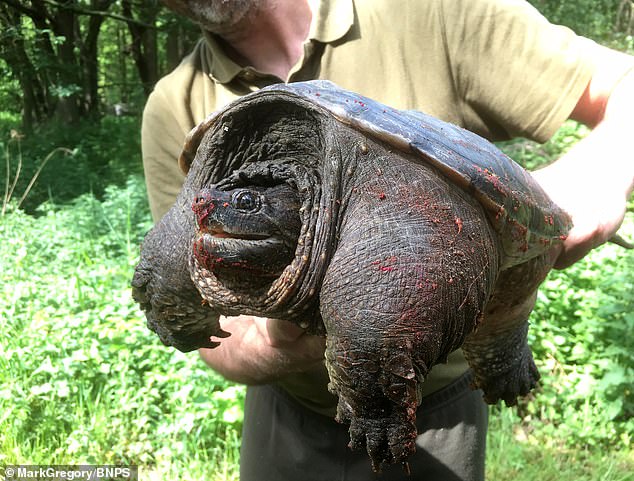 Because they are not found in the wild, Mr Gregory believes this one, which is about 1ft 6in long and has been nicknamed Myrtle the Turtle, was dumped by a pet owner around three years ago after it outgrew its tank

‘We knew we didn’t have otters and there were no claw marks on the fish, but we never even considered a snapping turtle. Why would we?

‘I’ve been working in fishery management for more than 30 years and it’s the first time I’ve ever seen one, yet alone at my own lake.

‘When it was found by young Connor I just couldn’t believe it – it had never even entered my head as a possibility. I’ve never seen anything so aggressive in my life, there was absolutely nothing even remotely cute about it.’ 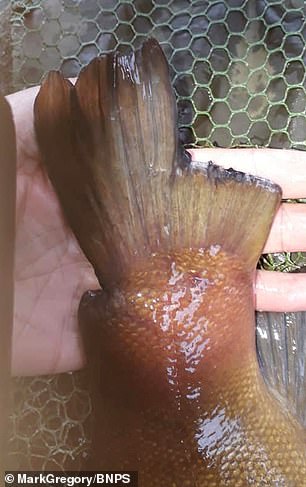 Pictured: The damage caused to a tench by the huge turtle

Mr Brocklesby, 37, said: ‘I was fishing with my eldest two kids, Lucie and Callum, when Connor told me he had seen a turtle.

‘Of course I didn’t believe him but I went to see where he was and by the time I got there Connor was patting the thing on the back.

‘In all my years fishing I’ve never seen a turtle quite like that so I messaged Mark straight away.

‘We put it in a bucket in the meantime and Mark eventually came and took it away. Connor was really excited by the whole thing and has been showing the pictures off to all his friends at school.’

Andy Rodgers, from the Lincoln Reptile and Pet Centre, said: ‘Huge turtles are most commonly dumped by their owners because they get too big and end up being unhandleable.

‘They will naturally eat fish and some vegetation, and are definitely capable of devastating local waterways.

‘It is lucky this one was discovered when it was.’