A woman was shocked to see the personal details, including a positive HIV status, of another patient on a piece of scrap paper her nurse was using to record her blood pressure at a NSW hospital.

Glenice Maxwell had gone to the emergency department at the Shoalhaven Hospital, an hour south of Wollongong, on March 17 for a more accurate check of her blood pressure.

As her nurse was writing down her reading, she noticed that on the back of the piece of recycled note paper were the private details of another male patient, including his name, number, address and clinical history.

The nurse had handed her the piece of paper to show the blood pressure results to her GP.

Glenice Maxwell had gone to the emergency department at the Shoalhaven Hospital, an hour south of Wollongong, on March 17 for a more accurate check of her blood pressure. Her nurse wrote down her reading on the back of scrap paper which had the details of another patient (pictured)

Ms Maxwell said she emailed hospital administration staff and the CEO but never heard back.

She was later told there had been a typo in one of her emails which is why it wasn’t received but Ms Maxwell said at least one should have gone through.

A staff member eventually called her to apologise and said they would investigate.

‘I couldn’t believe my eyes,’ she told Daily Mail Australia.

‘I thought a crook could make a false identity based on the information, truly gobsmacking stuff!

‘Then I worried that if I did make a complaint they’d blame the nurse when the problem is clearly systemic.’

Ms Maxwell stressed the nurse who wrote down her blood pressure reading wasn’t to blame, adding the scrap paper ‘shouldn’t have been there in the first place’.

‘The paper has clearly been guillotined,’ she added.

In an email sent to hospital administration Ms Maxwell said the use of scrap paper of old lab reports was ‘a patient confidentiality PROBLEM’. 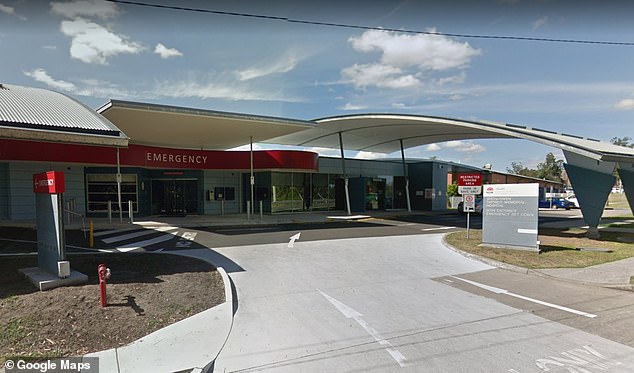 ‘It appears you people guillotine up old (or not so old in this case) lab results sheets to be recycled as ‘scrap paper’.

‘I would STRONGLY SUGGEST this is not a good idea.’

The patient in question declined to comment when contacted by Daily Mail Australia.

A spokesperson for the Illawarra Shoalhaven Local Health District said they would apologise to the patient whose privacy was breached.

‘All staff in our hospitals are bound by privacy legislation to safeguard patient confidentiality, but on this occasion, human error has resulted in a breach,’ the spokesperson said.

‘Staff in the emergency ­department deeply regret any upset this error has caused and have further tightened the ­already strict privacy protocols in place.’