Young couple shares their ‘red flag’ home sleeping arrangement before being slammed as ‘unhealthy’ by fans – so whose side are you on?

Carsyn Soto, right, and Ben Schmidt, left, have been told their relationship must be ‘on the rocks’ after they revealed they each have their own bedroom in the home they share

A young couple have been told their relationship must be ‘on the rocks’ after they revealed they each have their own bedroom in the home they share.

Posting to TikTok the 19-year-old American couple, Carsyn Soto and Ben Schmidt, from Kansas said they had recently moved in together but decided to keep separate bedrooms.

They told their followers they prefer to have their own space and wanted to be able to decorate the rooms to their own tastes.

‘At least he keeps his room clean most of the time,’ Carsyn said.

But people were quick to slam the decision as ‘unhealthy’, with some saying it was a ‘red flag’ to not want to be in the same space at night.

‘You are no longer a couple – just room mates. May as well end the relationship now,’ one man said.

‘I would break up with someone if they suggested this,’ said another.

‘How are you supposed to have spontaneous intimate moments – or are you the kind of people who put that in a calendar – gross and unhealthy,’ one woman added.

However others backed up the young couple and revealed they love the idea of having their own room. 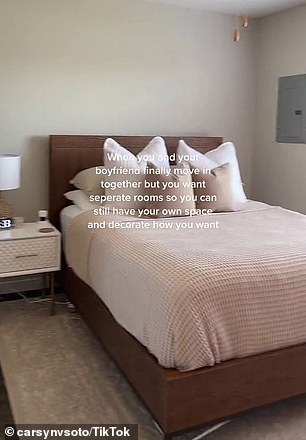 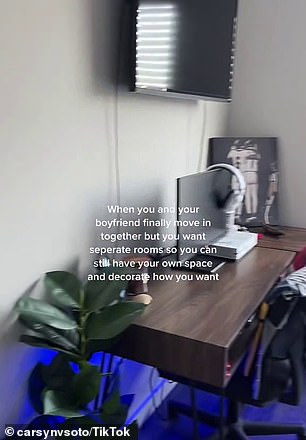 ‘My bf has ADHD and I’m NT. We have separate bedrooms so he can create as many piles of organized chaos as he wants without driving me crazy,’ one woman said.

If you could, would you have a separate room to your partner?

Another woman argued having separate bedrooms doesn’t invalidate the relationship.

A third noted it ‘sounds really nice’ and admitted she would consider it if she had the space.

‘This is great – sleepovers in each other’s rooms bust still have your own space, love it,’ one woman said.

‘I would be texting her to come over even though her room is the next one along,’ another said.

Some said the arrangement is perfect for shift workers, people with sleeping issues, people who snore or people with mental health.

Another woman said she started with separate bedrooms before adding his and her bathrooms to the mix. 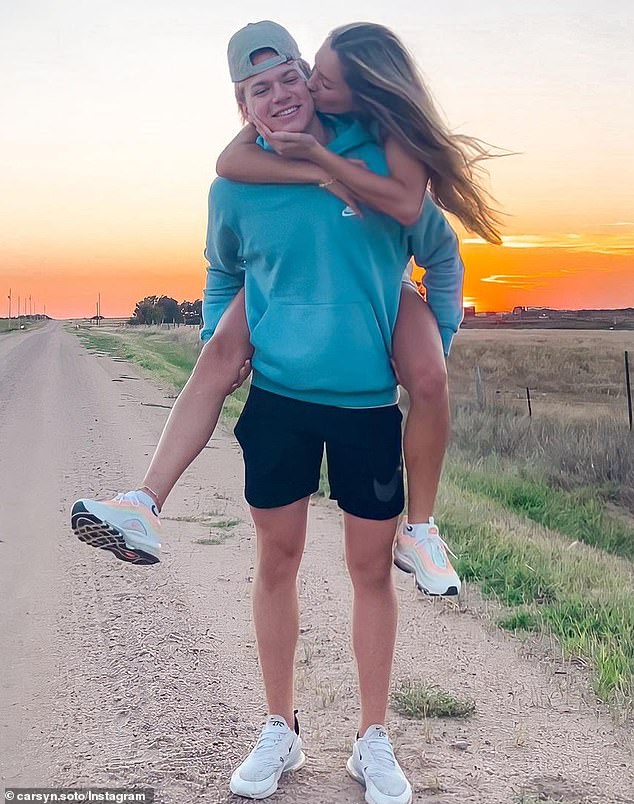 * Spending a lot of time on their phone

* Never asking questions about you or your life

* Avoiding introducing you to friends

* Always saying they are busy

‘It was life changing for us – we have sleep overs whenever we want but never argue about mess anymore.’

The video also appeared to get people on board with the idea of having their own space.

‘I used to think this was weird until I moved in with mine. Sir, ima need you to move into the room next door,’ one woman said.

The video has been liked over 420k times after going viral with 2.6million views.