Shrinkflation IS happening! ONS finds 206 products including chocolate bread have shrunk since 2015

Shrinkflation IS happening! Official study finds 206 products including chocolate bars, bread and cereal have got smaller since 2015 – but it’s NOT linked to Brexit

Shrinking chocolate bars, cereal boxes and loaves of bread have contributed to a rise in ‘shrinkflation’ in Britain – but it is not due to Brexit, new figures show today.

Data from the Office for National Statistics (ONS) revealed that 206 products shrank in size between September 2015 and June 2017.

They included bread and cereals, meat, sugar, jam, syrups, chocolate and other confectionery.

Prices tend to stay the same when products change size, the ONS said, consistent with the idea that some products are undergoing ‘shrinkflation’.

While the statistics agency said manufacturers had blamed the drop in size on the rising cost of raw materials, it dismissed the idea of Brexit being a factor behind the shrinkage. 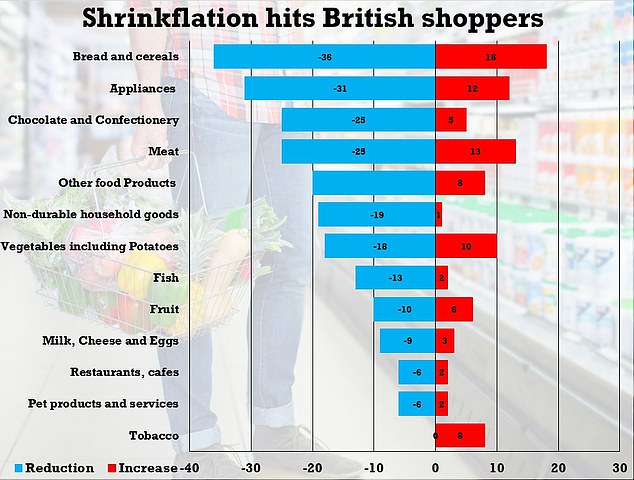 Despite the collapse in the pound following the Brexit vote driving up costs for businesses, the ONS said the shrinkflation trend remained ‘stationary’ in the period following the referendum.

There are several examples of shrinkflation since 2015.

Bags of Doritos were also hit by Shrinkflation in april 2017, with sharing bags dropping from 200g to 180g – despite no change in price.

Mars announced in March 2017 that bags of Maltesers, M&M’s and Minstrels were getting smaller, shrinking the pack sizes by up to 15 per cent.

Maltesers sharing backs went from 121g to 103g.  Other products to shrink included Birds Eye fish fingers – with the number of fingers dropping by two in a pack, and  Kellogg’s Coco Pops.

Mike Hardie, head of inflation at the ONS, said: ‘Over the last few years, consumers may have noticed that some companies have reduced the size of their products while the price remained the same, which is often attributed to operational and material cost rises.

‘Our updated analysis of this subject indicates which type of products have decreased in size.

‘The majority of size changes occurred in the food and drink sector. Every day staples such as bread and cereal are most likely to have seen reductions in size, while consumers may also find some chocolate products to be smaller now than they once were.’ 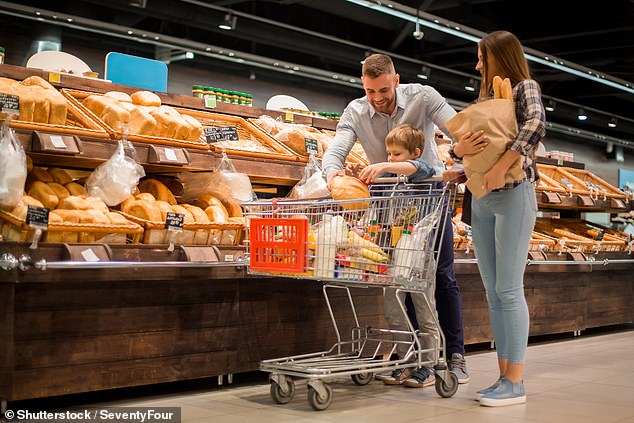 Shrinking chocolate bars, cereal boxes and loaves of bread (file image) have contributed to a rise in ‘shrinkflation’ in Britain – but it is not due to Brexit, new figures show today

Products within the food and drink category accounted for 70 per cent of the size reductions recorded by the ONS.

Non-food categories that saw the most changes in size – both reductions and increases – were appliances and products for personal care (such as toilet rolls, nappies and tissues) and non-durable household goods, including kitchen roll and washing-up liquid.

Bread and cereal products saw the greatest frequency of changes in size in both directions.