Sir Lenny Henry says he would never appear on Who Do You Think You Are? because his Jamaican ancestors were slaves and fears it would be too sad

Sir Lenny Henry would never appear on the TV programme Who Do You Think You Are? because his ancestors were slaves and he fears becoming too emotional.

The actor, 60, is playing head slave Godfrey in the new BBC1 drama The Long Song.

Sir Lenny also said he wants the BBC series to create a national conversation about the UK’s involvement in the slave trade.

The British comedian, 60, said the tale of a woman enslaved under British rule in 19th century Jamaica had renewed relevance in today’s political climate.

Ahead of the show’s release next week, he said: ‘My family are from Jamaica, it’s why I don’t do Who Do You Think You Are? because within two or three generations is slavery and I’d be there two minutes in crying ”They’re all slaves!”’

‘That’s how slaves lived, they buried them on the property.’

Sir Lenny, who stars as Godfrey in the BBC One series, said he wanted the adaptation to become the British equivalent to American miniseries Roots.

That 1977 book adaptation followed the family of Kunta Kinte, a Mandinka warrior enslaved and sold to a plantation in the southern United States.

Set during the final days of slavery, The Long Song follows strong-willed young slave July, played by Tamara Lawrance, and was adapted by Sarah Williams from Andrea Levy’s book. 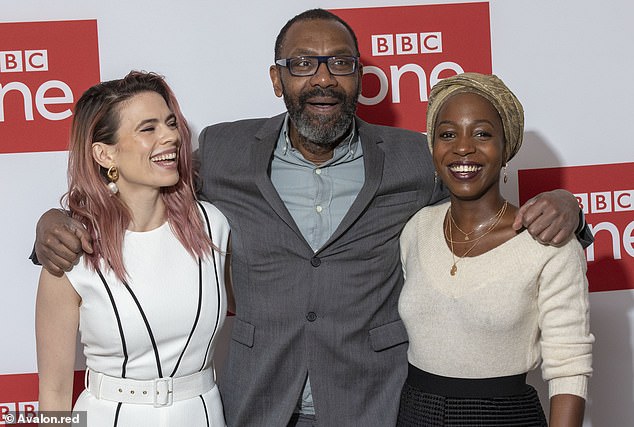 Hayley Atwell (left), Sir Lenny Henry and Tamara Lawrance at a photocall for the new BBC One Drama The Long Song

He said: ‘When you make something you want it to be part of the national conversation and I think this will evoke a conversation about the past.

‘We’re in a place where racism is on the agenda – Black Lives Matter, and also this idea of knowing (that) if you don’t know what happened, you’re not going to know what’s happening.

‘We need to look at the past so we can think about what happens going forward. Slavery is still happening, so we need to watch these things and be informed going forward.’ 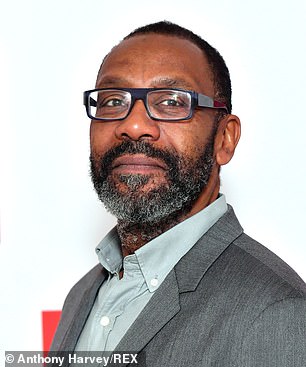 Sir Lenny said he would never appear on the TV programme Who Do You Think You Are? because his ancestors were slaves and he fears becoming too emotional

Sir Lenny said it was important the British public learnt about their country’s role in the slave trade, adding that the UK’s full involvement had been omitted from schools.

He said: ‘I wanted to be part of this story because the retelling of the story of slavery and the British empire’s involvement is something that needs to be known because this is stuff we didn’t learn at school.

‘I went to Blue Coat Secondary. We learned about Clive of India and the triangle, but we didn’t learn about Bristol or Liverpool or Manchester and Preston and Carlisle, and all those ports that were built from the profits of slavery, and the Black Country’s involvement in the Industrial Revolution, making irons and chains and guns for the slave trade.’

The Long Song will air on BBC One on December 18.