Six people have been hurt in a Daytona, Florida shooting that occurred as thousands of Americans defied social distancing measures to celebrate Memorial Day weekend.

Two people were shot and four were hit by shrapnel in the incident around 7.30pm Saturday on South Ocean Avenue near Breakers Oceanfront Park.

Gunfire erupted along the beachside road where more than 200 people had gathered and were seen partying and dancing. Several people were wounded and taken to the hospital but the injuries are not life-threatening, authorities said.

Police said no suspects were arrested and the victims were not cooperating with the investigation.

Authorities had been expecting in influx after last week Governor Ron DeSantis changed lockdown measures from 25 percent to 50 percent capacity.

‘Disney is closed, Universal is closed. Everything is closed so where did everybody come with the first warm day with 50% opening? Everybody came to the beach,’ Volusia County Sheriff Mike Chitwood said at a Sunday news conference, referring to crowds in the Daytona Beach area.

Cocoa Beach, Florida, is packed with Memorial Day beachgoers on Saturday. The beaches are open for business again during the coronavirus epidemic

Cops are looking for one man suspected of encouraging a crowd to gather due to him tossing money out of a car. A video shows approximately 200 people surrounding a vehicle parked on State A1A road outside Burger King.

Chitwood vowed to identify and charge the man but did not say what he would be charged for.

Police said several incidents occurred in the area this weekend, but no one has been arrested.

Volusia County Beach safety director Ray Manchester said along a 47-mile stretch of beach, 300 people rescued by lifeguards Saturday in the Gulf Coast. He said about the beach: ‘Every part of it was full’.

The holiday weekend activity apparently put ‘terror’ into local residents and visitors to the area. Volusia Councilwoman Billie Wheeler told the Orlando Sentinel that a hotel owner reported 26 guests checking out Sunday due to the events of Saturday. 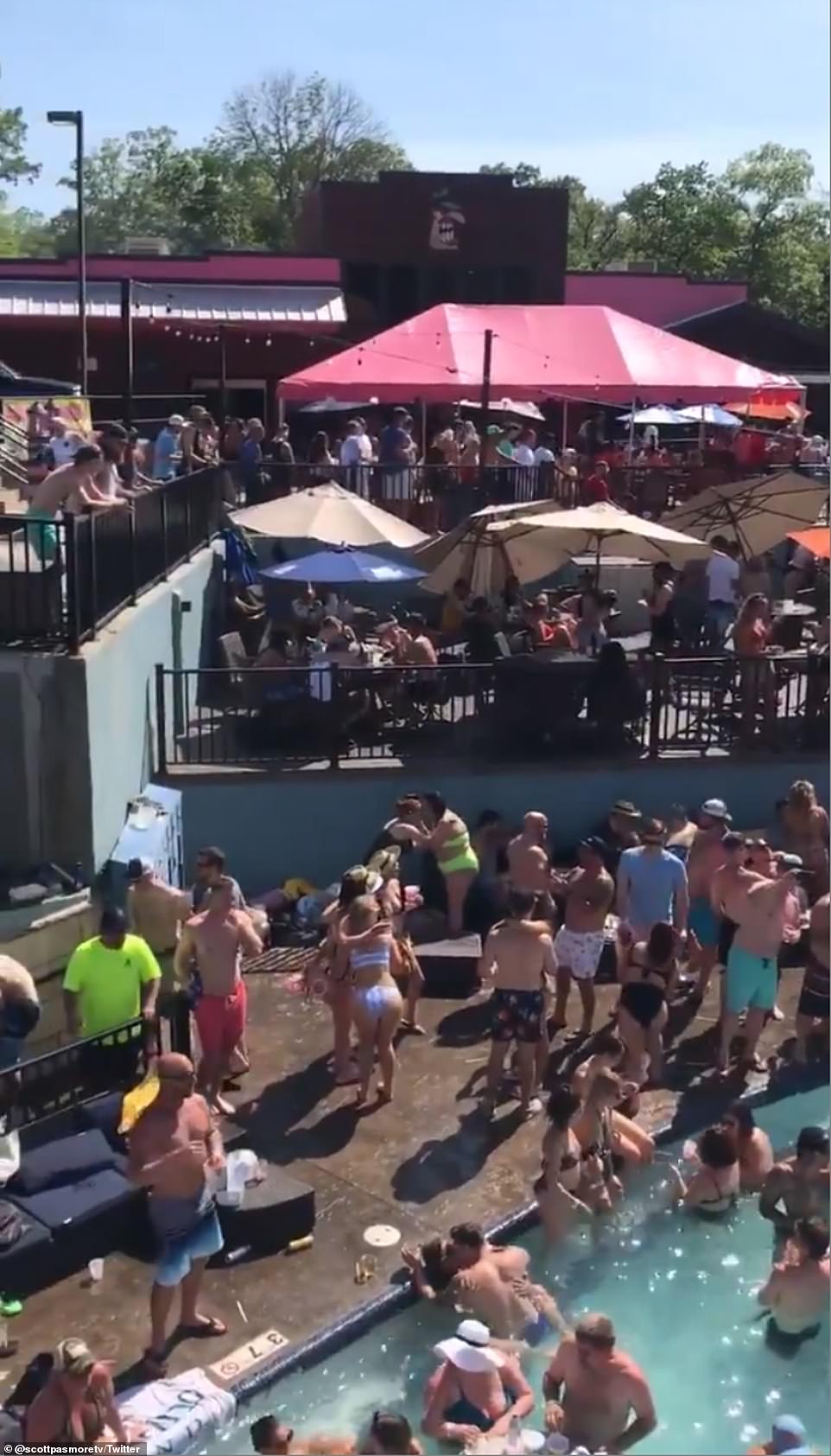 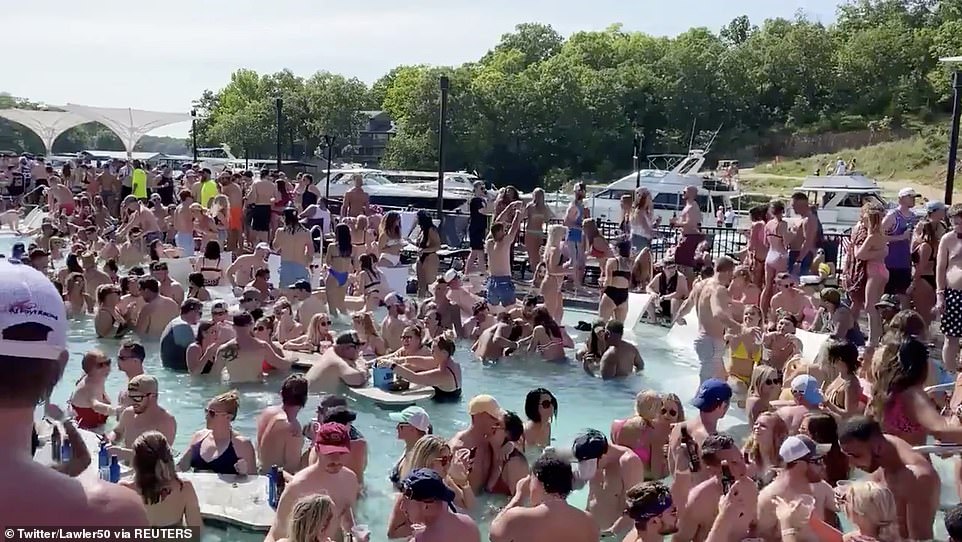 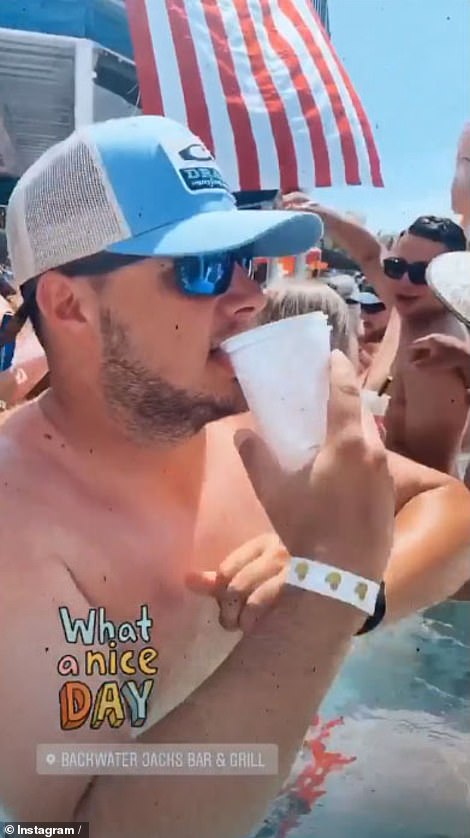 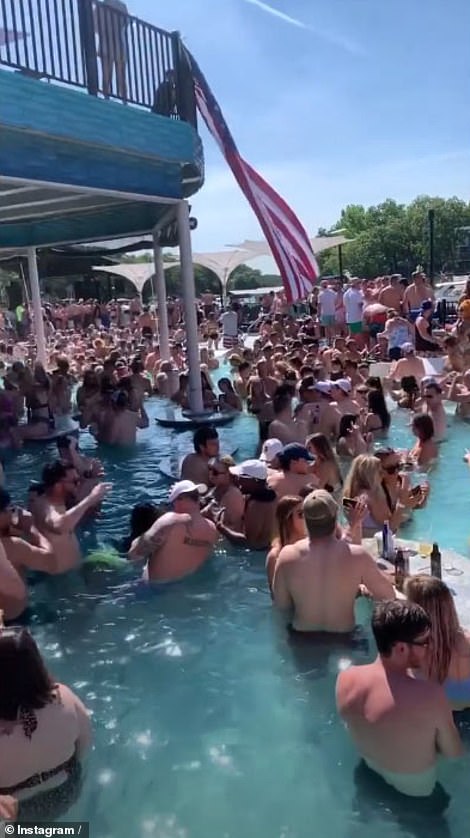 ‘What a nice day’: Blackwater Jack’s hosted their first party of the summer pool season despite the coronavirus pandemic 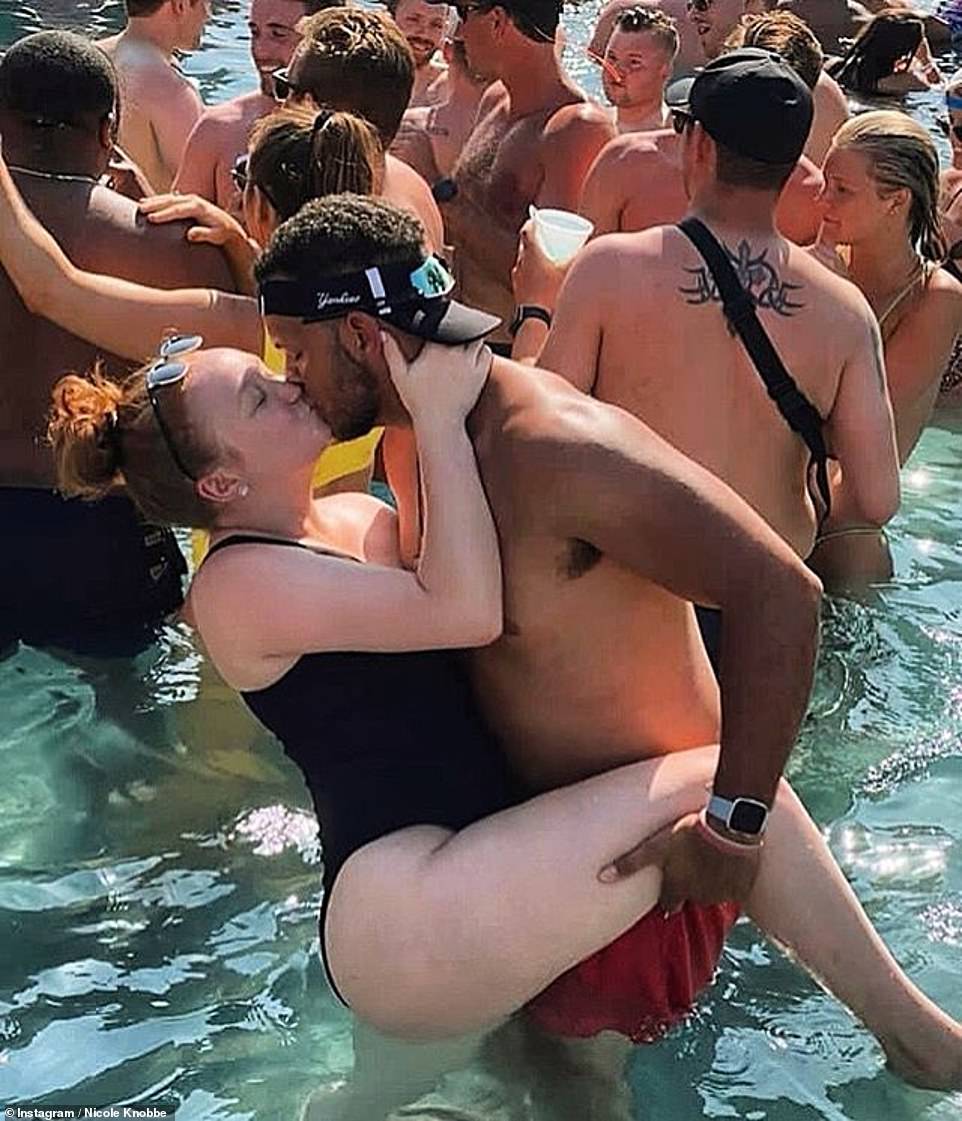 A man and woman are seen kissing at Shady Gators, a multi-level bar and grill restaurant on Lake of the Ozarks, Missouri 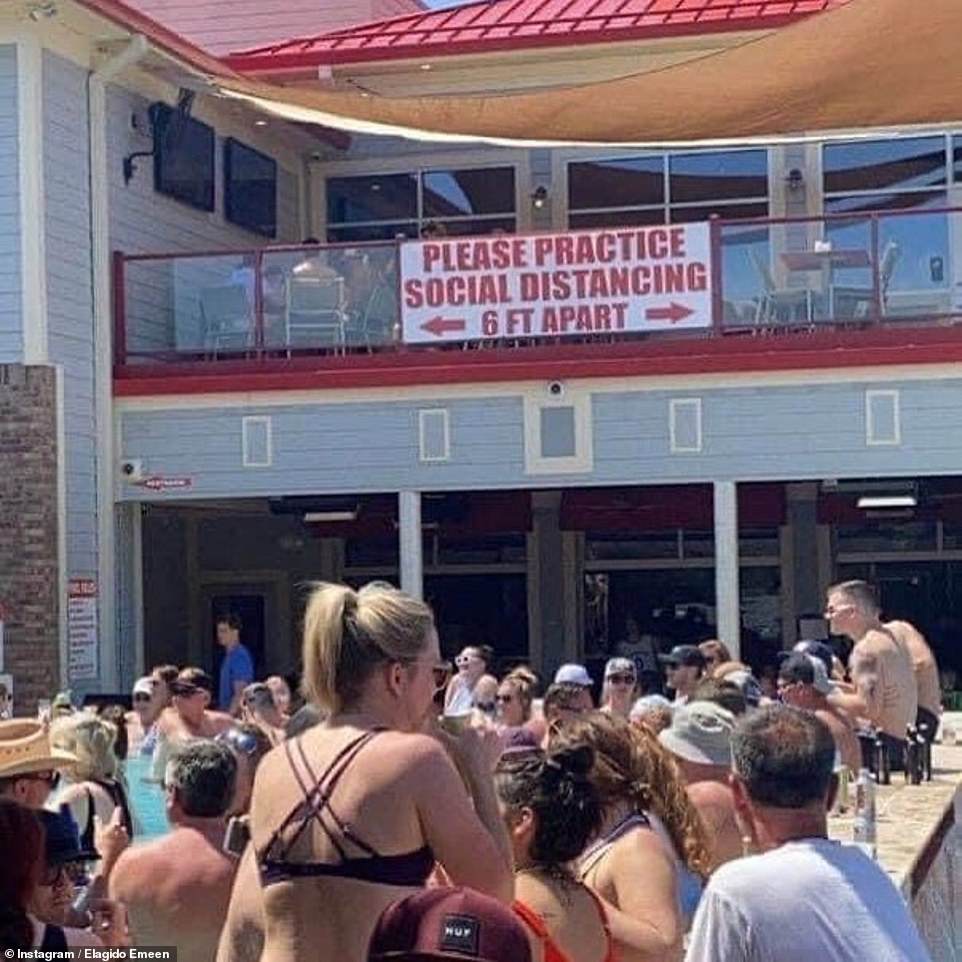 Despite a sign as Shady Gators asking people to keep six feet apart, people are seen crowding around the packed venue 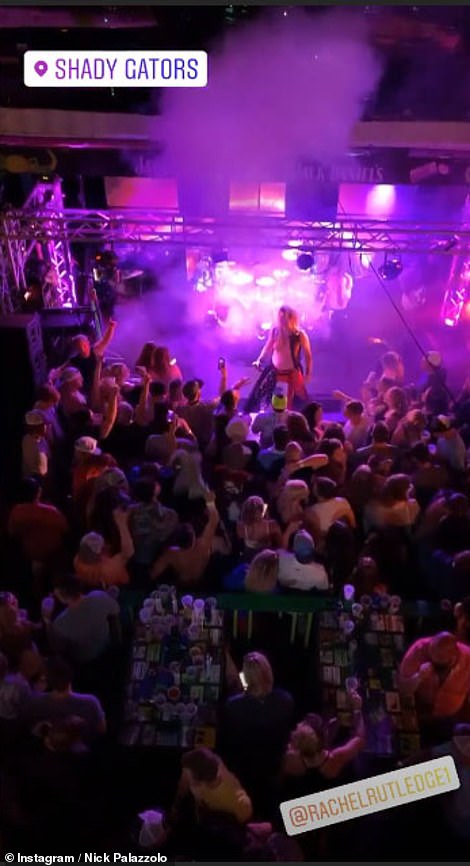 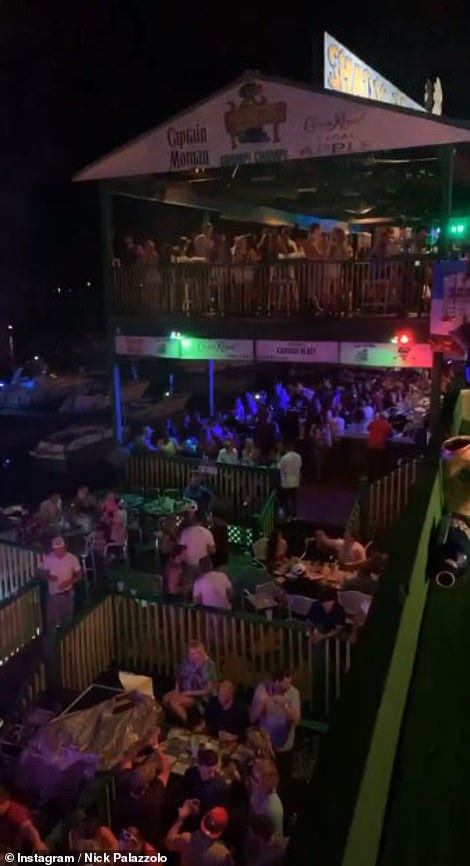 Hundreds of revelers have been spotted partying at Lake of the Ozarks on Memorial Day weekend, with a complete disregard for social distancing guidelines amid the coronavirus pandemic.

It seems people across the country had the same idea this holiday weekend as the scene was similar from California to Florida’s Gulf Coast.

In Missouri there were almost 12,000 confirmed cases of COVID-19 and 681 related deaths on Sunday. In Osage county there were five cases.

Missouri appeared to be enjoying the first phase of Parsons’ reopening plan which states that gyms and hotel swimming pools can open ‘if they adhere to strict social distancing and sanitation protocols.’

Health experts have not indicated that coronavirus can be spread in water. However some merry pool-goers were filmed holding hands and kissing.

Backwater Jacks event organizers Zero Ducks Given advertised that they had worked with government officials to kick off pool season safely. They stated on Facebook there would be reduced capacity but did not say what their limit was for the gathering which started at 11am.

Signage at Shady Gators reminded attendees to stay at least six feet apart but it was blatantly ignored by many. 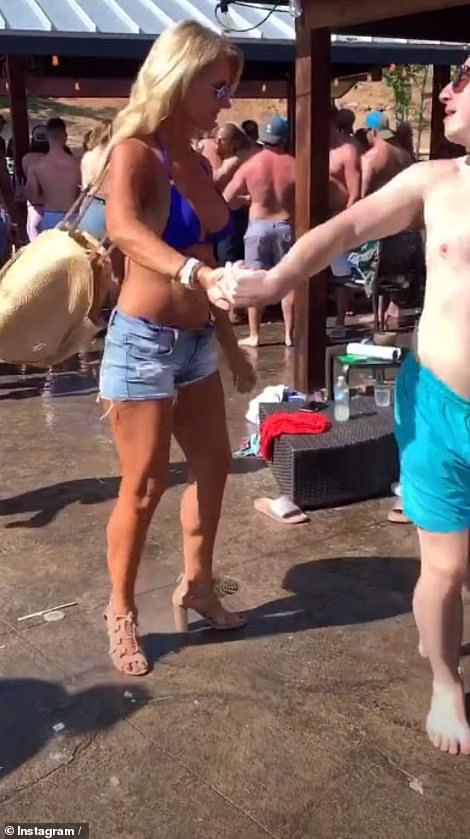 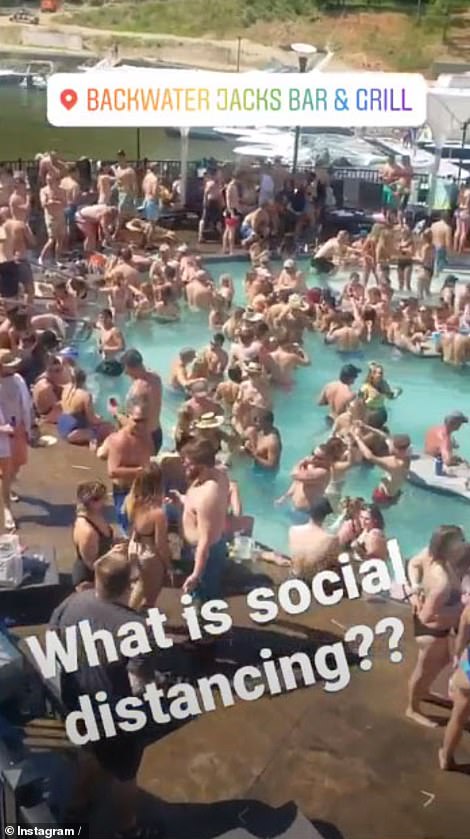 Pictured left, a merry party guest twirls a passerby. Right, an attendee points out the rules being broken at Backwater Jack’s 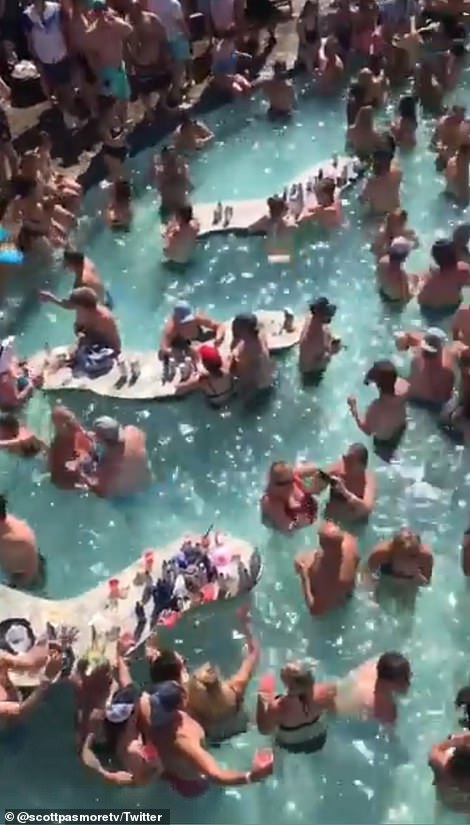 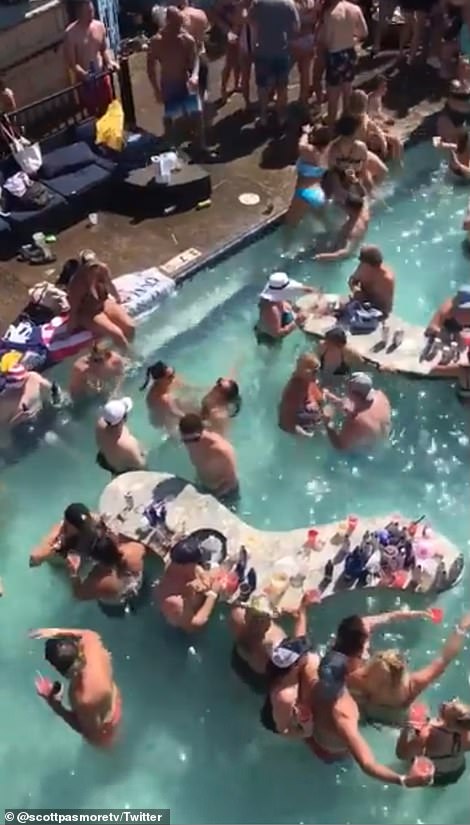 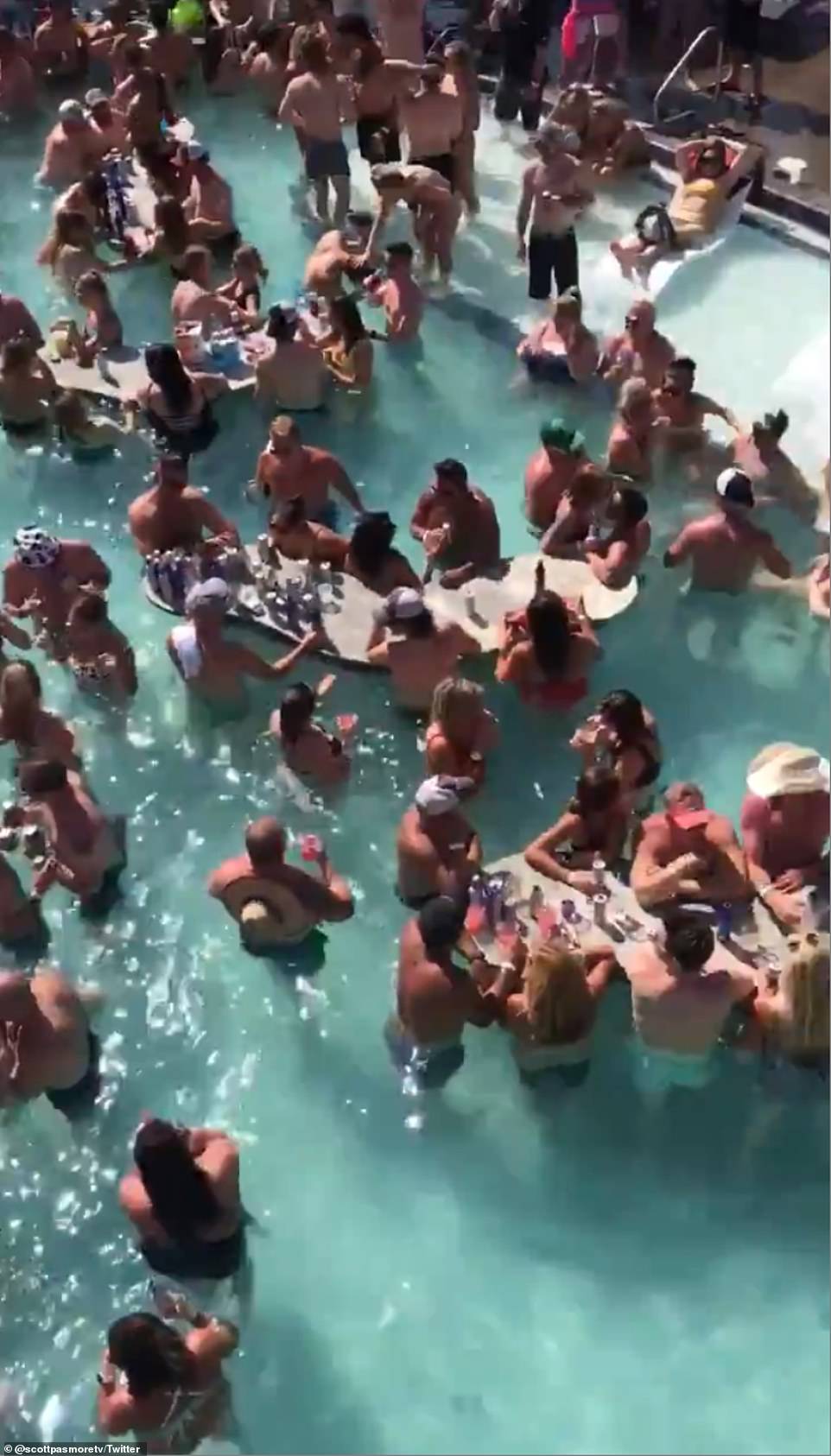 Carefree: The attendees seemed relaxed as they soaked up the sun and cooled off in the pool this Memorial Day weekend 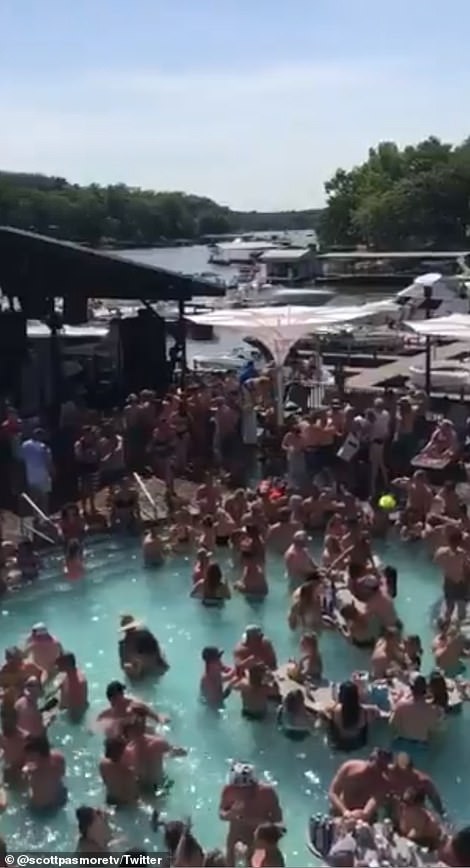 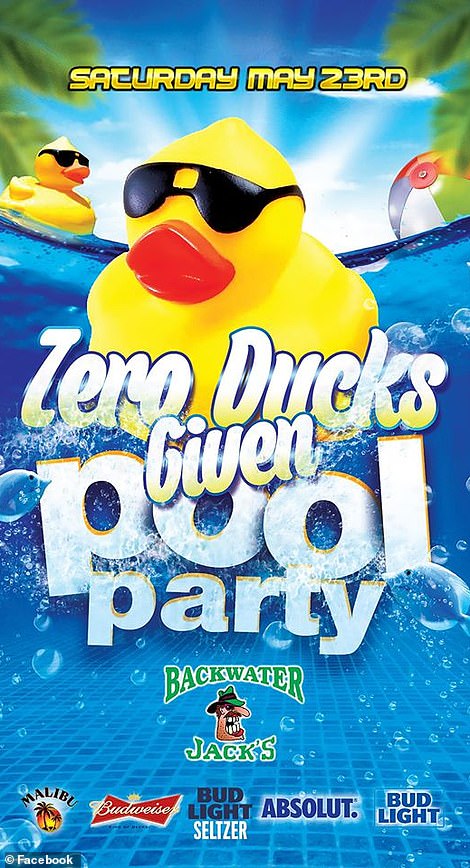 Lake of the Ozarks reportedly had one of its busiest Memorial Day weekends this year. Surrounding venues were booked out too. Right, is a flyer for the Backwater Jack’s event

Video showed people inches away from one another at swim-up bars and bathing suit-clad drinkers hugging and dancing closely.

‘No covid concerns at the lake of the ozarks,’ Scott Pasmore, an KTVK-3TV Arizona anchor tweeted.

It wasn’t just the pool area that appeared very overcrowded, the bar area overlooking it was filled with revelers too.

One attendee said they did a good job.

‘When we walked up my first words were “oh my gosh” it was intense for sure!! Social distancing was nonexistent. However everyone was enjoying themselves. It was a very carefree environment but security was heavy!’ Jodi Akins told CNN. ‘They checked all of our temps and had thousands of little bottles of hand sanitizer!! They did a good job with what they had to work with!’

Despite the advised reduced capacity, the area in general was predicted to have one of its busiest weekends for the holiday this year. 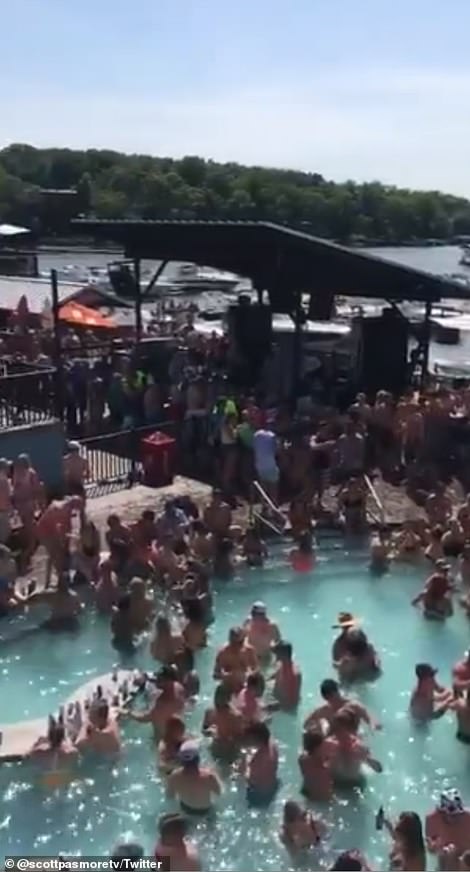 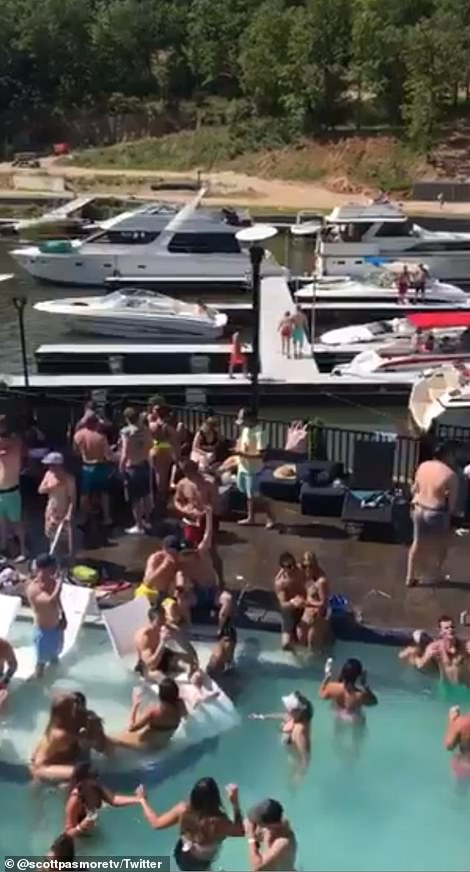 The venue claimed it would have temperature checks at the gate. The restaurant also said hand sanitizing stations would be on the grounds 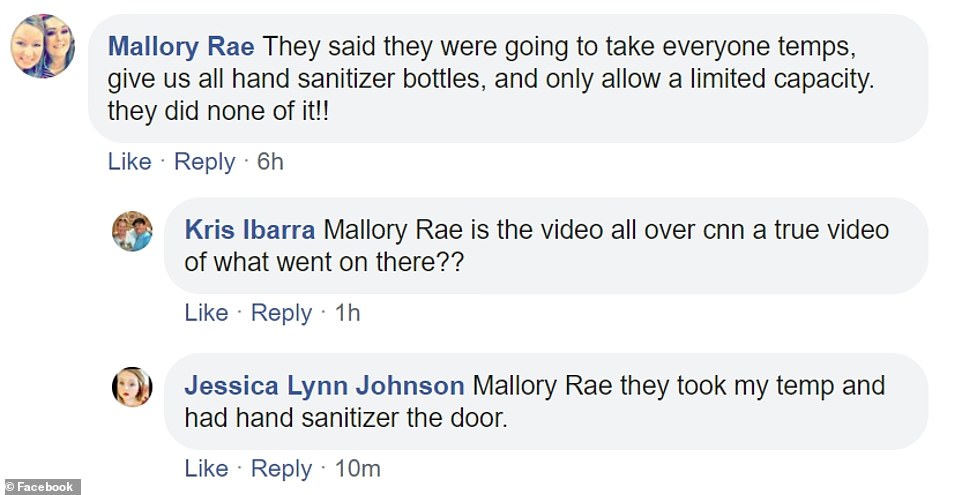 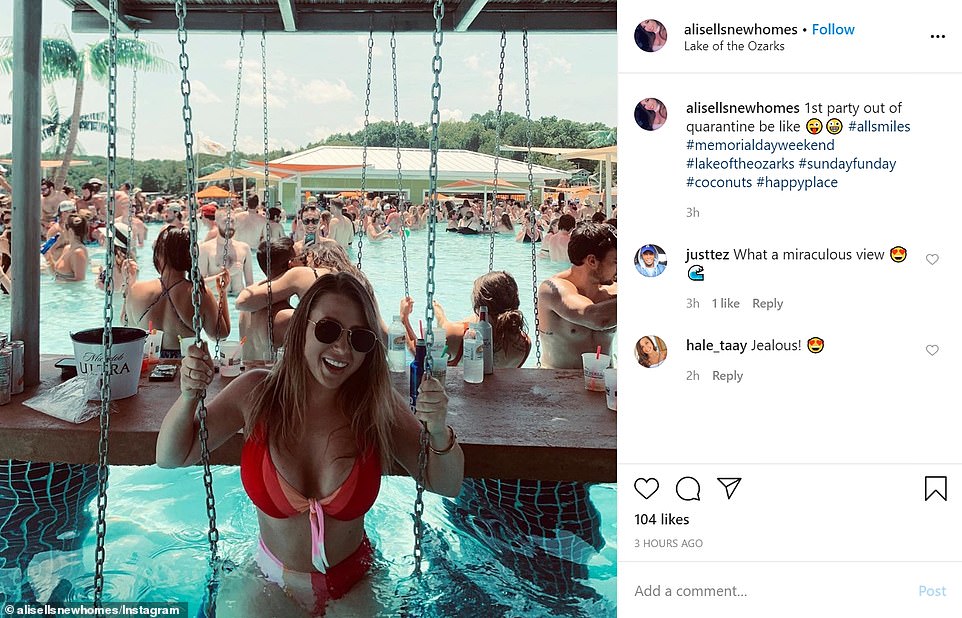 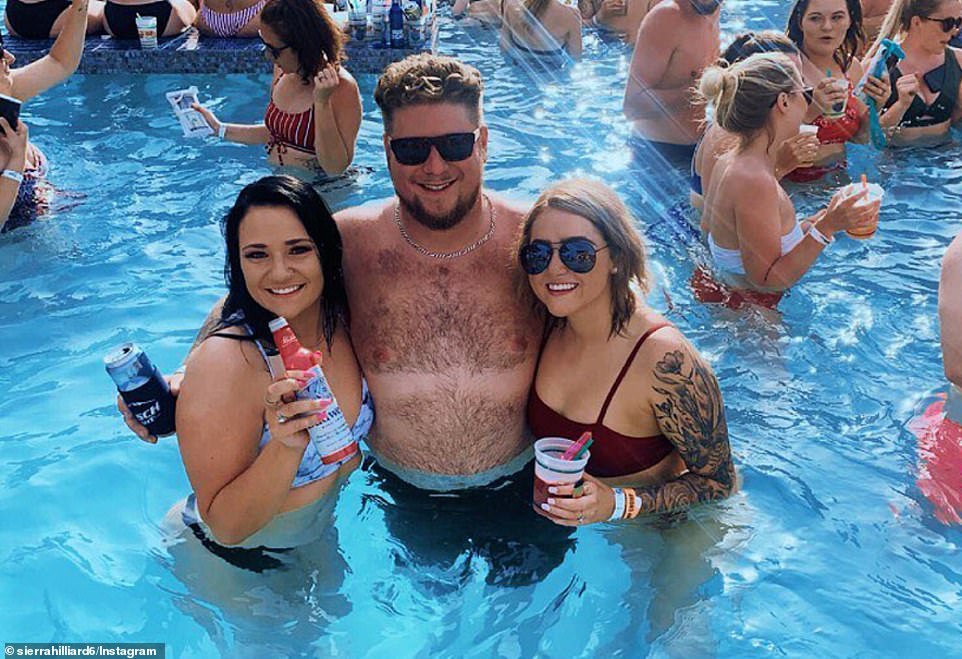 ‘It’s supposed to be one of the biggest Memorial Day weekends we’ve seen at the lake here in years,’ Bill Morgan, manager of Robins Resort in Lake of the Ozarks, told KTVI.

A local resident who filmed the action with his drone appeared to confirm the prediction was correct.

‘It definitely seems like more (traffic) than last year,’ Adam Kirk said. ‘It seems like everyone is having the same idea, to come to the lake to enjoy summer, because you can social distance at the same time.’

St. Louis County plans on reopening pools in early June but St Louis Mayor Lyda Krewson said what she saw in social media videos from the event was ‘deeply disturbing’.

‘It’s irresponsible and dangerous to engage in such high risk behavior just to have some fun over the extended holiday weekend,’ she said in a statement, KMOV reports.

‘Now, these folks will be going home to St. Louis and counties across Missouri and the Midwest, raising concerns about the potential of more positive cases, hospitalizations, and tragically, deaths. Deeply disturbing.’

The US is on track to surpass 100,000 coronavirus deaths in the next few days, while Europe has seen over 169,000 dead, according to a tally by Johns Hopkins University. Worldwide, more than 5.4 million people have been infected and nearly 345,000 have died. 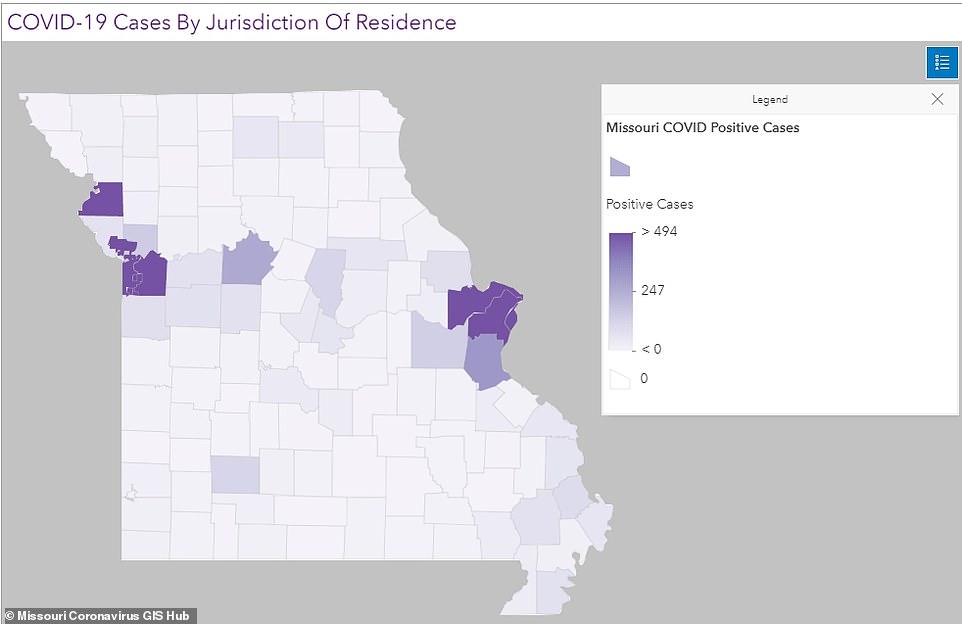 In Missouri there were almost 12,000 confirmed cases of COVID-19 and 681 related deaths on Sunday. In Osage county there were five cases 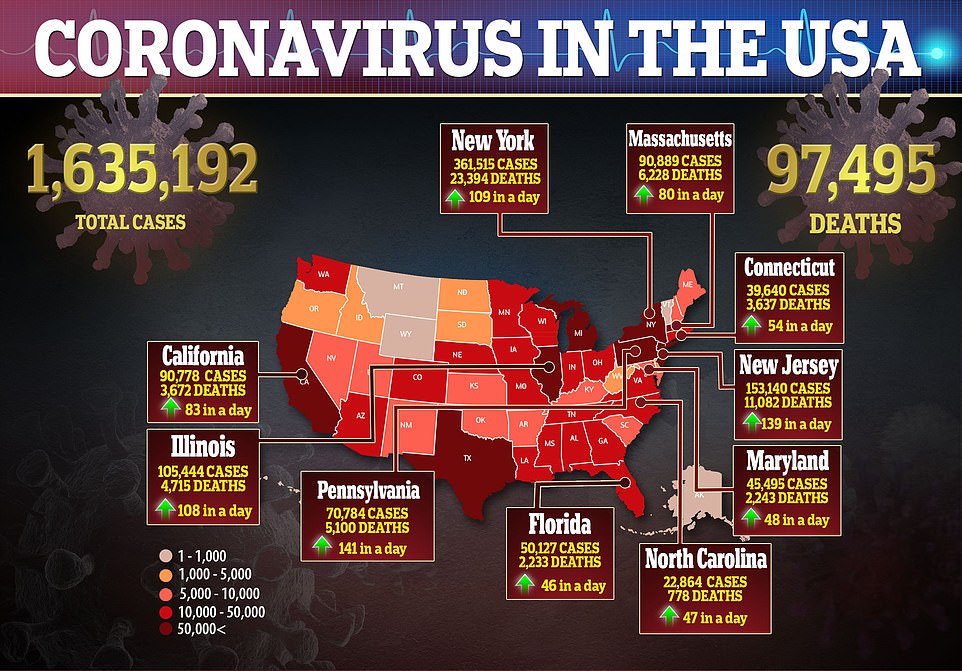 But in the neighboring state of Illinois there were more than 105,000 cases and 4,715 deaths

Sheriff’s deputies and beach patrols tried to make sure people kept their distance from others as they soaked up the rays on the sand and at parks and other recreation sites around the country.

In the Tampa area along Florida’s Gulf Coast, the crowds were so big that authorities took the extraordinary step of closing parking lots because they were full.

On Georgia’s Tybee Island, the beach was filled with families, bicyclists, beach chairs, games, swimmers and more. On a main drag, people lined the sidewalk at Wet Willie’s, a chain bar that sells frozen cocktails. Most stood close together — not nearly 6 feet (2 meters) apart — and none wore masks.

But at a nearby grocery store, staff members handed customers gloves and a number to keep track of how many people were inside at a time. Shoppers had their own masks.

Officials in California said most people were covering their faces and keep their distance even as they ventured to beaches and parks. Many Southern California beaches were open only for swimming, running and other activities.

At New York’s Orchard Beach in the Bronx, kids played with toys, and people sat in folding chairs. Some wore winter coats on a cool and breezy day, and many wore masks and sat apart from others.

‘Good to be outside. Fresh air. Just good to enjoy the outdoors,’ said Danovan Clacken, whose face was covered.

On the Sunday talk shows, Dr. Deborah Birx, coordinator of the White House coronavirus task force, said she was ‘very concerned’ about scenes of people crowding together over the weekend.

‘We really want to be clear all the time that social distancing is absolutely critical. And if you can´t social distance and you´re outside, you must wear a mask,’ she said on ABC’s This Week. 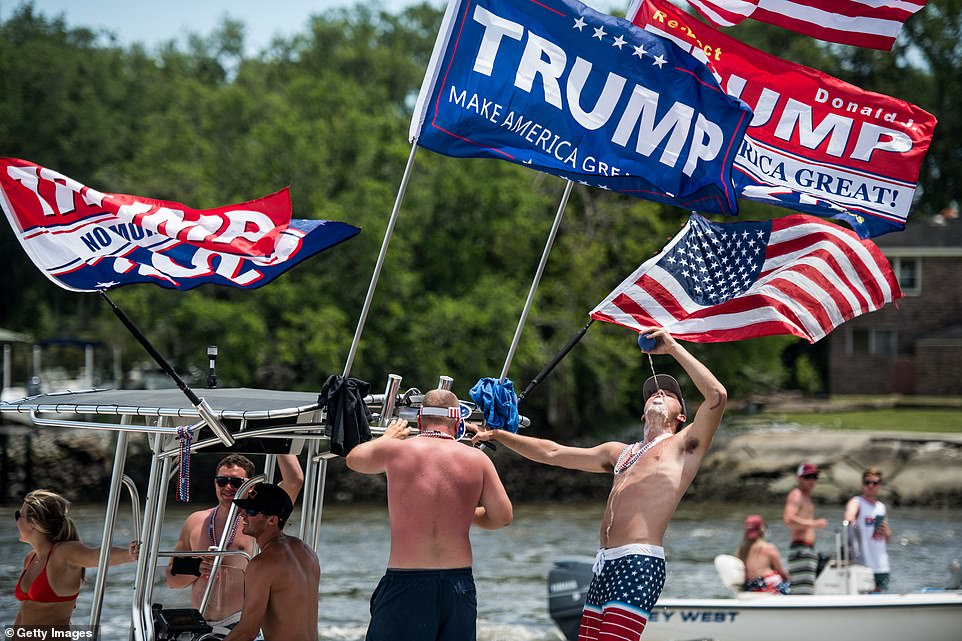 Revelers attend a Make America Great Again boat parade Sunday in Charleston, South Carolina. A Facebook post noted the event, which was scheduled to begin at the US Coast Guard station on the battery in Downtown Charleston and wind it’s way up the harbor, was hosted by OSR Marine, a marine supply store 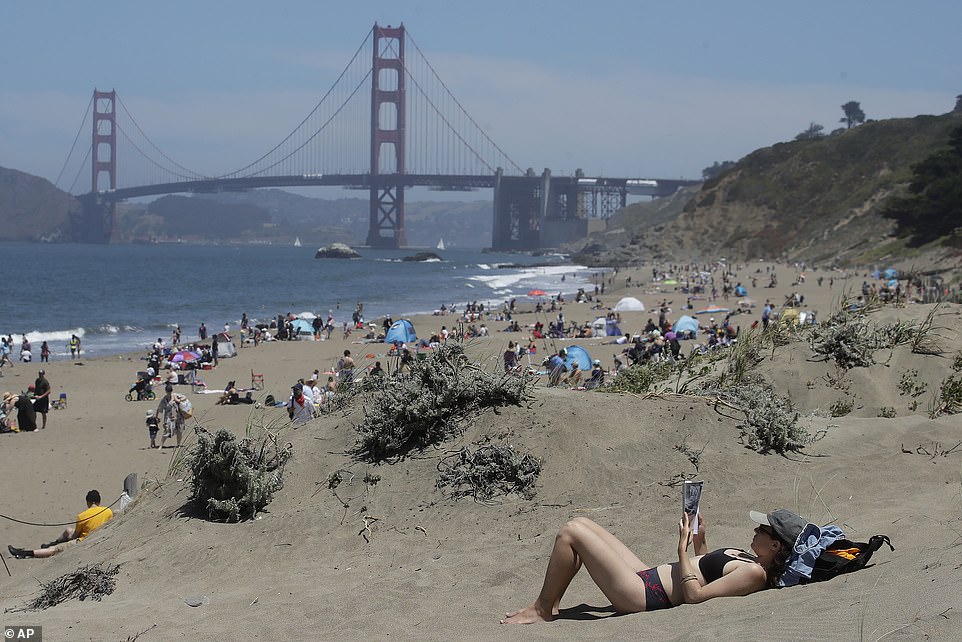