Six seriously ill people a day are being stripped of vital care funding and face being turfed out of nursing homes.

Every year 21,000 sufferers of degenerative and terminal conditions such as Alzheimer’s and Parkinson’s diseases are being reassessed over their care needs.

If they fail to prove their health needs are severe enough to qualify for financial help, the funding covering their nursing home fees is removed.

Every year 21,000 sufferers of degenerative and terminal conditions are being reassessed over their care needs (stock image)

In the worst cases, elderly people are forced to leave their nursing home and move somewhere cheaper, a Money Mail investigation found.

It comes after Health Secretary Jeremy Hunt unveiled a blueprint on Tuesday to transform care for the elderly.

He said pensioners were too often treated as ‘tasks on a to-do list’.

The Government is aiming to make £855million of efficiency savings from the NHS care funding budget by 2021.

Last night Tory peer Baroness Altmann, a former pensions minister, said: ‘Our social care system is broken – it isn’t fit for purpose. We are abandoning people who need help the most. For the fifth-richest economy in the world that is a disgrace.’

NHS continuing healthcare (CHC) is paid to those with complex, severe or unpredictable health needs. Recipients must go through regular reassessments.

Funding can be snatched away if their needs are deemed to be social – such as needing help with washing – rather than healthcare-related.

The sick resident must then pay care costs themselves if their assets are worth more than £23,250. Often this means selling the family home. 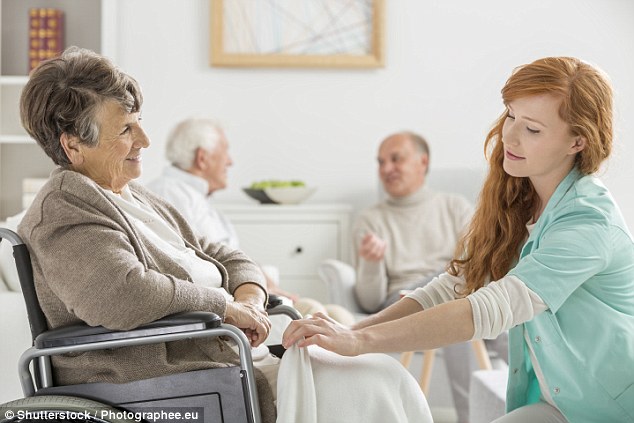 If they fail to prove their health needs are severe enough to, the funding covering their nursing home fees is removed (stock image)

The Money Mail investigation revealed that 2,211 British people lost their funding following a reassessment in 2016.

The figures, which came from NHS Trusts that replied to Freedom of Information requests, showed this was a near-300 per cent increase on the total for 2013.

Matina Loizou, senior policy adviser at Parkinson’s UK, said: ‘The NHS continuing healthcare system is in a shambolic state. People are left hopeless and without support when they are already at their most vulnerable.’

A spokesman for a regional clinical commissioning group where a dementia patient faced losing her CHC funding said it followed ‘national guidance’ for determining eligibility for care.