Sociology: Women with degrees six times more likely to have a child out of wedlock than 25 years ago

Women with degrees are now SIX times more likely to have a first child before they get married than they were 25 years ago, study finds

University-educated women are now six times more likely to have their first child before getting married than they were a quarter of a century ago, a study has found.

Sociologist Andrew Cherlin of the Johns Hopkins University in Baltimore studied data collected from three long-running demographic surveys undertaken in the US.

He found, today, 24.5 per cent of women with university degrees give birth before they get married — if they do at all — compared to 4 per cent back in 1996.

However, of those mothers, more than half were cohabiting at the time of the birth.

According to Professor Cherlin, the changes are likely driven in part by shifts in how society perceives both single parenthood and cohabitation.

University-educated women are now six times more likely to have their first child before getting married than they were a quarter of a century ago, a study has found (stock image)

TIPS FOR A HEALTHY PREGNANCY

Pregnancy health charity Tommy’s gives a list of actions which would have a positive impact on the health of a pregnancy and the future child if done before the mother stops contraception.

Smoking during pregnancy causes 2,200 premature births, 5,000 miscarriages and 300 perinatal deaths per year in the UK.

Be a healthy weight

Being overweight before and during pregnancy increases the risk of potentially dangerous conditions such as pre-eclampsia and diabetes.

Eat healthy and be active

A healthy mother is more likely to give birth to a healthy baby, and both will help maintain a safe body weight.

Speak to your GP if you are taking medication

Some medications may affect pregnancy, and it is best to check with a GP as soon as possible

‘I project that among college-educated women currently in their thirties who will ever have a first child, 18 per cent to 27 per cent will be unmarried at the time of the birth,’ said Professor Cherlin.

‘The place of marriage in the sequence of life events for emerging adulthood may be shifting among college graduates,’ he added.

His analysis indicated that the proportion of first births occurring outside of marriage is on the increase across all educational levels — with the greatest shift occurring among women who have college degrees.

Looking at women who had neither a high school degree nor a general equivalency diploma (GED), Professor Cherlin found that the overwhelming majority (86.5 and 76 per cent, respectively) were unmarried at the time of their first birth.

Women with a high school degree, meanwhile, were 61.8 per cent likely to have their first child prior to getting married — while the odds were 50–50 for women who had received an associate of arts degree.

‘For a growing number of college-educated young adults in the US, their family life courses will eventually result in marriage,’ said Professor Cherlin.

‘But, for increasing numbers, marriage would follow a first birth rather than precede it. This suggests a potential change in the role of marriage among college-educated emerging adults — although not necessarily a decline.’

The sociologist also found that of all women in their thirties who had their first child outside of marriage, those with university degrees were the most likely to be married at the time of their second birth.

Meanwhile, women with degrees are more likely to have the same partner for both of their children. 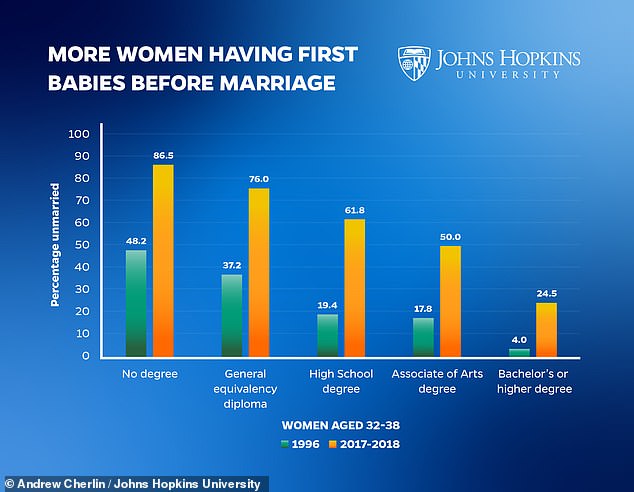 Professor Cherlin’s analysis indicated that the proportion of first births occurring outside of marriage is on the increase across all educational levels — with the greatest shift occurring among women who have college degrees, as pictured

According to Professor Cherlin, there a number of potential drivers behind these shifts — including the growing acceptance of both single parenthood and the prospect of unmarried couples living together.

Another reason may be that money issues — including college debt and the lower economic returns of a college degree — may be discouraging young adults from getting married as early as they used to.

‘Young adults may postpone or forgo marriage until and unless they have attained certain economic markers such as home ownership or an income comparable to the married couples around them,’ Professor Cherlin said.

He added that studies of women who have not been educated to a degree level have shown that when actual or perceived support for marriage declines, many women chose to postpone marriage but still have a child.

This same dynamic, he explained, could now be emerging among women who have been through tertiary education.

The full findings of the study were published in the journal Proceedings of the National Academy of Science.

WHAT IS THE DIFFERENCE IN MALE AND FEMALE BIRTH RATES?

There is an existing quirk of nature which means for every 200 births, 105 will likely be male.

This ratio has long puzzled population scientists who muse over the deep-rooted cause of it.

A prevailing theory is that more males are born to balance out the superior longevity of females.

Women have a greater life expectancy in most countries. In the UK, the Office for National Statistics reveals a newborn baby boy could expect to live 79.2 years and a newborn baby girl 82.9 years

And for every male that reaches the age of 100 – there are four women who also become centenarians.

A conclusive answer has yet to be widely accepted.

Modern pressures in some societies has worsened this ratio up to 118:100 following.

Added pressure of China’s single-child policy and the desire of parents to have a boy compounded the problem.