A cyclist survived a horrific knife attack and then walked into a surgery with a blade plunged into his skull and calmly asked: ‘Do you have a doctor free?’.

Blood-soaked Shaun Wayne, 34, shocked receptionists who could not believe their eyes as he stood in front of them in a room full of patients.

He had been cycling to work in Strand near Cape Town, South Africa, when he was attacked by two men, one of whom stabbed him in the head.

The knife, with a six inch blade, was stuck in his head as the men tried to grab his bike but incredibly Shaun fought back and managed to beat them both off.

Blood-soaked Shaun Wayne, 34, ad been cycling to work in Strand near Cape Town, South Africa, when he was attacked by two men, one of whom stabbed him in the head

Amazingly, he then got back on his bike and cycled half a mile with the knife sticking out of the side of his skull to the surgery of his local GP Dr Brendan Venter, 48.

Dr Venter – a former Springbok rugby player and a rugby coach – said: ‘One of our female doctors was on duty and she was called to a patient with a knife wound.

‘To say it was dramatic to see him with a knife sticking out of the side of his head was an understatement but he was very calm and lucid although bleeding a lot.

‘He asked very politely if we had a doctor free to see him.

‘The doctor decided that rather than wait for an ambulance she would drive him to hospital in her car herself and he asked if it was ok to leave his bike with us.

‘The patient was very lucky in that although the knife was plunged into his skull it bent on impact with the bone and the blade went down his face outside the skull.

‘He was very very lucky that the blade hit him in the wrong spot to kill him.

‘He fought for his bike back and rode to us as he knew where we were and we are his GP and when he got here he just walked in and calmly asked for help. 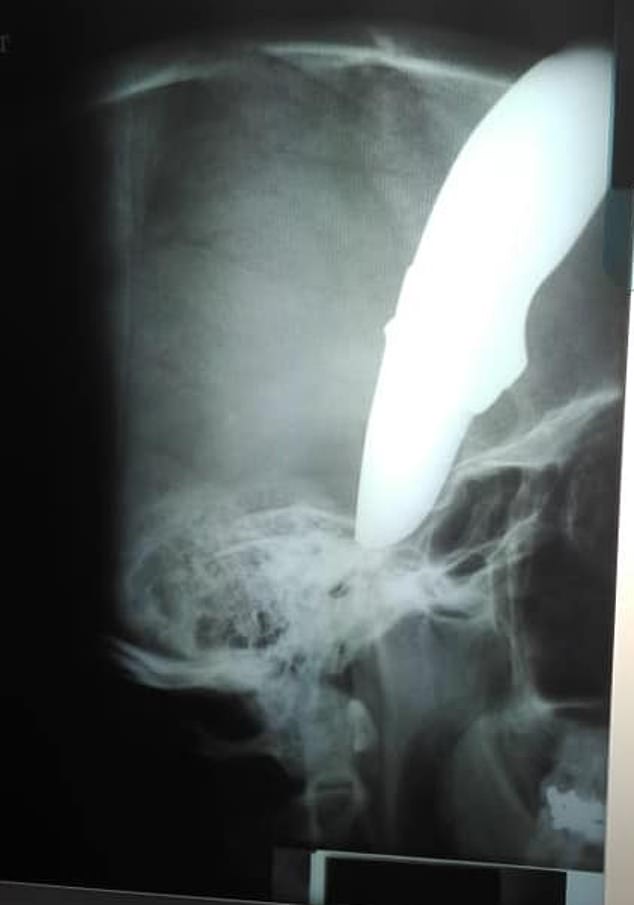 He survived and rode a mile to his GP who said: ‘The patient was very lucky in that although the knife was plunged into his skull it bent on impact with the bone and the blade went down his face outside the skull’

‘This is not something that happens every day and it seems it is a violent gang who have struck viciously a few times in the last few weeks and they will be caught.

‘It was not even an expensive bike and is one he cycles on to and from work each day. Why they used the level of violence they did is just beyond me.’

Shaun is the popular manager of Soo She, a local sushi and Asian restaurant on the Strand and he cycles to and from work every day.

He was rushed to the Tygerberg Hospital nearby on Monday afternoon and underwent emergency surgery with a spokesman confirming he was ‘stable’.

Friend Carl Block said on Facebook: ‘I was with him in the doctors. He rode himself there was was so calm and polite to the doctors saying: ”Can a doctor please help?”

‘This guy is an amazing person and I have known him for five years and was in tears last night and couldn’t sleep. I am asking you to all please pray for Shaun’.

The photographs have gone viral on social media with one showing Shaun stood bleeding in the doctors surgery and a second of an x-ray of the knife in his head.

The South African Police Service confirmed they are investigating the attack.

Former South African cycling champion Wimpie van der Merwe, 61, said he was attacked while with his cycling partner in exactly the same place a week before.

The former world champ said Elize Jansen van Rensburg, 55, probably fell victim to the same gang who pushed her off her bike breaking her hip, pelvis and coccyx.

He stormed: ‘Police do your work. You know where the hot spots are but you do little or nothing. How many cyclists must be attacked before you take this seriously?’.