Spain also saw the number of new coronavirus deaths rise by 378 today, slightly higher than yesterday’s 367, which was the lowest number of new deaths in over a month.

The new figures brought Spain’s total number of confirmed cases to 223,759 and the number of total deaths to 22,902.

However, research done by experts at a Spanish university has predicted that the country could have more than 2 million cases on Covid-19, almost ten times more than the official figures suggest.

Meanwhile, Spain’s King King Felipe IV was photographed yesterday wearing a face mask, gloves and his military uniform while visiting the quarters of the Spanish Royal Guard in Madrid. 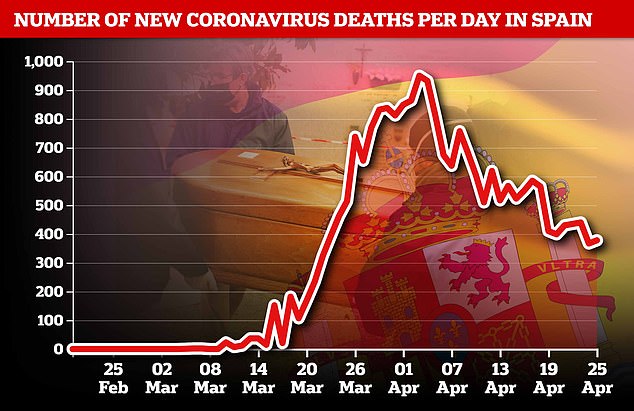 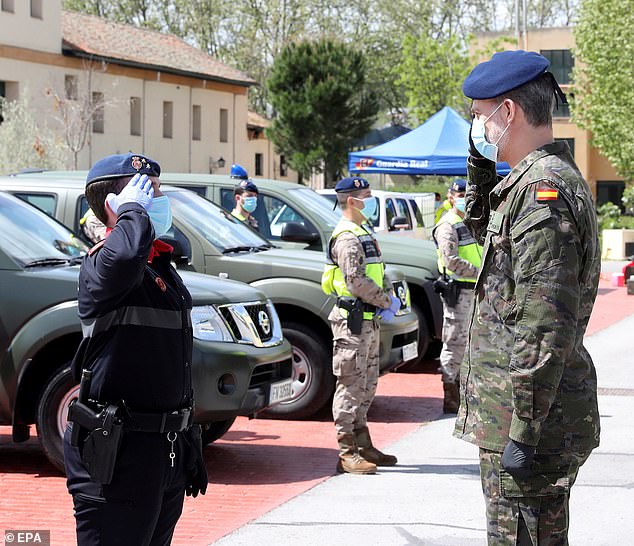 Pictures shared by the Spanish Royal Household  show him saluting members of the royal guard who are also wearing PPE, demonstrating equipment that they have been using to patrol the streets, such as drones, and inspecting the protective equipment they have been given.

During the coronavirus crisis, the Spanish Royal Guard have been undertaking a different role to what they are accustomed to.

The Guardia Real is the military unit that serves the King of Spain, King Filipe, but during the crisis they have been tasked with patrolling the streets, according to Euro Weekly News.

The have left their typical role that involves guarding and providing an escort for the Spanish royal family or visiting foreign dignitaries, and instead have been patrolling the streets of foot or on horseback, enforcing the country’s lockdown restrictions.

They have also been given the task of disinfecting buildings, such as care homes for the elderly or other communities classes as vulnerable, which includes convents of nuns in the at-risk age group.

The 1,500 members of the royal guard are taken from Spain’s Army, Navy, Air Force and associated military corps, according to Euro Weekly, and have found citizens are less uneasy when stopped by members of the royal than the police or Guardia Civil, who are more unpopular in Spain. 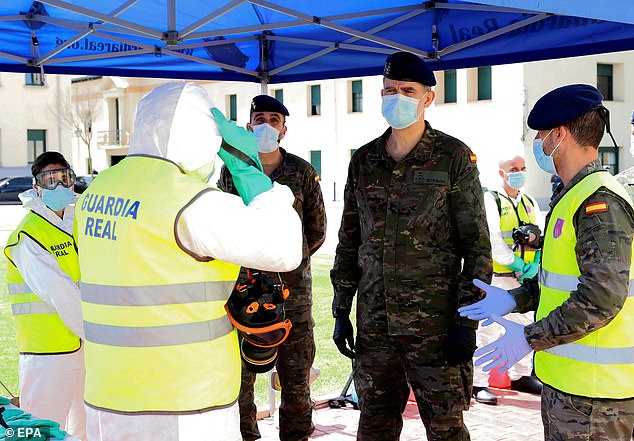 A study carried out at a university in Spain has estimated that more than two million people in the country could be infected with the coronavirus, around ten times more than the country’s official figures.

The coronavirus spread through Spain quickly and widely without being detected, especially among the elderly, experts have said.

While they stressed it was too early to carry out a detailed analysis, the experts pointed to the country’s sociable lifestyle and close ties between young and older family members as significant factors in the virus’s spread.

Spain has been one of the hardest-hit countries in the pandemic, with official figures putting it second only to the U.S. in terms of cases, with 223,759.

Experts at Universities throughout the country have been researching why the virus spread so effectively through Spain, and have found a number of different reasons behind this.

While Spain has the world’s highest coronavirus death toll per capita after Belgium, its mortality rate – the percentage of infected patients who die – stands at 10.4 percent, below other hard-hit nations like Italy, France and Britain.

‘The problem here is the size of the epidemic, the great quantity of infections which we had at the epidemic peak,’ said Fernando Rodriguez, a public health professor at Madrid’s Autonomous University.

Only the United States has more confirmed COVID-19 cases than Spain, although national variations depend greatly on the number of tests that are carried out.

A study carried out by the Polytechnic University of Catalonia estimated that more than two million of Spain’s 47 million people are infected. 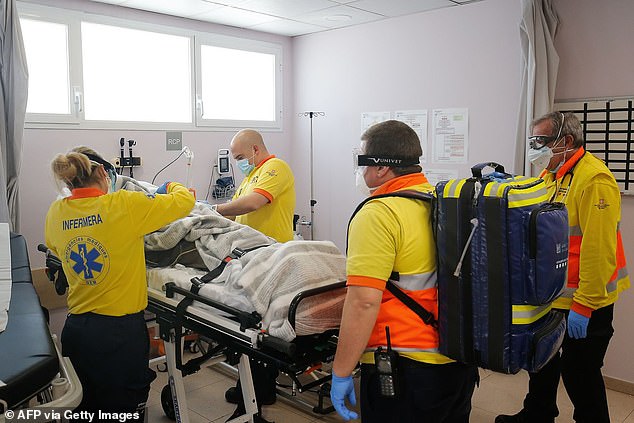 While it has a strong primary care network, hospitals have fewer beds than the European average, which forced them to improvise during the pandemic

The virus ‘circulated under the radar a lot’ before the government ordered a near total nationwide lockdown on March 14, said the head of epidemiology at Barcelona’s Hospital Clinic, Antoni Trilla.

‘The weather was fantastic during the last weeks of February and the first week of March and people were out on the streets, very close to one another,’ said Rodriguez.

This sped up the spread of the virus and ‘in very little time there was community transmission,’ he added.

Lifestyle could also have played a role in a country where people spend a lot of time outside in groups eating out, having drinks, attending religious processions, protesting or just going for a walk.

In Spain, as in Italy, ‘people hug and touch each other a lot, here people are constantly kissing, even at work,’ said Ildefonso Hernandez, a professor of public health at the Miguel Hernandez University in Alicante.

In addition, Spain has the most people living in flats of any European Union country, according to EU statistics agency Eurostat.

‘Our cities are built vertically, there is a lot of density and this can also facilitate the transmission of the epidemic,’ Rodriguez said.

While Spaniards have a long average lifespan and the country has a high number of seniors who are more vulnerable to the virus, its share of the population over 65 is lower than other nations that have suffered fewer COVID-19 deaths, such as Germany.

But older people in Spain have more contact with younger family members who can pass on the virus to them, Ildefonso Hernandez said.

‘Older people in northern Europe are more secluded and there is more family distance,’ he said.

In Spain, families ‘are much tighter, the interaction between youths and seniors is very high,’ he added.

It is common for several generations to live under the same roof in Spain. The average age a young adult moves out of the home in Spain is 29.5, compared to 18.5 in Sweden and 21.1 in Denmark, according to Eurostat. 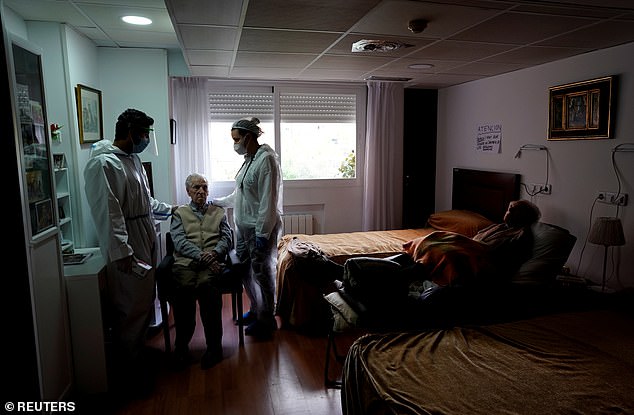 There have been a number of tragedies in Spain’s nursing homes during the coronavirus crisis, but the health ministry has not been providing figures for the number of deaths from Covid-19 in care homes

The health ministry does not provide figures for the number of deaths from COVID-19 at nursing homes.

But the governments of the two hardest-hit regions, Madrid and Catalonia, reported a combined total of around 8,000 confirmed and suspected deaths from the disease at retirement homes.

‘They are not healthcare establishments and were not prepared for this. That caused a fire of colossal proportions,’ he added.

Spain’s public healthcare system is ranked in the top 10 in the world by the World Health Organization (WHO), but it has suffered deep spending cuts since the global financial crisis more than a decade ago.

While it has a strong primary care network, hospitals have fewer beds than the European average, which forced them to improvise during the pandemic.

Like banks with little solvency ‘they did not pass the stress test,’ said Guillem Lopez-Casasnovas, an economist and expert on healthcare systems at Barcelona’s Pompeu Fabra University who has worked as an advisor to the WHO.

‘When you live day to day, you get the most out of what you have, but you don’t have enough muscle to respond to a major stressor like now,’ he added.