It is known for helping maintain a healthy gut, but now scientists have found kimchi could be used to reverse hair loss.

The Korean dish of fermented cabbage, onions, garlic, fish sauce and spices is already popular with health-conscious consumers and known for its probiotic qualities.

But research shows a kimchi drink sold in South Korea helps thicken existing hairs and grow new ones within weeks.

Researchers at Dankook University near Seoul studied 23 men, some in the early stages of hair loss and others visibly thinning on top.

They were told to have a kimchi drink before breakfast and at bedtime.

After a month, the average number of hairs had risen from about 85 per sq cm of scalp to 90, and then 92 after four months of drinking the liquid. 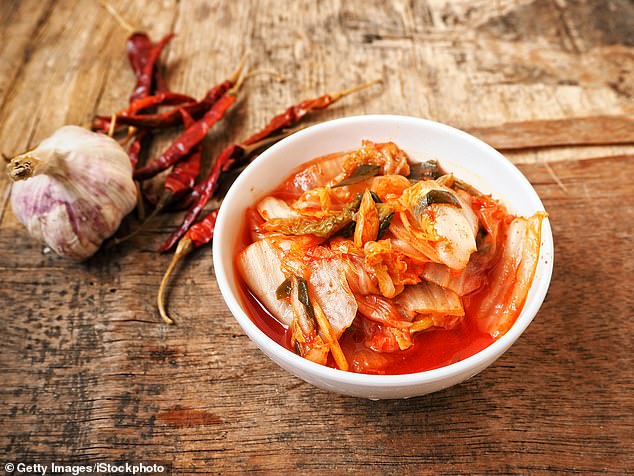 The dish consists of fermented cabbage, onions, garlic, fish sauce and spices and was taken in drink form by participants in the study before breakfast and at bedtime

The scientists said this was a significant increase that appeared to have reversed hair loss in most of the men.

In a report on the findings, published in the World Journal of Men’s Health, the researchers said: ‘Current drugs can have adverse effects so their use is usually temporary.

‘We found kimchi could promote hair growth and reverse baldness. It is a safer treatment strategy for patients.’