Plus-size model Hunter McGrady is back to showing off her curves in Sports Illustrated Swimsuit’s 2020 issue after making her debut in the magazine three years ago.

The 27-year-old, who has been dubbed the ‘curviest model ever’ to grace the pages of the iconic publication, was photographed by the brand’s longtime photographer Yu Tsai while on location in Bali, Indonesia.

The blonde stunner modeled a mix of high-fashion swimsuits and tiny bikinis for her sizzling new spread in the magazine, and according to the model, this is her best year yet.

Veteran: Plus-size model Hunter McGrady has returned to the Sports Illustrated Swimsuit issue with a sizzling new spread after making her debut in 2017 Strike a pose: The 27-year-old was photographed by the brand’s longtime photographer Yu Tsai while on location in Bali, Indonesia

In one stunning image, she can be seen posing in the surf wearing a black halter bikini with criss-cross ties that draw attention to her cleavage and hips. She is holding a large sunhat on her head and giving the camera a come-hither stare.

Another shows her kneeling in the water wearing a navy and white striped string bikini while her blonde beach waves blow in the breeze.

Hunter shared the bikini shot on her Instagram on Tuesday to celebrate the publication of the highly-anticipated issue.

‘I have been so excited for this shoot to be released,’ she wrote. ‘This trip was life changing and was so special to experience with the most special team. Sports Illustrated has given me so much and created so many incredible opportunities for me and I will forever be grateful. 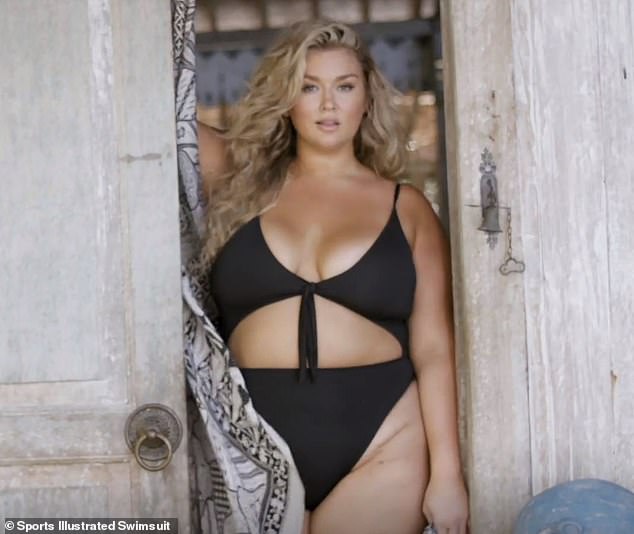 Model behavior: The size 16 model posed in a mix of high-fashion swimsuits and tiny bikinis for her sizzling new spread, including a cleavage-baring black one-piece with a cutout 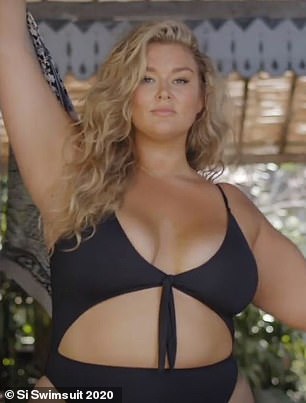 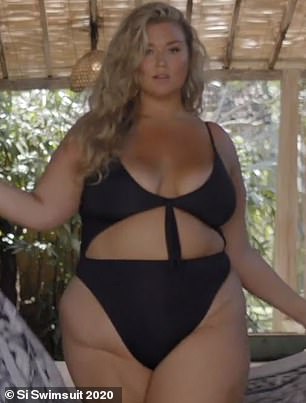 Feeling it: In a behind-the-scenes video of the shoot, the boundary-breaking beauty said she felt the ‘most confident’ and the ‘most beautiful’ while on set this year 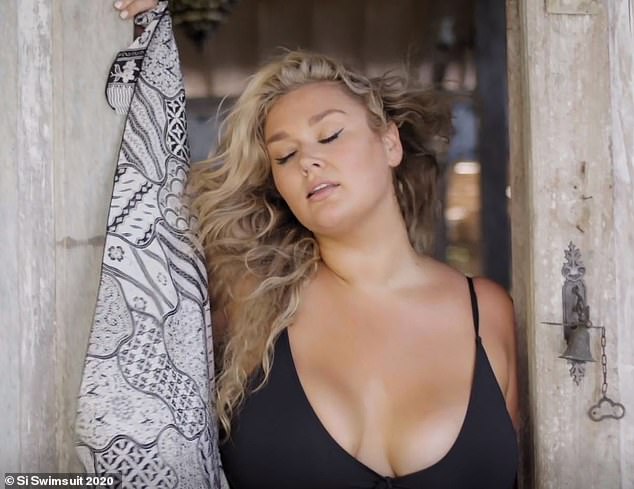 Goal: The body-positivity activist said she wont’ stop until all people feel represented

‘Every time the magazine comes out it is a “pinch me” moment. Thank you @mj_day for consistently being a catalyst in the way our industry is changing,’ she added, referring to SI Swimsuit editor MJ Day.

‘Thank you to the entire team for always making me feel my best on set, and always rooting for me in every endeavor.’

As part of her shoot, SI Swimsuit released a behind-the-scenes video of Hunter striking a pose on the beach in Bali. In the clip, she explained how her confidence has grown over the years and the importance of representation.

‘This year I feel the most secure, the most confident, the most beautiful. I just feel my best this year,’ she said. ‘The most challenging part of my career is dealing with people who don’t understand what I stand for. Before every photo shoot, I am literally praying — I am praying for the intention to inspire. 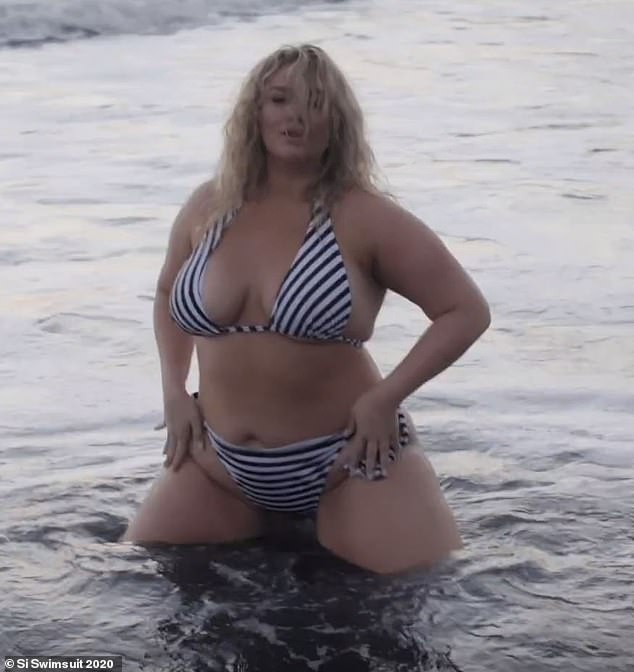 Looking good: Hunter kneeled in the surf wearing a navy and white striped bikini while posing for the shoot 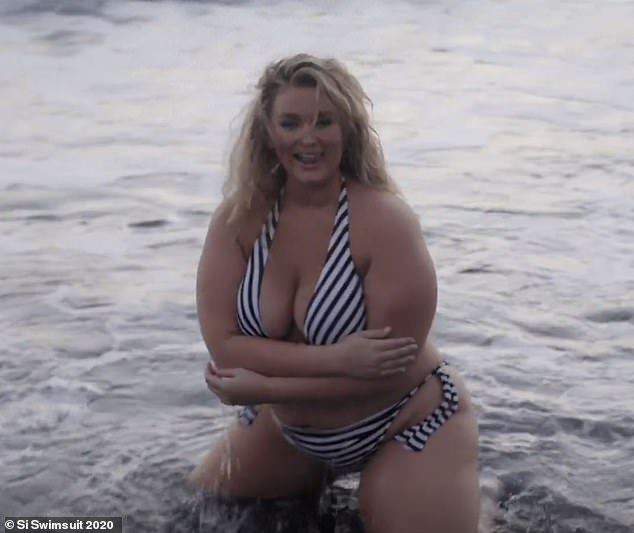 Beach babe: The blonde beauty had a smile on her face as her beach waves blew in the breeze

‘We see only one per cent of people, and I think it’s important to see real people for who they are — the honest, truthful, raw people that we look up to,’ she continued. ‘It just makes them feel more real and connected, and that’s all I ever want is to be connected to people.

‘Change is, of course, scary and, you know, people don’t want to see it, but I will not stop until we all feel represented.’

When Hunter started her career as a straight-sized model, she was told her 114-pound body was too ‘big.’ It wasn’t until she embraced her natural curves that she saw success in the fashion industry.

She made her debut in SI Swimsuit in 2017 as part of the brand’s model search, breaking boundaries as the second plus-size model to be featured in the issue after Ashley Graham. 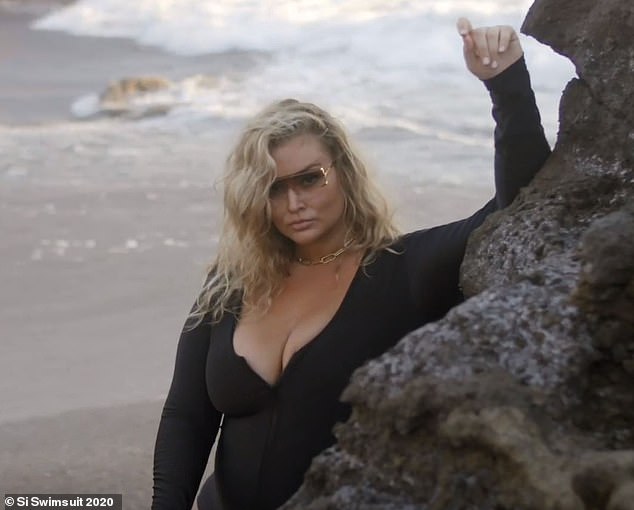 Teaser: In November, Hunter announced she would be featured in the 2020 Sports Illustrated Swimsuit issue while on location in Bali 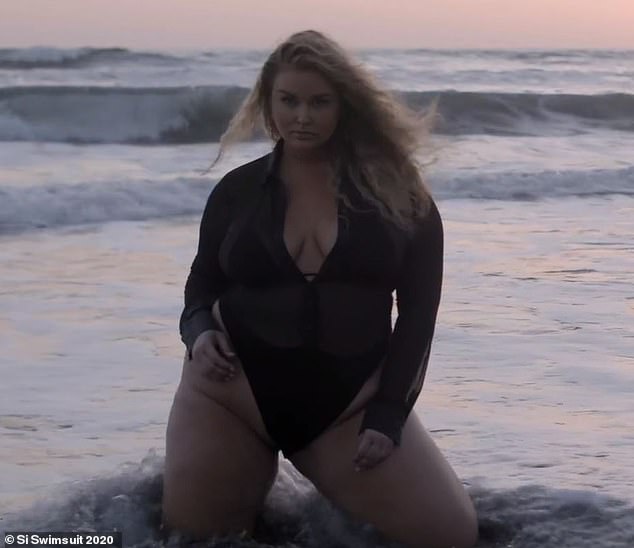 Going down in history: Hunter was dubbed the ‘curviest model ever’ to grace the pages of the magazine when she made her debut in 2017 as a model search contestant 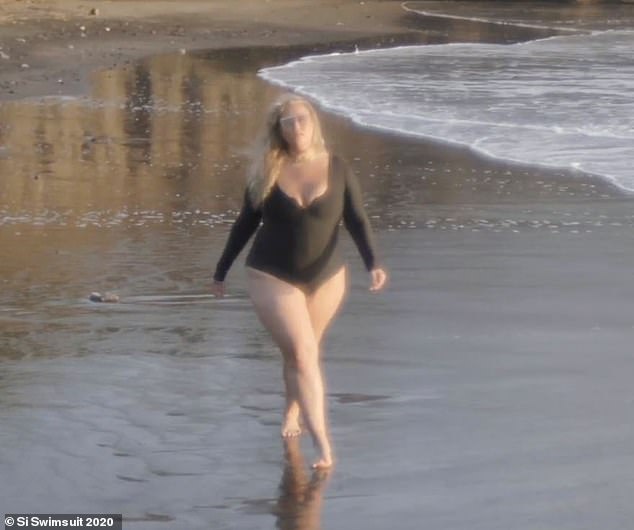 Breaking boundaries: Hunter was the second plus-size model to be featured in the issue after Ashley Graham

The proud size-16 beauty turned her naked body into a canvas for the publication’s powerful ‘In Her Own Words’ project that was featured in the 2018 issue, and she returned to the pages of the magazine for the third time in 2019.

Hunter was on location in Bali in November when she shared behind-the-scenes videos of her shoot to announce she would be featured in the 2020 issue.

When SI Swimsuit teased the veteran’s latest shoot on Instagram last week ahead its release, the brand included quotes from Hunter about what the magazine means to her.

‘SI has smashed the barriers that we have all been accustomed to for far too long. They have given the world an inside look at what it would look like if we brought inclusivity to the forefront,’ she said. ‘EVERY woman is fierce, we are to be valued, to be seen, and to be heard, and they have created space for just that. 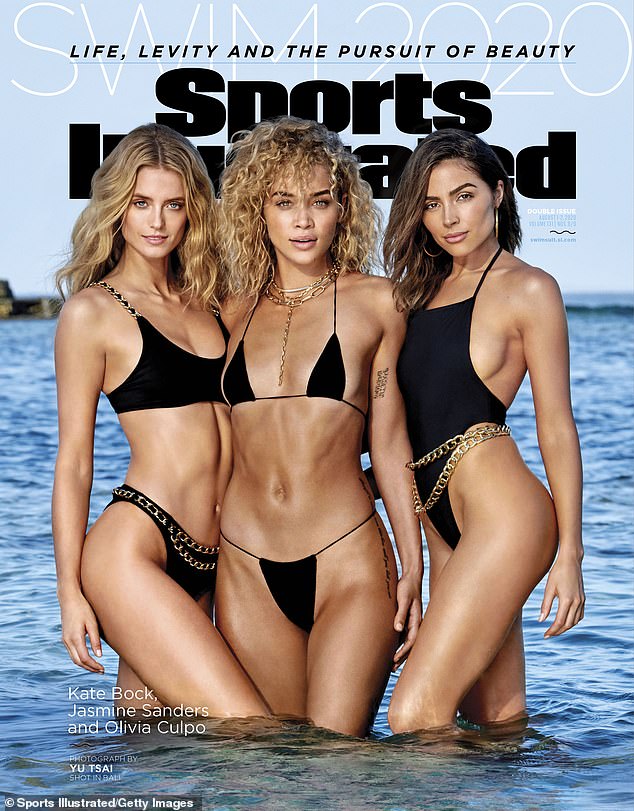 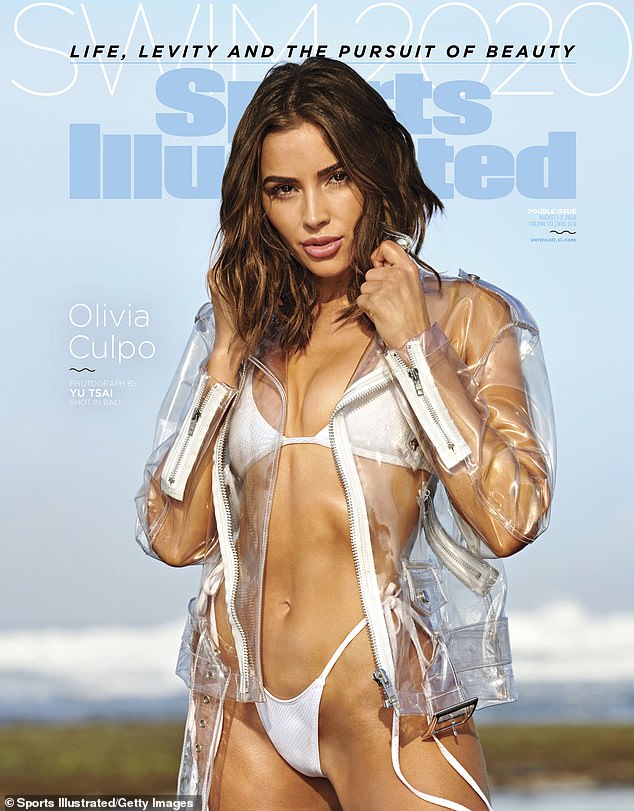 Super star: In addition to the group shot, they each got their own cover for the publication, with Olivia, 28, posing for hers in a teeny white bikini and a clear jacket 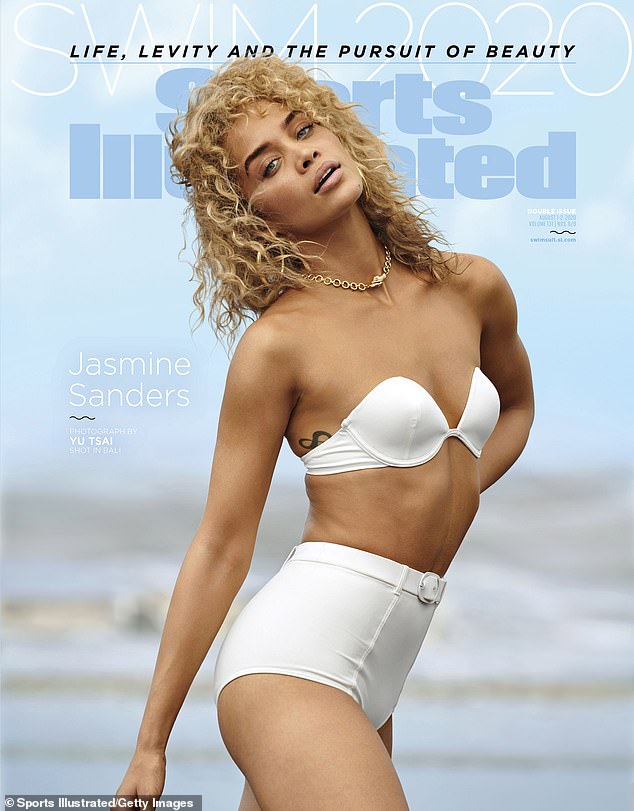 Strike a pose: Influencer Jasmine, 29, who is known as Golden Barbie on Instagram, looked stunning in a white high-waisted bikini as she posed for her cover on a beach in Bali 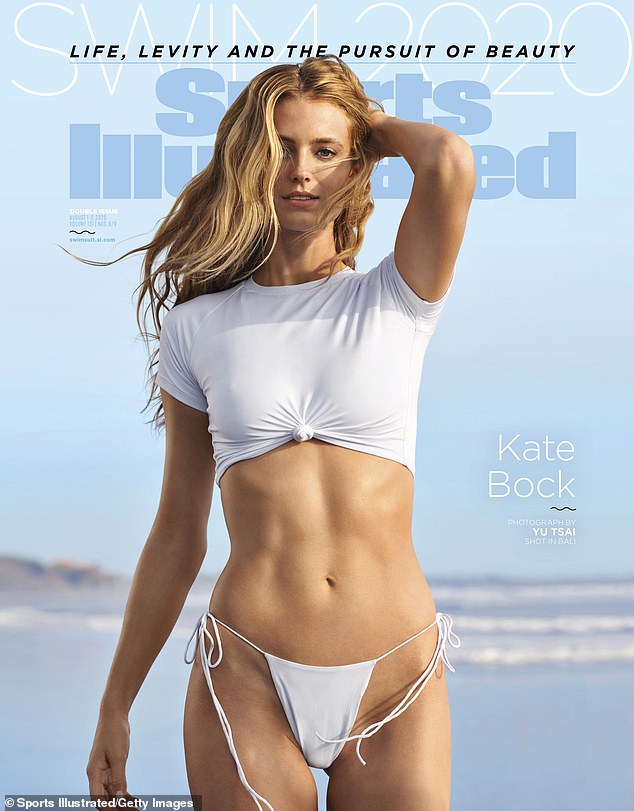 Seasoned expert: Kate, 27, made her debut in the publication back in 2013, when she was named Rookie of the Year, and she has since made numerous appearances in SI Swimsuit

‘This magazine has evolved beyond just taking beautiful photos, it is the changes that emerge from the audience seeing themselves reflected in those photos. To be a part of something so groundbreaking and history making is an absolute honor.’

SI Swimsuit made a splash last week with its cover reveal for the 2020 issue, unveiling not one, not two, but three stars posing on the front of the magazine.

Olivia Culpo, Kate Bock, and Jasmine Sanders were thrust into the spotlight when the publication revealed four different covers for its newest issue: a group shot with the trio, as well as individual covers for each of the three women.

Speaking about the decision to feature three women on the cover of this year’s issue, MJ told DailyMail.com in a statement that the models were all chosen because of their individuality, unique achievements, shared ambitions, and goals.

‘These three women that make up the 2020 cover are inherently unique in many ways, but a solidarity exists among them in terms of their ambitions, goals, and what they stand for,’ she said.